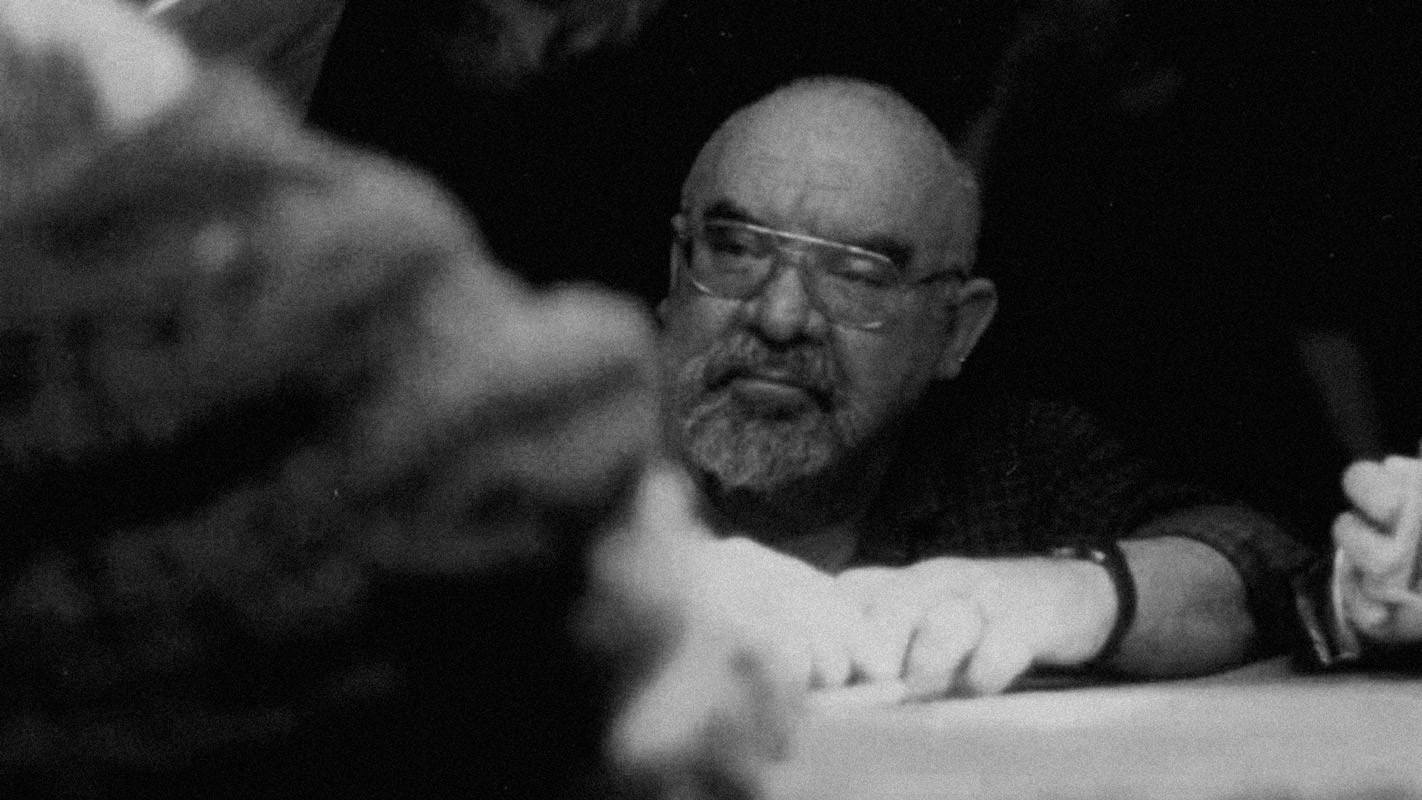 That was one of Stuart’s favorite phrases. He was a director that was somehow able to walk the incredibly fine line between Grand Guignol insanity and nuanced, subtle emotion. He was an actor’s director, caring first and foremost about the relationships on screen (and on stage), and was always the leader when it came to rolling up your sleeves and getting to work. He was the finest director I’ll ever get to work with, and a man very much deserving of his legend.

I had the great honor and pleasure of playing Herbert West in Stuart Gordon’s stage production of Re-Animator: The Musical. I remember my audition like it was yesterday, walking into composer Mark Nutter’s house, being incredibly nervous and trying to imagine the real-life Stuart. Is he dark and brooding? Would he be harsh and callous? What must a man that has made such frightening, bloody and gonzo work actually be like?

And then I met him, and anyone who has also had that pleasure is laughing at the previous paragraph. Stuart was one of the most soft-spoken, kindest, gentlest men I’ve ever met. But there was power behind his eyes, a thoughtful, burning intensity that never stopped churning. He was beyond collaborative, welcoming insight and “play” as we developed characters and moments and scenes, but always with a sure sense of what he wanted and what he didn’t. He was fiercely loyal, adding to his artistic family with every project and welcoming this band of miscreants into his life, his home, and his heart. He was generous, and caring, and fought for what was important to him, and what was right for the project.

Stuart came from the world of theatre, having founded the legendary Organic Theater Company in Chicago, and he carried the spirit of independent theatre into everything he did. We would do a group warm-up and play games as a cast before every single performance. This is extremely rare in professional theatre, but brought my cast mates and I closer than I’ve ever been with a cast in my life. Stuart himself ran the light board for much of the run of Re-Animator: The Musical; I remember fans would ask where Stuart was and when I’d point out that he’d been running the lights they’d be shocked: “why would someone like him be running the lights?” they’d ask. “Because he cares, and he wants every performance to be perfect.”

Stuart gave notes right up until the very end of the run, always wanting to explore new ideas, try new things, and keep the show fresh. I remember he came up to me five minutes before the very final performance of the show, after the entire 4 year run, and gave me a note. “Stu, it’s the last show.” “Yeah, so this is the last time we can try this.”

Stuart told me once that he knew that “they’ll inscribe Re-Animator on my tombstone,” but I want to urge everyone reading this to seek out his entire body of work. I’m biased, but I truly believe there is no other director - genre or otherwise - who didn’t have a single dud in their entire filmography.

His first film Re-Animator, was a perfect balance of comedy and horror, most scenes shot like a play, in long takes and with sleight-of-hand practical effects that are at once viscerally effective but also trick you into thinking you’ve just seen something you didn’t. He let the actors play, building moments that a lesser director would have edited to hell. Take the scene in the basement, where Dan and West are trying to find the re-animated Rufus, stalking him with a baseball bat under a swinging overhead light. Know why that light is swinging? So they can react to something moving in the dark, something we can’t see, something unpredictable. Pure stagecraft. Brilliance. This film is anchored by its performances: Bruce Abbott, doing a brilliant job as the audience proxy and the wavering moral center of the film, Barbara Crampton in a fiercely brave performance, David Gale as one of the all-time greatest cinematic villains, and of course Jeffrey Combs, whose perfectly nuanced mad scientist is one of the best horror performances of all time.

His follow-up to Re-Animator was From Beyond, a slimy, sexual, gonzo tale of a science experiment gone wrong, with iconic performances from Barbara Crampton, Jeffrey Combs, and Ted Sorel. The creature effects in this movie are astounding: think The Thing by way of Studio 54. Trippy, harrowing, and fearless.

Dolls I’ve called “deceptively good.” It’s a tale of killer dolls, which in the hands of lesser artists would be the stuff of simple, late night silliness. But Stuart was able to make something both fun and frightening, with a couple of moments that are among my favorite of his career. I remember while we were doing two show days of Re-Animator: The Musical, we would often order a pizza to the green room and hang out between shows. There was a TV on a stand with a VCR attached in the room and Stuart walked in with his VHS of Dolls and asked if we wanted to see it. He said, “I’ve always loved this movie and nobody seems to talk about it.” We got to watch it that night, with him giving running commentary. One of the highlights of my career and my horror fandom.

The Pit and the Pendulum: Grimy, angry adaptation of the classic Poe tale with one of the great Lance Henriksen performances.

Castle Freak: A film that doesn’t get nearly enough love about a monster who…didn’t get enough love. One of the great movie villains.

Space Truckers: Truly bonkers sci-fi film with George Wendt getting sucked out a porthole and Game of Thrones’ Charles Dance with a robotic penis.

Dagon: The third in his “Lovecraft Trilogy,” a fishy, ultra violent adaptation of The Shadow Over Innsmouth, with a facial flaying that ranks among the best deaths in cinema.

King of the Ants: a neo-noir crime thriller starring my Re-Animator: The Musical co-star Chris McKenna in his breakout role, the aforementioned George Wendt, and Daniel Baldwin in a genuinely excellent performance.

Stuck: An insane based-on-a-true-story tale of a nurse with a homeless man stuck and bleeding in her windshield, and her series of awful decisions to keep him there.

And of course let’s not forget Honey, I Shrunk The Kids, which Stuart conceived with longtime friend and collaborator Brian Yuzna. He once told me he wanted to create “an actual horror movie for kids,” and after hearing that I never watched the film the same way again.

I believe Stuart would want us to visit all of his films, especially the lesser-known ones. He took great pride in every single thing he created, and he built his legacy around being honest, staying true to his friends and collaborators, trusting his actors and his team to do good work, and being unafraid to take risks and make the boldest choice possible. We’re so lucky to have this body of work that he left behind, so that he can continue to entertain and inspire us long after he’s gone.

I have so much gratitude for Stuart, and the impact he had on my life and career. He took a risk on a complete unknown and handed me the reins of one of the most beloved characters in horror cinema. From day one he treated me as an equal and an artist, and up until about a month ago when we had our final lunch together, he remained a steadfast, caring, and genuine friend. I think I’ll miss our lunches more than anything. The man knew the best hidden restaurants in town, and could spend hours just talking about movies. At that last lunch we talked about Godzilla films. He smiled fondly, and said he always liked Rodan the best.

Stuart leaves behind a wonderful family: his wife Carolyn, who has welcomed me into her home as family, and who is one of the strongest women I’ve ever met, and his daughters Suzanna, Jillian, and Margaret, a trio of remarkable women themselves. I’m thinking of them right now.

I’ll miss you, Stu. Thank you for everything. What a life, and what a gargantuan legacy to leave behind. We were all lucky to share the planet with him for the time that we did. And in this moment of wondering, “What do I do? What do I say? How can one create art in a time like this?” I have to remember what Stuart would have said.

Graham Skipper is an actor, writer, and director, best known for originating the role of the singing Herbert West in Stuart Gordon’s Re-Animator the Musical, as well as the films Almost Human, The Mind’s Eye, Bliss, VFW, Beyond The Gates, and most recently as founder of the Rated R Horror Speakeasy. His feature directorial debut, Sequence Break, is out now on Shudder.