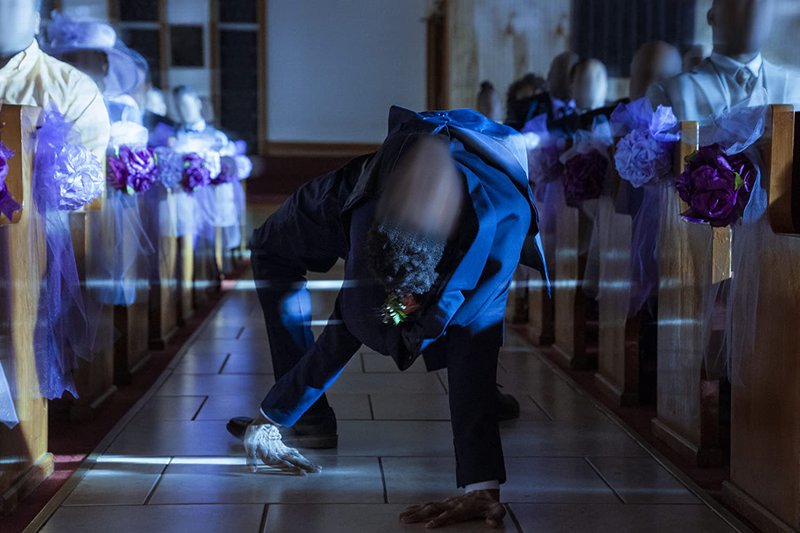 Welcome back to Monster Anatomy, a monthly column in which Meagan offers a peek behind the curtain at what goes into creating modern movie monsters. Read them all HERE.

Mike Flanagan recently took to social media to announce some of the filmmakers helming episodes of his upcoming adaptation of Christopher Pike’s The Midnight Club. Among them was director Emmanuel Osei-Kuffour, who debuted just last year with Black Box, a sci-fi horror movie part of the Welcome to the Blumhouse anthology series.

Black Box stars Mamoudou Athie as Nolan Wright, a single father whose struggles become compounded tenfold by a car accident that claims his memory. Between the loss of her mother and helping her father remember how to perform basic tasks, daughter Ava (Amanda Christine) displays a maturity far beyond her ten years of age. It’s that added pressure and responsibility on Ava that drives Nolan to seek experimental therapy from Dr. Lillian Brooks (Phylicia Rashad), so he can recover his lost memory and become a better dad. However, through Dr. Brooks’s experiments, Nolan often confronts a nightmarish figure crawling up from the darkest recesses of his mind.

That haunting entity, credited as Backwards Man, is played by none other than “Twisty” Troy James. Much like Javier Botet, James developed a reputation in the genre space for creating memorable movie monsters thanks to his unique physicality. The contortionist caught mainstream attention on popular TV series America’s Got Talent but has already amassed an impressive list of credits in horror. James’ talent for contortion contributed to scene-stealing performances in 2019’s Hellboy, Scary Stories to Tell in the Dark, Anything for Jackson, and more.

In Black Box, the bendy Backwards Man torments Nolan every time he slips into his memories, guided by Dr. Brooks’ therapy. At first, it’s only in glimpses. Nolan enters a foggy memory of his wedding day, but it’s crashed by the arrival of joints and bones cracking as a distorted figure crawls down the aisle. It wears an identical suit to Nolan’s. As Nolan spends more time in his subconscious world, the Backwards Man becomes more confrontational.

The Backwards Man offers a more abstract concept of a movie monster. He’s a physical manifestation of memories, or more accurately, memories of a consciousness fighting for control. As Nolan’s sense of reality spirals out of bounds, it’s revealed that the experimental and eponymous Black Box that Dr. Brooks implanted in Nolan harbors the imprint of her deceased son. It sparks a war for control within Noland’s mind.

Osei-Kuffour explains, “We always knew that Backwards Man was supposed to embody this distorted version of Nolan in this world. On the page, bones are breaking, and limbs are moving in reverse; there’s a chilling quality to that. I knew I didn’t want it to be digital. Everything you see in the film is practical. One of our producers, Lisa Bruce, found Troy James on America’s Got Talent. I saw him, and I knew, ‘That’s him.’ It was a joy to work with him. I worked with him before production and throughout to determine how to best represent Backwards Man on screen. He just so happened to be the exact same height as Mamadou, which worked out really well.” That last detail offers a serendipitous tell that the Backwards Man represents an alternate version of Nolan.

When you think of horror movie monsters, they invoke images of the fantastical or otherworldly – strange beasts and creatures that hunger for human flesh. It’s a vague word open for broad interpretation. The Backwards Man ticks off the monster boxes, just not in a conventional way. The entity wears a wedding suit, and his face remains obscured. The only distinction that makes him monstrous is the inhuman-like movements as he twists his joints and limbs in confounding positions and skitters towards the film’s protagonist. The unnerving sound design complements the motions. All of it triggers the uncanny valley and elicits a visceral reaction from the viewer.

Black Box plays hide and seek with identity and faulty memories. The Backwards Man effectively terrifies thanks to James’s physicality, but his true monstrousness is of a very different nature. Nolan sees him as this frightening figure because it’s his subconsciousness warning him of an intruder. These aren’t his memories. When Nolan defeats this monster, he looks into the mirror to see someone he doesn’t recognize at all: Dr. Brooks’ son.

The concept behind a monster’s design must take its environment and narrative purpose into consideration to be effective. The Backwards Man represents the most terrifying and familiar of all movie monsters – humans. It’s just filtered through the dreamlike setting of repressed memories. It helps that he’s played by one of horror’s most extraordinary monster performers.