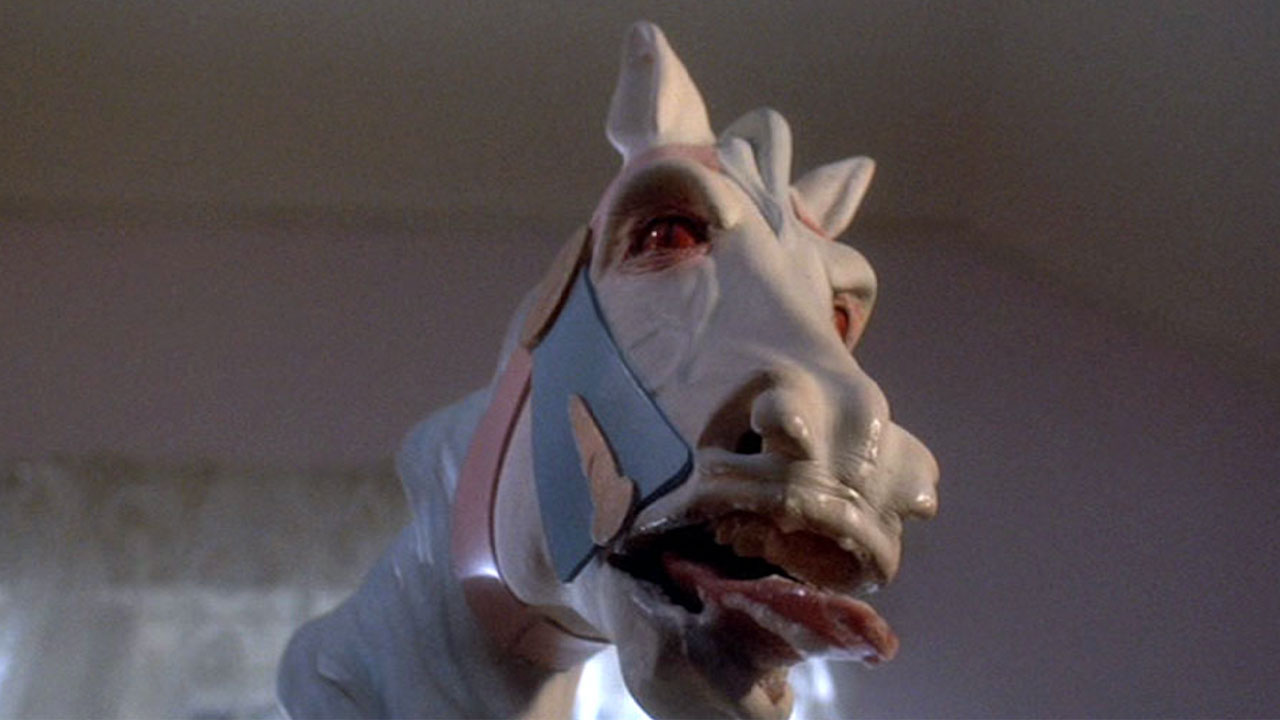 Now that I’ve had some time to clean out the cobwebs in my mind (thanks self-isolation!), I remembered that I was looking for something.

I was looking for a demonic rocking horse.

Three years ago, I began my quest for the rocking horse featured in Hello Mary Lou: Prom Night II (originally titled The Haunting Of Hamilton High).

I loved rocking horses as a kid and seeing the toy portrayed in this way totally disturbed me. Which is why I must find the prop.

My first plan of attack was reaching out to Prom Night II screenwriter (and re-shoot director) Ron Oliver. You might not recognize his name, but if you are a ‘90s kid, Oliver created your favorite TV shows. Oliver wrote and directed much of Are You Afraid Of The Dark?, the Goosebumps TV series, Animorphs, and more. He’s since gone on to have a very successful career writing and directing Christmas movies for Hallmark.

Ron unfortunately had no idea where to locate the rocking horse. He did provide some background on the prop, writing “It was based on a creepy rocking horse my sister had in her bedroom as a child and I always thought it would make a weird visual…” He was happy to report that he still has Mary Lou’s ring, though.

Next, I contacted director Bruce Pittman. Bruce also was not sure what happened to the rocking horse. But he did confirm that the movie was shot in Edmonton, Alberta in 1986 and that, “It was quite an adventure making the film.”

From there I went to the source: the props department. Assistant props master Richard Molnar did not know the whereabouts, but he did provide me with some possible theories on the missing prop. Molnar responded, “I believe there were (at least) two versions made of the rocking horse. The "non-creepy" version was likely liquidated in a “set dec sale” to recoup production costs. The “creepy” one (because it was novel, and more expensive to make) probably ended up with one of the “above the line” production personnel.”

(So, now, I’m looking for at least TWO demonic rocking horses. Maybe that will double my chances!)

Lastly, I tracked down Jim Doyle who was in charge of creating and operating the mechanical rocking horse. (Doyle also designed Freddy Krueger’s original glove!) Doyle wrote, “The last time I saw it was in Edmonton. I assume from there it went back to Toronto with all the film props. No clue beyond that. We did pickups later in Toronto but had no shots that required it.”

Although I still haven’t found the rocking horse, I have gleaned some important intel from my digital correspondence with the filmmakers.

Here are the facts that we know:

2) According to mechanical special effects supervisor Jim Doyle, the horse was most likely transported to Toronto with the film’s other props after shooting;

3) There were at least two versions created for the movie.

A huge thank you to Ron, Bruce, Jim, and Richard for taking the time to respond to my silly search, but I can’t help but wonder where this rocking horse went. If it still exists, it deserves to be in the FANGORIA Vault.

If you have any leads on where this raunchy, demonic rocking horse prop might be, let me know on Instagram @NatashaPascetta and @FANGORIA!

And if you haven’t seen Hello Mary Lou: Prom Night II, now is the time! (The Los Angeles Times called it “the Blue Velvet of high school horror movies.”) It’s streaming on Amazon Prime, Tubi, and Shudder. You can try Shudder free this month with the promo code SHUTIN.

Natasha Pascetta is the Vanguard of the Vault at FANGORIA. She oversees the podcast networks on FANGORIA and REBELLER and is the director/writer of the award-winning short film Road Trash and upcoming short Dark Ages.