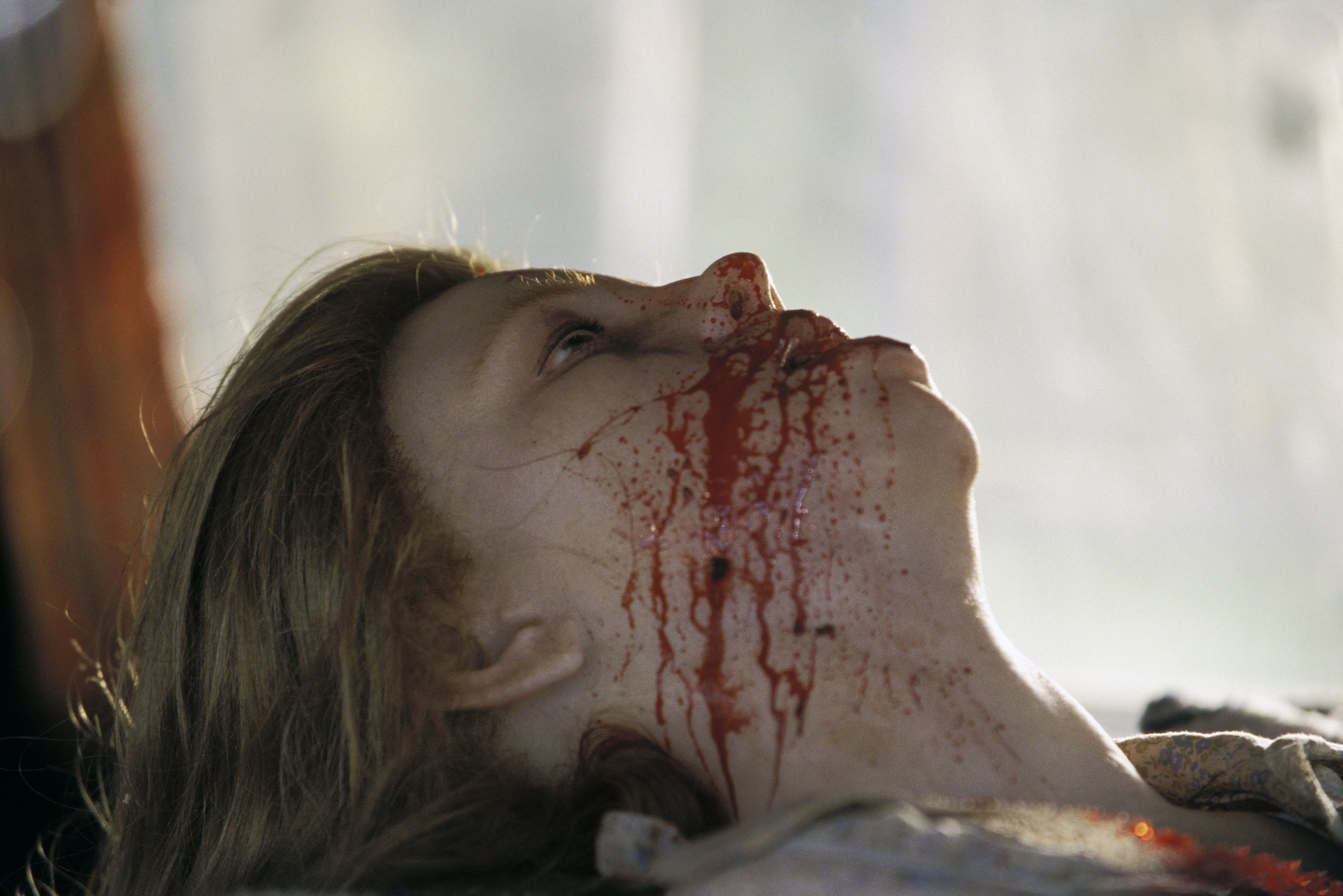 Lauren German takes a break in "The Texas Chainsaw Massacre."

Entering the new millennium in a creative rut, scary movies returned to a '70s mindset in the mid-aughts thanks to a crop of new anti-establishment directors — and, believe it or not, Hollywood’s own Platinum Dunes.

ollowing the terrorist attacks on Sept. 11, 2001, the horror genre found itself at a crossroads. In the eyes of many, filmmakers wouldn’t be able to ever top the profound terror and devastation seen in 9/11 news reports and witnessed firsthand by those on the ground. In an essay published three weeks later, and titled “This is Not a Movie,” The New Yorker film critic Anthony Lane synthesized the nationwide feelings: “As emergency services groped through the black-and-white fallout of the vanished towers, and as color drained from the scene, the horror was new. We couldn’t bear to look, and all we did was look.”

How could any American genre filmmaker possibly create something as horrific as the reality of 9/11? By and large, they didn’t even bother trying. But overseas, horror cinema had been consistently going for the jugular. In England, Danny Boyle was set to revive the zombie sub-genre with the legitimately terrifying and socially minded 28 Days Later… (2002), while French Extremity purveyors like Marina de Van (In My Skin, 2002), Claire Denis (Trouble Every Day, 2001), and co-directors Virginie Despentes and Coralie Trinh Thi (Baise-moi, 2000) were amplifying tropes like body horror, sex, and rape/revenge in savage fashion. In the States, however, scary movies were, well, anything but scary, having first been taken to task by Wes Craven’s brilliantly meta Scream (1996) and then ridiculously neutered by the Scary Movie franchise.

Who would have thought, then, that Michael Bay would be the first American filmmaker to challenge Anthony Lane’s sentiment? In early 2002, the hotshot blockbuster filmmaker behind summertime behemoths such as The Rock (1996) and Armageddon (1998) teamed up with former Wesleyan University classmate Brad Fuller and their mutual friend Andrew Form to launch production company Platinum Dunes. Their new passion project was dedicated to giving first-time filmmakers the chance to make reasonably low-budget genre fare for wide theatrical distribution. For their first film, the trio locked down the rights to arguably the scariest film ever made: Tobe Hooper’s 1974 classic The Texas Chain Saw Massacre. They hired music video veteran Marcus Nispel to direct, along with Nispel’s frequent cinematographer Daniel Pearl, who’d previously shot Bay’s award-winning 1993 clip for Meat Loaf’s “I’d Do Anything for Love (But I Won’t Do That),” as his director of photography; Pearl, as fate would have it, started his career in 1973 by shooting the original Texas Chain Saw Massacre for Hooper.

Released in October 2003, Platinum Dunes’ Texas Chainsaw Massacre opened with a staggering $28 million in its first weekend en route to $80 million total domestically, introducing a whole new generation of pre-avocado-toast-loving millennials to the kind of horror that had redefined the genre some 30 years prior. To get the buzz going, Bay initially shot an effectively old-school teaser in which a black screen is met with the screams of an unseen woman being chased for a minute-plus, before Leatherface’s chainsaw rips through the frame. It was a savvy attention-grabber rooted in the same audacious marketing mentality that powered the now-iconic teasers for horror standards like The Shining (that blood-flooded elevator). The film itself wasted no time shunning recent Hollywood horror’s tameness: Within the first 15 minutes, a traumatized hitchhiker blows a hole through her skull with a handgun she’s pulled out of her bloody vagina, leading to a wonderfully bold shot in which the camera zooms backward through the gaping head wound. All that follows is equally ferocious, one-upping the Hooper film’s understated brutality and snuff-film-like authenticity with vividly severed limbs and a larger-than-life villain turn by the great R. Lee Ermey as Leatherface’s elder ally.

That level of '70s-horror-influenced sadism being unleashed in over 3,000 theaters across America was radical. At the time, U.S. genre fans had to either procure imported DVDs or search for nearby art-house cinemas to watch films that even flirted with legitimate aggressiveness. American horror cinema was in a fragile state. The best that the genre had to offer came in the form of Gore Verbinski’s excellently crafted and cerebral remake of the Japanese sensation The Ring and Eli Roth’s delightfully splatter-heavy yet undeniably silly and scare-free indie darling Cabin Fever. Neither film, while certainly delivering the audience-friendly goods, was sturdy enough to inject horror with the necessary bluntness that the genre needed to reestablish itself as the premium nightmare supplier in a post-9/11 society. The same goes for Rob Zombie’s cartoonish 2003 debut, House of 1000 Corpses, which, despite resurrecting the “hillbilly horror” popularized in the '70s, served too many influential masters to signal any specific kind of resurgence. While memorable enough, these films didn’t have the figurative stones to rattle post-9/11 audiences back into a place of horror-driven shock. They were momentary diversions, not powerful catalysts.

Horror craved something akin to what Hooper and Craven brought in the 1970s, when America was in its post-Vietnam paralysis and films like The Texas Chain Saw Massacre, The Last House on the Left, and The Hills Have Eyes woke cineastes up via no-holds-barred horror that both genuinely frightened viewers and provided catharsis through sneakily inserted political and social commentary. Although Platinum Dunes’ Chainsaw remake doesn’t retain Hooper’s film’s period-specific paranoia towards the annals of under-served Americana, it’s certainly robust in the hardcore horror department. And that’s all that Hollywood, having been lulled into horror doldrums by toothless wide-release films like Darkness Falls, Halloween: Resurrection, and Eight Legged Freaks, needed to right its course.

By late 2005, American horror cinema had finally found its voice again. Credit the wave of brutal and unrelenting films that echoed the films made by the mavericks of the ‘70s, if not in overall quality then at least in nihilistic intentions, the prime examples being Rob Zombie’s The Devil’s Rejects and Eli Roth’s Hostel. Concurrently, Hollywood studios were also releasing foreign-made horror breakouts that matched Zombie and Roth, namely Frenchman Alexandre Aja’s High Tension and Aussie duo James Wan and Leigh Whannell’s Saw, both of which were given wide releases stateside thanks to Lionsgate. FrightFest co-director Alan Jones, who was then writing for Total Film, lovingly dubbed these filmmakers the “Splat Pack” in 2006; that same year, New York critic David Edelstein would not so lovingly brand their films “torture porn.” Yet those seminal films were all two years late to the party kick-started by Platinum Dunes’ The Texas Chainsaw Massacre.

Although it was bigger in all production aspects than the Splat Pack’s work, Platinum Dunes’ hard-R, violent-as-hell Massacre wasn’t all that different in spirit. Prior to unleashing Leatherface onto a new generation, Bay was coming off of Bad Boys II, a $273-million-earning juggernaut that marked his fifth straight directorial effort to earn $140-million-plus at the box office. Populated with beautiful people, widespread explosions, and excessive sun flares, Bay’s films were high-class junk food, playing safely by pitching shiny object fastballs down the middle to audiences looking to do anything but challenge themselves. With The Texas Chainsaw Massacre, Bay and his collaborators ignored the status quo, abandoning the funhouse vibes of Joel Silver’s then-prolific Dark Castle’s glossier remakes (House on Haunted Hill, Thirteen Ghosts), significantly lowering mainstream horror’s typical budget (Thirteen Ghosts, for example cost $42 million; Texas Chainsaw cost $9 million), and harkening to an era where the prime objective was to keep horror lean, mean, and ruthless. It’s no wonder that most reviews for Platinum Dunes’ debut read as if the film was an affront. Roger Ebert called it “a contemptible film: vile, brutal, and ugly.” Dave Kehr of The New York Times wasn’t much kinder: “Rather than exhilaration, this bilious film offers only entrapment and despair.”

During a 2007 interview with Variety, Rob Zombie described his style of horror by saying, “My movies are supposed to be shocking and horrible — I don’t want them to be fun.” Four years earlier, critics like Kehr and Ebert certainly didn’t have any fun with the Bay-guided Texas Chainsaw. Eighty million dollars’ worth of ticket-buyers, however, sure did. And soon after, Hollywood took notice. Looking to repeat New Line’s Chainsaw-fueled, gore-soaked Halloween season triumph, Lionsgate released the first Saw, a tiny $1.2 million Sundance Film Festival breakout, in October 2004; a whopping $104 million later, Saw proved that audiences’ bloodlust triggered by Platinum Dunes’ Chainsaw was officially big business. In December 2005, Dimension Films bravely opened Australian filmmaker Greg McLean’s Wolf Creek, another one-time inconspicuous Sundance hit that’s full of Texas Chainsaw’s backwoods DNA, in over 1,700 theaters. The next year, Fox Searchlight recruited High Tension director Alex Aja to remake The Hills Have Eyes, a grisly reboot that follows Bay’s Chainsaw playbook almost to the tee, right down to similarly cut and scored trailers. In 2007, the remake train first gassed up by Platinum Dunes reached its divisive zenith with Rob Zombie’s Halloween, and two years later, full circle status was achieved with the remake of The Last House on the Left, whose straight-faced barbarity had more in common with the new Chainsaw than Craven’s original Last House.

Throughout those years, the zeitgeist was restless. Conditioned by the news for the worst, American audiences needed an outlet. And so did filmmakers. Appearing on the Fox News program, Your World with Neil Cavuto, in April 2006, Eli Roth explained the deeper connection between classic in-your-face horror and the headline-dominating output from he and his peers.

“If you talk to all the horror directors of the '70s, they say that they were making films as a reaction to watching Vietnam on television,” said Roth. “Now, thanks to George Bush, Dick Cheney, and Donald Rumsfeld, there’s a whole new wave of horror movies. We’re in the war now and you feel like it’s never going to end.”

The War in Afghanistan kicked off in October 2001, a joint strike by the United States and British troops targeting Taliban and Al Qaeda in Afghanistan, in response to 9/11; in March 2003, the Iraq War, which lasted for eight years, began similarly, with American and British forces bombing the hell out of Iraq.

In that context, Platinum Dunes’ The Texas Chainsaw Massacre was the preemptive post-9/11 strike, prefacing Roth and his ilk, that the horror community didn’t even realize it needed. To repurpose Anthony Lane’s words, mainstream horror felt new again.