Adventures In Development Hell: A Chat With Matt Greenberg, Part 2 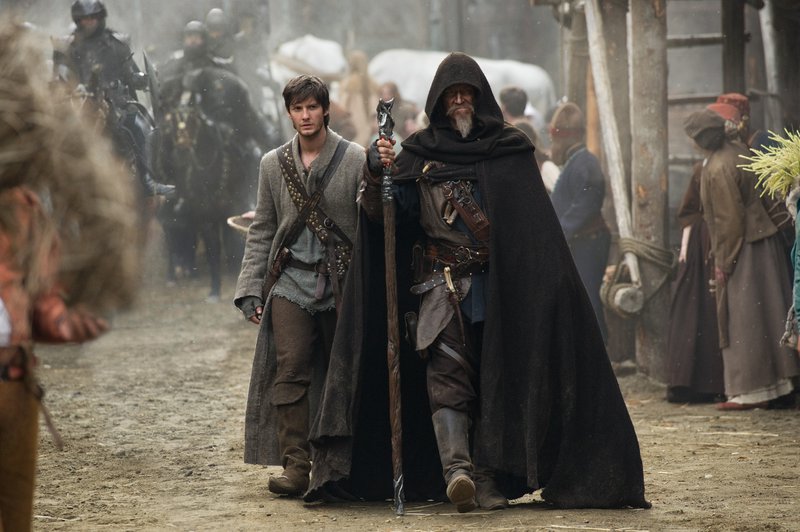 Ben Barnes and Jeff Bridges star in SEVENTH SON, which had a radical transformation from script to screen.

The last time, Matt Greenberg and I chatted about his work on the Crow franchise, his attempts to help bring Hong Kong horror cinema to the United States, and working under Bob Weinstein at Dimension. We pick back up with his shot at the Hellraiser franchise and dive deep into the waters of unproduced material…

FANGO: So, you were telling me, you almost rewrote Hellraiser 4…

Matt Greenberg: Hellraiser 4 was really interesting. The original script they gave me was almost an anthology film. It was three separate stories about the history of The Box. I know that’s a little like how the movie ended up, but this was different. Keep in mind, having taken the audiences through 1 to 3, they were like, ‘How can we make 4 different?’ And I really loved this original script. There was something about the anthological nature of it that really magnified the legend of The Box, the Lament Configuration, the Cenobites and everything. Each story was oddly moving in its own way. What happened was… at a certain point in development — late in development, I think they may actually have been in pre-production — someone thought, ‘Oh, my God, this feels too much like an anthology!’ So what they did was they tried to rearrange it so it starts in the future, flashes back, blah blah blah. I don’t think that works as well. Because the progression you saw in the original script, from 18th century France, to the present, to the future, made a weird kind of sense. The thing that’s really interesting about Clive Barker is — you certainly see this in Hellraiser, you even see it in Candyman, though he didn’t direct it; that was Bernard Rose — but there is a very atmospheric, very specific tonal sense to these movies. And if you go too far afield from that, that’s when a film goes off the rails. And that’s what I feel like they did. But the script captured that.

FANGO: I’m always fascinated by stories about the stuff that almost gets made and then falls apart, because I’ve seen that happen so much myself, and there are so many great unproduced screenplays bouncing around out there. Tell me about some of yours?

MG: We had a project at Dimension called Allied Forces that I wrote back in the ‘90s, that was a science-fiction war film that was weird. Rogue One is the closest they have come to it. We had brilliant artists working on it, amazing artwork, and it was going to be a sci-fi film, unlike anything people had seen before. I did an adaptation of The Screwtape Letters years ago. That was one of my favorites, but that was a hard one to crack. There was a lot of disagreement about what people wanted. Some people liked it, some people hated it. C.S. Lewis is one of the first writers I ever read, and Screwtape Letters is one of the things that I just absolutely adored. John Cleese did a wonderful book-on-tape reading of it that’s just pitch-perfect, and the idea at the time was doing Screwtape with John Cleese as Screwtape. That didn’t work out.

Me: Since Screwtape is an epistolary novel, what was your approach to adapting it?

MG: Oh, dude. It was set in the present day, and I had a Terry Gilliam-esque take on it, the way Hell works, the weird, sort of Brazil-like nature of Hell, and how it was mirrored on an equally bizarre way on Earth. It was trying to get the balance of the humor and the profound human commentary - which was Lewis’, not mine - so it was sort of my Terry Gilliam-wannabe discourse into literature… You need a visionary director. When I wrote it, I was thinking that Terry Gilliam would direct it. You need that kind of visionary.

FANGO: What’s your favorite personal project that’s never gotten made? Say Steven Spielberg comes to you tomorrow with all the money in the world and he says you can have it and he’s gonna produce for you, what is it?

MG: That’s a really good question. I’ll tell you something… [laughs] Can I pick two? [Laughs] On the horror side, I wrote a script called The Silent, which was sort of my homage to the creepiness of silent horror films. It’s set in the modern-day, but it’s sort of The Ring meets The Cabinet of Dr. Caligari. The script had a lot of problems, but it was one of those things where the people who didn’t get it didn’t get it, but the people who got it really got it. That was a cool thing. I still own it. I’ve had a couple of people approach me about it over the years, but nobody’s ever bought it. Back in the day, people offered to option it and at the time I didn’t want to go down that road. I’m partial to it because it’s a movie for horror buffs. But it’s very ambitious. Part of the problem is I tried to do eight things at once. It imagines a D.W. Griffiths-like figure who, in his last film, was shooting down in Mexico and the whole crew disappeared in 1928. Then 80 years later, the camera is discovered and it has some footage in it.

I had a project that was based on a Japanese short story that was going to be a movie, but then that fell through, and I ended up selling it to Disney+ as a TV series. I wrote the pilot. But Disney ended up passing on it, and I’d like to go back to the movie version of it. If you’re a fan of Miyazaki, especially Spirited Away, imagine the live-action version of that but with a more Western kind of fairy-tale feel to it. It’s called Night Market. We still might be able to set it up elsewhere, producers are talking to various places. If we’re going for three, there’s one I did years ago called Primordia, which was based on an old property. It was a huge, insanely expensive movie but it was one of the more imaginative things I’ve ever written. It’s sort of Reign of Fire on steroids.

Another one – you know what was the heartbreak of my time? I did an adaptation of Neil Gaiman’s Books of Magic. That got close and then it fell apart, and it was so sad because I met with Neil, and Neil really loved my initial drafts. But then it went into development Hell and fell apart.

FANGO: Of the stuff that’s made it to the screen, what’s been the most radically different script to screen?

MG: Seventh Son. It was originally based on a series of novels called The Wardstone Chronicles, the first of which was called The Spook’s Apprentice. The novels were brilliant. They were written by an English guy who lived in, I believe, Lancaster, and they’re very grounded period novels about the Pendle Hill Witches. My own background, in addition to being into horror and fantasy, I was a Medieval Studies major. So what really struck me about these novels was that, first of all, they’re incredibly scary. It was the first time I was scared of witches in a long time. And they were so evocative of England during the period. When I wrote my adaptation - I have a big rule with adaptation. I try as much as I can to stay within the spirit of the source material. You can’t copy it verbatim. It doesn’t work like that. If you’re going to change something, change it in the spirit of the source material. I felt really proud of the script. it was then called The Spook’s Apprentice, and The Spook was a reference to this guy who’s a local exorcist. I felt really good about it. Tim Burton was going to direct it, Johnny Depp was interested; this was back in like 2007, back when Burton was at his height and Johnny Depp was still very much at his height. Then the strike happened and things started falling apart. Tim Burton dropped out, it went to another director, that director decided he wanted another writer. Then he fell out, and it went to another, and another… And it changed studios. Originally it was at Warner, then it went to Legendary. And what they ended up doing was going so far afield of my script — and the books — it’s almost unrecognizable. I’m not dissing anyone here — this was their choice — but they took it in a much more sort of fantastic, huge direction with loads of creatures and volcanoes and this and that, and they tried to turn it into something a little more Lord of the Rings-ish, when in fact it was a much more intimate piece. It became a different animal. That happens a lot. It’s a part of what you get used to. To a greater or lesser degree, everything I’ve worked on has been rewritten. This happens especially when you’re dealing with really big movies, where it’s a very expensive movie, or it’s turned into a very expensive movie.

FANGO: Is there a sort of “this is what it’s all been about” story you want to wrap this up with?

MG: My favorite story is my introduction to Hollywood — my first script I sold was a vampire script. This was back in the ‘90s. The guy who was directing it, this would be his first feature. He was a friend of mine from college. It was a period vampire film. If you’ve ever seen True Blood, it’s funny, because True Blood did what I wanted to do. The backstory of one of my vampires was that he was turned during the Civil War, and this was essentially a gothic vampire story set during the Civil War. It was for a reasonably low budget. One day, the director called me into his office, we’re two weeks away from shooting, and he says, ‘We have a lot of scenes that’re shooting at night.’ I said, ‘Yeah. The name of the script is Grey Night.’ He says, ‘I was wondering, maybe we can shoot these during the day?’ I said ‘No. Night is when the villains come out.’ And he’s like ‘Why?’ I said, ‘Dude. They’re vampires.’ He says ‘Huh. Do they have to be vampires?’ We were two weeks away from shooting! I walked out of the office thinking there was no way he was going to do this; and I walked into his office the next day and there he was rewriting the script. And they weren’t vampires anymore. I don’t know what they were! And that was my introduction to Hollywood. The director was a good guy. And he did some really good work, but he wasn’t really a horror fan. He didn’t like horror movies. He was much more of a drama guy. But that was my hard lesson.