Mark Shostrom’s War Stories: “We Have to Work Together,” Part 1 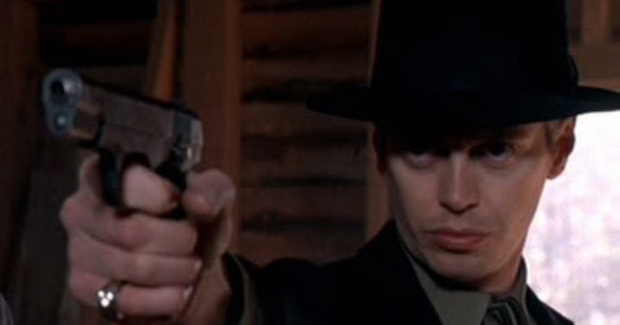 Steve Buscemi in "Things To Do In Denver When You're Dead," one of more than a few near misses for Mark Shostrom to work with Johnine Novosel. (IMDb)

Mark Shostrom’s War Stories: “We Have to Work Together,” Part 1

got a call in 1989 to meet a director. The woman who phoned was the film’s line producer, Johnine Novosel. The film was The Unborn, and the director was Bryan Forbes.

“Not the Bryan Forbes?” I asked Johnine.

She said it was indeed.

Forbes will be known to FANGORIA readers for directing The Stepford Wives. I also knew him from acting in The Guns of Navarone, writing Chaplin and directing The Whisperers. He was one of Great Britain’s most famous filmmakers.

I met Johnine at their Raleigh Studios production office. She was about 40, tall, with brown hair. Instead of a cold-looking business suit, as was typical in such meetings, she wore a casual summer dress. She was warm, easy-going and professional. I liked her right away.

Bryan and I connected when I told him Dick Smith was a friend (Dick did Stepford Wives). “Oh, Dick is a lovely man. When you speak with him, please do give him my best,” Bryan said. He detailed his thoughts on the job, which for me meant making fetuses inside a woman for some ethereal, dreamlike sequences.

A week later, I received a letter from Johnine. Their financing fell through. Her letter was complimentary, and she said Bryan picked me out of half a dozen others he met with. It was highly unusual for a unit production manager[CI1]  to bother with such a letter. But Johnine was different from the rest. I phoned to thank her for taking the trouble to inform me. She said, “Bryan liked you and so did I. We’ll try again. We have to work together.”

A few months later, Johnine called again. She was doing a TV movie about a spy. The producers and director needed special makeup for some disguises. Could I come in for a meet-and-greet? I went to the offices in Century City. It was good to see Johnine again. She smiled and said, “I hope this one works out.”

I met with four guys -- producers and writers, I thought. They never said who they were, but they were quite full of themselves. They yakked to each other about how fantastic their movie would be. I had read the script and felt differently. They asked me some makeup question and I said, “Well, when the director gets here, hopefully, he can answer that for me.”

One of the guys leaned forward. “I am the director,” he said.

It was just a misread on my part, but I got the feeling I had offended the guy’s creative genius. I went outside. Johnine asked, “How did it go?” I made a cutting motion on my throat. She looked disappointed but nodded as if she knew why. “Not the right project. But we are going to work together. It’s that simple.”

Johnine and I were simply two creative people who clicked and wanted to work together. Recently, I read an article that mentioned “extreme professional closeness.” That’s how I would describe my relationship with Johnine.

Not too long after, she called about a better project, Things to Do in Denver When You’re Dead. The script was hip and quirky, and the film had a talented cast. But before I could come in and meet, a senior producer hired someone that he had worked with before. As soon as Johnine found out, she phoned me: “I’m so sorry. They were supposed to leave all the hiring to me.” I told her not to blame herself. She said, “We keep striking out. You won’t be mad if I keep calling you for projects, will you?” she asked.

I thought about asking her to lunch but held off. That might come across wrong, and our relationship had always been purely business. If I did decide to ask her, I would make that clear. I never got around to it. I guess I felt there was plenty of time.

A year later, I had just dropped off designs for a bid on Robert Heinlein’s The Puppet Masters. David S. Goyer and I prolonged the meeting by talking about horror films, so I got to my studio late. There was a message from Johnine. I phoned her the next day.

She told me she was on the producing faculty at the American Film Institute. (I knew that place well; I had started there myself.) She said, “You probably won’t want to do this, and none of the projects I brought you in for worked out, so I almost hate to ask…” I told her not to worry and asked what the project was.

“I’m wrapping up my graduating class of AFI producers and wanted to bring in a unique speaker. How would you feel about talking to them about the history of movie makeup and special effects?” I asked her when. In a few days. I had just pulled an all-nighter for the Puppet Masters presentation, so of course, I said, “yes.”

Johnine said, “Bring a bunch of your business cards. My students are the producers of tomorrow, so…”

I slept like the dead that night, and the following day started preparing my AFI talk. I wrote notes on everyone from Lon Chaney to Rick Baker, every makeup film from 1915 to 1993. I knew most of this from memory but made a bullet-point list to keep me on track. It became another all-nighter. Throughout, I smoked too much and got dehydrated drinking one coffee after another.

At the AFI, I addressed the roomful of Johnine’s students. After a bit, my throat got dry. I cleared my throat a few times and felt something touch my arm. It was a cup of water. Johnine had crept up so quietly I hadn’t heard her. I continued to speak. More dry throat. Johnine with another cup. A few people chuckled. My talk went on for an hour. My throat was giving out. Finally, Johnine came over with no pretense of discretion. To the chuckles of everyone, she handed me a bottle of Evian and put another on the podium.

Afterward, as everyone got up to leave, Johnine rushed over. “Where are your business cards?” Without waiting for a reply, she fished into the side pockets of my suit, grabbed the cards and went into the crowd, passing them out. “Hire this guy,” she told her students. “I’m your instructor, so you have to do what I say.”

She walked me to my car. “I’m really grateful to you for doing this. Your talk was wonderful,” she said.

“It was fun. Thanks for the water,” I smiled.

She smiled back. Then she said, very seriously, “I know you’ve probably heard this line, but I mean it. We are going to work together, and it’s going to be a great project. It just hasn’t happened yet.”

“It will,” I said. “ A little time and we’ll get there.” We hugged, and I drove off, thinking about how Johnine kept coming into my life. I thought about her sincerity, her integrity, her kindness. She was a rare bird.

I suppose before I drove off, I should have asked about that lunch. But I did not. I don’t know why. There always seemed to be time.

To be continued in part two.