Mark Shostrom's War Stories: “We Have A Report Of A Mutilated Woman” 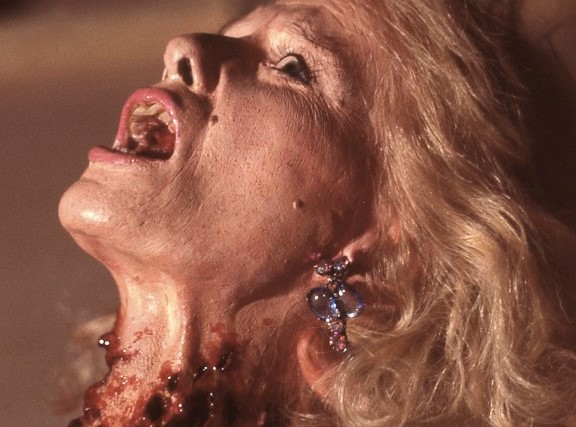 Just trying to get a head. (Photos courtesy of Mark Shostrom)

Mark Shostrom's War Stories: “We Have A Report Of A Mutilated Woman”

ne of my crew on A Nightmare On Elm Street 3: Dream Warriors was a close friend, Bryant Tausek. He flew out from New York and stayed at my house.

I put him in charge of Brooke Bundy’s severed head (Brooke played Kristen’s mom). Bryant wanted to make the head from a material called Elvax, a plastic resin that hyper-realistic artist Duane Hanson used for his human-figure gallery displays. Always eager to try new materials, I ordered some Elvax and told Bryant to run with it. As Bryant finished the head, painting it with oil paints the way Hanson did, he seemed impressed with how well the Elvax material worked. But he kept talking about it. After a while, I noticed Bryant wasn’t praising the material’s attributes; he was complimenting his own artistry. I teased him, but his self-praise kept popping up.

We shot the scene with Brooke, Patricia Arquette and Robert Englund at the stages New Line had rented near Chinatown for the Elm Street sets. Driving home on the 110 freeway, Bryant kept going on about what a hit Brooke’s head had been.

“Yeah, yeah. It worked fine,” I said. “Enough patting yourself on the back already. Let’s drop everything off and hit the John Bull pub.”

Bryant concurred, then said, “I wonder what some of our fellow drivers will think of Brooke.” Then he held the head out of his window.

“Bryant! Put that down! You’re going to get us arrested or cause a wreck.” I saw a car next to us suddenly slow down and pace us. At the time I didn’t give it much thought, but later I figured out what the driver was doing.

We arrived back in South Pasadena but instead of heading to my studio, we unloaded our gear at my house a few blocks away. I used to call it the Munster House. It was huge, dark and Gothic-looking, with branches and vines hanging over the front. We had filmed Penelope Sudrow’s “Welcome to prime time, bitch” scene a few nights before, and that head-to-toe dummy (still in its nightie) was upstairs. My housemate, Candy, had been reminding me to remove Penelope’s body from the sofa because she was having guests over. I liked to push Candy’s buttons, so I did move Penelope from the sofa … she was now in Candy’s bathtub upstairs, awaiting her arrival for a good scare.

Bryant unfolded a plastic bag on the sofa and put Brooke’s head on it. He said he wanted to head down the street for some quick laundry before we hit the John Bull for a late beer. He walked out and I went upstairs to take a nap. The Munster House - one of those wonderful, old Cal Trans rentals - was so well-built and solid that you would never hear the door knock or the doorbell. You couldn’t hear any downstairs sounds whatsoever.

I fell into a dream. Suddenly I was jolted out of it by a thunderous pounding. Jesus, what the hell…? More pounding. The front door. I went downstairs. Non-stop pounding. I wondered if it was Bryant messing with me. I was still groggy. I opened the door to see … nobody. Then out of the corner of my eye, I saw a police officer with his hand on his holstered gun. In the darkness, I made out more officers - only these guys had guns drawn, pointed toward the ground. In front of the houses on both sides were rows of patrol cars. From my left, a man in a suit asked, “Are you Mark Shostrom?”

I was instantly awake. “Yes…”

“We’ve had a report of a mutilated woman. We need to check your house.”

It wasn’t a request.

“Come in. I can explain what I think this is about.” The detective entered with seven or eight officers.

The first thing they saw was Brooke’s severed head with its torn stump, fresh blood glistening. Every uniformed officer was now touching his gun. “It’s plastic,” I said. “I do special effects for movies. I just returned from set, with my buddy… he held it up inside my truck and I told him to put it down… I guess someone saw it.”

The cops didn’t say anything. They just stared at the head, and at me. “If you’ll let me pick it up, I can show you. It’s made of plastic resin.”

I did so, holding Brooke’s head and tapping it so they could hear and see it was hard. Not one cop smiled; not one said, “Oh, that’s neat.” They were the most deadly serious cop faces I had ever seen. South Pas is a relatively crime-free city, so a mutilated woman call got a good portion of the entire police force to show up at my house. I pulled out one of Brooke’s glass eyes, then took them upstairs to show them Penelope’s fiberglass body so they could be sure none of this was real.

Finally, they seemed satisfied but not amused in the least. I was curious how they found me and why they had their guns drawn, so I asked.

The answer: “Your friend scared the hell out of a lady on the freeway. She got your plate. When we didn’t find anyone at your Fairview facility, we ran you again and found your truck here. We saw blood on the inside of the truck’s door. That’s when our guns came out.”

I apologized and again told them my buddy was a little too proud of his creation and wouldn’t put it down. The cops left. Not five minutes later, Bryant came through the door with his laundry basket and a smile.

“Hey, Boz. What’s happening? Let me put on a clean shirt and we’ll head out.”

I said, “Yeah… because over that beer I want to tell you what a big hit Brooke Bundy’s head was while you were gone.”

Just then, Candy walked in, said hi, and beelined upstairs. I put my finger up for Bryant, meaning, ”Hang on a minute.” I heard Candy reach the top of the stairs, and a few seconds later, her scream. Her steps came back down, she beelined to me and punched me in the shoulder.

Just another night at the Munster House.