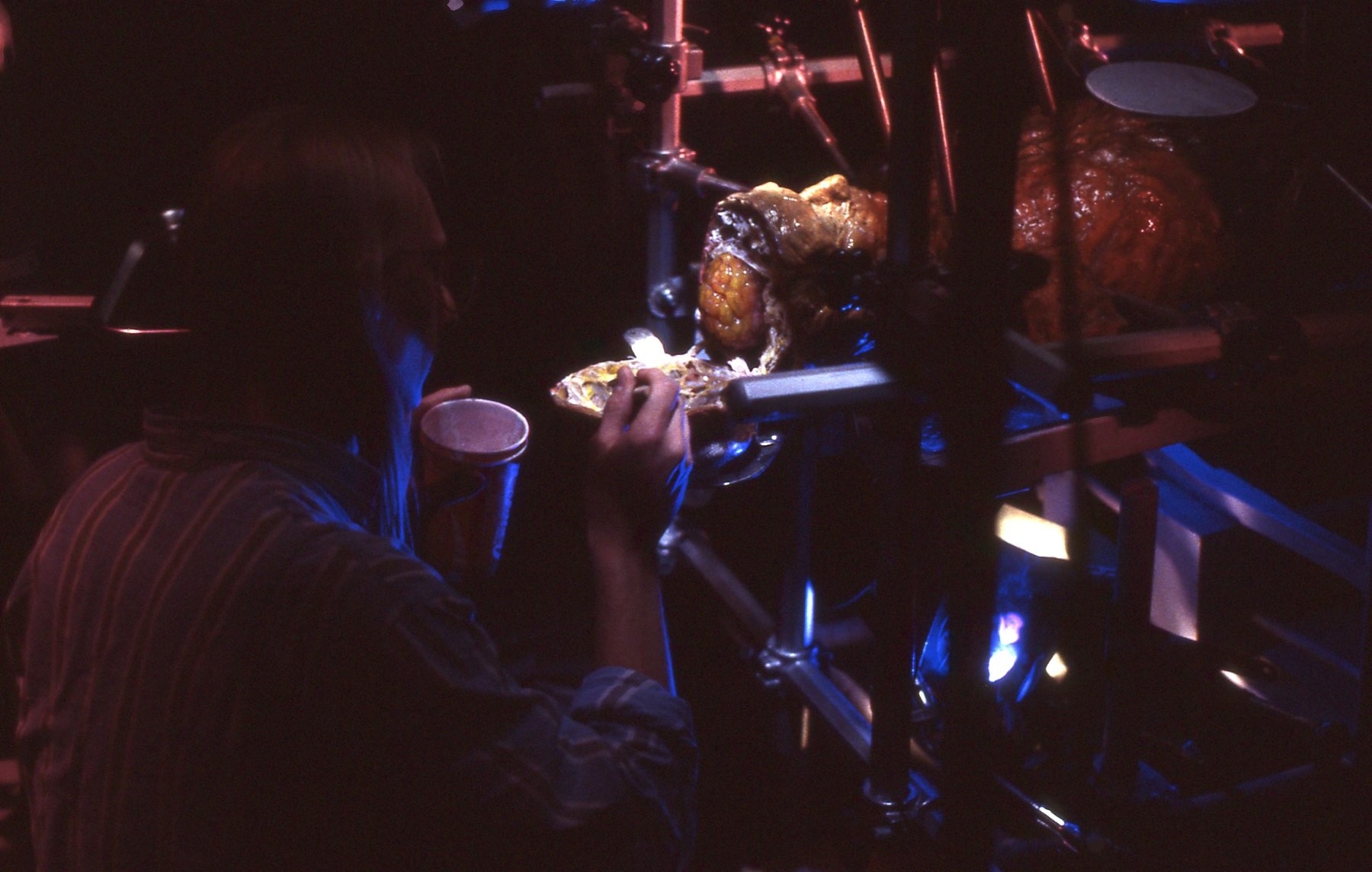 am always up for a good practical joke. The Ben Affleck life-cast-that-never-was prank had my students believing it for two weeks. The thought of Ben in their classroom made many of the girls nearly swoon, but it was merely clever Photoshop work by Charles Wills.

My longest running joke was on Phantasm III. It stretched into more than a month. Dean Gates and I created the special makeup effects for the film. Because of the low budget, I couldn’t hire a big crew. Dean and I felt we could handle it all ourselves, but we would need six months prep. Since writer/director Don Coscarelli had plenty of lead time, that became our deal. Dean and I divided up the effects equally, each taking custom effects or makeups to create, plus each revamping projects (Coscarelli had scripted some effects that could be repurposed from my existing Phantasm II props or moulds). One of Dean’s revamp projects was “the brain dwarf.” This was one of the Tall Man’s tiny minions on a metal slab for a shot where actor Angus Scrimm would pull out its brain. We decided to use the Ed Gale suit from Phantasm 2 for this. Dean’s job would be to repair, clean and repaint it, then make a skull that could open.

During our months of prep, we had a few visitors, including two film fans: Guy Thorpe and Jeff Gustafson. Guy was probably the biggest Phantasm aficionado on the planet. He drove a hearse that he rented to Coscarelli for all the Phantasm films. Once, when Guy came by, he drooled over all my P2 props, especially the Ed Gale dwarf suit. After he left, Dean commented that Guy seemed a bit too smitten by all my FX props and apparently wished he could decorate his apartment with them. Jeff was a prop collector. He occasionally came by and I would sell him a film-used prop. He was a security guard at one of the studios and was always getting in hot water with his wife because he spent everything he earned on movie props.

In the final stretch of our prep period, with Phantasm III’s shooting drawing near, Dean got into the makeup union. Michael Westmore began offering Dean days here and there on Star Trek: Deep Space Nine, at a much higher rate than what we were making with Coscarelli. Since most of our work was done, there was no problem for Dean to skate over to Paramount. I would continue working at my studio alone. Dean said more than once that he still needed two or three days to prep the brain dwarf.

One day, while Dean was on set for Star Trek makeup honcho Mike Westmore, I accidentally broke the back window at my workshop. I was getting a long piece of pipe and backed up, ramming the pipe through the window. There was wire in the glass, so it held together. I reasoned that a person reaching through a four-inch hole could twist the handle and open it to crawl through, but it didn’t really concern me. I had no idea that the broken window would be the start of a month-long prank.

Dean was still at Paramount when a guy from the Phantasm art department called. He said they needed to measure the brain dwarf for a metal table they were making for it.  Could he come by? The art department fellow arrived that afternoon, looked at the body and said, “Man, I don’t know if measurements alone will work. Is there any way we could take this, make the table, then return it to you?”

“Knock yourself out,” I replied.

He took the Ed Gale body away, but I never mentioned it to Dean. At this point, Dean had gotten as far as putting the skin onto Ed’s fiberglass body form but had not started any repair or painting work.

A week went by. Dean was getting more days at Paramount. I was putting the final touches on the Tall Man’s frozen head when Dean phoned to ask about the schedule. I didn’t have concerns since our P3 workload was almost done, but Dean was feeling nervous about finding two or three days to finish the brain dwarf.

Working alone at my shop, I had a little too much time to think. A devious plan began developing - with a little help from chance circumstances.

Dean returned for a day. He went into the back room and returned, asking, “Did you know the back window is broken and open?”

“Are you serious?”  I replied, playing dumb.  “I never keep it open when I’m not back there.”  (Actually, I kept it open most of the time.)

The next phase of my plan sparked moments later when Dean looked around for the brain dwarf/Ed Gale body. I didn’t say a word as he searched all over the shop. He came over with a perplexed look.

“Did you put the Ed Gale body somewhere?” he asked.

Again, I played dumb. I even helped Dean look for it.

By saying nothing and letting Dean simmer in his confusion, the scenario evolved spontaneously. Dean spent the rest of the afternoon on other work. Every half hour or so, he’d wonder aloud, “If someone broke in, they could have reached through that hole… someone small could fit through that window… who could it be…?”  I let him run with his thoughts. Guy was quite short, so I waited for it …

Dean blurted out, “I bet it was Guy! It has to be him! Do you remember the way he looked at all this stuff? I bet he broke in and took it.”

I told Dean that Guy would never do something like that. But Dean let this imaginary scenario take hold and it never left his head. After a bit, I deliberately started agreeing with him. That put fuel on the fire. Now Dean was worried not only about finishing the brain dwarf: He couldn’t stop thinking about Guy as the prime suspect in its apparent theft.  It was starting to drive him nuts.

The icing on Dean’s suspicions of Guy came when Jeff called and asked if I had any props to sell, or if he could just come by to see what we were working on. I knew Dean had a day with me coming up. I was also aware that Jeff knew Guy, so I filled him in on the developing prank and asked for his help.

A few days later, while Dean and I worked and he went on about the missing dwarf and fumed about Guy, Jeff knocked on the door. The three of us chatted for a bit, then Jeff casually asked me, “Did you sell that Ed Gale dwarf suit to Guy Thorpe? That’s the prop I was really interested in getting.”

Dean looked up. I told Jeff I didn’t sell it to anyone, but that it was missing.

Jeff said, “Well, I saw something that looked like it at his place last night. I’m almost positive it was the Ed Gale thing.”

Dean’s lips went tight, and rage burned in his eyes.  He stared at Jeff and asked, “You saw the Ed Gale suit … at Guy’s?”

Jeff replied, “It sure looked like it. He seemed to want to keep it hidden. Like when I noticed it, he said it was something else and guided me away from it.”

I connected eyes with Jeff. Dean had not picked up on our little act.

“You’re kidding,” I said, then played along with Jeff. “Do you think you could go back over and try to get a better look?”   Jeff said he could.  Dean was about ready to crack.

“We’ve got to call the police!” he cried.

“Hold on,” I said. “Let’s let Jeff look first. Then we can figure out what to do. If Guy does have it, sure, he’ll be arrested, but the police will also take the body as evidence.  We need to think about making a new one from the molds I have.”

Starting from scratch was even more work and worry for poor Dean.

It’s at this point I should have called April Fools’. Unfortunately, I failed to consider the best time to deliver that. The art department phoned and asked if they could bring the body back to me. I told them to hold off. I knew they would keep it safe, wherever it was. What I didn’t know was that it was being kept safe on the set.

Dean and I started our set days on the Phantasm III stage. The brain dwarf was scheduled for a few weeks off. I told Dean we would figure it out, but my casualness made him even more flustered. The missing body was weighing on his mind like a lead weight; it was all he could think about.

I was wondering when to bring the prank to a close when Dean said he was going to look around at the sets. Moments later, he returned with a stern face and said he had something to show me. He took me onto a set.

There, on a metal table, was the Ed Gale dwarf.

The whole thing exploded in my face in one second. I confessed and tried explaining everything, but Dean wasn’t having it. The man I had never seen angry — with anyone — was pissed bitterly at me. I had hurt Dean and caused him weeks of anxiety over something I thought would be funny. It ended up being anything but. I never felt so horrible in my life. Dean didn’t speak to me for days. That, in turn, hurt me, but it was all my own doing.

Dean and I finished Phantasm III and are still tight friends 26 years later. We laugh now about the practical joke that backfired. We’re even making a film together — but I, for one, will make sure it’s free of elaborate pranks.

Mark Shostrom began his 35-year career at the birth of the golden age of practical makeup effects in 1980.  He designed the special makeup for cult classics Evil Dead II, A Nightmare on Elm Street 2 and 3, From Beyond and Phantasm 2 and 3.  Moving into television, he won Emmys for The X-Files, Buffy the Vampire Slayer and Star Trek: Voyager. He can be found on Twitter and Instagram under his commonly used pseudonym @markshostrom. His blog is https://markshostrom.weebly.com.‍