Mark Shostrom’s War Stories: The One Time I Should Have Ignored My Dad’s Advice 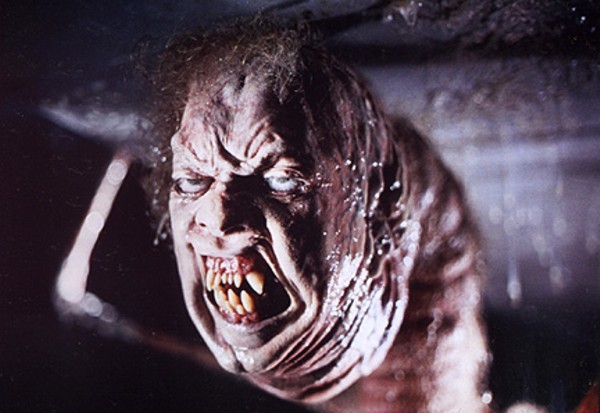 Mark Shostrom’s War Stories: The One Time I Should Have Ignored My Dad’s Advice

t the start of the 1980s, if you were lucky enough to be arriving in Los Angeles to try and get into the relatively new field called Special Makeup Effects, you were coming into an era that was absolutely sizzling with excitement. I met lots of folks on American Film Institute sets[CI1]  in 1980, but it wasn’t until Christmas that I encountered my first true compadre in makeup effects. I was in line to see Altered States with my girlfriend, Shan, blabbing about the special makeup Dick Smith had done for the film. As I bored her to tears, I heard a guy behind me going on to his girlfriend about Dick Smith, too. I turned around and met Brian Wade. There was an hour before the film started, so the four of us went to have coffee. The conversation went like this: Brian and I gushed our admiration for Dick and Rick Baker non-stop while our girlfriends sat silent, occasionally shrugging and smiling, no doubt thinking that our boyfriends are insane.

Brian and I became fast friends. He was my subject for trying numerous full-head casts. A few months later, Shan, an Art Center student, was at a basketball game at rival college Cal Arts. She heard a guy droning on to his girlfriend about Rick Baker. (Oh, the poor girlfriends of us makeup effects hopefuls back then…)

Shan said, “You should meet my boyfriend. He’s a fan of Rick Baker, too.”

So it was that I met Shannon Shea. We ended up as flatmates, then housemates. I had a huge old Pasadena apartment that became the revolving room of film newbies. Other flatmates who came and went included Philip Duffin (later production designer on Evil Dead II and Phantasm II) and Michael S. Murphey (who would produce NOES 2: Freddy’s Revenge, Bill & Ted’s Excellent Adventure, and District 9).

In 1981, I met Dave Miller, another hardcore Dick Smith and Rick Baker addict. Dave -- who would go on to create the original Freddy Krueger and hire me to run Freddy’s foam and do sculpture work on A Nightmare On Elm Street a few years later -- was always introducing me to people and recommending me for jobs. He was, and is, a generous and kind guy.

That year, two films came out: The Howling in April and An American Werewolf in London four months later. As if Dave, Shannon, and I didn’t have enough to cream our jeans over before these films, now we were seeing game-changing effects. I saw both werewolf movies four times each in a two-week period, once venturing to downtown LA at midnight for Eddie Quist’s transformation. My buddy and I risked getting robbed and having the shit kicked out of us for a screening near skid row. As we prayed for a cab at 2 a.m., we calculated it was worth it.

Around this time, all of us in makeup effects began to hear about another film being made that was reportedly going to one-up AWIL and The Howling: John Carpenter’s remake of The Thing. Rob Bottin was designing the effects for a shape-changing creature that could look like anything. Everyone was salivating to work on the project.

Are you getting a vibe of the era yet?

One day, Shannon brought over his Cal Arts friend, James Cummins, a talented sculptor who had his sights on directing. James was working on The Thing, in charge of what Rob Bottin called “the art deco” sculptural alien looks. James and I clicked, and he liked the many sculptures I was working on. Then Brian got a job sculpting on The Thing. I called to congratulate him. He was a talented sculptor even back then, and I felt he deserved that break like no one else. Dave tried to get on The Thing but didn’t know anybody on it to connect with. I now knew two people sculpting for it, but I didn’t feel it was right to be pushy. In addition, I didn’t think my sculpting was as good as that of Brian and James. (I was sending all my new sculpture photos to Dick Smith, who wrote back with “Fair. Keep at it,” and, once in a while, “Looks good.”) Lastly, I felt Brian and James might be protective of their positions and I respected that.

My entire living room was a studio with at least six sculptures going: a werewolf, a gorilla, an alien, an old man. I didn’t want to take the time to mold each one, so I worked out a deal with an Art Center photographer friend, Sheryl. I’d write term papers for her and she’d shoot photos of my sculptures. Her dynamite black-and-white prints were the ones I used to make my new portfolio. Rick and Rob’s werewolf work inspired me to no end, and I lived and breathed sculpting. I ate home-cooked bangers and mash so I could afford more clay.

One night, my roomie Phil told me a fellow was coming over who he had met on a low-budget horror film. Erik Jensen, said Phil, was Rob Bottin’s line producer for The Thing. “Holy living fuck,” I said. “When is he getting here?”

“Any minute,” Phil said, then laughed as I tried to tidy up my living room: mostly piles of molds and bags of plaster. Erik arrived, looked at my sculptures and seemed impressed with the number and quality of them. He invited me to come and meet with him and Ken Diaz, Rob’s shop foreman, to formally show my portfolio.

Erik, Ken and I met at a diner near the Universal Hartland effects facility where they were creating all the monster work for The Thing. This was about late 1981 or early 1982. I still remember odd little details because this interview was so vital to me: The coffee was shitty, and Ken had a checkered shirt; I had a bloody severed head in my portfolio (I recall that piece-of-crap work). But I also had Sheryl’s cool photos of my sculptures, stuff I hadn’t even had a chance to mail to Dick Smith. I asked Ken what kind of things they were creating. He smiled and said, “Really far-out, crazy shit. Stuff you wouldn’t believe.” I was excited. Really excited. Looking back, I honestly think my passion for makeup effects told them more than my sculptures did. I didn’t have it all there, art-wise, but my love for makeup and monsters was oozing out of me.

A few weeks later, I got a call from Dave Miller to help out on The Beastmaster. No reflection on Dave, but it was the shittiest film imaginable in the shittiest part of LA, and a complete cluster fuck of a production. I don’t recall today how long the gig was for -- two or three weeks -- but I do remember committing to the production manager. I got to oil up John Amos, see a future Bond girl rip her shorts off in the trailer, watch a ferret take a shit on Rip Torn’s shoulder, and have a black tiger growl at me from three feet away. Oh, and I did some prosthetic makeups on three witches.

Legendary cinematographer John Alcott (2001, The Shining, Barry Lyndon) complimented me one night on my witch makeups, which meant the world. Other than that moment, the entire project was horrid. But I had committed.

In the middle of shooting, Erik Jensen called. “We’re making the dog-thing stuff for the final scenes and need some help. Are you available?”

Okay, dear readers, here’s the painful part. My dad taught me to always honor a commitment: Never bail once you agree to a job.

I explained to Erik that I was still on the film for a few more weeks. Could I ring him then and start on The Thing in a week or two? He said to call back and see where they were. I finished my hellish commitment to The Beastmaster and phoned Erik. The Thing was winding down.

My opportunity was gone.

Is there a lesson here? You bet there fucking is: Sometimes, your dad can be wrong. And believe me, I have tried to explain it to mine for nearly 40 years. He’s proud of me for following through, which makes me feel good … but then, he hasn’t seen The Thing.

Months later, Dave saw a special screening of the film. He phoned me that night and described the Norris head sequence, from Doc’s arms getting bitten off by Norris’ stomach to the head pulling itself across the floor by its tongue.

A week later, I went with my buddy Anthony to see The Thing at its premiere on Hollywood Boulevard. He was a makeup effects guy I did many projects with. As we walked out, I turned to him and said, “I turned down a chance to work on that to stay on fucking Beastmaster? If I ever do anything that stupid again, shoot me.”

The Thing episode is my only true regret in a 35-year career. But how could I have known? I still watch the film at least three times a year. It is, in my book, a perfect monster movie. It’s one of those rare instances where the script, the director, the cast, the cinematography, the music, the makeup effects -- every element jelled and intersected in a way that produced inimitable magic.

Of course, I think about my shot at it each time I see it.

So if I could go back in time, what would I do? I’d find Dave on that shit set, explain why I was bailing, he would understand, and I’d get in my car without telling the production manager and drive straight to Universal Hartland… and maybe, years later, phone my dad to tell him he was wrong once.