Mark Shostrom’s War Stories: The (Not So) Great Escape 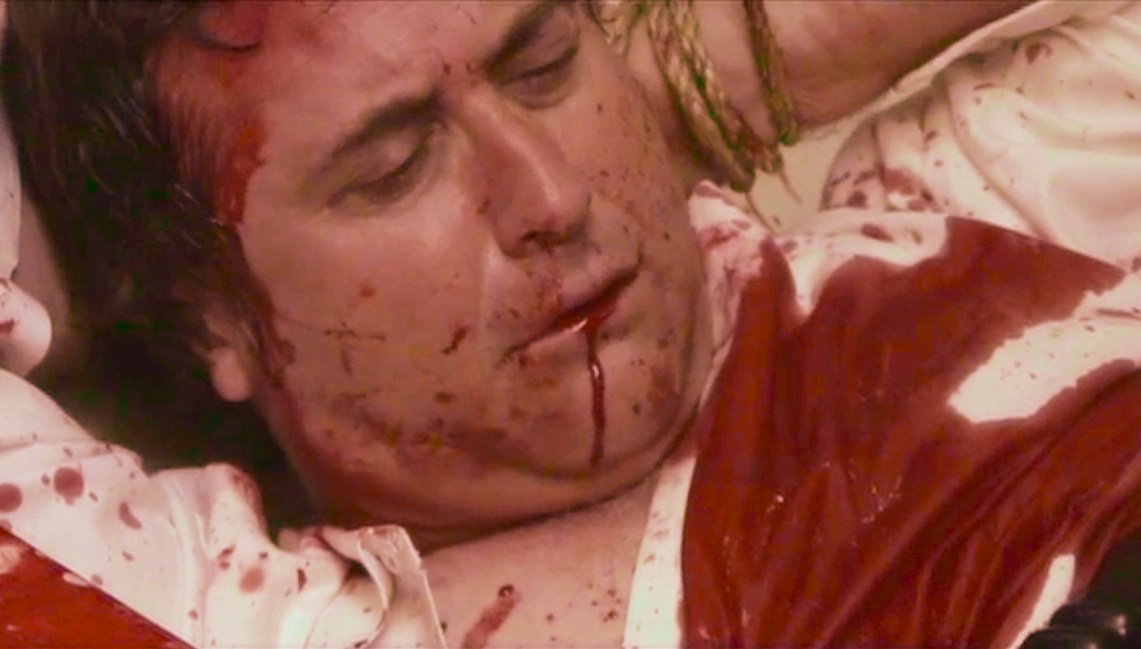 Marc Wasserman in the bathtub, Grappling With Your Demons, 2008. (Photo courtesy of Mark Shostrom)

Mark Shostrom’s War Stories: The (Not So) Great Escape

The man was in the bathtub tied with rope.  The murder room had been carefully chosen - at the far end on the top floor.  It was a Thursday night so there were few guests at the hotel.  That had been planned, too.  Nobody would hear anything, no matter how much the man screamed.  And he screamed a lot.  He was covered in blood but the knife kept slamming into him.  Crimson arterial sprays gushed all over the floor and walls.

“Keep rolling… keep pumping… more… Cut!  How are we on blood, Mark?” asked Ford.  “Ten gallons left.  We’re cool.”  I was doing a short film with my pals Ford Austin and Marc Wasserman.  It was guerrilla filmmaking all the way, meaning they had no permit to shoot in the Orange County luxury hotel. Although permits themselves weren’t much, whether the hotel would allow them to shoot what was scripted was another matter. Ford and Marc felt there was no way they would agree to it, so they took a more daring route - they did it anyway.

Ford and Marc’s plan seemed like an effective one. We had one room for equipment next door and the boys had rented other rooms for actors and crew to rest, so we had an entire wing on the top floor to ourselves. Our filming site - room 704 - was as far from anyone as we could be. During the afternoon, they shot all the scenes leading up to the climax, which was saved for last: the brutal stabbing murder of Marc’s character. By the time we started, it was dark. The maids were gone, and so far we hadn’t seen a single hotel guest on the floor. All was going according to plan.

I had brought 15 gallons of blood - regular and pumping - along with a trombone sprayer, 60cc hospital syringes, and two Flo-Master garden sprayers. I used most of the blood that night. In our effort to mitigate spill damage to the suite, I advised Ford to have thick, clear plastic sheeting placed everywhere outside the bathroom, taped at the carpet edges. Bloody footprints stayed on the plastic, and the carpet remained untouched. The plan was to wrap up everything at the end and take it away.

During a break in our bloodletting, one of the crew told me his friend was raising newborn stray kittens and asked if I would be interested. I had just lost a cat to cancer and told him no. He kept on me and said there was one kitten left, dark gray with white feet. That’s what my other cat had looked like. I shook my head.

Midway through the night, someone on the crew asked what we were all wondering but hadn’t voiced: “Where’s all the blood that’s not in the tub going?”

It was quiet a second, then Ford said, “The only place is down. I hope that room’s not rented.”

He sent someone to check. The room below was empty. Its bathroom was undoubtedly being decorated with drips of blood from the ceiling, but as long as we were gone at dawn, all should be fine. Should be. (The word “should” in filmmaking translates as: “But there’s no guarantee it still won’t fuck up.”) Marc stayed in the tub nearly the whole night, tied with ropes and getting bloodier with each take. He bellowed during each shot, and it’s a wonder nobody heard.

As first light arrived, we wrapped. The camera and sound crews packed their gear. The guy whose friend had the kittens pestered me again. I let him give me his friend’s number but said I still wasn’t interested. I helped a few production assistants clean the bathroom.  We used sponges as much as possible, squeezing the blood down the tub drain. Finally, we had to resort to towels - those nice, thick, white hotel towels. Ford had ordered more from the maid earlier, so we had stacks of them. We used them all.

Marc gave me a check and said farewell. The bathroom was done so the PAs left. It was just Ford and I. He was wrapping the blood-stained towels and bloody rope in the clear plastic sheeting. I grabbed my remaining blood containers and put them outside the room on a rolling rack. Ford asked if I could grab him a rack for the plastic and towels, so I went to the end of the hall and found one. I arrived at the open suite door to see Ford in the room tying his bloody bundle like a huge birthday present.  He left it in the middle of the floor as he said, “Ah, perfect,” and came outside.  He grabbed his rack as … Click.  The door shut behind him. He searched his pocket for the card key. Another pocket. He looked at me and said, “Shit. My card key’s in the room.”  Then he said, “Go. I’ll get another.”

I headed to the elevator. Inside, I put my jacket over any containers labeled “blood” and generally adjusted things so my cart would look less like a guerrilla filmmaker and more like a traveler who just carries too much stuff. The elevator doors opened, and I could see a commotion at the front desk.

A girl was jumping up and down, her boyfriend trying to calm her down. I heard her blurt out to the front desk woman, “Blood all over the bathroom!”

I was able to get to the desk and check out. Ford and Marc had rented a room in my name, but I opted to go home. As I finalized things, four cops came in. I heard them talking to the manager.

One cop asked him, “Which room?”

“The maid found bloody towels … and ropes … wrapped in plastic.”

“Can we speak to her?” asked the cop.

I glanced at my rack.  One white container had some blood dripping down its side. I moved the jacket sleeve to cover it. The cops rushed past me without noticing the blood buckets on my cart. I wanted to go up and warn Ford, but it was too late. I headed to the parking lot. I found out later that night that during my elevator ride, while Ford was in his other room looking for a second card key, the maid entered 704 and found the bloody mess. Ford heard her scream and hightailed it out.

It turned out to be an expensive shoot. The hotel charged Ford and Marc $2,500 in damages to the rooms.

As for me, I gave in and phoned the guy who had the kittens. I asked if he still had the runt of the litter left.

“She’s waiting for you,” he joked.

A few days later, I drove back to Orange County to adopt her. Since she liked to root around in cluttered closets, I named her Newt, after Carrie Henn’s character in Aliens.  She is 11 today and in good health. Ford and Marc’s film won several awards and they continue to make films guerrilla-style. In the end, it worked out well for everyone. Except the hotel maid. I’m not sure if she ever came back.