Mark Shostrom’s War Stories: The Art of Setiquette (Or How to Get - And Stay - On a Film) 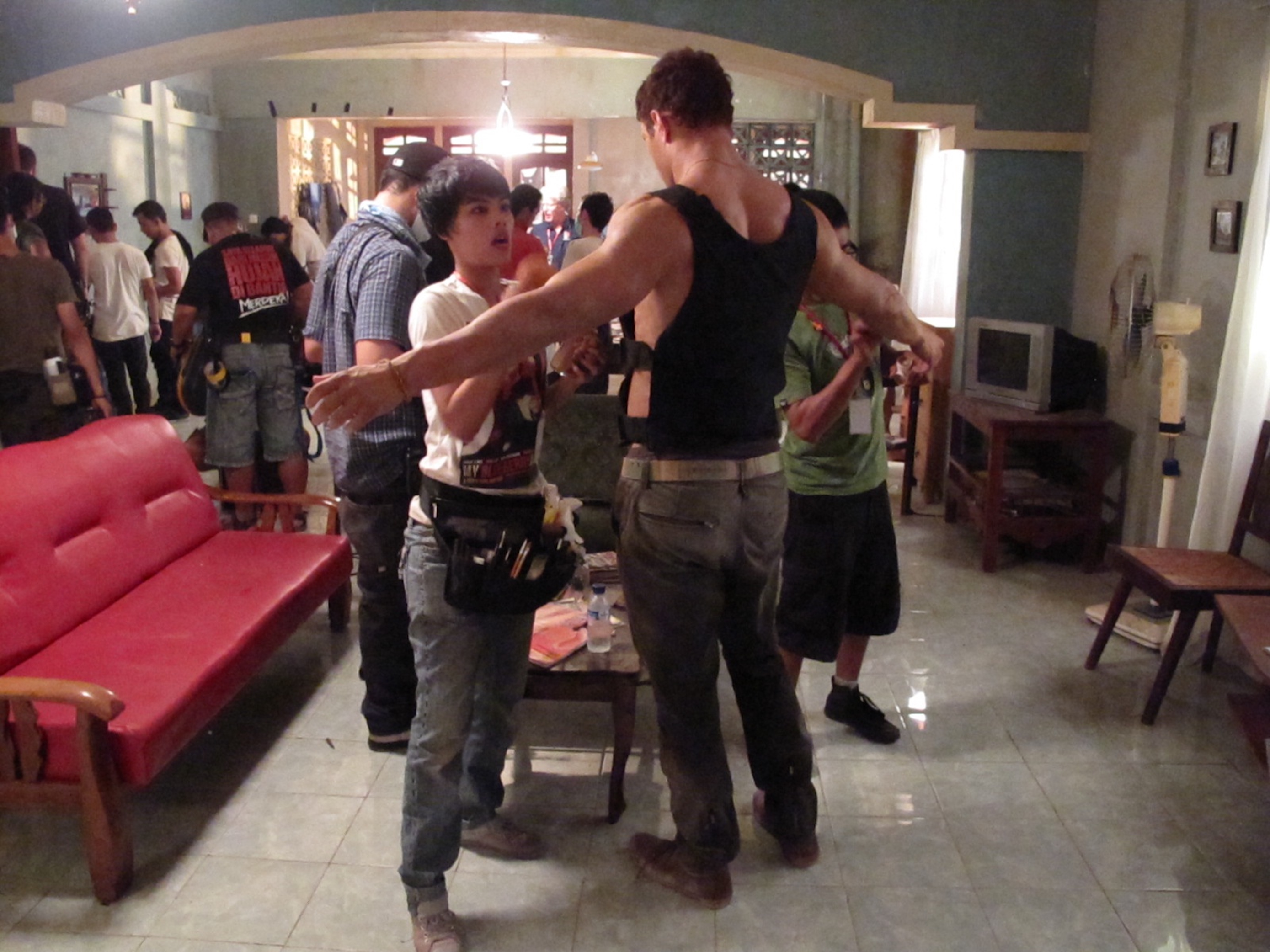 Novie Ariyantie touches up Kellan Lutz on the set of "Java Heat." (Courtesy of Mark Shostrom)

Mark Shostrom’s War Stories: The Art of Setiquette (Or How to Get - And Stay - On a Film)

f you have been in the film business for more than a week, you probably know how to handle yourself fairly well on a set. If you’re about to do your first day, however, you may be like I was: clueless. I had no idea about what to do, when to do it, or where to be when I did it.

We are all green at some point, and there is no place you can feel dumber or more in other people’s way than your first day on a movie set.

Acclaimed cinematographer Gordon Willis (The Godfather, All the President’s Men) was asked in an interview what he looked for in the camera operators and assistants he hired. He replied: “I generally look for someone who’s both pleasant and technically astute.”

At some point in my teaching years, I made sure to give students a talk on the same topic: what I look for in hiring a makeup effects team. I had the same philosophy as Willis, and I suspect most department heads feel the same.

You want to be a hire-able and valuable commodity. How indispensable you are comes down to three things.

Your skill level, where you’re at now. Are you hoping to get into cinematography? Shoot a short film. If you can’t afford to rent an Arri, shoot on your iPhone. Do you want to be an editor? The same principle applies. Cut something on Final Cut, but if you can’t buy it, get iMovie for free. What equipment you use is less important than how you use it.

If you want to do makeup FX, put together photos of your best makeups and sculptures. Forget blood and gore, that will not impress anybody. Three photos of really good work are better than 20 photos of mediocre stuff.

I hired Mike Trcic after seeing realistic human fingers he sculpted for Romero’s Day of the Dead. He flew out from Pennsylvania for the job with me and went on to be lead sculptor for the T-Rex in Jurassic Park.

The only thing that improves your abilities is practice.

The one constant about artistic skill is that it can always be improved. ‍

Woody Allen has that famous line: “Eighty percent of success is showing up.” You may think punctuality is a little thing. Think again. Making a film costs thousands, hundreds of thousands per hour. If they need you and you’re late, there are a hundred people lined up behind you. And one of them just took your job because you couldn’t get there on time.

There’s a saying with film crews: “If you’re early, you’re on time; if you’re on time, you’re late; if you’re late, you’re fired.” How true is this? On Voyager, we had a two-part episode where they hired many additional makeup artists. It was three weeks of work at the top union rate. Once hired, the 2nd assistant directors were in charge of scheduling them.

On day one, an additional makeup man showed up seven minutes late. “Go home,” our 2nd AD told him. “You’ve been replaced.”

“No. Just go,” she said, waving him away. “I’m calling the union to send someone else.”

I thought the guy was going to cry. He ambled off, having just lost out on between eight and 10 thousand dollars - and possibly his house payment - because of seven minutes.

Once, when teaching, I was ending my ”three things” talk when a student who was habitually late slogged through the door, her gear falling everywhere. The class started at 8 a.m.; it was now 11.

“Did I miss anything?” she asked, out of breath at having crossed the street from her apartment.

I replied, “Only your whole career.”

This is the single most important trait you can have. You can work to improve the other two: Set your clock earlier and practice your art/craft/skill. But let’s face it: Your attitude that you generally have around other people -- is what you carry through life.

The first thing people think of when your name is mentioned probably has to do with your attitude.

Once a young FX guy had an appointment at my studio to show his portfolio for a job. He entered, handed me his portfolio, and as he turned to sit, exclaimed, “Boy, that guy [the office manager] at Rick Baker’s is such an asshole! I’ve been trying to get an interview there for months. What a dick.”

His butt hit the sofa.

I had already made my decision.

I would never hire that guy, not even if his work was the best I had ever seen.

Most producers and directors hire people they have worked with before or new people who have check marks for the above three qualities. Anything less, and you’re risking getting tagged as too much of a problem. Filmmaking has enough problems, and nobody wants to add to them.

I have one more story, one I love to tell. It’s illustrative of all three points in this column. In 2008, I had a student, Emma, who came over from England. On day one, she arrived on time, but all her expensive makeup gear had been stolen from her car. I outfitted her with a new kit, and the school and I donated makeup and supplies. Emma diligently worked at her artistry daily; she had demonstrated her attitude and punctuality to me by day two.

When she was close to finishing nine weeks with me, I emailed Nick Dudman (all the Harry Potter films) in the UK and asked if he would meet with Emma for a portfolio viewing. That led to two Potter films for Emma and since then, she has won two Emmys for Game of Thrones. Emma achieved all this herself. She even engineered the email I sent, because if she hadn’t displayed full marks in all ”three things,” I never would have written it.