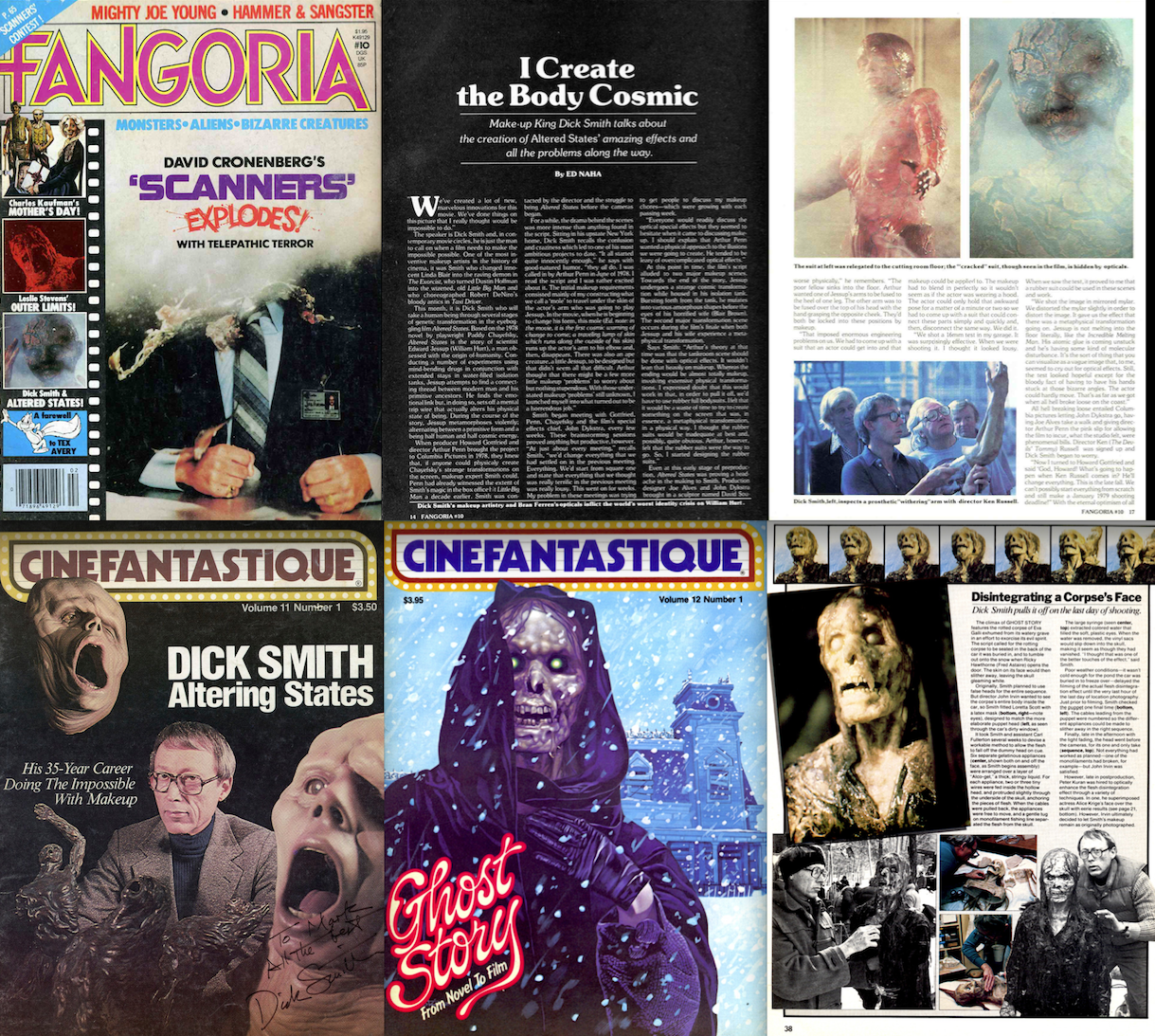 These are a few of the magazines that inspired Mark Shostrom. "My old VW bug broke down the day in 1981 that FANGORIA #10 on Dick Smith’s 'Altered States work' came out, so I walked five miles to get it," he writes. "It was worth every step."

nyone hoping to get into movie makeup - or any area of the film business, for that matter - has endless options of how to learn: internet sites, magazines, books, YouTube, Instagram, makeup schools, indie films… I began my makeup FX career on American Film Institute student films and low-budget Roger Corman pictures. I had little experience when I did them; but by the time I worked on films like Evil Dead II and multi-million dollar blockbusters, I had accumulated a lot - and most of what I learned, I learned on the job. I’ve taught more than 800 students at the two top makeup schools in America, but I am self-taught.

Dick Smith, Rick Baker, Greg Cannom - to name a few - were also all self-taught. Dick learned makeup from a terrible book in the 1940s. He tried things on the fly during live TV tapings at NBC in New York. If there was a screw-up, he had one or two minutes to fix it before it went on-air live. He wrote to Hollywood makeup artists asking how-to questions and they usually told him to fuck himself. He learned on his own because there was no other way. (And for those who doubt self-teaching’s merits, Dick got an honorary lifetime achievement Oscar in 2012.)

So how do you start? If you live outside Los Angeles, Atlanta, New Orleans, New York, London or other major areas of film production, you may be limited to what you can learn at home. If you’re lucky, you might be able to hop on an indie film being shot near you. How much experience the producers expect you to have may be negated by the fact that you’re the only person who says they can do the makeup FX for their film. A few makeup photos and a lot of enthusiasm may get you the gig. Plus, you may be their only option - which is good for you. You can get your feet wet and learn on the job. However you get on an indie film, I guarantee you will learn a lot as you go. Six weeks on a low-budget film set is like two years of film school.

Say you don’t live near a film production area; you’re in Montana or Manaus. How you learn depends on what you have to spend on tools to learn with. How well you learn depends on how passionate you are and how much time and effort you’re willing to put in to truly learn.

First, free stuff. YouTube. I Googled “YouTube makeup tutorials” and got 75 million hits. The most recent was posted nine minutes before I searched. That’s a lot of videos to plow through in the hope of gleaning some good instruction and information.

This is where my students would ask, “Mark, if it was you today, what would you do?” My answer would be, “I’d find experts whose work inspires me, study their work, and read what they’ve written.” And I’d probably add, “YouTube generally sucks for good instructional videos, but … there’s an exception to everything.”

One YouTube exception would be the Stan Winston School. They have a ton of excellent videos. Furthermore, they have an online school. The prices are more than fair, and you will learn from the absolute best people in the business. Rick Baker has both a YouTube channel and one of the coolest Instagram profiles out there. In addition, the MAC Cosmetics channel has half a dozen great instructional videos that Rick did for them.

Other free resources are Facebook groups such as Practical Effects Group (21,000 members) and MakeUpMedia Archives (3,795 members). Both are for professionals only and require administrator approval to join (P.E.G also has a questionnaire). Time to write a great letter and get a few of your best makeup photos ready.

On the Television Academy’s YouTube channel, you will find FoundationINTERVIEWS. This hidden treasure trove has 45 short clips of both Dick Smith and Rick Baker talking about their television work. Most interviews are about their film work, so this channel is truly a gem.

“How did you learn, Mark?” asked at least a hundred of my students. From four books: Richard Corson’s Stage Makeup; Vincent Keyhoe’s The Technique of Film and Television Make-Up; Dick Smith’s Monster Makeup Handbook; and Michael Westmore’s The Art of Theatrical Makeup for Stage and Screen. Oh, and every issue of FANGORIA, Cinefex and Cinefantastique from 1977 onward. These books and magazines can be found on Amazon and eBay and the cost for most is minimal. The information in them is as valid today as it was when they were published. One new book I am recommending sight unseen is Rick Baker’s Metamorphosis, (publication date October 2019). It has nearly 2,000 photos of work from his entire 40-plus-year career.

The last, but one of the best sources, is Dick Smith’s Advanced Professional Makeup Course. There was no other makeup artist more respected than Dick. His artistry and inventiveness were incomparable. His generosity with his knowledge became this study-at-home course. You can’t do better than Dick’s course, my highest recommendation.

I haven’t mentioned schools. That’s because - although I’ve taught at them - I don’t believe one needs a school to learn makeup or makeup FX. If you prefer a classroom environment, fine. I just don’t see how it fits in with learning an art form which requires primarily solitary practice (that would include you working on a model, because they usually have their eyes closed). Going to school will be a personal decision between you and your bank account (or parents/wife/husband/financier). The costs can be high, so do research. Also, check the credentials of the schools’ teachers. Are they really experienced pros, or do they only have a few years in the business? Forgot all that pablum you read like, “Instructor X has worked with the following celebrities…” Who gives a flying fuck that instructor X once put eyeliner on Cher or a blood drop on Tom Cruise’s knuckle? You want to see his/her real work.

In my mind, nothing beats trying something out. Buy some makeup. Get some old issues of FANGORIA and a makeup book. Ask your boyfriend, girlfriend, mom, dad or best pal to model. Watch a clip of Rick Baker doing a zombie with nothing but MAC beauty cosmetics and get fucking inspired! Try it, re-try, have fun with it. In a short time you will see yourself getting better and more confident. Always remember that every great makeup artist at one time had never done makeup before and they probably sucked the first time they did. Self-teaching will give personal satisfaction and confidence, a feeling you will always own and never lose. No matter where you end up, you can say to yourself: I achieved this on my own.