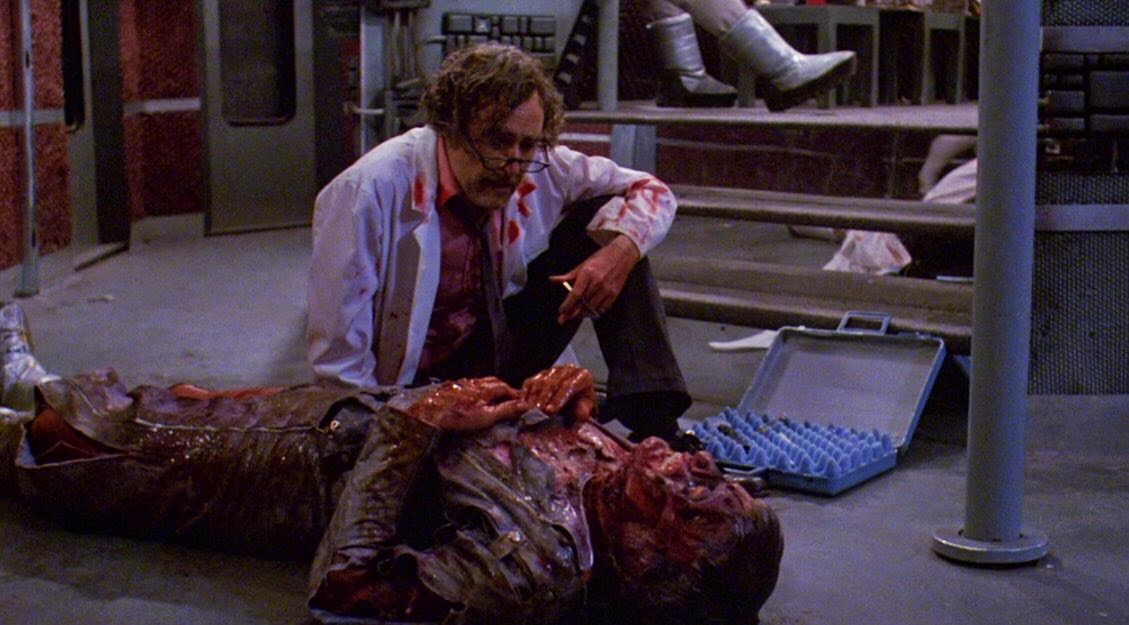 had landed a job at Roger Corman’s New World Pictures. To this day, I don't remember who called me, but in the spring of 1982, I ended up at Hammond Lumber in Venice, a few blocks from the beach. New World Pictures had taken over a few buildings in the rear of the lumber yard. They had sound stages, production offices, an art department and a makeup effects department. I found my way to the latter and met my boss, John Buechler. He seemed pretty casual, wearing shorts and flip-flops. In all the years I knew John, I never saw him wear anything else.

John brought me right to the set of Forbidden World, where I met the other monster makers on his team: Bart Mixon, Don Olivera, Anthony Showe and Chris Biggs. I had not read the script, but I could tell at a glance what I was in for. There were mad scientists, scantily clad women and a tumor in a bucket of fake blood - which John handed me. My job was to be tumor wrangler and stuff it into actor Fox Harris’ chest as needed. I reeled from the smell of the bucket. It was real guts. I coughed and asked why rubber guts weren’t being used, but John had already gone.

One of the guys said, “That’s what we’ve been asking him all week.”

Happily, my duties with the real guts didn’t last long. The five of us traded off on the sordid task and between takes, we would put the bucket in a refrigerator meant for crew lunches. Unfortunately, the odor of putrefying guts grabbed onto whatever was near and the smell never left. That first night, I could smell it on my shirt when I went home. The smell was still there after I washed it, and I had to throw the shirt out. Within a few days, the real tumor “accidentally” disappeared and Chris or Don whipped up a new one out of latex.

Our next assignment was to prepare some dissolved bodies of dead scientists and a half-dissolved victim on a lab table. The former were vacuum-formed shells with veins painted on and covered in a thick layer of Methocel, a semi-clear slime. The guy on the table was a more elaborate affair and led to my first performance in a film. The scene was: A half-dead guy grabs actress Dawn Dunlap’s robe at her waist. As she backs away screaming, the hand stays attached to her. John elected me to play the grabbing hand for the first part, and I crawled inside the table. Since I couldn’t see anything, I could only follow John’s shouted directions and hope I wouldn’t grab Dawn in too intimate a place.

There were lots of other smaller effects we all contributed to, but the last one would have to be in the category of “What the fuck did I just get myself into?” The finale involved the heroes killing the monster by feeding it - you guessed it - a tumor. The monster was supposed to vomit, then keel over dead. Steve Neill made the black rubber beast and John came up with the method to make it vomit. His idea was to have two guys inside the rubber monster mixing polyurethane foam and pouring it out the mouth. Polyurethane foam (called polyfoam) is a two-part liquid plastic that does three things when you mix A and B:

1.) It foams and expands quickly (a small cup becomes gallons in seconds)

3.) It gives off cyanide gas as it foams.

The lucky suckers that John chose to be inside the monster for this were Don and I, since we were the skinniest guys on his crew. I hadn’t worked with polyfoam much but was aware of its properties. Don and I took precautions -- lots of them -- but looking back today, what we all did then was extremely unsafe and potentially deadly.  Nobody was able to find painters’ full-body protective suits that late at night, but somehow someone came up with two pairs of pajamas. Don and I wore them over our clothes, plus double layers of what we called cow-puncher gloves. These were like regular latex or plastic exam gloves, except they went to your elbow. They were made specifically for gynecological inspections of cattle.

No, I’m not kidding.

Inside, Don and I were confined in essentially a sealed rubber chamber the size of half a tiny closet. We had gloves, respirators and goggles on, and we had our vats of A and B. It was well over 100 degrees in there, which meant the polyfoam would set really damn fast once we started mixing. We couldn’t hear clearly what anyone outside said. When we thought we heard the word “Now!” we mixed and dumped the shit as fast as we could down the creature’s gullet. We climbed out. The entire floor surrounding the monster was mounds of hardened polyfoam on the stage floor. It stuck better than epoxy and took hours to remove.

I saw the rushes the next day. To me, it seemed a lot of trouble to go through for what we saw, so I expressed this out loud. Someone asked, “What would you have used?”