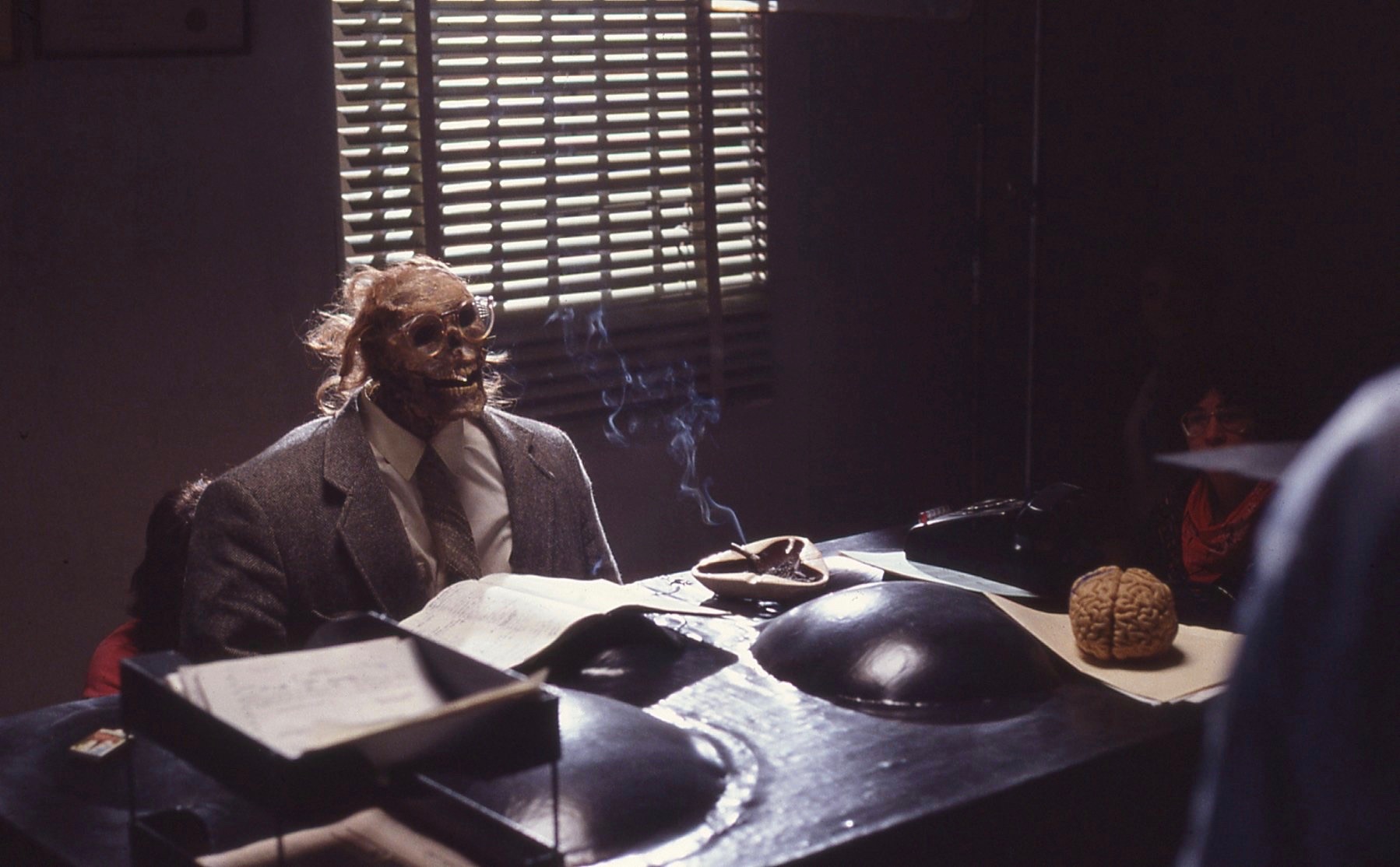 "Hello, nurse. I think there's something wrong with the doctor." (Photos: Courtesy of Mark Shostrom)

n the early 1980s, punk rock was changing music and MTV was changing television.  Music videos were being churned out by the hundreds. After Michael Jackson’s video for “Thriller,” directors and producers saw the value of using special makeup effects to augment their visuals.

In March of 1983, I was working with several guys at prop shop Ellis Mercantile, making weapons for The Ice Pirates. The rather mundane assignment was winding down when our boss said a friend of his would be coming in the next day. His friend was directing a music video, and if we brought our portfolios, we might have a shot at working on it. The next day we met Francis Delia. When he said his video was for The Ramones, I knew I had to do it. I loved The Ramones. Luckily, Francis liked my portfolio and hired me on the spot. I went into the project with my friend, Anthony Showe.

The Ramones song was “Psycho Therapy.” I had worked on 10 films by then but never a music video. It turned out to be much of the same process, only with everything reduced: less time, less money, shorter prep, shorter shoot. Like a mini movie. Francis’ job was to create a visual storyline around the song. He had developed a basic outline, but now that he had two eager makeup FX artists, he wanted our input to flesh things out. The first thing we did was have an afternoon-long brainstorming session.

Joey, Johnny, and Dee Dee, in keeping with their past themes of teenage lobotomies and being sedated, wanted the video to take place in an insane asylum. No surprise there.  They left Francis to figure out the details. The Jessica Lange film Frances was in theaters, and Francis and I both talked of how effective the asylum scenes in it were. Francis ended up styling the sets (and even a few shots) after it. He also came up with the idea of a character called the Teenage Dope Fiend (or TDF as we began calling him), who would have a lobotomy that didn’t quite take. Anthony and I suggested TDF’s head cracking open; Francis added the idea of a miniature version of TDF coming out of the hole in the head. He also wanted something weird in the doctor’s office, so I suggested a breathing desktop with veins -- I had just come off Videodrome, assisting Rick Baker on the flesh TVs, hence that concept. Then, Francis decided the doctor also should change and become a corpse. He got excited with each new idea, so our list of things to create kept growing. If this wasn’t ambitious enough, he wanted zombie surgeons peering down at TDF for the lobotomy shots.

By the end of the meeting, we had: a splitting head (repeatable); a miniature actor; a corpse doctor; five ghostly surgeons; and a breathing desktop.

We were shooting the video in 11 days.

Francis looked at us and asked, “Are you sure you guys can do this?”

Without hesitation, Anthony and I replied, “Hell, yeah!” It’s amazing how much enthusiasm you have when you’re young and green. And how little sleep it can lead to.

Francis trusted us a lot. He set aside 15 percent of the music video’s $10,000 budget for our effects. Spread over nearly two weeks, with two guys, that didn’t come out to much in the end.

But what the fuck - it was The Ramones. We had a chance to create some cool work and were tremendously excited.

It was an unseasonably cold spring, and we did the work in my garage workshop, mostly at night. Throughout the entire build, we were shivering and freezing. Our space heaters constantly frizzled out, so it was an ongoing battle to fight the cold. The splitting effect and miniature puppet of actor Robert Dennis (TDF) were tricky and time-consuming. Added to that, the cold and damp weather caused our fiberglass and latex materials to set far slower than usual. Instead of something taking one hour to dry, it would take three or four - and that was with heat guns and hair dryers going full blast on whatever needed to set.  That, along with our space heaters, caused the circuit breaker to keep shutting off.  Looking back, I cannot say that the conditions were fun.  They were miserable.

But what the fuck - it was The Ramones.

Midway through, I went to pick up a check from Francis. There were four girls standing next to him and he introduced us.

“Mark, I’d like you to meet The Bangles,” he said. Francis was simultaneously prepping The Bangles’ first video, “The Real World.”

It was great to meet four unknown rockers, but I really wanted to meet The Ramones. Francis said not to worry, I would. There would be plenty of time during our three-day shoot.

Our workload was mounting. The breathing desktop - my brilliant idea - was taking forever to construct. Layer after layer of latex not drying, veins and bladders being laid in by hand … it was turning into a nightmare project. Then we had to start making the TDF foam latex heads and miniature puppet. That meant putting our space heaters into the plywood oven - the only things keeping us warm had to be repurposed as the oven’s heat source. Getting more heaters for us was not an option - the breakers wouldn’t hold up. Anthony and I layered on more clothes and soldiered through.

Thankfully, the five surgeon corpses turned out to be the easiest thing: I had several Dick-Smith-inspired Ghost Story puppet heads I had previously made on my own. We were covered there. Still, we got a little behind, so I rang Francis to remind him of something we had discussed: shooting the effects close to the end of the schedule. He said no problem -- we’d do them on the third day.

Anthony and I did our final stretch of prep in one long 48-hour session. We would swap off taking 20-minute cat naps, but for the most part, we kept grinding through. We packed and drove to the set.

Francis came up and I asked, "So where are The Ramones?"

He replied, “Their schedule changed. They flew to New York this morning." Ahhh! Nooo!

We shot the effects for the entire last day and long into the night. It was grueling, it was exhausting, but it was so much damn fun. After the shoot, I drove home, calculating that I had been awake the better part of 70 hours. I fell to my pillow in dreamy slow-motion and slept for 18 hours straight.

Uncle Bob Martin, FANGORIA’s first editor, did a story on “Rock Video’s Gruesome FX!” in issue #35 in April 1984. He devoted a good chunk of the article to the “Psycho Therapy” makeup effects. In March of 2018, 35 years after we shot “Psycho Therapy,” my personal photos from the shoot went on display at the Ramones Museum in Berlin.