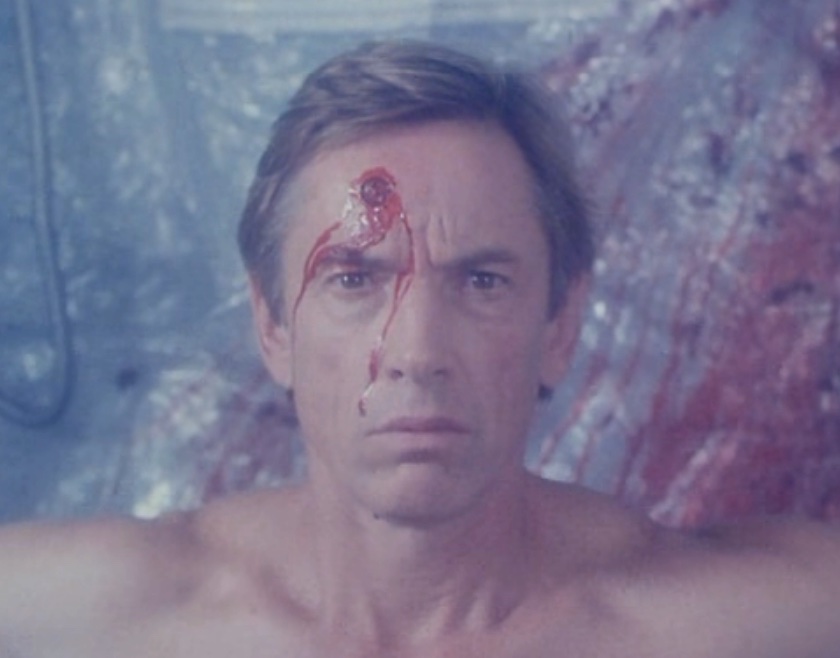 Scott Glenn ends up with a false forehead, probably after talking too much about the FBI. (Photo: Courtesy of Markk Shostrom)

needed to take a face cast of Scott Glenn for a film called Shadowhunter. Silence of the Lambs had just been released, so Scott was in the spotlight. My girlfriend, Michelle, happened to be production coordinator for the film, and it was through her that I would schedule Scott’s visit to my studio for the cast. I rang Michelle to arrange it. She told me she had met Scott that morning and he was in the office dealing with the costume designer. I asked Michelle what he was like. There was a pause before she replied, “Oh, he’s a real peach.”

In Michelle-speak that meant “pain in the ass.”

I knew because she used the term often for me.

She then told me Scott’s agent didn’t want him to come to my studio for the cast; I would have to do it at the production office - that afternoon. “Oh, great,” I said. “Now I’ve got to schlep a truckload of stuff down there.”

As was my habit in dealing with potentially challenging actors, I knew I had to find some common ground to make the process reasonably easy to get through. I’d just read in a Silence of the Lambs interview that in his prep for the film, Scott had met with criminal profiler John Douglas at the FBI Academy in Quantico, Va. My dad had studied at the FBI Academy. He wasn’t in the business of hunting serial killers, but it was a start. Somehow, these weird connections through my dad always helped.

I brought my gear down to the production office and set up to do the cast in a bathroom. Scott came in, grumpy at having to still be attending to things at the office. As I put the bald cap on, I mentioned I’d read about his meeting with Douglas and that my dad had gone to the FBI Academy. Suddenly Scott started rattling off non-stop about the FBI: Ted Bundy, serial killers, guns, ammunition -- you name it.

Although I wanted a full face, I only really needed his forehead. I kept the cast to that area to keep it simple and mostly to keep him talking. When I was finished, I patted him on the shoulder and said, “I’m done.” He hopped out of the chair and was gone.

That’s how we went through all our makeup sessions on the film. Scott would sit in the chair, I’d say a phrase like “bank robbers” or “.45 Beretta” and he would go off non-stop about firing stances, searching a room, cuffing a suspect … It was crazy. When I was done, I’d pat him on the shoulder with, “We’re done,” and he’d be up and out the door.

Michelle came to the set a few times when I had FX going, once for Benjamin Bratt cutting Scott’s throat, then again for the film’s climax. The latter involved Scott and Ben dangling off a cliff face, ending on Scott stabbing Benjamin in the eye with a rock shard. I poured a few ounces of Karo blood into Scott’s mouth and doused his forehead with a big splash. He was really uncomfortable; it was late, it was cold, but he let me gore him up without a word.

I went over by Michelle as they got ready to film. She was clearly perplexed as she asked, “How the hell did you get Mister Peach under your control like that? When he came to the production office, all he did was complain - to me, the costume people, the producer. What’s your secret?”

I smiled at Michelle. “It’s easy,” I explained. “I ask him things like how to un-jam a Glock or breach a door with a shotgun. You guys didn’t think of that?”

I walked off, leaving Michelle more confused than she already was.