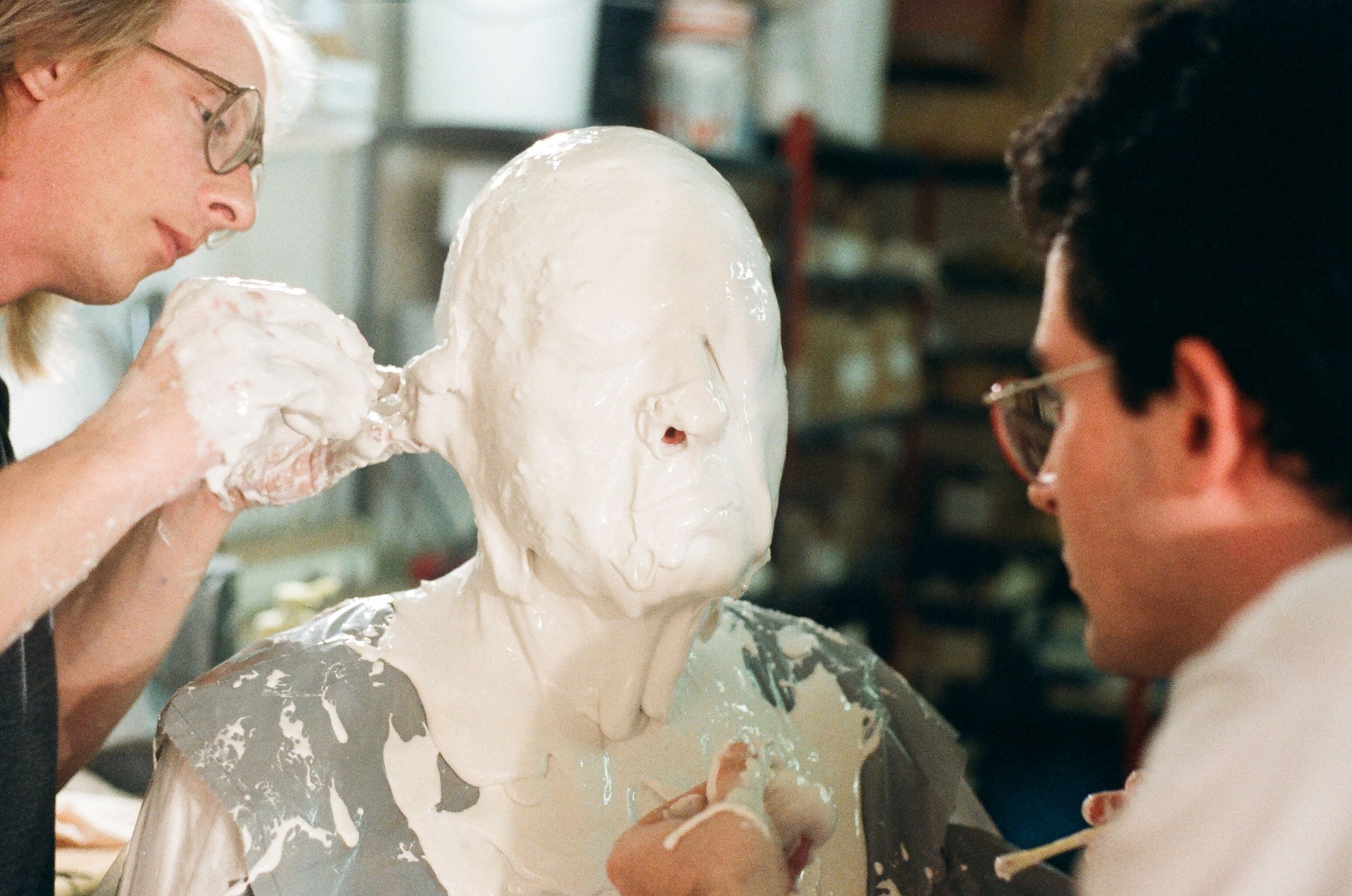 Mark Shostrom (and company) working on a life cast for "Phantasm II," in the way it's usually done. (Photos courtesy of Mark Shostrom)

reating a character makeup or actor replica all begins with a life-cast. The first time I tried doing one was in 1976. My subject was my mother, and I followed the instructions from a book. Unfortunately, it was the wrong book, and the author had no idea what he was doing. The experience was not pleasant for Mom (although we would laugh about it years later).

In the early 1980s, the main material for life-casting was dental alginate. Its big drawback was a two-minute setting time, so it was a scramble to get a good impression of an actor’s face in that short window. Doing a full head was even harder and required assistants and ”staggered time” batches of alginate, meaning you would start a second batch one minute after the first, etc. With that method, new alginate material was applied before earlier layers had completely set. You could also slow the set 30 seconds by using cold water, and with ice water have up to three minutes. I never subjected an actor to the ice water but did so with a few friends.

When the master, Dick Smith, discovered Teledyne-Getz Prosthetic Grade Cream, it was like the Holy Grail of life-casting had been found. It was finally possible to have five or six minutes to do a head cast - a significant breakthrough. Makeup FX folks could finally do expression heads, full bodies - all without the pressure of two minutes to do the job.

On Dick Tracy, we had to do a life-cast of legendary character actor Henry Silva to play Influence. He came in, and I heard him ask Doug Drexler who would be doing his cast. Doug pointed to me and brought Henry over to introduce us. After Doug left, Henry took both my hands in his and said in a serious, hushed voice, “I’ve had this done three times before and each time was a miserable experience. Is there any way you can do the cast but leave my eyes, nose and mouth uncovered?” Inside, I thought: “So basically most of your face?” But I could see how nervous he was so I replied: “Of course.” I always took an actor’s concerns seriously when it came to life-casting. Most people were fine with it, but occasionally I’d have a subject who was truly claustrophobic or had had a bad previous run-in, as did Henry.

I sat him in a chair in front of a mirror so he could see what I was doing. I thought that would give him a feeling of control, if even just a small measure. I also did the cast alone, figuring that a one-on-one situation would be more calming. I explained that he was in charge and that at any point he could ask me to stop, or even wipe the material off himself. I applied the alginate, making sure to keep to one side so he could watch in the mirror. I put the material as close as possible to his eyes and nostrils. He seemed okay, so I asked if I could cover his lips. He said yes, but not all the way.

Throughout the entire process he sat as immobile as a statue, looking at his reflection. I put on the plaster bandages. Henry kept staring straight ahead, hardly blinking. Covered in plaster strips with his eyes wide, I thought he resembled an accident victim with head trauma.

I pulled the cast off him and passed it to Greg Smith to pour up the plaster. After I cleaned Henry up, he stood up, still with that serious face. He shook my hand and said, “I don’t know where those other fellows learned to do this, but it wasn’t from the same place you did.” I had a fleeting thought of telling him about life casting my mom’s face using that awful book as a guide. Henry continued, “That was most pleasant. Thank you so much for accommodating me.” After he left, it was a bit of finessing to reconstruct the missing portions of his face, but it worked.

I was glad Henry had come that day and not the previous one, when we had cast a stunt man’s face. The guy was shaking like a leaf throughout, his hand in the “OK” sign even though he was obviously terrified. The man would jump off buildings and set himself on fire, but having some goop covering his face for 10 minutes was more than he could handle. I guess it’s all about feeling you’re in control.