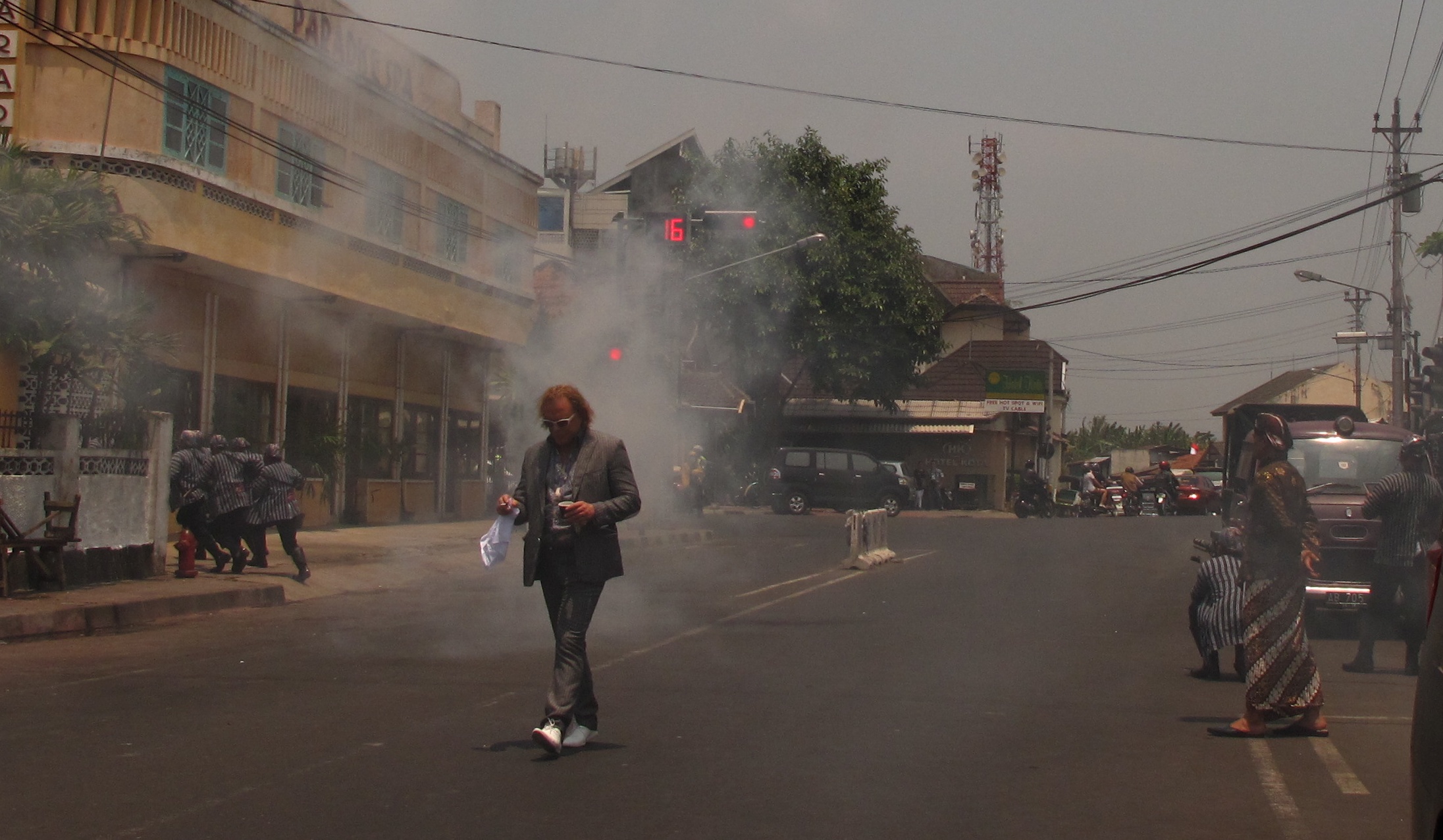 had been in Indonesia several weeks working on Java Heat. Shooting was underway but we had no villain and the villain’s scenes were quickly approaching. I recommended Eric Roberts to Rob, the producer. I had worked with Eric twice, a terrific actor and a total pro. Rob told me Eric was his second choice and asked if I knew Mickey Rourke. I said, “No.” For some reason, Rob was fixated on Mickey. I had heard rumors about Mickey, but generally didn’t listen to such stuff. I simply didn’t know what I was getting into. Whoever they got, I had to do the guy’s makeup for two weeks.

Finally, word came that it would be Mickey. He would arrive Thursday, do camera tests, costume, and makeup prep on Friday, and shoot Saturday. Then I heard Mickey didn’t want to do a makeup test. That meant whatever I did on Saturday would be shot and established; there would be no room for error. I had to find some common ground to handle him. But I couldn’t think of anything.

The film’s director offered me a “characterization” he had written for Mickey’s character. It began: “He was not ‘different’ as a child. He didn’t torture animals or play with imaginary friends, at least no more than any normal kid growing up in the suburban United States.” I rolled my eyes and hoped Mickey would never read it.

On Friday at wrap, I went back to my hotel room, still wondering how to get the upper hand. I researched Mickey and found nothing in common. As a last-ditch effort, I typed: “Mickey Rourke’s favorite movie.” Three words appeared on my iPad: The Deer Hunter. Perfect. As luck would have it, my dad had known Pierre Ségui, the French guy from the Thailand scenes.

I wrote dad immediately asking for anything he remembered about Pierre. Half an hour later, Dad’s email reply came: “Pierre served as a pilot in the French Air Force in Indochina. When the French left in 1954, he became a soldier of fortune in Southeast Asia. He flew a C-47 transporting ‘whatever there was’ to make a few bucks. I can't get into specifics about my association with him as this is classified information. You could say that his involvement in ‘various activities’ made him a good source of information. He opened a French restaurant in Bangkok. Mom and I ate there whenever we were in town. The last time I saw him was in 1981 when we stopped for a week in Bangkok on the way back to India. Mom had a bad cold and Pierre brought her some antihistamine tablets and treated us to some fine cognac.”

I pressed Dad, who admitted that “whatever there was” and “various activities” referred to Pierre smuggling guns, gold and booze. It was certainly better background info than torturing animals in a normal suburban childhood.

The next morning, I went towards Mickey’s coach. Everyone was on eggshells, including Rob the producer. I was the only one who wasn’t. I entered. Mickey gave me a bored look and said, “So, you’re the makeup guy, huh?”

He was busy flirting with his dialogue coach. Two minutes into putting a tiny scar on his cheek, Mickey was up, flirting again with his coach, lighting a cigarette, drinking coffee.

When he finally sat again, I said, “I’ve heard that your favorite film is The Deer Hunter.”

“No kidding?  Which actor?” asked Mickey.

“Well, he wasn’t really an actor, he was a soldier of fortune.”

Mickey stopped his flirtation and I had his attention. I continued, “You know that French guy in the sports car who takes [Robert] De Niro and [Christopher] Walken to the Russian roulette place?”

Mickey grabbed my arm and said, “No fucking way! You’ve got to be kidding!”

“His name was Pierre,” I said. “He was a smuggler who did side jobs for the U.S. government.”

Then Mickey said something I couldn’t believe: “I based my character in this film on that guy!”

Now it was my turn to say, “No kidding?”

I let Mickey read Dad’s email. I decided to test him. Putting foundation on him, I eased him into the chair. “You move too goddamn much. Sit still. I need to work,” I said.

Mickey sat back. “Do your thing, man,” he said. He remained immobile. Day one down, nine to go.

We came out of his coach, Mickey with his arm around me like a long-lost brother. Rob watched nearby. After Mickey departed, Rob came over.

“I thought you said you didn’t know Mickey. He acts like you’re his best friend,” he said.

I smiled and replied, “I’m told I have that effect on people.”