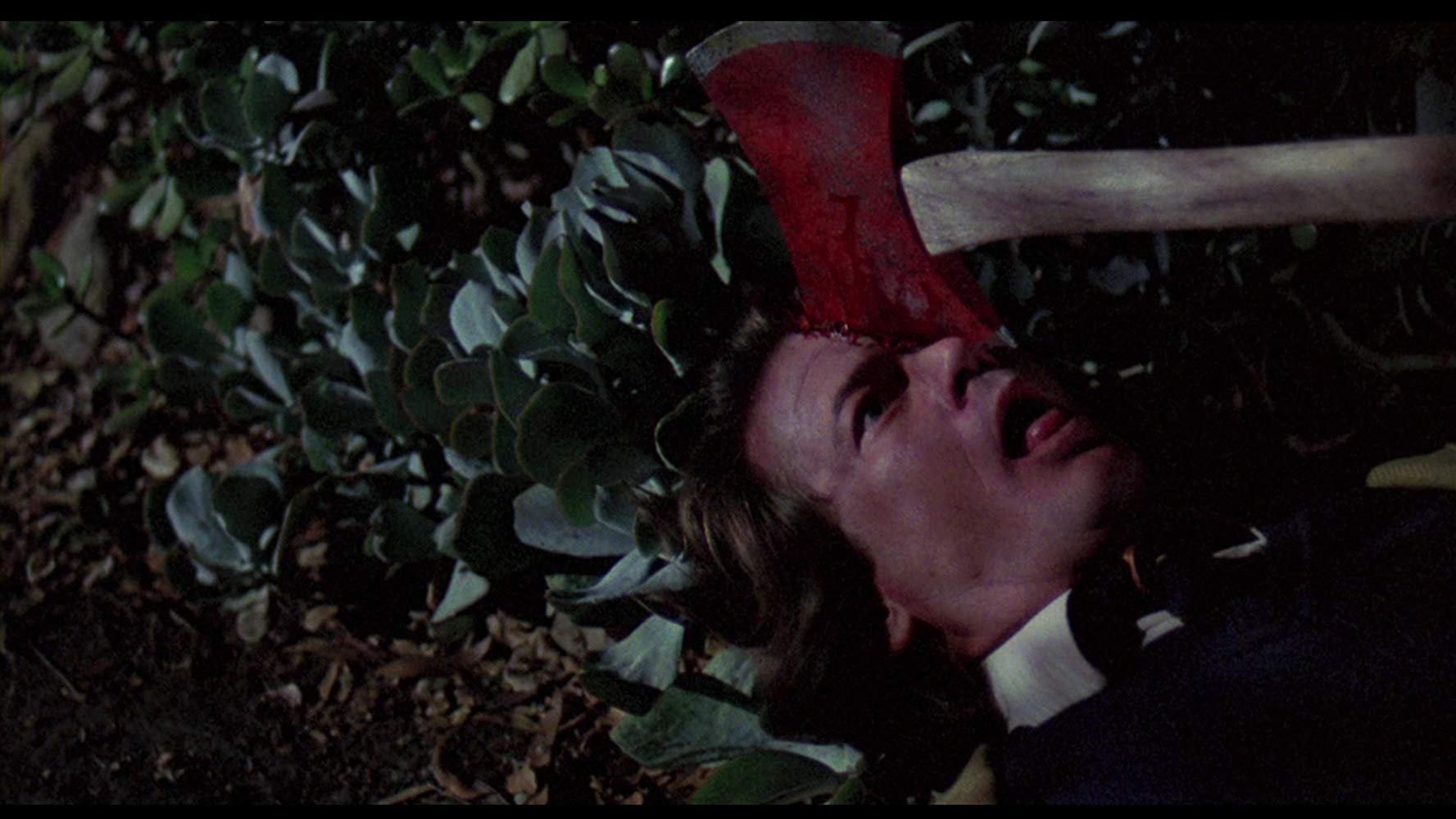 The first time Mark Shostrom ever heard the term "deferred payment" was dealing with this film: "To All a Goodnight." (Photo: IMdb.com)

n the last day of class in my teaching years, I would usually go outside to say farewell to my departing students. As they bopped gaily to their cars without a care in the world, off into the new world of working in movies, I envisioned a giant hand coming down and crumpling most of them like a ball of paper. Sadly, I knew many wouldn’t last long in the business. Occasionally, I’d get desperate calls later from some of them: “Mark, I’m having trouble getting paid. What do I do?”

I suspect many FANGORIA followers of the new generation have ambitions of careers in horror films. Whether you go into makeup effects, directing, writing, acting, set or costume design, there is a good chance you will start out in the low-budget world. Life is full of lessons, and usually the hardest are those you have to experience by falling on your face and getting banged up. Here are some hints to hopefully prevent you from attending too many classes at the School of Hard Knocks.

Always Get a Deal Memo

This is standard for most productions, low- or high-budget. The UPM (unit production manager) or line producer will usually provide one. If they don’t (like on an uber-low-bucks film), find a standard form online and tailor it to your needs before printing it. Make sure it specifies your job, duration of employment, payment, overtime, frequency of payment, kit rental, etc. Most of the areas you need to address will be in online samples. Make sure both you and the UPM/line producer sign it, and retain a copy for yourself. When you become a Ve Neill or a Bill Corso, you’ll have an attorney helping you and a 10-page (at least) contract specifying everything imaginable. Until then, go into each film — even the one-day jobs — with a deal memo.

(Note: A kit rental is a fee for usage, wear, and expendables in your makeup kits. Some indies may balk at this; it is standard on all union shows.)

This is a payment someone promises to make to you at a specified date in the future. That specified date is almost always ”when the film turns a profit.” That, in turn, is a swirling nebula  of determining gross and net profits. Some high-budget blockbusters have “never” turned a profit — on paper. So just think of how many low-budget ones truly never do.

I first heard this term in December 1980, in a meeting with the executive producer of To All a Goodnight. Although director David Hess (Last House on the Left) was a super-sweet guy to work with, this producer was a sleaze. He dressed and spoke like a late-night TV accident attorney, which should have been the first sign. He said, “For these effects, we will pay you three thousand dollars.” A nice chunk for a guy who’d only been in the business a few months. Then he added, “Eight hundred now and twenty-two hundred deferred payment.” I asked what that was and he replied, “When the film makes its money back.” I was young and green and signed on the dotted line. I figured since Friday the 13th was making boatloads of cash, I’d see the rest in six months.

I never saw a penny.

I’d ring the guy every so often for a few years, but it became clear my deferred payment was never going to materialize.

Deferred Payment translates as: You will never fucking see that money.

Do not ever agree to such a deal.

If They Don’t Pay You

If you’ve done the work and they simply won’t pay you in a reasonable amount of time, you have two options. One is small claims court. Each state has different laws and caps on the dollar amount. Sometimes just the threat of a small claim will get a production company to pay up. They know when they get bigger and apply for loans/lines of credit, any lawsuits against them will turn up and hurt their chances of getting approved.

Give them a deadline to pay you. Don’t bend, and don’t accept their excuses or delaying tactics. Con artists expect you to back down. Don’t. If you’re a naturally timid person, don’t talk on the phone with them while you’re sitting down. Stand for the call. You’ll feel braver and sound more serious. If you’re afraid of forgetting a detail, write out your bullet points. Then shoot verbal bullets at them over the phone.

People who don’t pay in the film business are rare, but they do exist. They’re bullies basically and are counting on you to not stand up for yourself. Like any bully, the shithead who owes you money will usually cower when you fight back.

A second possibility, if the amount is larger than for a small claim, is to find an attorney. Expensive, you say? You bet. But here’s a helpful tip: Most metropolitan cities have “lawyers for the arts” or something similar, which will have pro bono lawyers who help artists. Search the internet under ”free lawyers for artists” or something similar, or call a legal assistance hotline. I have no idea the dollar amount to qualify for a pro bono arts attorney, but I’d think between a small claims amount and a few thousand dollars.

I’ve always wondered why some people expect folks in the arts to work for free but not in other areas -- say, in business or retail. Does a bank bring on a new employee and expect them to work for free? Does McDonald’s assume you’ll work without pay? Fuck no. So why is it different for artists?

You may have the perception that you must work for free, starting out entry-level in the film business. Get that out of your head. Anyone who tells you that does not have your best interests at heart. Your makeup school’s student liaison person may advise you to do the first couple of jobs for free. Why, to prove yourself? My answer to this: Ask the producer or photographer you’re doing that job for about his/her knowledge of your state’s labor laws — so they can prove to you they know the laws they are breaking.

Anyone you don’t know who expects you to work for free is exploiting you, full stop. They may be nice, you may like them, you may start to believe what they tell you — but try paying your rent with their charming words after they stiff you. If I seem cynical and bitchy, understand that I have seen people taken advantage of like this, and it was painful to see them fall.

I had a student who heard me say the don’t-ever-work-for-free thing for nine weeks. She saluted me at the end and assured me, “Got it, boss.” A year later, I happened to see a Facebook post of hers: “Hey guys! I need makeup artists to help out on a zombie shoot this weekend. There’s no pay — but you will get pictures!” I felt pretty certain those zombie pictures bought zero groceries for anyone who signed up.

Do not work for free. You will only set yourself up to be exploited for that job -- and likely for the next one with the same producers. You will also be setting a precedent with producers expecting the next person they hire to do work for free. Once people have that mindset, it’s tough to change it.

The only exception with free work is a favor for a friend. Your pal is doing a music video and asks you to handle costumes for a week. You and your actor friends want to make a short film to sell your project. Your girlfriend/boyfriend is directing a horror film, and you know a little about makeup effects. These are the only types of exclusions I would go with. (Always say yes to your gf/bf for these things, unless you’re planning an early breakup.)

Respect your own worth. You’ve spent months/years learning your craft and have invested your time, money, toil, and sweat. Don’t let anyone ever downplay the significance of that. If your gut is telling you that someone is giving you a line of exploitative bullshit, your gut is probably right. Another door will open down the road and it will be a better one. That’s the one you want to walk through.

P.S. On the topic of artists getting paid, be sure to watch legendary writer Harlan Ellison’s clip, “Pay the Writer,” on YouTube.