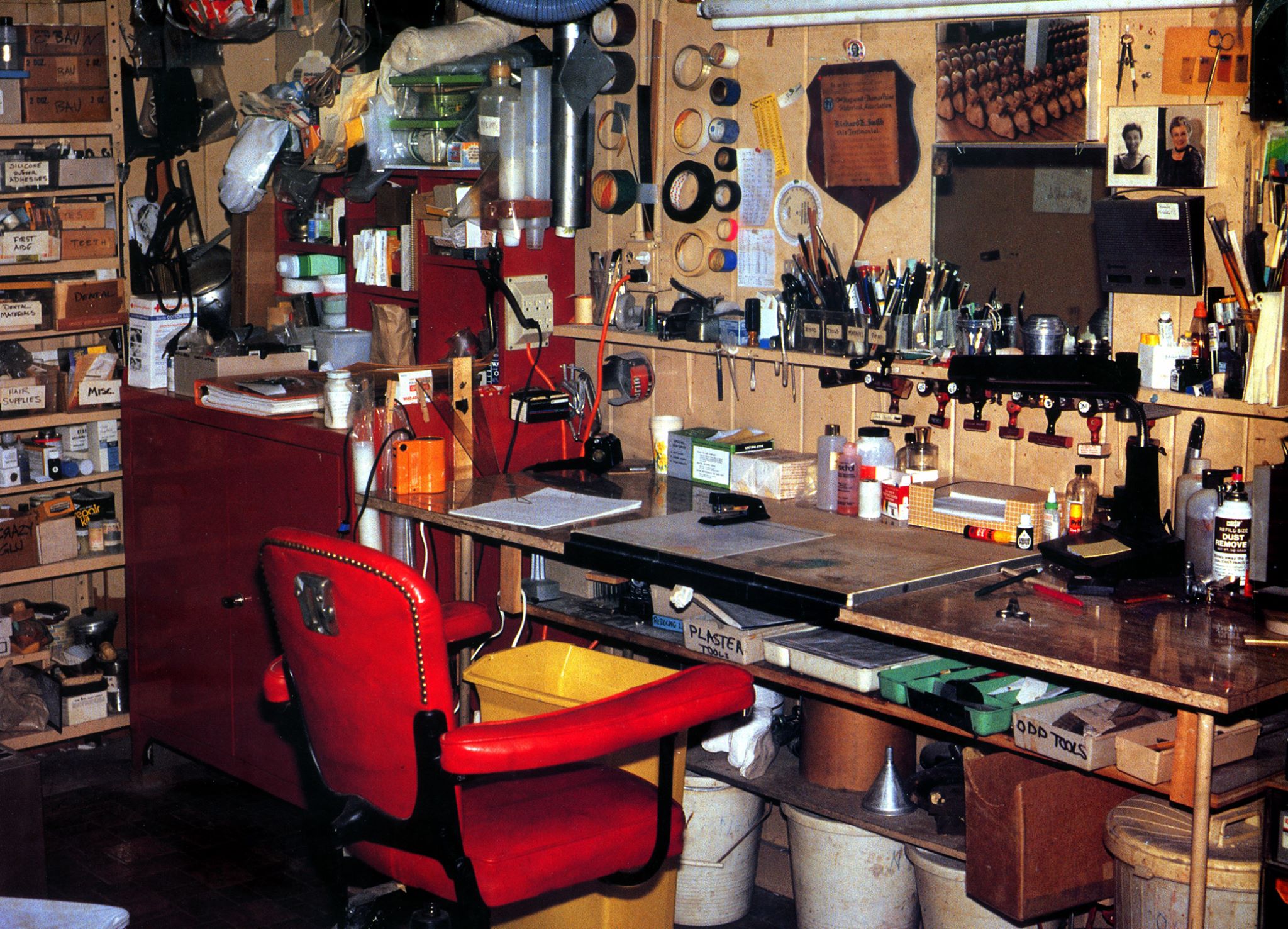 n 1985, Dick called and said he would be in LA and would like to meet up. I invited him to my new shop. On the day Dick was going to be there, I gave my girlfriend, Shan, explicit instructions: “I still don’t have a photo of the two of us. Dick’s arriving at one o’clock. Come over at two on the dot and take a photo of us together.” She promised she would.

Dick came out, and we chatted for hours. My Pentax sat on the workbench beside us. 2 p.m. passed, then 3. Finally, Dick had to go. I ran around the corner to my place. Shan was working on a painting.

“What happened? Why didn’t you come?”

Shan was an artist and regarded all the best artists with deep respect. She said, “I’m sorry… I’m so in awe of his talent, I was afraid to meet him.”

Dick and I corresponded during my three months in North Carolina on Evil Dead II. He made sure to forward his Advanced Professional Makeup Course installments to me there. I told the production coordinator to come find me on set and hand-deliver anything from Dick Smith - no matter how busy I was. Whenever an installment came, I would devour it and try Dick’s techniques the next day. One chapter had gel makeup formulations; I totally changed Henrietta’s face makeup the next day and started using Dick’s gels from then on.

In 1987 and 1988, Dick and I worked on a few projects together. He consulted on Poltergeist III, which I did a lot of life casts for. He also consulted on Laurel’s TV show Monsters! and recommended me to producer Mitch Galen to direct an episode. I wasn’t interested, but Dick urged me to at least read a few of their scripts and consider it. I’m glad I listened to him, because doing that episode eventually led to me writing. Dick recommended me again to Mitch for Tales From the Darkside: The Movie, but I bid too high and the job went to others.

I saw Dick a few times in the 1990s and we spoke often. I got into the union and started doing 80-hour weeks on Star Trek.  Suddenly, it was a new century; what they say about time passing faster as you get older is true. Dick retired and moved from Larchmont, where he had lived his whole life, to Sarasota, Florida. He was working every day assisting people who had taken his Advanced Course. He never seemed to slow down.

In 2006, I was on the verge of getting a major US-China co-production, The Rape of Nanking. I emailed Dick to ask if I could use him as a reference. He wrote back: “Hi Mark, Great to hear from you! Of course you can use me for a reference. I’m still working full-time and am planning a way to reduce my hours/work by the end of the year. I’ll be 85 in 2007. Hope you get that film. All the best, Dick.”

Later that year, we got to spend a few hours together when I happened to run into him at the makeup school where I was teaching. Dick was, by chance, in an assisted living facility two blocks away. He had taken a stroll, saw makeup in the school’s store window, and decided to stop in. It was blind luck that I popped into the store as it was after 5 p.m. and I normally would have left already.

We hugged and had a nice one-on-one talk. Many decades had passed since this man had come into my life. We had met when he was 61 and I was 26. He was now 88, and I was 54. I asked if he would like me to show him around. It didn’t take long for word to spread that Dick was in the building. Pretty soon the heads of the school ‘“accidentally” showed up, and we had a small throng of students following us.

I took him into my effects classroom where several of my students were sculpting late. They knew from my many talks about Dick how respected he was. Everyone stopped working and gathered, in awe at being in the presence of such a legend. Soon, they were won over by his warmth and humility. One of my students snapped a picture of Dick and me together. I finally got my photo with Dick, but it mattered less because by then I had so many wonderful memories of my times with him.

He told us a funny story about his live TV days at NBC in New York. Then something else happened. One of my students asked him what working on The Exorcist was like. Dick paused in thought and said, “I don’t recall working on that film.” I had to fight the feeling that hit me; I didn’t want my students to see me cry. Dick related more stories, one that he repeated three times, not remembering he had already told it.

After an hour and a half, I walked Dick back. We gave each other another big hug and I watched him go. I didn’t know it would be the last time I would see him.

The 12-year old boy in me still looks back on the day his mom gave him a book with a man named Dick Smith in it. And this 63-year-old man feels truly blessed to have known him.