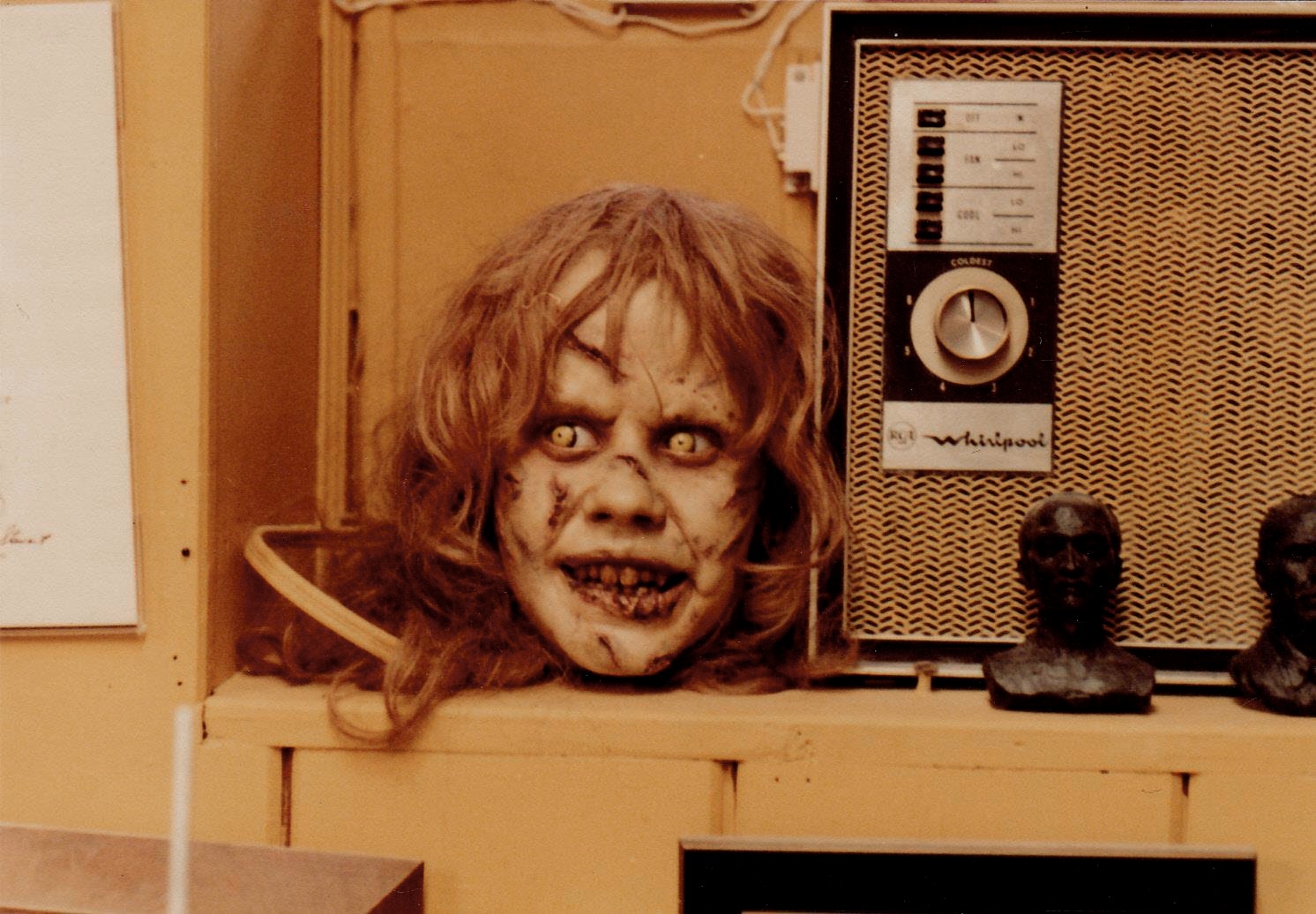 n April 1983, I made a deal with The Mutilator director Buddy Cooper to fly my partner, Anthony, and I to North Carolina via New York. The logical route would have been through Washington, D.C., or Charlotte. I think I used some vague excuse like we had to “consult” with Dick Smith. Of course, Dick did no consulting on that film; -- it was just a way to get to meet him. It was like a pilgrimage to meet a holy saint.

Spending the day in Dick’s magical basement workshop was unforgettable. He showed us the Ghost Story Alice Krige puppets, which he knew I had a big interest in. Next to Linda Blair’s spinning head from The Exorcist was Fred Stuthman, the eye-stab ghoul from The Sentinel. Sadly, the gelatin eye plug was overgrown with mold.

Anthony and I were there from morning until after dark. We asked Dick hundreds of questions. Not once did Dick ever divert from us for anything. He was patient, generous, and he gave us his complete attention the whole time. He explained in great detail how he created anything we inquired about. Midway, he took us to lunch, and, on the way back, encountered a driver coming toward us in a one-way alley. Dick honked his horn and waved his hands, saying, “Come on, you idiot!” My God, I thought, Dick’s human - and he drives just like my dad! Although I had my camera the entire day, I was so overwhelmed by his presence, his kindness and his stories that I forget to get any photos.

Later that year, Dick started The Hunger. I had just finished two feature films back to back, so I felt like a pro. I phoned Dick one day to ask something and popped a question out boldly: “Dick, do you need some help on The Hunger?” He replied, “If you lived out here, I’d be open to bringing you on. But I’ve got a small crew, all local guys. It’s just not practical.” I said thanks and hoped he didn’t mind me asking. I must have sounded glum, because Dick added, “Your work is good. It gets better each time I see it. So it’s not that at all, it’s logistics. I want you to know that.”

In 1984, I got a job with a photographer, a photo ad for Caremark Health Care. It required me to age a man from 30 to 85. It was the type of job Dick would ask for three months. I had 10 days to sculpt and mold all the aging stages. All five makeups would be done in a two-day shoot. Anthony helped with molds and foam-running. While foam was baking, I adjusted wigs and hairpieces, made bald caps, even a denture piece. I was extremely ambitious, worked my tail off and got very little sleep.

I mailed Dick photos of my makeups. Within a week, Dick mailed me a copy of the final ad he had clipped from the Wall Street Journal. He complimented me on the quality of my work. Not long after, the phone rang. It was a producer doing a Pacific Bell commercial. They wanted to show two old friends talking on the phone - and aging - over decades. I will never forget the guy’s next words:

Unfortunately, the commercial was re-made into something else and they didn’t go with prosthetic makeups. But to be recommended by Dick… I cannot describe how that validation felt.

In early 1985, I planned a two-week trip to New York with my girlfriend. I rang up Dick, and he said to come by and spend a day. I arrived a week later than expected and rang him to arrange when to meet. He said, “I’m flying to LA tomorrow for the Oscars.”

He had been nominated for the Old Salieri makeup in Amadeus. We arranged to meet the following week, since I would still be in New York.

After Dick returned, I took the train to Larchmont and he met me at the station. Arriving at his home, we went down to his basement workshop. At the first turn in the steps, there were cans of corn and peas. Rounding that turn and descending, you got your first glimpse of the treasures below: David Bowie’s plaster head and a cross-legged mummy from The Hunger. Dick’s workshop was legendary, but it was also tiny. It was slightly mind-numbing to think of how many classic moments in cinema had been created there.

“Oh, I don’t have it,” Dick replied. “They have to engrave it.” But he did show me something I found equally impressive: On his workbench was a stack of telegrams, cards and letters a foot high. Dick picked one up. “All congratulations. Some are from people I haven’t heard from in 20 years.” I may be wrong, but I felt from the look on Dick’s face that those telegrams meant as much —-- or more — to him than a golden statue.

I had brought my camera again, but to be honest, whenever I was with Dick in his workshop and he was showing me things, the last thing on my mind was a photo op. He showed me the Amadeus molds, freshly painted appliances he hadn’t used for the film, and explained his new discoveries. He pulled out a slide projector and showed me his step-by-step of the application. I was staring at the slides projected on the wall when Dick began shouting, “Look! Look!”

And he said, “No, look! Behind you!” I turned. Dick was holding the hair back from his forehead. “Salieri’s forehead. I used my forehead.”

We both started laughing.

To be continued in Part Three (Read Part One here.)