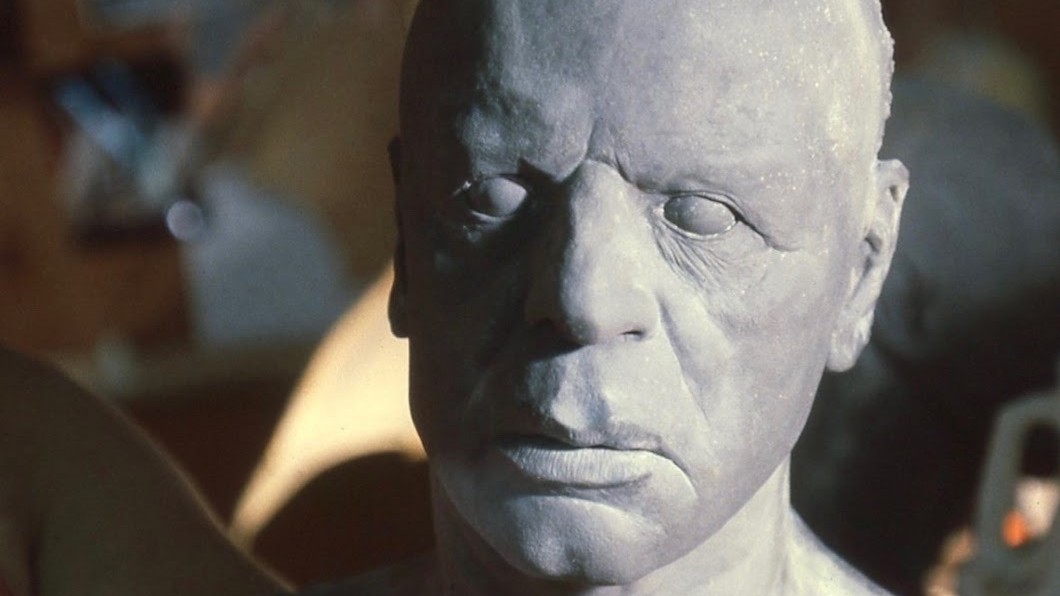 orbidden World had barely finished when John Buechler started another Roger Corman movie at New World Pictures. Anthony and I stayed on, but Bart had to return to his day job in Houston. Bart and I had become good friends, and I was sad to see him go.

John’s new project was Android. One of the effects he was asked to create was an animatronic head of Klaus Kinski, who played an android. If you think that sounds a bit like Bishop in Aliens, I wondered the same thing. James Cameron worked on Android as well, so perhaps?

The first order of business was to get a full-head cast of Klaus. We were to do this in Klaus’ suite at the Chateau Marmont. Director Aaron Lipstadt joined us. I don’t remember Klaus greeting us or even shaking our hands; he focused on Aaron, with non-stop talking and wildly animated gestures. He wouldn’t stop moving while John and I were getting the bald cap on, and at one point his movements caused me to almost cut his earlobe off. Honestly, I don’t think he would have noticed. John did, however, and said quietly, “Let’s just do the face.” From our shared looks, John and I knew better than to be too ambitious with a moving target. Somehow, we managed a face cast and made a clean getaway.

I had to take off for a few days on another commitment. Coming back to New World, I found Anthony alone in the lab. The finished Klaus head with cables coming out of it was on a work bench.

Anthony said, “Luckily, Klaus hasn’t seen it yet. And production is doing their best to make sure he never does.”

I could see why. The head looked almost nothing like Klaus. The main problem was the eyes, which pointed in different directions; one down and right, the other up and left. John came back and Anthony and I teased him about the head.

He kept a serious face and said, “It’ll work fine.”

The animatronic Klaus head was shot when Klaus was not around. I was working on something else in the lab, so I did not go to set for filming. John came back in, somewhat flustered, and told me Aaron now wanted to see the head actually getting ripped off. Since John was,, busy with yet another film that had come in, he asked if I could handle that effect. I said I would. He added that Aaron wanted to see a sketch of this relatively simple effect and I said I’d do that as well. John’s idea was just a neck up to the chin, but I wanted to do a whole new Klaus head. We went back and forth on this awhile, not arguing, just each determined to get his way.

That night at home, I did a rather elaborate drawing of Max 404 (Don Opper) pulling off Klaus’ head. John thought it was too much. When I showed it to him and Aaron, Aaron said, “Make a whole new head.”

Aaron left and John cocked an annoyed eyebrow at me:

“The deadline’s in two days, so you’d better get busy.”

I did a clay press-out of Klaus’ face and re-sculpted it with eyes open, adding nose texture and correcting his lips. John wasn’t happy that I was going into so much detail, but he let me continue. Anthony helped me with the Ultracal molds. We baked them to dry them out since foam latex would not work in a new, wet mold. Moisture affected the setting of foam latex greatly; the surest way to screw it up was to put it in a new mold. Sculpting, molding and drying out the molds probably took 16 hours. That left less than a day to get a few hours of sleep, run the foam latex, bake it for 4-5 hours and paint the thing, hair and eyes. That was assuming the foam latex run went fine.

“Running foam” means mixing latex, ammonia and two other chemicals in a kitchen Mixmaster for about 15 minutes, then adding a gelling agent at the end. The gelling agent causes the entire mixture to coagulate into a mass within a few minutes. Ammonia level affects how fast or slow the gel happens. Once the gelling agent is added, you have a scant 1-2 minutes to pour the mix into a large injector and fill your mold

I should add that, back then, there was only one foam latex available: Schram Foam.  A few years later, other brands would arrive, all superior. Schram Foam’s biggest drawback was its inherent unpredictability. You would follow directions exactly and it would do something different each time: set fast, never set, set and collapse…  … Today’s foam latex formulas make the process easier than baking bread. In 1982, it was like working on the fucking Manhattan Project and getting ready for the Trinity test.

Although our molds were dry, the weather wasn’t. That night, it started to rain, and it did not stop. Moisture in the air affects foam latex as much as moisture in a mold. We tried foam run number one. The stuff gelled in the bowl. We cleaned up and re-set. Downtime: 45 minutes. It was going to be a challenge -- and we had to shoot the effect in now less than 12 hours.

Foam run number two: We successfully injected it into the molds, but it never set. Downtime: 90 minutes. I don’t recall how many runs we tried that night -- at least four or five. I remember working frantically as the sun rose to get it painted. We glued hair on it, jammed in the eyes, and ran to set.

Anthony and John made a robot section to go inside the neck and the art department added some blinking lights. Since I knew best how to operate the effect, Aaron had me put on Max 404’s costume and do the ripping off for the shot. Aaron commented that my Klaus head looked better than John’s, which made things awkward. John insisted that my forearm cover the Klaus face for the shot and that it was framed really tight, pretty much covering up all my work. I was pretty pissy about this with John afterwards and told him, “I was just trying to make us look good.”

I stayed on for a while and did some mold work on a few other films with John. He was, by then, sculpting a lion creature for Sorceress. The sculpture was about 16 inches tall and a few feet long, a standing lion body with wings. Whenever John was called into a meeting with Roger Corman (which was frequently), Anthony and I would sculpt a perfect asshole on the lion and turn it so its butt faced the door. When John came in, it was the first thing he saw. “Goddamnit, you guys,” he’d say and mash clay over our work. The second time it was sculpting tools poking out of its ass. “Goddamnit,” he’d mutter, pulling them out.

Finally, a tiny smile would cross his face so we would beg him to do his imitations. John could imitate anyone flawlessly. We’d egg him on for his obscene versions: Jimmy Stewart as Sport in Taxi Driver or Sean Connery playing Tony Montana in Scarface.

We had a different way of working, but John and I were always friends. Whenever I remember him, it’s in that crazy rundown lab in the lumber yard, late at night, laboring long hours but also laughing a lot.

John died in March of 2019. He gave countless monster kids their first jobs in the FX industry, including me. I will always be grateful for everything he did for me. If a person’s legacy is in how many lives he touched, then John is surely riding a golden cloud now.