Mark Shostrom’s War Stories: "And They Need It When?" 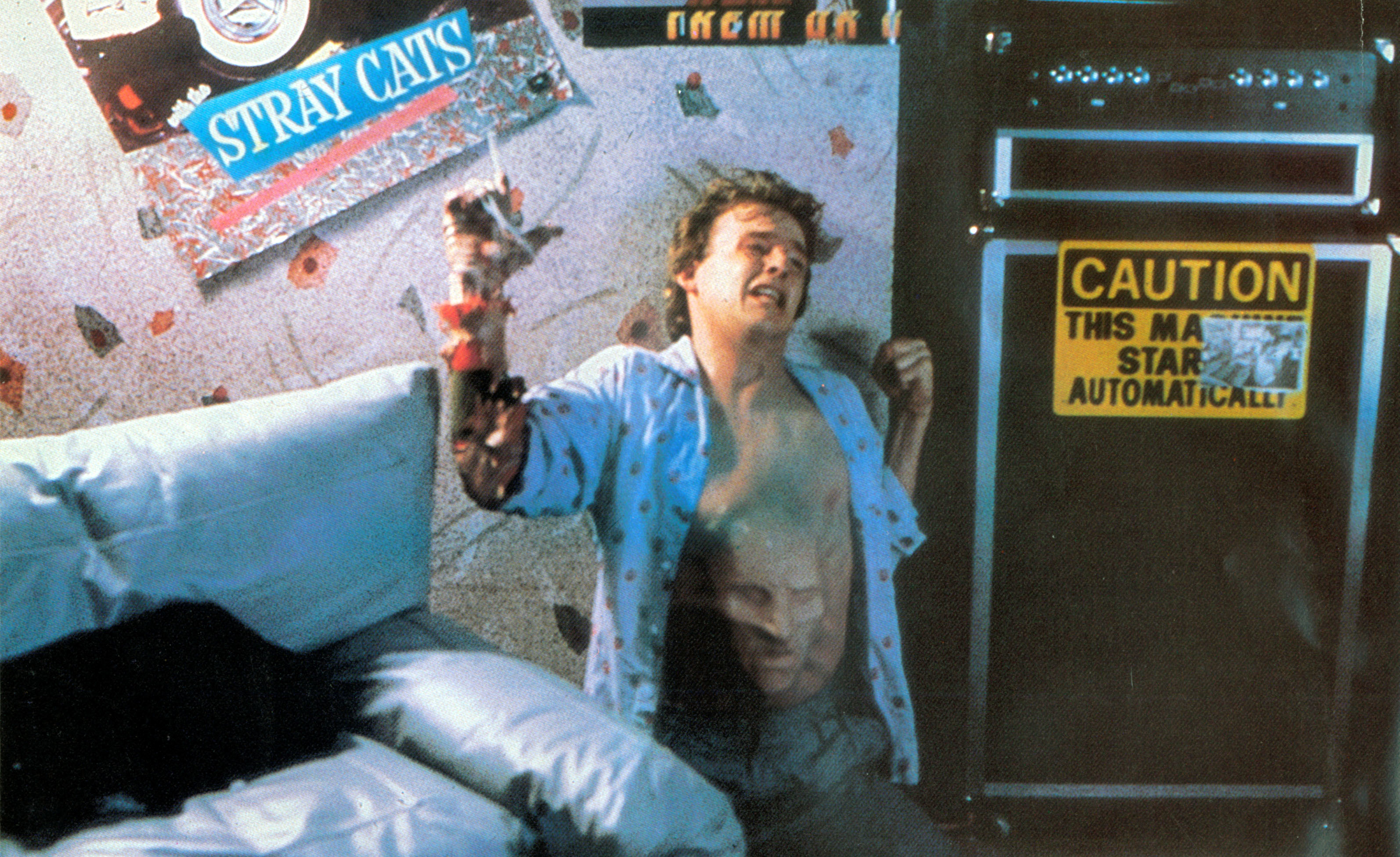 Mark Shostrom’s War Stories: "And They Need It When?"

n November 1984, Bart Mixon and I decided to take a break one night from our work on The Supernaturals and go see a film. We picked A Nightmare on Elm Street. Little did we know that six months later, we would be working on the sequel, Freddy's Revenge.

My old friends Michael Murphey and Joel Soisson landed the job of producing the sequel for Bob Shaye, CEO of New Line Cinema. Michael and Joel, in turn, hired me. For the demanding project, I brought in a crew of my favorite artists: Bart Mixon, Gregor Punchatz, John Blake and Anthony Showe.

I asked for 10 weeks to prep and two days to shoot the transformation sequence of Freddy (Robert Englund) bursting out of Jesse (Mark Patton). The only other effect I was contracted to do was the demonic tongue that Mark develops while making out with his girlfriend, Lisa (Kim Myers). We lost two weeks of our prep waiting for Mark Patton to be cast and another half week moving from my tiny workshop to a proper studio. The latter was worth the lost time as the new shop was 10 times the size of my old one. One drawback was that it lacked air conditioning, and temperatures in southern California were consistently around 100 degrees for most of that summer.

The transformation scene was scheduled for the end and would be a second-unit deal.

By mid-June, the production was several weeks into filming, doing all their location stuff before moving into Raleigh Studios for interiors. Their most distant location was at Kaiser Steel Mill in Fontana, where shooting took place for the finale in which Freddy melts, Jesse returns and Lisa takes him in her arms.

Michael and Joel left a message requesting that I come out to the steel mill to talk. I tried reaching them but had no luck, so I headed out. Today, with mobile phones, I could have avoided the journey. It was a 100-mile round trip; in LA, mid-week traffic meant three hours there and back. When I got there, Michael brought me aside with Joel to discuss a problem.

“We need to see some kind of transition after Freddy melts and before Mark comes out of his fetal position,” said Michael.

It was one of those things that read in the script like a nothing visual; that was likely the reason nobody picked up on it. The script said: “The corpse turns to her — it is Jesse, his clothes smoldering, his body signed and blackened with soot. But alive, coming around as if it were all just a bad dream.” Blackened with soot was clearly a simple straight makeup thing. Kevin Yagher hadn’t planned any effect, and I certainly hadn’t.

“We need to spice it up, and wondered if you could cook something up in your magic kitchen of special effects,” said Joel. Looking at the scene being blocked, I agreed it would be a humdrum ending if it didn’t have more of a punch. Kevin and his assistant were stuck there doing Freddy and his melting head. That left me. Joel asked how long it would take to put something together.

“Are you still at this location tomorrow?” I asked. Joel and Michael smiled and shook their heads. Kaiser Steel Mill was a money-shot location; you could not duplicate it by fudging a background later. I looked at my watch; it was after noon already. I smiled, said, “Fuck,” and ran to find a phone.

We needed to create a cool effect and in record time:  no room to test, no room for error. Rick Baker often said, “You’re only as good as your crew.” I trusted mine all the way, and now the shot depended on them coming through.

The production trailer didn’t have a phone, so I hiked down the road for a payphone. I fished in my pocket, hoping I had a few quarters because Fontana was a long-distance call. Finally, I found a booth and called my shop. I explained the situation to Bart: “They need a burnt Freddy, which Mark can peel off in sections from his face and head.”

“And they need it when?” asked Bart.

I got in my car and headed back to my shop. During my 90-minute drive, Gregor took a life cast of Mark Patton and applied alternating layers of latex and cotton as a flexible base. Because of the heatwave, the multiple layers dried quickly. Somewhere in my shop, I had a few boxes of material to make paper-mâché. I had no specific reason for buying the materials -- I just thought they might come in handy someday. Gregor found them. He mixed the stuff up but instead of adding water, he used acetone and water at a 50/50 ratio. He figured (correctly) that it would help the paper-mâché dry faster, as acetone evaporates faster than water (almost instantly, in fact).

After it dried a bit in the sun, he used a heat gun to finish drying it as he sculpted the visage of charred Freddy. He painted it with artist acrylics, then, as the last touch, he and John Blake burned the surface to add authenticity to the charring.

I arrived back and pulled into the alley. Greg and John were standing there, covered in sweat and what looked like chocolate sauce (the acrylic paint). Greg was holding a paintbrush and John had a propane torch. “How’s this look, boss?” they asked.

It was fucking beautiful.

The burned husk fit Mark perfectly and looked like Freddy. Back to the steel mill we went (I think Bart came with me). We cut the husk into sections. Makeup artist Daniel Marc covered Mark Patton’s face in reds and blacks, and I added a layer of slime. We slipped on the husk sections, shot the effect, and production wrapped at the mill.

Gregor’s artistry and ingenuity saved the day. The result in the final film? You hardly see the effect because Mark is facing down as he peels it off. ‍

Mark Shostrom began his 35-year career at the birth of the golden age of practical makeup effects in 1980.  He designed the special makeup for cult classics Evil Dead II, A Nightmare on Elm Street 2 and 3, From Beyond and Phantasm 2 and 3.  Moving into television, he won Emmys for The X-Files, Buffy the Vampire Slayer and Star Trek: Voyager.  He can be found on Twitter and Instagram under his commonly used pseudonym @markshostrom. His blog is: https://markshostrom.weebly.com