Lucio Fulci: So Much More Than The Godfather Of Gore — DON'T TORTURE A DUCKLING At 50

There may be no filmmaker who better exposes the illusionary dichotomy between art and trash. 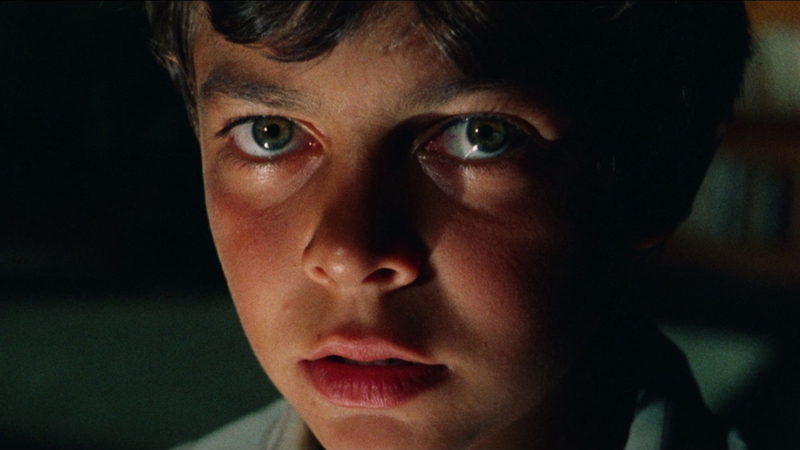 Lucio Fulci "was sort of an Italian Hershell Gordon Lewis," Roger Ebert wrote in 1998, dismissing The Beyond as a plotless and dim-witted movie full of bad special effects and worse dialogue. It's not surprising that Ebert didn't like The Beyond – he thought Friday the 13th was disgusting enough trash to warrant a letter writing campaign, after all – but what is surprising is how much Fulci's legacy is framed more or less as Ebert had it, just with a positive inflection.

"There is more than one candidate for the title Godfather of Gore," Anne Billson writes for The Guardian, "but Italian film-maker Lucio Fulci can lay greater claim to it than most." It's a well-earned moniker. I mean it as warmly as possible when I say that The Beyond is the grossest movie I've ever seen: the scene where tarantulas eat a man's face makes Peter Jackson's splatter films look like Saturday matinee fare. It was the first Fulci film I watched, and I instantly fell in love. Fulci's effects are extreme in ways that can be incredibly funny, sometimes devastating, and always squirm-inducing. And when The Beyond isn't being gross, it has moments of incredible beauty. It comes as close as any film has to capturing the syntax of a nightmare. 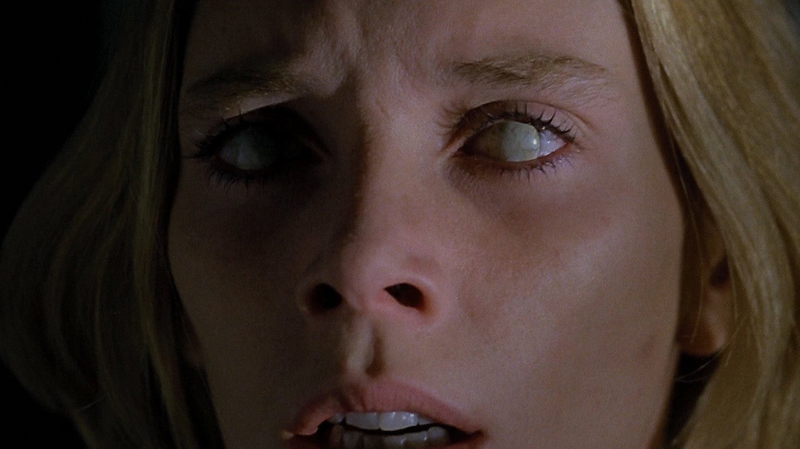 The problem with the nickname Godfather of Gore – a title also given to Hershell Gordon Lewis – isn't that it's untrue, it's that it's insufficient. It relegates Fulci's artistry below his peers: if Dario Argento is an artist – enough to get Ebert to praise a scene where a killer hacks through a door – Fulci made enjoyable trash, strictly for gore hounds. But that's, at most, half the story. Zombi 2 is a movie about how colonialism and contagion interact and a movie where a zombie fights a shark. Four of the Apocalypse is a blood-splattered spaghetti western and a profoundly moving film about love, death, and the class delimitations of criminal justice. A Lizard in a Woman's Skin deconstructs the conventions of giallo only to put them back together again and has a bit out of nowhere where the protagonist sees a bunch of dogs split open with their hearts still beating. The Godfather of Gore label, as Senses of Cinema's profile on Fulci explains, misunderstands the "true vision beneath, yet elaborated through, the gore." There may be no filmmaker who better exposes the illusionary dichotomy between art and trash.

Don't Torture a Duckling is a giallo, and emphatically so. One of the trashier genres in Italian cinema, the world's number one producer of great trash, the giallo lies somewhere between the ever-shifting, amorphous conventions of film noir and the rigid structure of an American slasher movie. Short of some bonkers science, Don't Torture a Duckling hits all its marks: it's got a weird full-sentence title, a mysterious killer on the loose, a civilian outsider pulled into solving the case, and an abundance of gore, music, and flashy camerawork (few directors are as devoted to the split diopter effect). But within the framework of the giallo, it's a thousand other things. Argento and Mario Bava remix Alfred Hitchcock, but Fulci remixes half of the culture and presages the other half.

We get a series of child murders in a rural village in southern Italy. We start with the kids: Bruno, Michele, and Tonino, three boys getting into trouble and having fun. They whisper at mass, sneak cigarettes, and taunt a voyeur for spying on some visiting sex workers. In these early scenes, Don't Torture a Duckling feels like an Italian neorealist film about childhood – a country cousin of Bicycle Thieves or The Florida Project, a couple of decades and an ocean away from the latter. 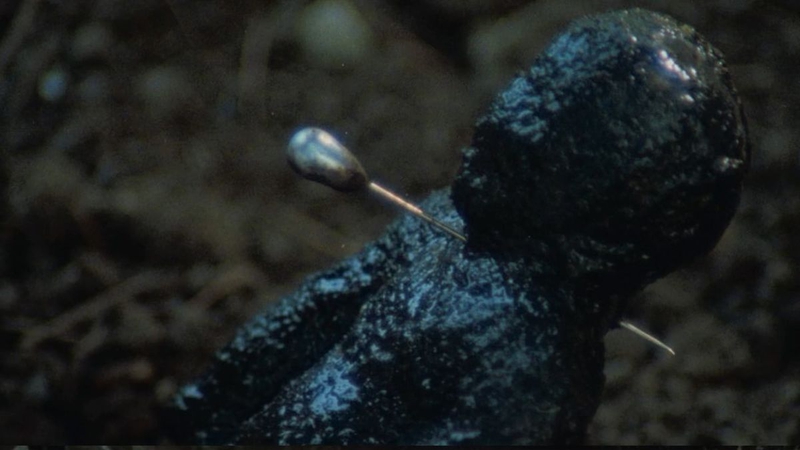 A Romani woman called La Magiara (Florinda Bolkan) lives in the village's hills. She pushes pins into clay dolls of the boys. And then Bruno is killed.

A search team and a media circus descend on the village. This is where our outsider amateur sleuth comes in: Andrea Martelli (Tomas Milian), a journalist from Rome. It's a giallo, so he's a much better detective than the actual detectives. He speaks to the young, handsome priest Don Alberto (Marc Porel), who lets kids play soccer on the church grounds and ensures the newsagents don't stock any magazines he deems inappropriate. Don Alberto suggests the real perpetrator is liberalism, before idly mentioning that strange things have been happening since Patrizia (Barbara Bouchet) showed up.

Martelli spends much of his time with Patrizia, who's laying low in her father's house after a drug scandal in Milan. Patrizia, clad in miniskirts and halter tops, prone to sunbathing nude, is the odd one out in this insular, conservative village. Her interactions with local kids are menacingly creepy: Michele sees her naked, and she asks this little boy if he'd like to go to bed with her; she offers another boy a kiss as payment for changing her tire. She seems like an obvious suspect in the murder, someone whose every move seems sinister and unbalanced.

Don't Torture a Duckling is a character study of small towns, of who and what gets believed, how information is filtered through the hands of a priest deciding what the villagers may read, or through an internal calibration of insider and outsider. Who can you trust enough to meet in the dead of night when your best friend's murderer is out there lurking? That's how Michele dies: going out at the behest of a phone call we only hear his side of, he ends up strangled.

The cops coerce a confession from a mentally disabled man, no matter that his "confession" is full of contradictions. Later, La Magiara also confesses to the murders: it's only during interrogation that it becomes clear she means through magic, saying she has no knowledge or interest in the "physical" aspects of the murders. But Magiara is Romani, a witch woman in the hills, around whom rumors swirl regarding her baby – its father, its death, its disposal. In this village, guilt sticks to her like a bad smell.

Her death scene is devastating: a fantastic, fantastic piece of filmmaking that at once makes you want to look away and transfixes you. A group of men corner Magiara in the graveyard and beat her to death with chains. Fulci's gore effects here are restrained – gruesome without ever going all the way around to hilarious. One of the men blasts the radio in his nearby car, presumably to drown out the screaming. "Crazy" by Wess & The Airedales, an Italian-made slice of American soul, soundtracks the initial blows: it creates a dissonance, the lashes all the more horrifying by the upbeat love song that accompanies it. It's the kind of thing you could imagine Quentin Tarantino doing a few decades later. Then the radio DJ introduces a big, sad Ornella Vanoni ballad, and Magiara crawls, trying to find help, dying on the side of the road. The next day, another boy is found dead.

Don Alberto's mother has a deaf-mute six-year-old daughter. When a deaf-mute six-year-old girl is seen the heads off her dolls, mimicking strangulation – and a Donald Duck toy's head is found near the site of the latest murder, Martelli becomes convinced she witnessed the murders. When Don Alberto's mother takes her daughter and flees to the mountains, Martelli and Patrizia follow. When they find her, she begs them to stop her son.

The reveal of Don Alberto as the killer reframes the whole film as a prescient and incendiary critique of the Catholic Church. He says he did it to save the boys from sin: murdering them before their souls became impure, sexually and otherwise, will guarantee their entry to heaven. The same priest who proudly censors the newsagent's offerings to protect his parishioners from filth is a murderer of children. He moralizes repression and censorship, even with his most heinous crimes. In the decades since the film's release, the scale of the Church's child sex abuse and systematic cover-up was revealed, making the end of Don't Torture a Duckling land a thousand times harder. Don Alberto dies falling off a cliff, hitting every bump on the way down in the film's goriest sequence.

Watching Don't Torture a Duckling, calling Fulci the Godfather of Gore, seems as absurd as saying John Ford made the best movies with horses in them. Fulci's gore is a tool, one he handles as expertly as anyone has. But he wields the others in his belt just as beautifully.