Life (And Beyond) With George A Romero 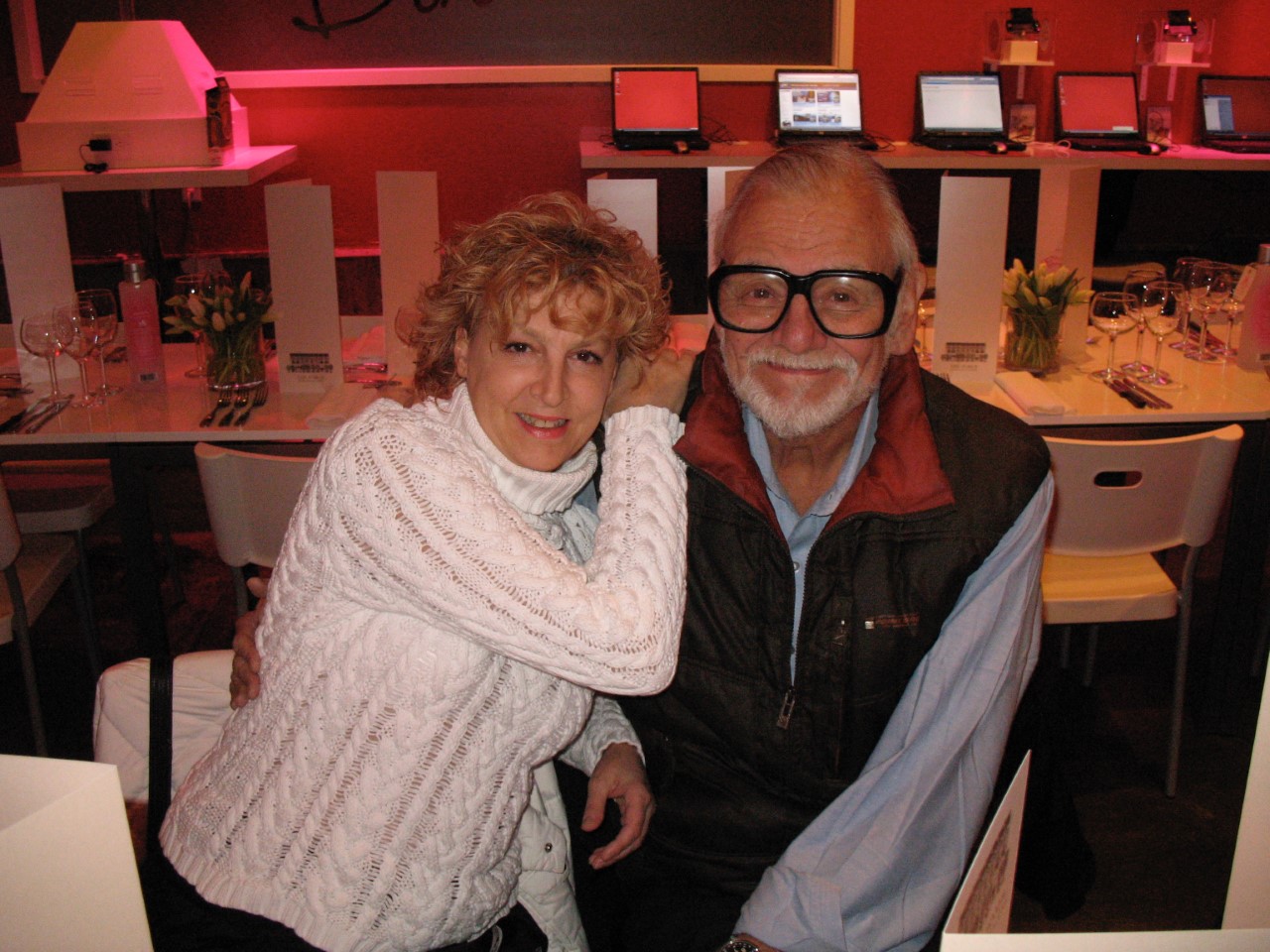 Life (And Beyond) With George A Romero

Ironies. Life is plum full of them.

I met George A. Romero in 2005 whilst he was doing post-production on Land of the Dead. I had never heard of him, nor had I seen any of his films (though I had heard of Night of the Living Dead). We were introduced by a mutual friend. We got to talking and he invited me to see the rough cut of Land. I was pretty nervous about it...for one thing I thought it was going to be trash and I needed to be both polite and honest, which you know is a hard line to straddle. I saw the film, he shut down the TV and asked “Well...? What did you think?” After a short pause I said “it wasn’t that bad!” He roared! Gosh, that laugh!....I miss it so much. He knew of course that I was not the demographic and that if someone like me thought that this film wasn’t so bad, well that just pleased him like punch!

After that screening I got the sense (a woman’s intuition) that he “liked” me. I would have nothing to do with that. First off, I made it a rule never to date customers (I was a bartender at the Marriott where George resided during Land) and secondly, he was a smoker, drinker, married and a lot older....It was a non-starter!

However, with much insistence on his part, I finally relinquished and I went on a pity date...I could tell he was lonely and sad. I had been single for at least ten years and happy as a clambake! I was doing a great deal of travelling and leading a very self-interested life...

I was determined not to call it a “date” but whatever it was, it was terrific!

A second, a third...and a fourth date...I was intrigued,and I just never had met anyone like him. We never talked about his filmmaking career. We spoke about everything else. We had so much in common, his love of Shakespeare, games (together George and I played millions of games...Monopoly, Clue; we contested at Scrabble too many times to count) Christmas, travelling, eating great food, and last but not least the love of cinema.

He asked me to take a chance on him. I did.

We both found that we were the loves of our lives. I loved him. He loved me. I still am very much in love with my husband.

After a few months he said “well.....it might be time for you to see my movies!”

We had a Romero film festival at the house...Wow! I really loved NOTLD, liked Day very much, thought Creepshow was fun and didn’t think much of Dawn. He said, "you know you might be the only person on this planet that doesn’t like that film"...I now know that this is probably true and I haven’t changed my mind. However, all of my opinions have changed since. Seeing other films of the genre and other zombie movies I realized that George’s films were very substantive, very cerebral, ahead of his times, always...that was his genius really! He was humble, gentle and smart smart smart!

In the twelve beautiful years we were together, I realized that the man (who could never find the mayonnaise in the fridge....really!?) was an icon. There were two of him: the Zombie guy and my guy. We managed to keep both happy.

We came back from another fabulous vacation from our beloved Cabos when he was diagnosed with terminal lung cancer (please quit if you are still smoking!). Devastating! He had not smoked for at least seven years, but it got him anyway. During this time, he did not want to talk about the biz....at all! He just wanted to hang, play games and have a few cocktails...we did manage however to talk about his life’s work and his legacy. He said to me, “meh....no one really cares.”

He died July 16th at 2:00. His daughter Tina and I were holding his hands. He did not die alone. We are still devastated at the loss.

I spent three months wandering the apartment in full mourning, and the thought of him saying that “no one really cares” kept haunting me. I decided that something had to be done! It took awhile to take shape, but finally with the help of so many people the George A Romero Foundation (GARF) was born.

GARF has been around for a little over a year. Obviously we are still in our infancy but we are very proud of what we have accomplished thus far. George’s collection of works is finally deposited at The University Library System at The University of Pittsburgh. In Pittsburgh, where it belongs. Part of the problem when George and I were discussing his legacy was that there really wasn’t anywhere to deposit the works. Now there is. The Hillman Library, like GARF, is dedicated to cherishing, curating and securing George A Romero’s legacy. Part of the ongoing symbiotic relationship we have is not only to elevate Romero, but ultimately the genre. It’s time for horror to be respected. Scholars from all over the world will now have access and be able to study all aspects of its impact on society. To study what fascinates us all in the scares and all the things that go bump in the night. The University of Pittsburgh has committed to having a Horror Studies Centre. We at the GARF want it to be endowed as The George A Romero Horror Studies Centre! Doesn’t that sound right? The Hillman envisions it as the Mecca of Horror. A place to not only study Romero but other artists in the genre -- in film, literature, painting. All art forms. It is so exciting!

The GARF is also working towards getting a horror museum in the ‘Burgh. Astonishingly non-existent. Really!? Wouldn’t it be cool to go to a place where like-minded peeps could go and enjoy it all....virtual reality rooms, a cinema, memorabilia, and symposiums. It is important that this happens.

Let’s make all of this happen. I will give it my all to realize this vision and I hope that I am not alone in my quest. Visit the GARF website and become part of our movement.  See what we are doing and where we are going.

Suzanne Desrocher-Romero is the Founder and President of the George A Romero Foundation, dedicated to honoring the life work and cultural influence of George A. Romero, and supporting a new generation of filmmakers and artists inspired by his legacy. For more information and to learn how you can support their mission, visit their website.