Keeping It Real: The Sets and FX of ‘Night Crawl’ 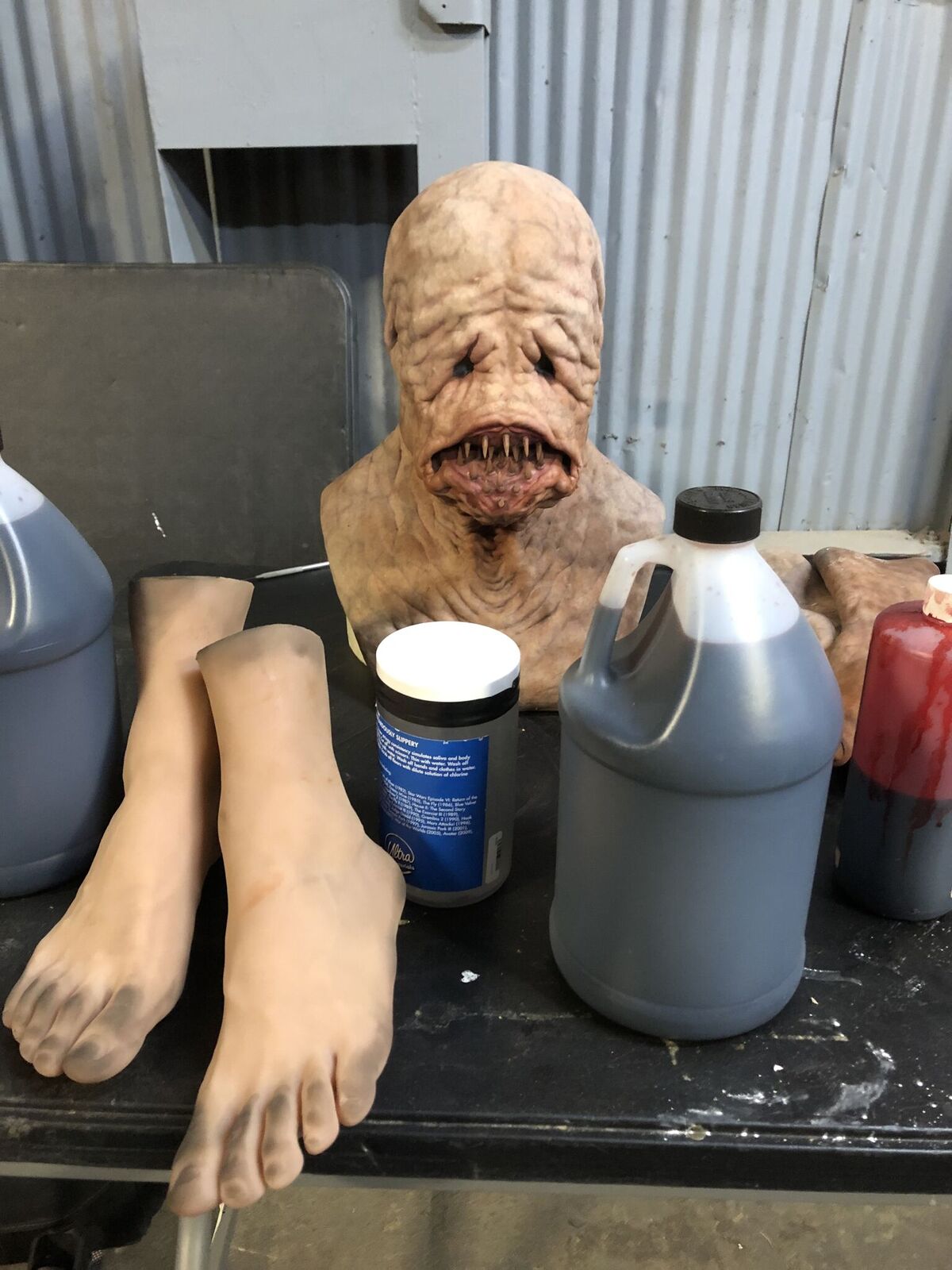 These feet are from the author's personal collection. (Looks around) Should we be calling for help? (Photo by Kyle Vannoy)

Keeping It Real: The Sets and FX of ‘Night Crawl’

In this second in a series of articles, filmmaker Gregory Shultz writes about his experience making Night Crawl, a genre short which will play at New York Horror on Dec. 7.

rt Director Marty McCue and I started Night Crawl by storyboarding. We had two days of shooting set in April for 38 set-ups. I rented a warehouse for a week - Four-day build, two-day shoot, 1-day strike. The crew was mostly art-department friends who were down to clown. Brook Linder, my longtime friend, came on to produce the beast, and Frank Mobilio shot the hell out of it. It was kind of a party.

Production Designer Carlos Laszlo, Marty, and I started by building the prison block miniature when we had free access to a shop. Eventually, we got an assembly line making 1/5 scale bars in my apartment. Our construction coordinator, Arin Ajamian, jumped in and helped pull it all together.

For our monster, we enlisted the help of make-up FX shop CFX. We wanted a creature that was virtually blind because she’s a CHUD of some sort. They fabricated the head and hands and shipped them to us. Wendy Gonzalez did the creature’s additional body makeup and FX. Melisa Garcia, our costumer, dressed and aged our two leads as well as building parts of the miniature. Everyone had to do multiple jobs. It was a real family movie. We were all professionals who work in the film industry, but this was all for fun and fun for all!

Leone Reeves played the creature. Being a monster is never an easy job. It’s sweaty, you can’t hear, and no one can hear you. She’s a performance artist and a real starship trooper. I love a good (or bad) practical effects creature. If I sense there’s digital animation, you have lost me. For better or worse, I like to keep it real. That goes for movies in general. For a second in time, from a certain vantage point, you can make magic happen. That’s the entire draw for me.

I wanted the sets to be as big as the space could handle, and lumber is not cheap. We were lucky to find EcoSet; they specialize in recycling set pieces and lumber.  Most of our cave structure was a piece from the Oval Office of Veep.  The most expensive part was the foam for the cave walls. That’s hard to fake cheaply. We made the entire floor of the cave water for this reason. Our Decorator Kyle Vannoy and Leadman John Horlick made it all possible.

There are a lot of tiny practical effects I love that probably go unnoticed. Like we had these little robotic cockroaches, and all the rain was real. My favorite effect was a skyline that you couldn’t even see.

Sound is as much of a special effect as anything and we had basically none - real Italian-style. When doing action, sound is usually garbage. When you have rain going, you can’t hear anything but the smack of water. Felipe Barros did a tremendous job creating all the sound effects and building a creepy environment. He created every bed spring, water drop, or bug scuttle.

Accompanying the sound design was Miles Carrington’s score. He has never seen a horror movie. He’s too scared. The soundtrack is very industrial and featured a few homemade instruments that offered unique sounds. I was lucky to have the audio wizardry of Miles.

After it was all cut and synced, it was time for the credits. The art of the title is an important part of movies to me. The making of the ‘80’s HBO logo is a masterpiece.  We hand-painted all our credits and built our company logo practically. We put it on turntables and everything. A tremendous effort for the credits, but it is very important to me that you see the touch of a human on every piece. No lines are perfect.

To wrap it up, I would like to talk about the wrap. It turned into a 38-hour workday. I was dead and almost lost my mind power spraying the floor of the warehouse. Not much was saved. We got rid of everything we built. Some people think that’s crazy, but the real product is the movie. I hope you enjoy it or else it’s just 6,000 pounds of trash.