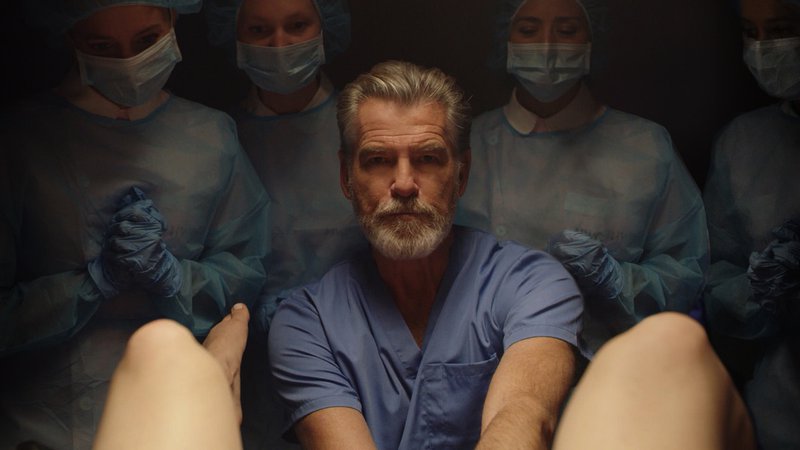 Now streaming exclusively on Hulu, False Positive plumbs deep fears about pregnancy and birth with both a keen sense of maternal concerns and a generous helping of dark humor. Ilana Glazer stars as Lucy, a New Yorker who has been unsuccessfully trying to get pregnant with her husband Adrian (Justin Theroux). They wind up at the fertility clinic of the esteemed Dr. John Hindle (Pierce Brosnan), who was once Adrian’s teacher, and soon Lucy is with child. But she comes to develop suspicions about her condition and the man who got her that way, leading to sinister revelations about what really goes on at the Hindle Women’s Center.

Produced by A24, the genre specialist behind Ari Aster’s Hereditary and Midsommar among others, False Positive was directed by John Lee (who first discussed the movie with FANGORIA here), a veteran of numerous outlandish and satirical series such as Wonder Showzen, The Heart, She Holler and Broad City, the latter also starring Glazer. The two collaborated on the False Positive script, from a story Lee wrote with Alissa Nutting, and for the director, the transition from episodic to a 92-minute movie wasn’t a big deal. “I think the industry still believes it is, though,” says Lee, who previously tackled the feature form with Pee-wee’s Big Holiday. “Television was wise enough, about 15 years ago, to say, ‘Hey, filmmakers, come on over,’ but I think it took a while for movies to realize that there are many people who want to tell stories in different ways. I see it happening now that more people are crossing over back and forth, as television has become bigger and movies have stopped making things like romantic comedies. Those lines are becoming a little more blurred. It might also have to do with the fact that there are more young people who are open to being both filmmakers and musicians or artists. They’re open to a lot of creativity, and not stuck in a genre or one form of expression.”

Once Lee and Glazer had their script completed, they knew exactly where they wanted to take it. “A24 were the only people we took this to!” the director says. “I didn’t think there was anyone else who would make and support this movie. So Ilana and I just went in and met Noah [Sacco] and Alli [Reich] and gave them the script, and they got back to us quickly and said, ‘Let’s make this movie. We’ll give you this amount of money,’ and we said, ‘Yay! [Laughs.] We’ll take that amount of money.’ ”

Although False Positive cinematographer Pawel Pogorzelski had shot both of the A24/Aster films, however, Lee notes that he wasn’t a similar first choice. “I interviewed a lot of different DPs, both friends and not friends, and Pawel just got the material very well,” the director recalls. “He really understood the movie, and how strange I wanted it to look. The kind of collaboration I like is with people who think beyond me, which makes me think beyond them, where we both go too far down the path and then go back and say, ‘OK, out of the 10 ideas we’ve just said, let’s just use idea seven and part of four for this scene.’ We meshed like that; we were always in what I like to call a creative competition, where one person has an idea, and you try to outdo it, and then finally someone has the best idea, and you’re like, who cares who came up with it, but eventually, one of you does.”

Another key collaborator was Brosnan, cast against type as a doctor who initially seems warm and comforting, while hiding a more devious agenda. “We wanted a doctor you could fall in love with; it was important that you like Dr. Hindle, that you don’t hate him from the get-go,” Lee says. “It makes things more complicated that he’s a person who, when you see his face and hear his voice, you just trust. Pierce connected to the odd tone of the movie, and understood the creepy humor of it.”

“I understood why I was being employed, and I got the joke,” Brosnan laughs. “The film has a nod and a wink to the audience; it lets them in on it, and John created a film that’s elegant, disturbing, elliptical and jagged. There are a few twists and turns in there, and one scene [of a type] I’ve never really done before. It’s a scene that I think will give people a kick in the pants, and it’s always good to have an unexpected surprise in there. That’s the joy of being an actor; you want to be able to move around the stage as much as possible, and try your hand at different levels of performance. At this point in my career, I’m in a rather joyful time, playing all these roles without the restraints. The world of independent filmmaking is one that I always enjoy the freedom of.”

Brosnan has played men engaged with weird science before, but notes that False Positive is more rooted in reality. “The Lawnmower Man actually is a very fine little film, and I also played a scientist in Mars Attacks!, but Dr. Hindle is a fertility doctor, and I’d never played one of those before. It’s a thorny topic, and the movie is really about true-life horror: malignant narcissists who abuse their power and create devastating havoc in the lives of women who are trying to bear a child. That was quite a revelation for me; it’s the kind of story that you half-hear about on the news, but when I began to investigate and look at what these men have done, it was very shocking and disturbing. There are, of course, many great doctors out there who bring comfort and solace, and do fine work in enabling young people to create a family. So I thought it was a fascinating topic, and A24 do such good work in the line of these kinds of horror movies.”

False Positive stands in the long tradition of fright fare dealing with birth anxieties, dating back to Rosemary’s Baby. Though the emphasis in the new film is different, one thing it has in common with the Mia Farrow classic is the way it casts the Big Apple in an ominous light. “The entire film was shot in New York City, and that was important to Ilana and I,” Lee confirms. “We wanted to capture this thing that was going on pre-COVID, which was a lot of extreme privilege coming into New York City, but under the guise of being aware and liberal and progressive, you know? It felt a little false to me, and a little insincere, and we wanted to point that out. The Grace character [Zainab Jah], the midwife, encapsulates a lot of that for us – our opinion of what was going on with modern New York. It’s changed somewhat because of COVID, but that was very much on our minds.”