Joe Bob Goes To The Drive-In: We All Love Tom, Master Of Disguise 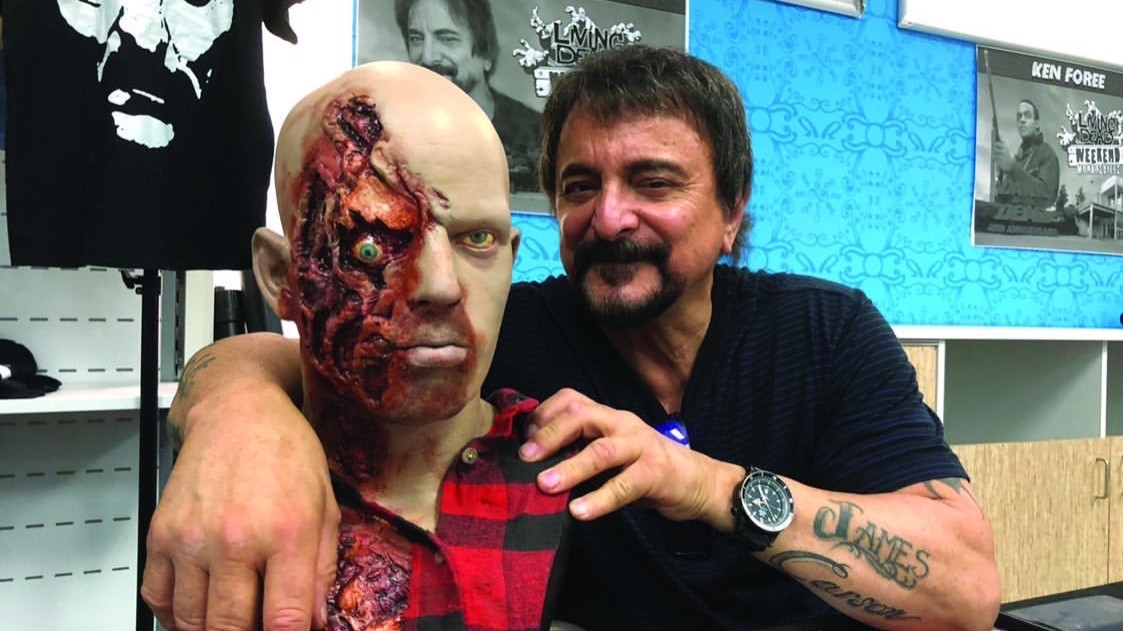 Joe Bob Goes To The Drive-In: We All Love Tom, Master Of Disguise

We All Love Tom, Master of Disguise

NEW YORK—Well, it’s my first day at FANGORIA and boy does it look different. I kind of miss the days when it was Tony Timpone and Mike Gingold hunkered down in a musty office somewhere in the Gramercy Park area. Or was it Chelsea? Or was it Park Avenue South? All I remember is that you presented yourself at one of those nondescript office buildings that look like they should be full of cheap private eyes, you ascended in one of those gilt-plated elevators that still had the handles on it from the days when it was operated by a human being, and when you emerged there were grey hallways and doors with transoms straight out of King Vidor’s The Crowd. If you turned left you were in the offices of STARLOG. To the right was FANGORIA, which consisted of Tony, Mike and some battered file cabinets. I once told Matty Simmons, the publisher of National Lampoon, that he had the cheapest, crummiest offices in New York City, but Matty had a couch. Tony and Mike had apparently hauled chairs in from the Salvation Army Thrift Store.

I’m not sure exactly what I expected FANGORIA to look like, but it was probably something like Tom Savini’s house. I know this now because I’ve been watching Smoke and Mirrors: The Story of Tom Savini, the new documentary by Jason Baker, Tom’s collaborator in the wrestling world, and it features quite a few glimpses of his various domains, including one room where he keeps the several hundred masks he’s collected over the years. The movie is a valentine to Savini, pretty much a 90-minute monologue by the special effects master peppered with accolades and tributes from his colleagues and fans, but it’s a great jumping-off place to talk about horror then and now because Tom Savini’s career and FANGORIA’s existence both arch across the same five decades. Tom has settled into supervising and consulting ever since he wore out his sculpting hands. FANGORIA has entered a new era in which editor Phil Nobile Jr. is shaping the magazine into an all-encompassing bible of the genre world. Neither of them need an exploding head anymore to get noticed.

And yet that’s where it starts, for the magazine and the man. It starts with those gory, gruesome, bright-colored horror tricks that originated in the Sixties, coursed through the exploitation world in the Seventies, and entered the mainstream in the Eighties. The gore images made FANGORIA the best-selling horror magazine in America, and the man who made the gore images launched a career that is unequalled among his peers. (Rob Bottin and Dick Smith did equally impressive work, often for big-budget Hollywood releases, but they never had the rock-star credentials of Savini. No other special effects artist was a regular on Letterman.)

So my question for today is: how does a specialty crew member become a bigger star than most of the directors he worked for? And how does a magazine whose cover always focused on entrails, brain damage and monster goo grow into the most respected genre publication of its era? (I’m not dissing Famous Monsters of Filmland, but publisher Forry Ackerman was relentlessly focused on the past, whereas FANGORIA was always sleuthing around for the yet-to-be-revealed images from future releases.)

I would be willing to wager that fewer than 1 percent of the people reading this article can name a horror-film production designer, although many will claim to because it’s an easy Google. How many can even name the horror production designers who have won Oscars? (Hint to ease your Google search: there are five, the earliest in 1943, the most recent in 2017.) But there is no fandom devoted to Alexander Golitzen, the Russian who art-directed over 300 films at Universal, including Phantom of the Opera, The Incredible Shrinking Man, The Thing That Couldn’t Die, The Monolith Monsters, I Saw What You Did for William Castle, The Leech Woman, the vampire western Curse of the Undead, several Jack Arnold films including Monster on the Campus, and—we’re getting to my point here—the 1957 film that inspired Tom Savini to become an artist himself, the Lon Chaney biography Man of a Thousand Faces.‍

“Everything I’ve done was because of one movie,” says Savini in Smoke and Mirrors—but he doesn’t mention Golitzen. Nobody mentions Golitzen. Savini saw the film at the Plaza Theatre in downtown Pittsburgh when tickets for children were 25 cents. He had been a fan of monsters through television reruns, but “I thought the monsters were real—this movie showed me that somebody creates the monsters.” It was the catalyst for his whole career. From that day forward he read everything he could find about makeup, magic, sculpting and effects.

Jason Baker, the director of Smoke and Mirrors, misses a lot of opportunities in exploring Savini’s life and art. Early in the film Savini talks about being self-conscious about his large Italian nose—right at the point where he’s about to embark on a career creating faces, many of them deformed or disfigured. Unexplored.

At another point Savini says he only did the special effects work as a way to get hired as an actor on the films. He did end up getting cast in dozens of roles, usually as tough guys because Savini is one of those rare behind-the-scenes nerds who is ripped and athletic, but he never got that one breakthrough part. As a result he kept returning to the little Cape Fear Regional Theatre in North Carolina so he could satisfy his actor’s instincts. (He first started working there when he was stationed at Fort Bragg.) It’s like the guy who wanted to be a baseball player but ended up being nationally famous as the creator of the Jumbotron, the uniforms, the balls and the bats—he never hit that home run. Again, unexplored.

Most interesting of all, Savini talks about “living in denial” after his brother Tony dies at the age of 28 from a freak gunshot wound. Savini says denial was, in fact, “my M.O.,” to the point where, when his father dies, Savini sits with the body for three hours so that he can watch him become grey, leaving with the knowledge that there is nothing there. It’s not what people normally say when they sit with the body of a loved one. Usually, if they are able to articulate their feelings, they say they are reaching for some bond beyond death. Savini seems to be saying the opposite—that he wanted to be sure everything was over, lifeless. It would have been intriguing to have him go deeper there, since he has made a lifetime study of dead bodies.

And then, of course, there’s his Vietnam experience. He talks about it in the documentary, telling a story about being sent for one day to the front lines and opening fire prematurely because his tripwire was triggered by a duck. But normally he was assigned to a non-combat unit. “The guys on the front lines would come back to our base and their eyes were soulless,” he says. “You’re forced to turn off your emotions to psychologically save yourself.” Once again, denial—he even goes so far as to say that, when he saw gore and head wounds in Vietnam, he regarded them as special effects. Once again, left at that.

Don’t get me wrong. Tom is an accomplished conversationalist and he tells great stories about how he got his first job, his relationship with George Romero, his friendship with Greg Nicotero and others in the industry, growing up poor, his wives and children, the reasons he remained in Pittsburgh instead of following lucrative offers to work in California, but I would have liked to hear more about his self-conscious decision to remain childlike while adult crises were happening all around him. It’s a decision that many actors and creative people make—it’s almost a requirement of the industry—but here’s a guy who maintained it through the painful deaths of loved ones, actual war, more than one divorce, and—this was a surprise to me—a period when he owed so much alimony and child support that he was literally supporting himself with convention appearances. It’s a tribute to his inner strength that he was able to remain the likeable I’ll-do-anything let’s-make-a-movie guy that we all know. I would have just liked to have known a little bit more about the soul-wrenching dilemmas that got him there. It would explain the creative sources of all those outstanding FANGORIA covers.

‍
Since 1982, Joe Bob Briggs has been the drive-in movie critic of Grapevine, Texas.