Joe Bob Goes To The Drive-In: Let's Get Nerdy About 'Black Christmas' 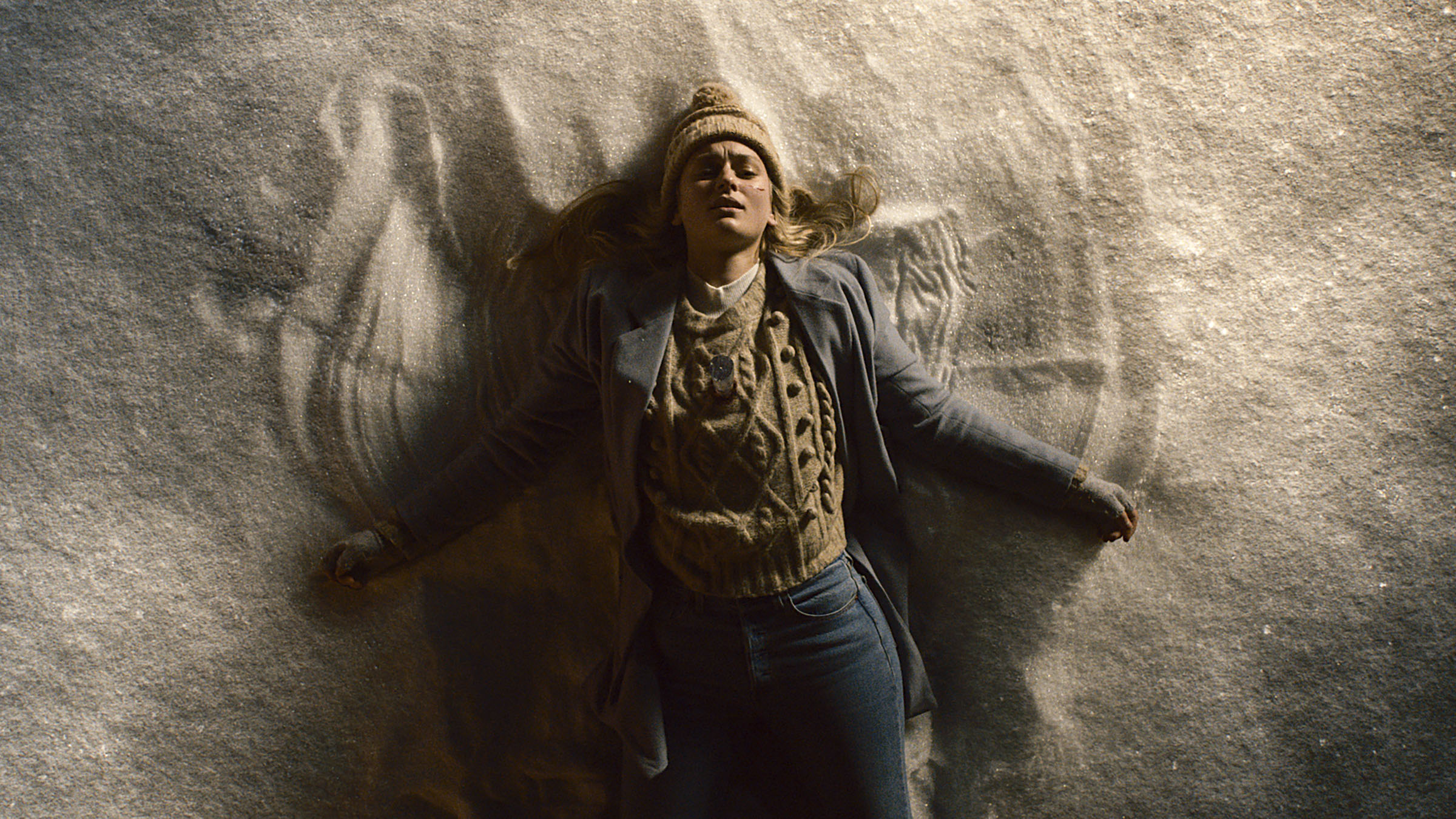 Joe Bob Goes To The Drive-In: Let's Get Nerdy About 'Black Christmas'

At this point, we’re not supposed to talk about Black Christmas anymore.

One view, stated in these pages last week, is that any white male who dislikes it should probably examine his prejudice and his privilege.

Another view, stated at various places on the web, is that, if you don’t like, it, “you’re not the target audience—the movie wasn’t made for you!” The movie was made for pre-adolescent girls.

If this is the case, a) I wish they would put the target demographic in the trailer so we would know in advance, b) who makes horror movies exclusively for pre-adolescent girls?, c) they probably shouldn’t release it on 2800 screens if they’re going for a limited audience—the traditional thing to do is put it in IFC Cinema and then platform it out, and d) don’t call it Black Christmas.‍

Shortly after it came out, when people were trashing it and defending it and talking about everything except the movie itself, I gingerly suggested online that perhaps, if we got rid of the Black Christmas name, the movie might not get as much flack. I was advocating the Halloween 3 Test. It is widely assumed today that, if the producers of the Halloween franchise had simply released Halloween 3 as Season of the Witch, it would have succeeded at the box office instead of being reviled as a betrayal of Halloween fans. Its fundamental sin—no Michael Myers, no Dr. Loomis—is similar to the fundamental sin of the 2019 Black Christmas, namely “Where’s Billy?” (I thought maybe Cary Elwes was gonna turn out to be Billy, but no such luck.)

Anyway, I was promptly slapped down for my suggestion. A colleague of mine shot back, “I don’t think the filmmakers should have to change the title of their movie so people won’t attack them. The problem isn’t them.”

The problem, I guess, is the audience.

We have people saying that the audience is wrong. Not that the marketing campaign was wrong. Or the casting was wrong. Or the premise is wrong. One thing I would like to ask the producers is why they even bothered to spend whatever amount of money it cost them to access the “Black Christmas” name. The only thing this movie has in common with the original is the fact that it’s set in some kind of privileged elite school that seems to be Ivy League and distances the average filmgoer from the entire cast. It was actually filmed at a university in New Zealand, but if I had to guess what American colleges it was modeled on, my choices would be Wellesley, Mount Holyoke or Vassar, were it not for the fact that it’s full of so many evil men. If you want us to identify with these people, shouldn’t the vibe be a lot more University of Alabama and a lot less Yale?

I can’t figure out why I don’t love it, because the idea of it, on paper, is right up my alley. It’s about a secret fraternity with demonic powers that has been meeting for 200 years to “keep women in their place.” Their weapon of choice is the bow and arrow (because the patriarchy runs all the way back to the original Americans?). They wear wooden theatrical masks and hooded robes as they venture out in packs to kill wayward females. The source of their powers is a mysterious black goo that seeps out of the bust of the college’s founder, Calvin Hawthorne (a double reference to fundamentalism?—John Calvin and Reverend Dimmesdale?). But now they’re faced with an existential dilemma. Their very reason for being is lampooned in amateur theatricals about date rape. Their student leader is forced to leave school over a rape allegation. Their faculty leader is the subject of a campus-wide petition to fire him for misogynistic beliefs.

There are all kinds of horror traditions to draw from here. Rape/revenge—I Spit On Your Grave is forty years old but its themes have been repurposed dozens of times in many different stories. The sorority-house subgenre—The House on Sorority Row, Sorority House Massacre, The Initiation—has a film language of its own that could be used and/or subverted. Most of this movie takes place in two locations—the MKE house (women) and the DKO house (men)—and our heroine, played by Imogen Poots, is an MKE starting a relationship with a DKO, played by Caleb Eberhardt, so you have a Montague/Capulet thing going on that could be developed into dramatic material.

But none of this is used.

They never show the rape—not even in the suppressed imagination of the traumatized Riley. (Poots’ character and all the other sorority girls are given gender-neutral names—Riley, Kris, Marty, Jesse. The only one with a feminine name, Helena, turns out to be a traitor.)

The Romeo & Juliet subplot is so underdeveloped that we’re never sure whether the two people even like each other.

A key plot point—Riley seeing names on a list accidentally dropped by the misogynist professor—goes by so quickly that we don’t know what it means unless we’ve memorized all the character names before coming to the theater.

Much of the plot turns on threatening cell-phone messages, the modern-day equivalent of the unexpected phone call from a mysterious informant.

The kills are all pulled punches. In one case—the character of Jesse being murdered in the attic while she’s testing Christmas lights—we don’t see her killed, we don’t see who kills her, and we don’t see the aftermath of her death. The filmmakers chose to shoot everything except the actual event.

Finally, the killer is a group. A group killer is no killer. There’s no antagonist. The killer is an entire fraternity—they’re all killers. Yes, you could make that scary if you had the CGI budget of, say, the 1999 version of The Mummy, but as it stands now, you have to resolve the premise by having the sorority suddenly turn vigilante and develop martial arts skills, archery skills, and pyrotechnic skills so that the frat house can be burned to a crisp in a melodramatic ending.

The result is the equivalent in horror of Jaws 4, the one where the shark follows Michael Caine’s flight to the Bahamas so he can try to eat Lorraine Gary again. The movie has a shark in it, and that’s about its only relation to Jaws, other shark movies, and creature movies in general.

Horror audiences are very forgiving. They will champion movies that fail at the box office long after they’ve been abandoned by the mainstream. The one thing they won’t forgive is a filmmaker who seems to be condescending to the genre, and that’s what this feels like. Again, I don’t think it’s true, because we know who made it. But whatever shortcuts they took on the script led to a feeling that they were a little too in love with the Ivy League snappy-patter scenes and extremely contemptuous of the kill shots. Did they even spend ten bucks on special effects makeup?

In other words, nobody would care about the speeches condemning the patriarchy if they were backed up by suspense, shock, tension, and, uh, horror. It’s possible for mumblecore to cross over into mumblegore—I think House of the Devil is a superb example—but only if you get out of your head and start digging down into the sources of fear. These frat boys aren’t scary enough. They’re not evil enough. They’re like cosplayers who got a little out of hand. And that black goo they’re drinking—and smearing on one another’s foreheads—is a perfect alibi. Once they’re all gooed up, they’re like machines, you can’t blame them anymore. The movie ultimately lets the killers off the hook. So, yeah, maybe that’s one more thing it has in common with the original Black Christmas. They never found Billy. (Yeah, I know, Billy showed up in the 2006 remake. This is the strangest franchise timeline ever devised.) But we still haven’t found the real Billy. He’s still out there, waiting for someone who loves horror to dig him out of his lair.

Anyway, let’s take a look at those drive-in totals. We have: Sixteen dead bodies. Icicle to the chest. Neck-snapping. Rape-culture choreography. Barbecued Cary Elwes. Gratuitous Camille Paglia quote. Archery Fu. Woman-hating Fu. Spooky direct-message Fu. Car-key Fu. Goo Fu. Drive-In Academy Award nominations for Imogen Poots, as Riley, for sneaking into the frat house on a goo-finding mission; Caleb Eberhardt as Landon, the shy awkward would-be boyfriend who Rambos up in the final scene; Madeleine Adams as Helena, the sometimes drunk sister who thinks women should take their rightful place behind men; and Aleyse Shannon, as the crusading sister who annoys everyone with her petitions.