Judgment Day is upon us. 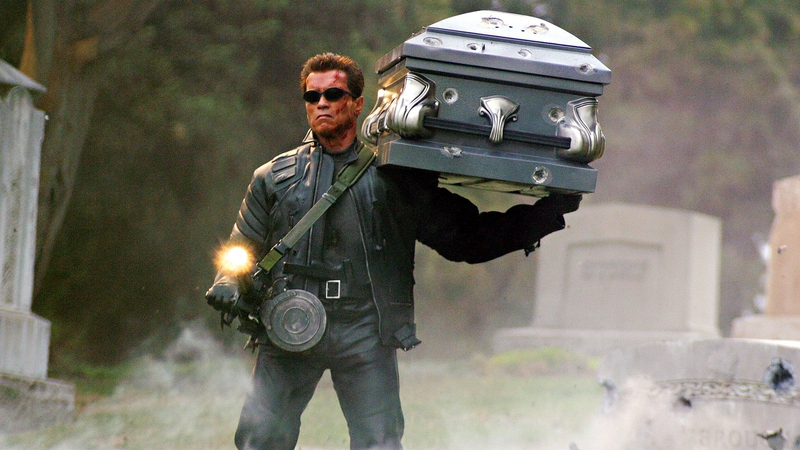 This year, Terminator 2: Judgment Day turned 31 years old. There is no shortage of brilliant writing espousing the gospel of T2. James Cameron's bigger and bolder sequel is a stone-cold classic whose DNA spreads far and wide to all corners of genre film. But this summer almost marked another anniversary; Terminator 3: Rise of the Machines is now 19 years old. For a decade, mum's been the word on the third installment of this cyborg threequel. It's not as revered as Cameron's first two films, not as infamous as the Christian Bale-starring Terminator Salvation or bizarre as Terminator Genisys, and not nearly as recent as Terminator: Dark Fate. Here's the thing, though: Terminator 3 kind of rocks.

You wouldn't know it from Terminator 3's troubled production history, of course. After the release of Terminator 2, James Cameron had no intentions of making a third film. In his eyes, the story was well and truly resolved. Maybe he was right, but money talks, and T2 made a lot of it. For a few years, Cameron and Schwarzenegger were developing their own version of a follow-up, with Schwarzenegger especially keen to return to the role. Following the owner of the Terminator rights, Carolco, going bankrupt, the ownership changed hands about as much as the writers and the project's general direction. When Terminator 3: Rise of the Machines went before cameras in 2002, it was with director Jonathan Mostow and writers John Brancato and Michael Ferris, Schwarzenegger being the only returning cast member. 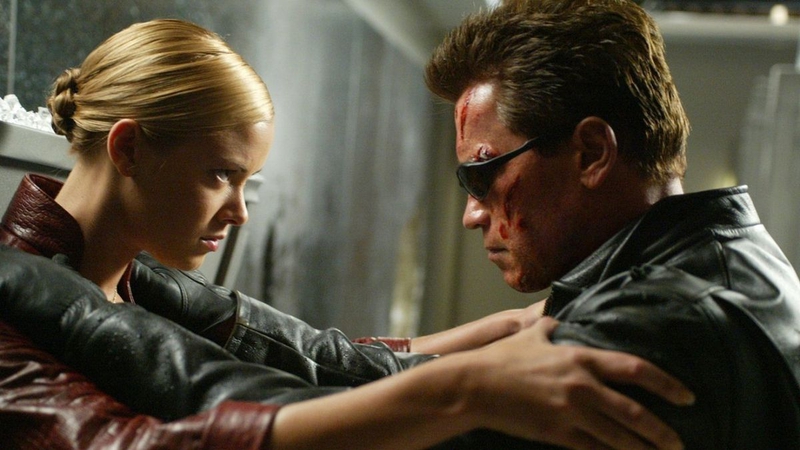 The final result is surprisingly cohesive because Terminator 3: Rise of the Machines knows exactly what it is. If The Terminator is a sci-fi/horror and T2: Judgment Day is a sci-fi/action, then Terminator 3 marks another shift into heavy action with a bit of horror on the side. By this point, what was fresh in Terminator 2 was now being relentlessly reused for other films. Rather than try and reinvent the wheel, Rise of the Machines returns to the old well for a stripped-down, high-octane adventure that embraces convention.

John Connor, played serviceably by Nick Stahl, lives the life of a wanderer, aimless after his mother's death and haunted by the fate that the two apparently averted. Turns out Judgment Day is still on the horizon. A prototype liquid metal Terminator known as T-X (Kristianna, or the "Terminatrix," is on the hunt for John and a veterinarian named Kate Brewster (Claire Danes), who is to be his wife in the future. Of course, Arnold Schwarzenegger returns as a new T-800 sent back to the past to get the two to a secure location when Judgment happens, but John and Kate have other plans: stopping the launch of supercomputer Skynet, which Kate's father is now developing at Cyber Research Systems (CRS). 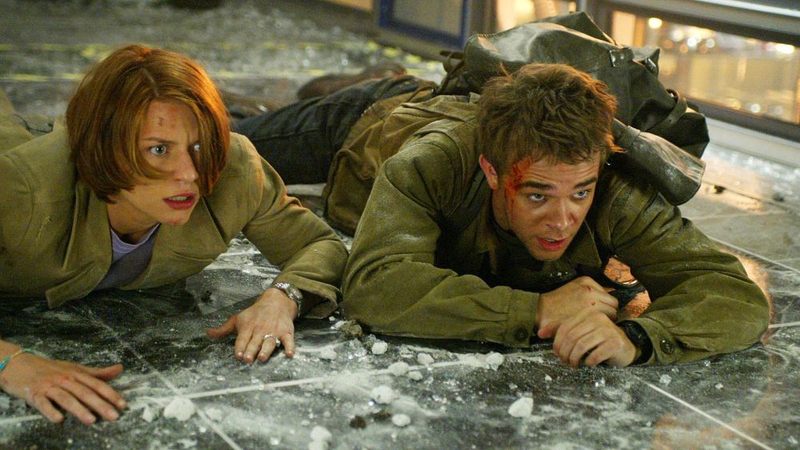 Using that bare-bones concept, Terminator 3 starts and never stops. Jonathan Mostow essentially crafts a big chase movie. Think Mad Max: Fury Road, where two intelligent machines beat the snot out of each other. That's a mighty big sell that Mostow absolutely delivers on. The man knows how to stage an action scene. Case in point: a pursuit through a residential area features Arnie climbing back and forth between vehicles being tailed by the T-X in a massive truck, eventually hanging off the truck's attached arm and smashing through everything in sight as vehicles around them turn into mangled heaps of scraps and broken glass. Oh yeah, and did I mention that John and Kate's lives hang in the balance the entire time?

The sequence looks and feels expensive, which it was. This film had a reported budget of over $187 million put to great use with a seamless mixture of practical effects and CGI. Besides the aforementioned scene, which ranks as the best action beat in all of the Terminator films, the film is chock-full of the highest quality action you could find in 2003. Seeing such physical performers as Loken and Schwarzenegger just wailing on each other on a military base while Skynet is about to launch is peak entertainment. Having more brawn than brains hardly matters when you're hooked up to an adrenaline drip this strong.

Other than being beyond proficient in the action department, Terminator 3: Rise of the Machines knows exactly what it is. Many complaints have been made about the humor in the film, and I'll admit flourishes like the T-800 putting on a pair of sparkly sunglasses from a bar's "Ladies Night" that he just interrupted felt a little rough on first viewing. But this isn't the heady world Cameron created, this is a campy romp. There's no way to recapture the touching "robot learns how to feel" arc from the prior film, so why not just play up T-800's comedy factor? He's a focused soldier with no time for BS, often quite literally driving the plot forward as John and Kate struggle to stay one step ahead. Schwarzenegger is clearly having a blast, as should we. Who can't appreciate a line like "Levity is good, helps relieve tension," blurted out by Arnie when the duo is trying to have a heart-to-heart? 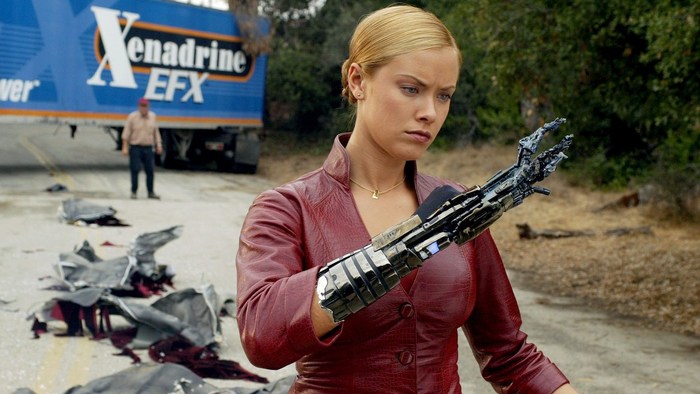 Another strong example of the tone working in the film's favor is The Terminatrix. Naturally, you can never top the T-1000, so why not go a different direction entirely? The name "Terminatrix" and her tight red leather costume are decidedly tongue-in-cheek, and Kristanna Loken's over-the-top performance of femininity when she tries to blend in is delightful. Moreover, her actions and presence remind me of a campy slasher villain more than anything. One gets the feeling we're not supposed to gasp but giggle in trashy glee when she eviscerates her enemies. She looks like something out of a gory video game of the era. It's messy and very dated, though that "of the era" aesthetic is part of the charm.

Far and away, my favorite thing that Terminator 3: Rise of the Machines does is sticking the landing with a bleak as hell ending. Unable to avert Skynet, the T-800 locks John and Kate in a secure bunker as Judgment Day arrives. And right before our very eyes, the world as we know it ends; the only noise is the slight murmurs of radio communications between survivors. It's natural to feel cheated by this ending, as Terminator 2 was about how the future is not yet written. However, I don't think Terminator 3 overrides this. In fact, writers John Brancato and Michael Ferris elaborate on this in a sense. The machines and the humans are locked in a war across time, and the only way to win is to keep trying. More machines can always be sent back, maybe John can prevent Skynet from being launched with the information he currently has. Or maybe he can turn the tide quicker in the future. Time is but a vessel for this war. The only thing that matters is that people keep fighting.

Terminator 3: Rise of the Machines is not as great a film as The Terminator or Terminator 2: Judgment Day, nor does it have to be. With electric action, a knowing tone, and a stellar ending, it more than holds its own as a worthy closer to the trilogy. Above all, Terminator 3 is a marker of what could've been if the franchise was allowed to continue to evolve off the beaten path. After the different, though nowhere near as quality, Terminator Salvation and two films that ignored T3 entirely (Genisys and Dark Fate), the franchise is now in shambles. The path was right there all along — take the property's essential elements and confidently put your own spin on it. Terminator 3: Rise of the Machines has been ignored for years. Don't let its 20th anniversary slip by without recognition.