Interview: Vernon Chatman Talks About Season 2 of ‘The Shivering Truth’ 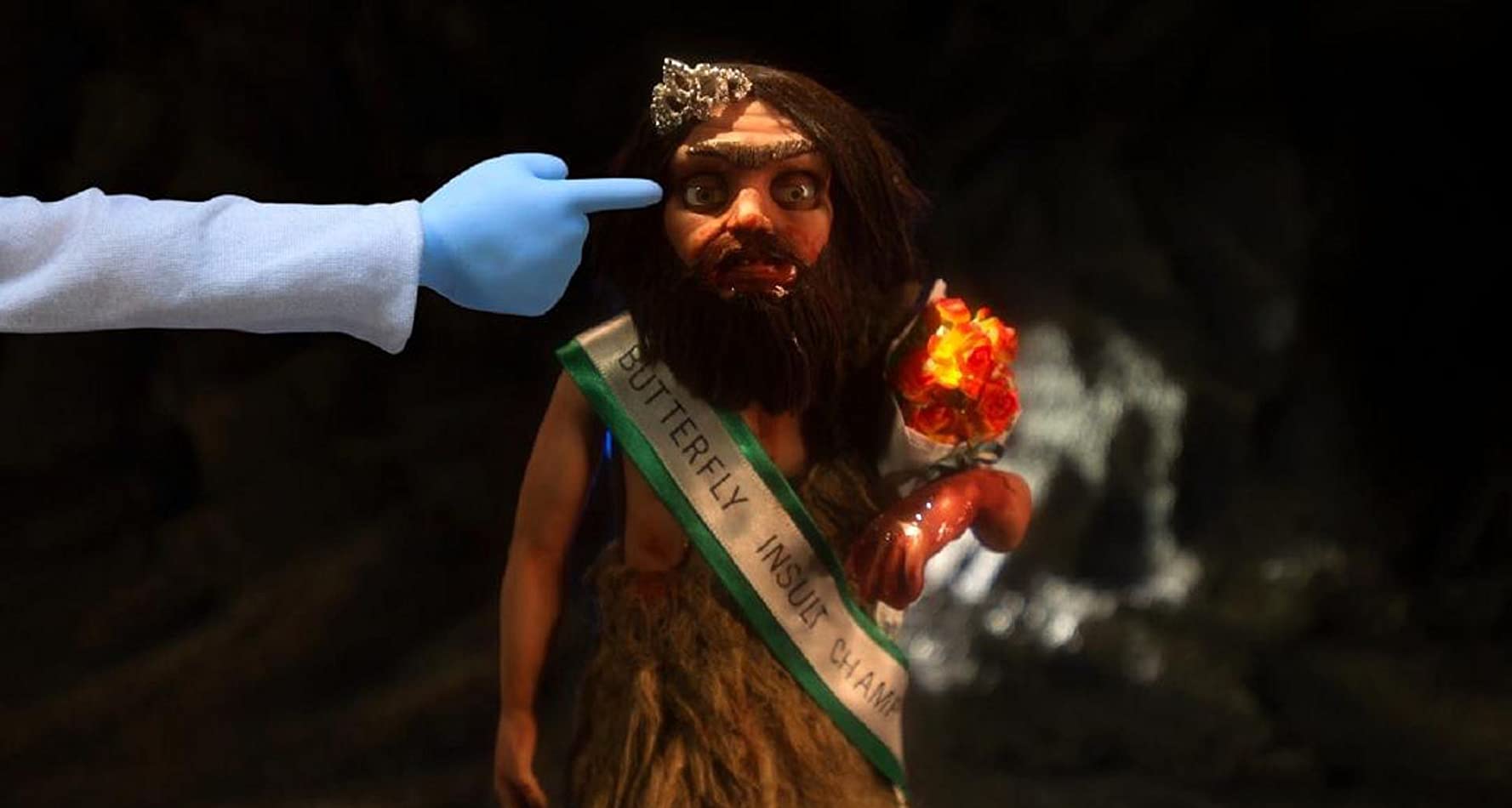 Interview: Vernon Chatman Talks About Season 2 of ‘The Shivering Truth’

hile it may be a strange proclamation for the uninitiated, those in the know already understand that Adult Swim can be one of TV’s most reliable destinations for a quick horror fix. From the often fear-inducing hard left turns of Tim and Eric’s oeuvre to the unannounced mind-fuckery of Too Many Cooks, the network has delighted in making people laugh and urinate themselves at three in the morning in equal measure. While the network’s forays into horror usually come in unexpected, measured doses, The Shivering Truth - whose second season resumes May 10 following a March 31 special premier - dives head-first into horror-comedy territory. A surrealist, stream-of-consciousness sketch show, the program is a mind-warping trip into an uncanny valley, featuring stop-motion puppets engaging in such unsettling acts as cannibalism, disembowelment and chicken blood infusions. Delivered with equal amounts absurdist humor and stomach-churning grotesquery, it’s the horror comedy show for our troubled times. Ahead of its premiere, I sat down with creator Vernon Chatman to discuss the creative process, his inspirations and the story behind his unique approach to the spooky folk tale that serves as its iconic closing theme.

FANGORIA: So for FANGORIA readers who may not be familiar with the show, tell us about it?

Vernon Chatman: It’s just a relentless spewing of insane, absurd stories that fly at your face in an endless stream, hard and fast, in stop-motion animation.

FANGORIA: And everything in the show is stop motion, correct?

VC: Everything, yes. We use every tactic in the book for special effects, but every character and every thing is … completely hand-made, hand-crafted by these people, House Special animation production house in Portland, Oregon. Every character is designed, drawn and then hand-sculpted and the faces are hand sculpted and every piece of clothing and hair is hand-made. Every frame is hand-animated in a real way. Which is not very common. It’s still very different to our eyes that are used to a lot more CG animation. Even if you don’t know what, consciously, is going on, I think it does have a little bit more of a magical effect to your eyes than computer animation.

FANGORIA: How long does it take to do an episode of the show?

VC: It’s broken down in various ways, but the broad picture is we do a season - which is only six episodes, we can only do six at a time before everyone goes crazy and starts killing each other - because it’s very labor intensive -- I’ll give you this. From writing to turning it in is probably nine or 10 months. That’s writing and recording and doing an animatic, and the actual animation itself is about four months. Then there’s a couple of months of pretty heavy effects and post-production.

FANGORIA: What’s the most challenging aspect of the animation process?

VC: For me personally, it’s not hard because I am not left with any of the skills and talents of all these people who actually physically handle the hand-crafting and animation of all this stuff. So to me, it’s all so beyond my abilities. I look at it and I marvel. It’s so easy for me to come up with “a guy takes a spoon and scoops out somebody’s guts.” And then I walk over and somebody is hand-making a teeny tiny spoon. I could’ve said fork, I could’ve said something else, and these people are meticulously hand-making everything. All these crafts people, they really enjoy it. So for me the hardest part is coming up with scripts that’re worthy of all this incredible work that people are going to have to do.

VC: This entire project is all about a rushing river of stream of consciousness that kinda never ends. So our hope is the river picks up exactly in the place it was. I think a lot of the stuff has improved because we’ve gotten smarter about how to do every process of the production. Part of the thing about this whole project is it hopefully is changing dramatically every two minutes, so we don’t necessarily need any more change than that. It’s forever morphing, and I hope it continues to ever morph.

FANGORIA: The show is a horror comedy series, in that it’s very comical but it’s also got very dark, mordant elements, like the guts-scooping you mentioned a moment ago, or a story in season one about a school nurse who turns students into deli meat. What are your inspirations for the more horrific elements of the program?

VC: My real inspiration is wanting to see somebody shave somebody into deli meat, and the inspiration for wanting to see that is stop-motion animation and these figures that are small and all the things you can do. As soon as you see these small figures moving around, and they’re animated, your brain goes “anything can happen.” It has this real uncanny creepiness-- that it looks like a person and it moves like a person but it’s off. That creepy uncanny feeling that gets into your brain? I want to do things that feed into that feeling and push that feeling. The specific inspiration is this form of animation can handle anything, and I want to push stop motion in all different directions to see what is fun to do with it. And I guess my brain happens to go to fucked-up, dark places, because it tickles me. But I’m sure every kid picks up a doll and starts to bend its legs backward and see how often you can pull its head off and shove it back in and upside down… So it’s a little bit of that. The joke for us is you take it incredibly seriously, this horror and playing with dolls, you take it with this incredible, deadpan seriousness, as though it’s all intensely epic.

FANGORIA: You mention the uncanny and trying to hit that sort of uncanny valley in the human brain; what’s your gold-standard for cinematic uncanniness? If someone came to you and said, “This show reminds me of x,” who would that person be where you’d just go, “Oh, I’ve achieved something, it’s amazing to get that comparison.”

VC: The greatest to me in that world is Luis Bunuel. When I think of the person who really synthesized all of this, in the same world of elements I want to synthesize, Bunuel to me is just the greatest. And then there’s also music and stuff like that, that does it, that transports you to a feeling you can’t put your finger on but it’s fun. The Pixies. Lenora Carrington is a painter and an author who does children’s stories and strange short stories and who’s an incredible surrealist painter. Those kinds of people.

FANGORIA: Speaking of the music… I got to see the pilot back when it was showing as a short on the festival circuit, and one of the many things that stuck with me is that eerie, choral recording of an old folk melody you use over the end credits, “Long Lankin.” How did you come up with the idea to make that the series’ theme?

VC: I’m friends with Lucy Wainwright-Roche. With her sister, Martha, she did an album of dark lullabies. The “Long Lankin” song was on that album and it’s so beautiful and weird and creepy and sweet and melodic, and I immediately thought, “Oh, that’s gotta be the closing credits song.” Then I had some of my favorite musicians to do different versions of it. Because something that I wanted to do, because the show is always changing, is that there’d be things that are consistent about it, like the length, but then have the song always changing. So we’ve had great musicians, like Will Oldham, Bill Callahan, Tunde Adebimpe from TV on the Radio, and this season we have Panda Bear, Matt Berninger from The National, Frankie Cosmos; all these incredible musicians do their version of the song for the closing credits.

FANGORIA: With all the great musical acts you’ve had, and then all the talented voice artists and actors like Maria Bamford and Jordan Peele and Martha Plimpton you’ve had on the show, who would be your dream collaborator to have come in and work on an episode, in any capacity?

VC: Oh, boy. I work with so many of the people that have fulfilled that dream. Like, I so wanted Miranda July to do a voice, but I don’t know her. And she did it this season. I just love her presence and the quality of her voice, the tone, the sort of aura that she brings to things. What people ... Bob Dylan. I would love to have Bob Dylan do his version of “Long Lankin.” That would be my dream. Right before he dies. I’d like for him to do it as he’s dying, with his dying breaths. I would like to get his dying breath on tape, then seal it in a jar.

FANGORIA: Since this is FANGORIA, I’ve got to end on a horror-y note here-- what’s the darkest sketch you’ve done?

VC: It’s so hard for me to judge what other people find dark. The thing is I’m very squeamish. I don’t like watching fucked-up videos, violence, blood, people getting hurt, but I enjoy inflicting it on other people I suppose [laughing]. The darkest thing I’ve done? Jeez. I’ve had the earth blow up in several episodes. That’s pretty bad, although it’s happening right now in slow motion, every day. Usually the things that are the most horrifying are the small things. The earth blowing up isn’t actually that creepy. But someone having their back fed through a deli slicer til thin slices of meat come off is somehow worse.