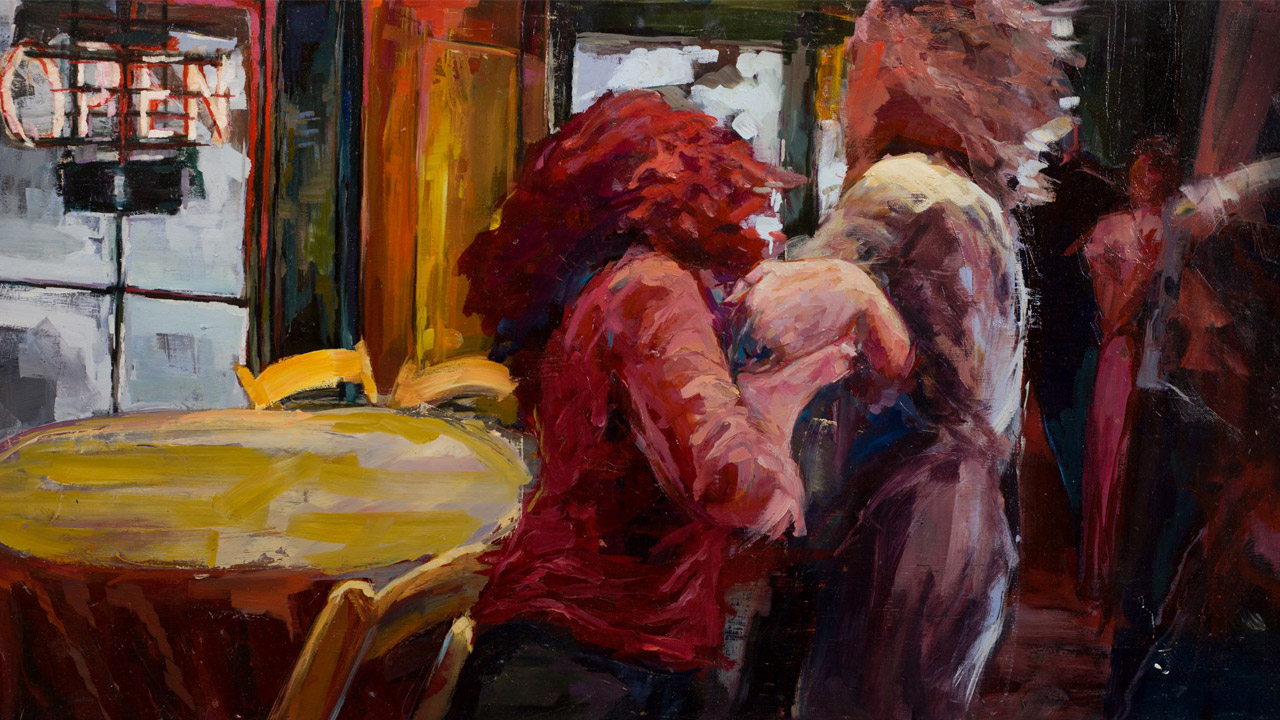 One of my various internet jobs is to introduce people to cool art by cool (non-horror) artists, so when I happened upon the work of Georgia Hinaris at a student art show back in April, I knew I wanted to share it with as many people as possible. I got the chance to chat with Georgia via Google Hangouts recently and learn about her horror influences, how she turns screenshots from horror films into fine art collages and how the fear of being sued has helped her carve out a unique niche in the horror art world. If you just want to read the interview, skip ahead a couple of paragraphs while I talk about myself. I swear it’s relevant to the conversation.

Like most horror fans my age (old enough to remember Laserdiscs and Oregon Trail in elementary school, but too old to get TikTok), a big part of my introduction to the genre came in the aisles of video stores. Picking rentals based on the covers was a weekly ritual. While my mother liked horror movies and my sister and I saw plenty of them maybe before we should have, there are dozens of films that I still haven’t watched but I can spot the box art 10 yards out.

As I got older and started collecting movies, posters and other entertainment-related stuff, I became a lot more familiar with the artists across genres whose paintings were used to sell the VHS cassettes and DVDs that raised me. Then shit got crazy. I bought poster books, auction catalogs and monographs to study the classics like Drew Struzan, Saul Bass, Bill Gold, Bob Peak and John Alvin. Then came contemporary artists and the whole alt poster scene with guys like Ghoulish Gary Pullin, Jason Edmiston, Tracie Ching, Vance Kelly and Akiko Stehrenberger. Basically, I like when two things I love (movies and art) are put together. That’s why I had to talk to Georgia.

Georgia is a horror fan. She is also a fine artist who had the brilliant idea of combining her two loves into some of the best mashups (or collages) I’ve ever seen. ‍

FANGORIA: Care to introduce yourself to the readers?‍

Georgia Hinaris: Yes, of course. I'm a Brooklyn-based painter originally from Chicago. I take stills from horror films and collage them together in order to form original compositions to paint. ‍

FANGORIA: I think I mentioned this before in an email, but I was introduced to your work at one of the New York Academy of Art MFA student shows. I think that was last year [2019]?‍

FANGORIA: And before NYAA, you studied Painting at Pratt? When did the horror-themed works start?‍

GH: I originally worked from crime-scene photos and vintage erotica but grew tired of repetitive black and white imagery. I wanted my paintings to be more dynamic, complex and colorful while still being tied heavily to something I cared about. A month before the start of my second year, it finally dawned on me to make paintings about the only thing I love as much as painting, and that is horror movies. ‍

FANGORIA: That's awesome! The thing that drew me in (other than the cool way you decorated the entrance like the opening of a spooky lair) was that your mashups aren’t at all obvious. No offense to those who do, but you’re not inserting big franchise killers into other horror scenes or recreating VHS box art in your style ...‍

GH: That's partially because I don't want to get sued, haha. I'd fucking love to paint Jason [Voorhees], but it's probably best I stay away from direct images of him or any of the other big names.‍

GH: I also enjoy finding beauty in random moments, I'm looking at a lot of these movies for compositions and movements. I do have a painting with Bub [Day of the Dead] giving a salute; I think that's the most iconic moment I've painted.

FANGORIA: I’m not sure if the term ‘deep cut’ is valid in 2020 when just about everything is available online or as a fancy new transfer on disc, but I assume you’ve had to brief your art professors and studio mates on films like Alice Sweet Alice, Videodrome and Blood and Black Lace?‍

GH: I have, although even the more famous ones I still have to point out because they usually aren't obvious unless you really know the movie.‍

FANGORIA: Truth. I self-identify as a horror fan but freely admit that you’ve painted references to several films that I haven’t seen…and a couple that I have seen but didn't immediately recognize.‍

GH: I want people (especially horror fans) to be able to recognize the imagery, but I also seek to make paintings that can be enjoyed by everyone. Especially those who refuse to watch them. I haven't even heard of all of them!

‍FANGORIA: Is that why you include the names of the films in the titles of the paintings? Sort of like a cheat sheet so everyone ‘gets it’?‍

GH: Yes, and because the paintings are meant to be tributes to them. It's also meant to be an overall celebration of the genre. I take from the ones I hate, ones I love and a few that I've never even heard of spanning from the ‘60s until now.‍

FANGORIA: Deciding which movies, and more specifically which scenes, will work together seems challenging. Especially for the ones you haven't seen.‍

GH: Well, I still go through the entire movie. I just skim through it trying to find moments that look like paintings to me.‍

FANGORIA: So how do these individual moments become mashups? Also, do you call them mashups or something else?‍

GH: I never thought to call them mashups. Now I feel like I should, haha.

‍FANGORIA: Definitely don't let me change what you call it!‍

GH: They're put together on Photoshop. I always considered it either collaging or combing. It's challenging. I had over 5,000 screenshots from about 130 movies that I cut down to a little over 1,000 because it was too overwhelming having so many options.

I try to tag them — figure, scene, stairwell, etc., but even that is hard to keep up. I find a lot of visual similarities in different movies that I try to bring together. I take images from visually different environments and bring them together, too.

‍FANGORIA: Do you watch horror movies while you paint, or is that too many Inception levels at once?‍

GH: Lately, the way I've been approaching it is by rounding down to my favorite moments, isolating the part of the composition that I find most appealing and then finding a way to combine it with another.

I used to watch them when I painted in my room when I was in high school. I actually believe they've always had an influence on the way I paint because all of my paintings have violent strokes.

GH: Anytime I get to paint one of my favorite movies, it’s fucking ecstasy. Like, holy shit, a fine art painting from a Friday the 13th movie gets to exist now? My Videodrome painting is my favorite because I absolutely adore Videodrome. I also adore the 2006 The Hills Have Eyes.

I think it's hard to say what my ideal collage would be, though. There are so many movies I love and so many moments I love from movies I don't care for. I'm inspired by so much, which is why I'm constantly trying to crank out as many paintings as I can. ‍

FANGORIA: How has the response been to your work here in New York? In my experience, there is a bit of a horror scene here, but it's not as prominent as it seems to be in LA and some parts of Canada, for some reason.‍

GH: I don't really know the response to my work especially from any horror scenes because I'm still in the beginning of my career and haven't done the best job of getting my work out there. Generally, people admire the paintings for their quality and don't really care what the source was. What I'm told the most is that people like the way I handle paint.‍

FANGORIA: Outside of the art, do you have friends who share your love of horror?‍

GH: I've only met a few people who are fellow horror fans. It's always amazing finding out someone else has a collection of movies. Prior to meeting me, my best friend hadn't even seen A Nightmare on Elm Street. Now she's her own little connoisseur.‍

GH: I know, haha. She says her coworkers now come to her for suggestions.‍

GH: Do you mean like fellow painters or film directors?

GH: I don't know of any other painters who paint from horror movies outside of the few Damian Loeb did … and Peter Doig's Friday the 13th paintings.‍

FANGORIA: I can definitely show you a few more. What's the last new-release horror movie you saw?

‍GH: The Lighthouse. It was my favorite movie this year.

‍FANGORIA: And one you're most looking forward to in 2020?‍

GH: Halloween Kills. ‍It’s movies like 2018's Halloween that demonstrate a major theme in my work, and that's the feminine empowerment of horror. It’s just so dope to see women in those sorts of roles. Horror is a rare genre that has a trope that's empowering to women.‍

FANGORIA: Since the new motto for 2020 is "fuck you, sue me," are we going to see Halloween Kills and The Lighthouse in an upcoming painting?‍

GH: Oh, I’m planning on screenshotting the shit out of The Lighthouse as soon as I can.‍

FANGORIA: If he's as cool as I think he is, he'll see this interview and be waiting for the art.‍

GH: Especially because a painting inspired by The Witch was what started it all for me.‍

Andrew LaSane is a Brooklyn-based writer, editor, and sneaker customizer born and raised in Charleston, South Carolina. He spends his days freelancing, listening to horror and pop culture podcasts, and preaching the gospel of 1986's Howard the Duck.