In the Closet, On the Floor: My Personal FANGORIA Horror Story 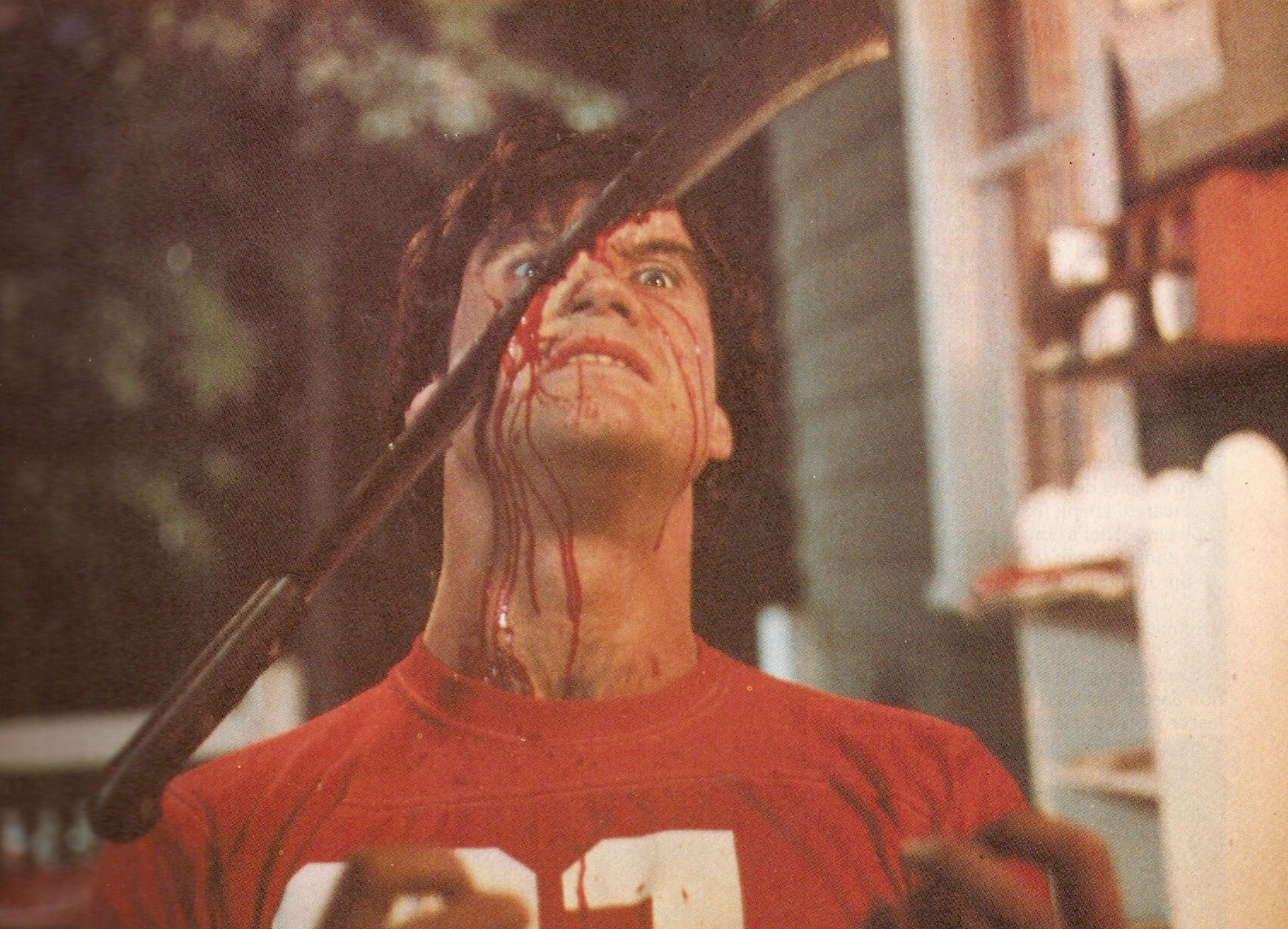 Tom McBride takes one for the team in "Friday the 13th: Part 2."

In the Closet, On the Floor: My Personal FANGORIA Horror Story

grew up in the 1980s, and my weekly allowance was reserved for basically two things: movies (be they delivered in theaters or by VHS rentals) and essential reading materials such as MAD Magazine, Choose Your Own Adventure paperbacks, and, of course, FANGORIA. Even back in the mid-'80s, a new issue of Fango took a healthy percentage of my pocket money, but I didn't mind. Even in my early teens I was an insatiable horror movie fanatic, and I looked forward to the new issue like a comic-book junkie who couldn't wait for the next Batman, Spider-Man, or Groo the Wanderer (which was always my favorite).

Obviously, I shared each new issue with my neighborhood movie pals, but I never loaned any out. I kept an eye out at flea markets for back issues and built a cool little collection of FANGORIA that I kept in a neat stack on the floor of my closet. All told, I had about 30 issues that ran from 1980 to 1985, and I looked forward to building a full set as the years went on. I'd had a baseball card phase, I still loved my little-used Star Wars action figures, and I always collected random comic books here and there, but my big, neat stack of good-condition FANGORIA magazines was my new favorite hobby. Not only were there untold horror movies yet to enjoy with my incredulous friends, reluctant sister, and wonderful grandmother, but now I had a collection of literature that legitimized horror flicks in a way I could not. To me, FANGORIA was proof positive that horror films were not only art; it was evidence that I could show to skeptics who thought scary movies were stupid or pointless or low-class. I learned a lot from each new issue before tucking it into "the stack" on the floor of my closet.

Then one day I came home from school and discovered that every single issue of FANGORIA that I owned had been shredded and dumped onto my bed.

But first, here's a little bit about my parents. Growing up, my mom supported all my habits and hobbies. She didn't care for baseball or Star Wars or MAD Magazine, but she knew I did. And she definitely didn't like horror movies, which I was obsessed with, or heavy metal music, which my sister loved. But while we were sometimes asked to turn the music down or to watch a funny movie for a change, my mom was always cool with my "odd" horror hobby.

My dad was another story. While I was growing up a loud and opinionated little movie nerd, my dad was pulling people out of burning buildings for the Philadelphia Fire Department. He slept a lot, he liked the house to be very quiet, and he had little in the way of a funny bone. He was also grumpy, grouchy, demanding, and sometimes even worse. So on the one hand, my dad is a legitimate hero who has literally saved hundreds of lives, but when I was a kid he was also sort of a jerk. He didn't like my taste in movies, and he definitely didn't want me spending my allowance (aka his money) on MAD Magazine.

And then one day while I was at school he discovered FANGORIA. In a big stack on the floor of my closet. And clearly he was not pleased.

So there I stand, staring at a bed coated with shredded paper everywhere. No explanation. Just the aftermath, and the message: Don't bring this stuff into my house. Looking back, I see two small bits of irony. One is that the bed looked like a murder scene from a Friday the 13th movie, only with shredded paper instead of fake gore and carnage. The second piece of irony is that if my dad had been able to look past the gory images on the front cover (and the awesome fold-out) and actually read some of the articles that explain the artistry of genre cinema, he might not have hated the magazine -- or the movies -- so damn much. His loss, I suppose. The magazines, however, were mine.

The epilogue is a little anticlimactic, perhaps. My mother ended up confronting him about the FANGORIA Slaughter later that night. I'd already tossed the whole mess into the trash and got into bed, but I could hear them arguing. All I really remember is hearing my mom say "So what? I've read it! Some kids don't like to read at all!" and "It's just horror movies! It's not like it's porn!"  I wasn't surprised that she was on my side (she usually was), but it was still nice to hear. My mom wouldn't know Jason from Freddy from Michael Myers, nor would she care to, but she knew what made her kid happy, and man was she pissed off at my father that night.

I'm still not entirely sure what it was that my father found so disturbing about FANGORIA. I think it may have been the fold-out from Friday the 13th Part 2. (The machete in the head of the poor guy who tumbles down the stairs in a wheelchair.) To someone who knows nothing about horror movies beyond the Universal Monsters, I suppose some of Fango's more gruesome and graphic images could be highly offensive, and if they thought their young son was reading subversive or damaging material, they might, I dunno, shred 30 separate issues of that magazine with their bare hands and leave it on their kid's bed like a weird crime scene?

I don't really know. He never explained nor apologized. Like so many other things, the whole affair was simply forgotten, and my dad wasn't the kind of guy you confronted. (I probably didn't talk to him for a week, if that makes you feel any better.) He wouldn't have understood the comfort and community one finds when a new part of your personality just clicks into place. But I learned a valuable lesson in the end: Good parents (and good people, period) accept you for who you are. Even if they don't get the foods you like or the clothes you wear or the gory movies you choose to watch. My father’s bizarre tantrum  certainly did nothing to extinguish my love for FANGORIA or for horror cinema; and my mother, like most mothers, is a freaking superhero.

So please remember this story the next time your own kids, parents, or friends have a new obsession you just don't understand. You don't always have to understand.

Scott is a lifelong fan of horror films, comedy, and cats. He's written about film for outlets such as Playboy, Fearnet, Nerdist, Thrillist, Cinematical, and probably a dozen more, and has also produced films called Found Footage 3-D, I Trapped the Devil, and STOP. Like all movie nerds, he also has a podcast (called Science vs. Fiction) and shares his opinions on Twitter (@scottEweinberg).