In Pop Culture, 'The Babadook' Is An Invasive Species 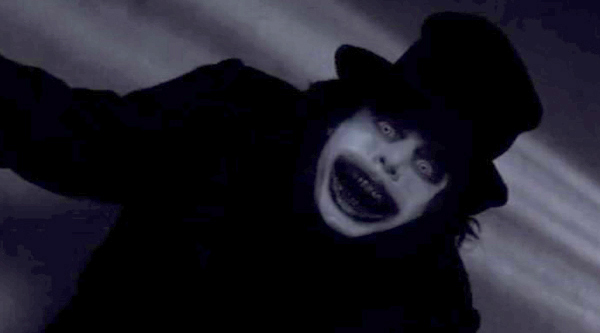 In Pop Culture, 'The Babadook' Is An Invasive Species

ennifer Kent’s The Babadook makes a metaphor out of grief and loss, a two-pronged demon that follows the bereft from their moment of misfortune through the rest of their lives. What Kent likely didn’t anticipate when the film opened in 2014 is that her dapper monster would function the same in pop culture: an entity that, no matter how much time passes, resurfaces here and there when least expected, rearing his leering mug on TV shows everywhere. Either the golden age of television can’t get rid of Mr. Babadook, true to the children’s rhyme that summons him when spoken aloud, or it doesn’t want to.

“It’s a classic Beetlejuice/Babadook situation,” declares Frankie (Lily Tomlin), a warning that by naming “the thing,” you give it power.

Last, but absolutely not least: Stephen Falk’s You’re the Worst, which name-drops The Babadook not once, not twice, but three times over three years, from seasons 1 to 4. First, in “Spooky Sunday Funday,” the gang visits an extreme House of Horrors on Halloween and discovers that the haunters in charge somehow managed to wrangle themselves “a real life Babadook.” Next, in “The Heart is a Dumb Dumb,” Vernon (Todd Robert Anderson), one of the least trustworthy people in the series, opens up about his fears of fatherhood to the attendees of his child’s gender reveal party; he leaves them with one last nugget of wisdom, that he regrets seeing The Babadook, on the grounds that “it was so scary, you guys!”

Rush to S4’s “Dad-Not-Dad,” which opens on Boone (Colin Ferguson) complaining to his cable provider that The Babadook wasn’t scary in an effort at getting a refund on his VOD purchase. It’s a scam, though: He found the film terrifying and just wants to screw with the cable company. Maybe it’s just Falk in particular who has an affinity for Kent’s expressionist masterpiece.

“We’re all very tuned into pop culture,” he told Fresh Fiction in a 2015 interview, speaking about the show’s writer’s room, “and I’m aware that those kinds of references can often not be evergreen, can kind of date something, but at the same time, my belief is that the more specific you get in building your world, the more universal you can be.”

He’s right about everything except this: The Babadook is totally evergreen. That’s what the whole damn movie is about. People mourn, and the pain of mourning never totally subsides. It lingers like a phantom limb. Instead of looking for ways to liberate oneself of that pain, nurse it, care for it, and coexist with it. If you’re fool enough to try to purge the pain, it’ll come back on you double. Best make peace with your sorrow lest you spend your days slowly self-corrupting in anguish. Single mother Amelia (Essie Davis) and her rambunctious son Samuel (Noah Wiseman) learn this the hard way when a pop-up storybook titled Mister Babadook appears on Sam’s shelf out of nowhere; one readthrough later and the top-hat bedecked fiend begins hounding them both, unrelenting in his pursuit no matter what Amelia does to evict him, including a backyard book burning.

The creature persists until Sam reminds Amelia that try as she might to expel the Babadook, they’re stuck with him. So, she lets loose a primal scream that sends the beast scuttling to the basement where he remains as the film ends.

He’s tamed but not gone, which handily describes his position in pop culture as an in-joke for horror geeks who can appreciate the thematic resonance of Mr. Babadook’s sustained pop cultural cachet. Pop culture can’t shake him, either, but then again, why would it want to? Maybe casual asides and wisecracks about Kent’s ferocious creation —one part Freddy Krueger, one part Edward Hyde, one part Kayako Saeki, and one part Jaws’ great white — is how pop culture comes to terms with The Babadook’s mid-decade impact on the escalating rise of horror as the 2010s defining genre. Even now, the film serves as a touchstone for whatever hot-ticket horror flick makes a splash at the Sundance and Fantastic fests, as if no other horror movies exist as a frame of reference.

And it will continue serving as a touchstone as we leave this 10-year stretch behind us and move on to the next: SyFy’s The Magicians makes a nod to Mister Babadook’s high-class style in the second episode of its upcoming season. (Apparently, “Babadook hats” are the new fashion in Fillory.) Will he persist beyond? Perhaps an appearance in Reading Rainbow, should LeVar Burton finally get a revival off the ground? (“Butterfly in the sky / I can go twice as high / Just take a look / It’s in a book / It’s the Babadook!”) Or maybe he’ll show up to harangue the Tanner-Fullers in Fuller House. (“Everywhere you look / There’s the Babadook!”)

The Babadook could show up anywhere in the 2020s, and beware: He will show up. He has his claws on pop culture’s pulse. There’s no getting rid of him now.

Boston-based freelancer Andy Crump has been writing about pop culture online since 2009, and he's been watching horror since he was 10. He is composed of roughly 65% craft beer.