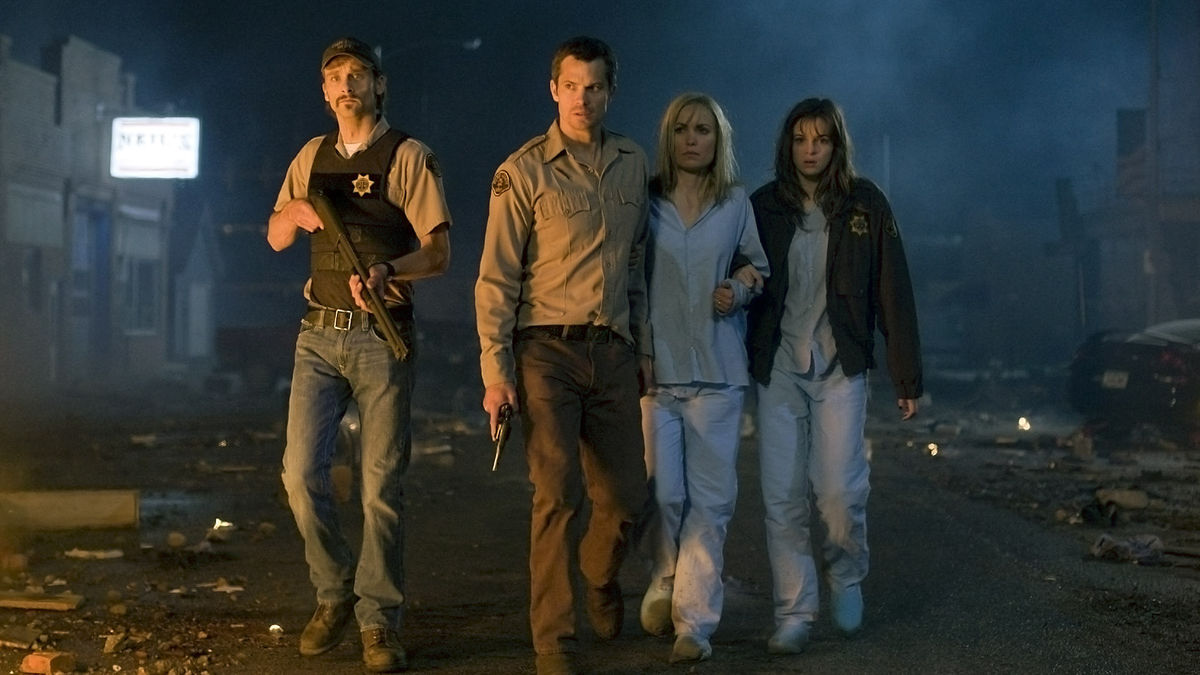 There are ads, which means you’re now facing the peculiar reality of watching uncut Ilsa movies with commercial breaks, but as you might’ve noticed this week, we’re living in strange times. That’s what was on my mind as I pulled up the Vidmark channel and fired up the 2010 remake of George A. Romero’s The Crazies.

Full disclosure: I’m a former epic drunk, and movies from ten years ago are often akin to recovered memories for me. Sometimes revisits carry the feeling of legitimately new experiences. I know I saw The Crazies in theaters, and I seem to remember thinking it was fine. Romero’s 1973 original isn’t some sacred work, and its premise (a town is besieged by a plague of madness when a man-made virus is accidentally leaked into the water supply) lent itself well to updating. I watched it once and moved on. As of this week, I had no working memories of the film, so it was very much like a first-time viewing. And I was doing it in the middle of a global pandemic.

This, friends, was a terrible idea.

The Crazies is a fine remake, and an assured horror movie on its own. Director Breck Eisner does a solid job of making the town of Ogden Marsh feel authentic and lived in, even with a too-attractive leading cast (Timothy Olyphant, Radha Mitchell, Danielle Panabaker) and a salt-of-the-earth supporting roster right out of central casting. An early moment of normal life being disrupted in a banal yet horrible way hits just the right uneasy note, as we can all now attest. A scene in which a politician ignores the early warnings and makes a decision to further endanger his constituency? Yes, this all feels correct. These early scenes landing as well as they do make the next few scenes a little tough to get through this week, if I'm being honest. Armed forces rounding up citizens, subjecting them to temperature scans to determine infection and segregating those with fevers, gunning down the dissenters? Yeah, I did not need to see that this week.

Mercifully, Eisner keeps it all a bit Hollywood, which might help you from taking the whole thing too seriously. In Romero’s original, you couldn’t visually tell who was infected and who wasn’t. The infected  just started acting crazy (hence the title). Eisner opts to have the virus eventually manifest in a physical way; the victims are eventually oozing and bruising like a batch of bad fruit, zombies who don’t bite, and that makes it a little easier to disconnect from the Romero allegory of it all. A little.

Like our current pandemic, there’s a bit of a second-act sag to contend with, but don’t you worry; soon the characters we care about are, as one expects we all soon will be, forced to make heartbreaking choices and endure some seriously terrible shit and, well, these were things I didn’t need to be thinking about today either. To the surprise of no one, I cannot recommend watching The Crazies as you live through an actual global pandemic, but if there’s any upside, you’ll be grateful that COVID-19 does not turn your neighbors into bloodthirsty maniacs.

The most chilling scene in Eisner’s The Crazies has nothing to do with mindless, infected killing machines popping out at you from behind diner counters or blacked-out buildings. Midway through the film, the protagonists come across a group of rural hunters who’ve taken to chasing down the infected and piling their bodies up in their pickup truck after picking them off. For a minute here, the viewer is unsure if these men are infected or just naturally gone bloodthirsty, let off the leash by the collapse of society. The idea that your neighbors -- maybe sick, maybe not, but their mask of civility gone either way -- will essentially go full apocalypse and start shooting anything that moves to amuse themselves when the power goes out will hit you in 2020 in a way it couldn’t possibly have done a decade ago.

Here is the real terror behind any pandemic movie, or any actual pandemic - the idea that the invisible line between order and chaos has been erased, and we don’t realize it’s gone until it’s too late. Eisner’s The Crazies doesn’t have a ton of this, but when it does, it’s like a knife in the gut. Flashy editing and a sexy Hollywood cast can’t hide the central, oh-so-Romero idea that you must not only fear a biological contagion, but the sociological sickness that comes with it - the one that will turn neighbors against each other, left to their own murderous devices by incompetent politicians who turned a blind eye to the problem, and surrendering the better angels of their nature to the anarchic, burning sinkholes their institutions have been transformed into overnight.

Phil Nobile Jr. is the Editor-in-Chief of FANGORIA.