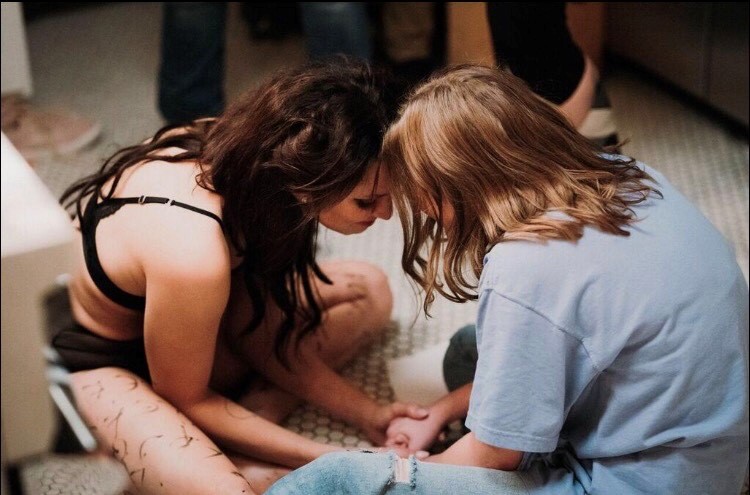 FANGORIA's SATANIC PANIC just dropped on Blu-ray and DVD this week, and to mark the event we asked star Hayley Griffith to write about her experiences on the set of the film. Her account is as funny and charming as her performance in the the movie. Pick up SATANIC PANIC on Blu and DVD today, and enjoy Hayley's candid account below!

hat’s the best way to form a strong friendship? Over blood, bile, and lots of worms. Of course.

Let me start this in the most profound and eloquent way I can … so, does anyone remember that scene from Step Brothers, after bonding and realizing their similarities, Brennan (Will Ferrell) says to his new step-brother Dale (John C. Reilly), “Did we just become best friends?!” And Dale enthusiastically answers, “YEP!” That is the best way to describe my relationship with Ruby Modine after filming THAT kitchen scene.

Now to be fair, there was a bond between the two of us from the beginning that everyone immediately noticed. I mean, just the way we acted with each other had people asking us, “Oh you guys already know each other?”

To which our reply was, “No, we just met today!”

But for me, I think the moment that really solidified our friendship was the day of filming the skin-sealing scene (which was also our second day filming together). For me, that day was one of the craziest/most intense days on set. That scene has so many moving parts that needed to fit together perfectly all within one day of shooting. So, the pressure was on.

I have this funny, vivid memory of Ruby and I being squeezed in this small kitchen surrounded by crew members, sweating our butts off since the kitchen was covered in lit candles. So, between the sweating, paragraphs of emotional dialogue, having to put this Enochian writing all over Ruby, and just mainly trying not to fuck up any of the special effects (which I had never worked with before), I was a little overwhelmed. So, I was very quiet on set that day, which was VERY odd for me, as someone who likes to ham it up at all times. And while I had all of that to focus on, Ruby had just as much. Considering that [Modine's character] Judi has all of these terrible things happen to her during that scene, Ruby had an insane amount of special effects work to do that day.

Right before we started the special-effects portion of the day, there was a beautiful moment, which thankfully was captured on camera, between Ruby and me. We took a moment to sit on the floor, put our heads together, hold hands and close our eyes. It was just a sweet, peaceful moment together, prepping for the insanity that was ahead. We used that moment to build each other up, just reassuring each other that  “we’ve got this” and that we are here for each other. Which for me, put me at such ease and gave me a great deal of comfort. And after that moment, we were calm and ready.

Despite being initially stressed, shooting that scene was a blast and is one of my favorite memories of shooting. However, my favorite moment of that day came after Ruby put WAY too many worms in her mouth and vomited them onto the floor/into my hands. I (and some of the crew, you know who you are) were just dry heaving in the corner after she first did it. Ruby, on the other hand, after “vomiting” these worms not once, but TWICE, uttered the phrase, “So what’s for lunch?” I laughed, thinking it was a sick joke. However, two minutes later, she comes walking back on set … eating pizza. The only thing I could say was, “You’re the baddest bitch I’ve ever met.” And I meant every word.

The rest of the day included prosthetic dummy heads, needles emerging from eyes and fingers, bleeding eyes, a mouthpiece rigged with long hair, bile spit on my face, and lots and lots of marker. I truly felt like I was living out my weird, little kid dream! And Ruby and I spent every moment off-screen that day (and every day after) very close to each other, just making each other laugh.

Also, fun fact: After wrapping that day, Ruby and I were very hungry and decided to swing by Whataburger. The only problem was that we stupidly forgot that we were covered in bile, blood and marker. So, understandably, the workers looked horrified. Once we realized our hilarious error in judgement, we couldn’t stop laughing. So … sorry to those workers.

Seeing as this was my first film, I feel so incredibly lucky to have had someone like Ruby by my side through this experience and for us to support for each other. This is a friendship that I will always hold close to my heart. Sorry if that was too mushy, but I also DON’T CARE. Love you, Wuby.

Hayley Griffith is thrilled to have made her film debut as Sam in SATANIC PANIC. She has appeared in numerous television shows such as The Loudest Voice, Bull, and Law and Order: SVU. Hayley recently finished filming a leading role in the feature film Martin Eden’. As a huge fan of horror movies, getting to join the horror community has been a dream come true for her. Instagram & Twitter: hayl_griffith