Horror Movies Were Right: Large Gatherings Can Be Deadly

Are you sure you want to go to that kegger? 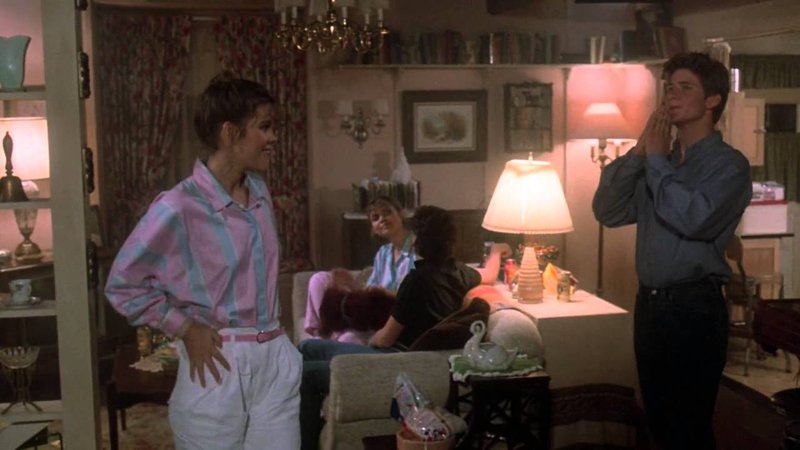 (Editor's note: this piece was written in March of 2020, during the initial weeks of the coronavirus pandemic.)

“Jeez, doesn’t the fun ever end in this place?” - Night of the Demons 2

I get it. Parties, especially crazy ones thrown in secret, tend to signify youth, defiance, sex and fun. As the burdens of adulthood start piling on before mercilessly fossilizing onto our souls, we start craving those heady and irresponsible days of dry humping, binge drinking, and crying in someone’s little brother’s room. It doesn’t get any easier when, say, there’s self-quarantining in place to hopefully help stem the tide of a global pandemic, and even those who are socially adverse in the best of times start craving karaoke and, I don’t know, limbo? (Do kids still like limbo? Did kids ever like limbo?)

It’s increasingly obvious that parties are often also about freedom. Back in the elysian days of casual contact, that freedom was often tied to happy milestones or just the work week ending. Now, the simple fact that you can stand shoulder-to-shoulder with someone and get your drinks out of the same punchbowl alone may seem like the ultimate in liberation, but trust me: That seductive notion is all hazy hindsight, and the punch is always terrible anyway.

I don’t get out much myself, so I’m going to need to rely on the most accurate documentation existing to convince everyone to both stay away from and stop romanticizing gatherings: horror movies. Did you know that in 10 out of 10 horror films that feature parties, people die 99% of the time? Don’t eyeball that 1% with hope either as those rare affairs are still chores unto themselves. As Saint Deborah Foreman showed us in the seminal April Fool’s Day, even if no one technically kicks the bucket, the party planning alone is a second job you’ll never get paid for. It’s hard enough being a perfect party hostess, but if you’re going to add some weirdo hijinks into the mix, you’re also dealing with special effects makeup, the psychological responses of your guests under intense pressure, and the complex mechanics of some kind of twisty ambush. Say what you want about John Kramer, but he never committed the faux pas of having a Jigsaw shindig. 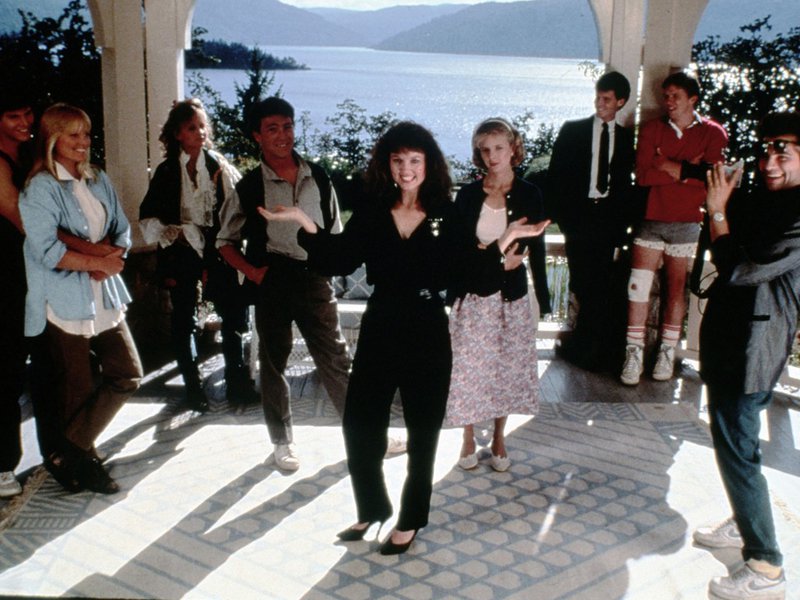 Not to mention, most of these movies reveal the universal truth that parties are really just populated by little social islands unto themselves. A couple of couples will move off to different rooms or a hot tub to get biblical; I swear to god someone is setting up a stupid prank in the creaky old attic; the peppy but strung out host is tearfully trying to keep the place from getting trashed; the nerds wander around to pontificate on their judgmental social hierarchical observations even though they’re by far the biggest, snootiest bores there; the “good kids” stay in the living room to tell ham-fisted ghost stories… Sure, that goth girl over there is really hot, but do you really want to watch her interpretive dance for half an hour before she rips your throat out? (No kink-shaming here, but c’mon, Angela, seriously. It’s getting late.) Humans and horror movie characters naturally pair off into their own small tribes, no matter how many stale chips or affordable sound-a-like rock music tracks they’re tempted with in the living room. Once you start sending people off in groups to check out noises, you’re a search party, and to that I say no thank you.

Even if you don’t end up in a dud group, once everyone splits up after they hear a noise or someone disappears, there’s still a good chance the decrepit house with the blood-drenched, hushed-up history you’ve all shacked up in is booby-trapped to high hell. Whether set up by an obnoxiously clever young person with revenge on their mind or some actual demons (the Night of the Demons series) or, why not, throw everyone into a nightclub and mulch them up like in The Collection, nobody has a good time with booby traps; it’s the #1 reason why John Rambo was never invited to any parties. Only characters like Nancy from A Nightmare on Elm Street or Erin from You’re Next had it right: Booby traps should only be used to dissuade uninvited houseguests.

Don’t even get me started on pranks. Imagine getting close to someone beautiful, like Linda Blair in Hell Night-level cute, then having some asshole in a bad werewolf mask jump out and almost knock you down the stairs. You almost died, and Lon Chaney Jr. over here couldn’t even shell out for a Don Post Factory original.

Nothing fun truly happens until terrible, ancient evils or psycho killers get directions to the party anyway, and then everyone is just killed off before they can really enjoy it. Next thing you know, you’ve stumbled into a room sporting a garish tableau of all your friends’ corpses semi-artfully arranged around a table with a gross cake or something: Happy Birthday to Me my foot. It’s just not worth it since, even if you end up surviving, your therapy bills afterward will be enormous. Nature’s only perfect party is a Scream Queen Hot Tub Party, and our chances of getting onto that invite list are slim to none.

Slumber parties have to be better, right? Sure, on paper the smaller guest list and the fact that women are populating the pillow fights decrease the chances of slaughter and mayhem… but the boys do tend to find them anyway, don’t they? Whether a herd of unwashed pubescent boys storm the place right before letting in some reanimated ghouls they just disturbed or an all-singing, all-slaying driller killer wielding a deadly guitar at a girl band trying to enjoy their weekend getaway, you don’t need to go all the way to Texas for a massacre. 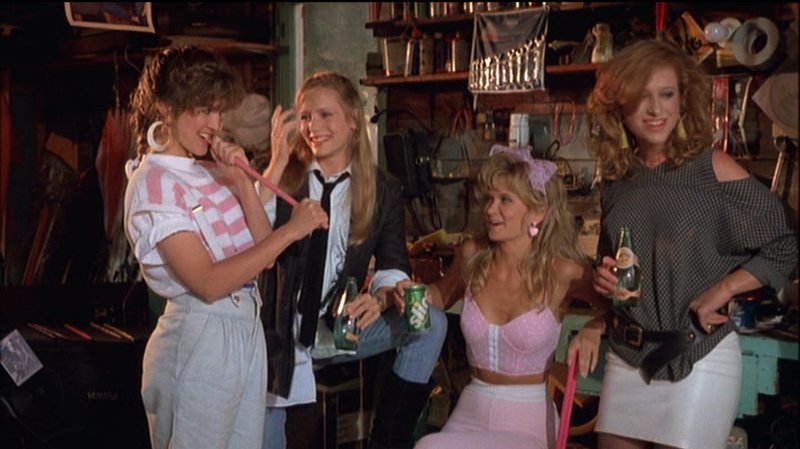 There are, of course, beach parties, which may seem safer simply because they don’t happen quite as often. But between killer sharks, piranhas, bad local politicians, waterlogged corpses reanimated and twisted by nuclear waste (The Horror of Party Beach), and biker guy turf fights, even the lure of a live surf rock band playing on the sand shouldn’t be enough to woo you into doom just to live your best Chicklet from Psycho Beach Party fantasies⁠ – as cute as they may be.

Still, the urge to be around friends and fiends is a strong one, and even when you have the whole gory, confetti-strewn truth laid out in front of you, the party animal’s heart wants what the part animal’s heart wants. Missing out on what psychologists call emotional contagion when it’s surrounding positive, light-hearted people and events, well... sucks. If you don’t quite buy my “field’ research, rest assured that nothing lasts forever, and live tweets and group chats are still something we’re pretty damn lucky to have.

Plan some remote movie nights with your pals. Impress your crush with some bespoke streaming recommendations. Thank your lucky stars that you’re not stuck at a rave in a cornfield. Before you know it, you’ll be back out there in some spiderweb-choked rec room, throwing down some kind of appetizer in disgust because it changed into bugs or fingers or something right as you brought it to your lips. As you stare at it laying on the floor, looking innocuous and delicious as your friends ask you what the hell you were just freaking out about, don’t forget: party hard, but survive harder.‍

Please note: None of this party bashing applies to 1985’s star-studded THE MIDNIGHT HOUR, which had the perfect mix of personable teens and real monsters in disguise enjoying the ambiance, including zombies indulging in some heavy petting with each other. God bless Wolfman Jack and no one else.