New images from Netflix's WEDNESDAY reveal that Burton is being highly faithful to the source material. 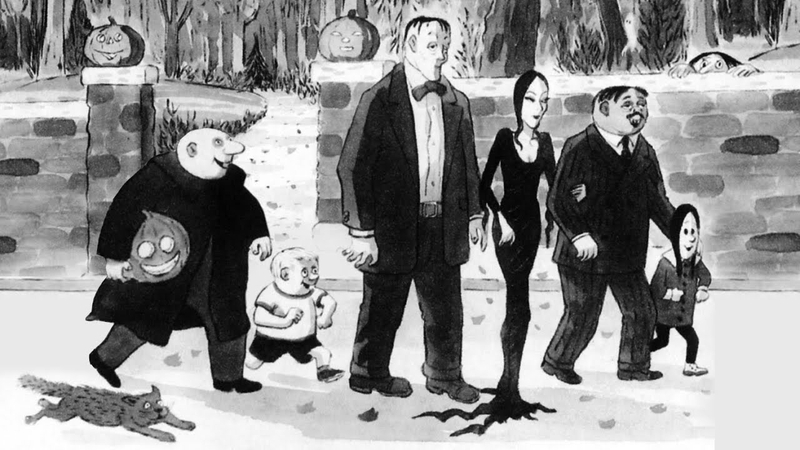 A new post over at Vanity Fair has provided us with our very first look at Tim Burton's Addams Family, as they will appear in Netflix's forthcoming Wednesday series. How do they look? Well, see that image at the top of this page? Compare and contrast with what's going on in the image below:

Exclusive: Catherine Zeta-Jones, Luis Guzmán, Jenna Ortega, and Isaac Ordonez suit up as the Addams Family in this first look at ‘Wednesday,’ the new @Netflix series from Tim Burton. https://t.co/9yNodVgqrp

With the exception of Pugsley now having dark hair, it appears that Burton is far more interested in maintaining the aesthetic of Charles Addams' original illustrations than he is replicating either the TV version of the characters or the characters as they appeared in Barry Sonnenfeld's feature film duology. To which we say: "Hell yes."

The highlight here has to be Luis Guzman as Gomez, right? Here, as in Addams' original illustrations, Gomez is much shorter than Morticia (seen above being brought to life by a typically luminous Catherine Zeta-Jones), and in appearance far closer to the character as he was originally imagined than the Gomez brilliantly portrayed by Raul Julia in Sonnenfeld's films. It's accurate to the source material, sure, but also: it's Luis Guzman. Have you ever been displeased to see Luis Guzman? I haven't!

Also worth noting: Wednesday (here played by Jenna Ortega) is a bit older than she's typically portrayed as -- this is, apparently, intentional, with Wednesday catching up with the character in her teenage years as she struggles with her mother's legacy and the standard trials and tribulations that come along with growing up.

Wednesday will premiere on Netflix later this year. We cannot wait.