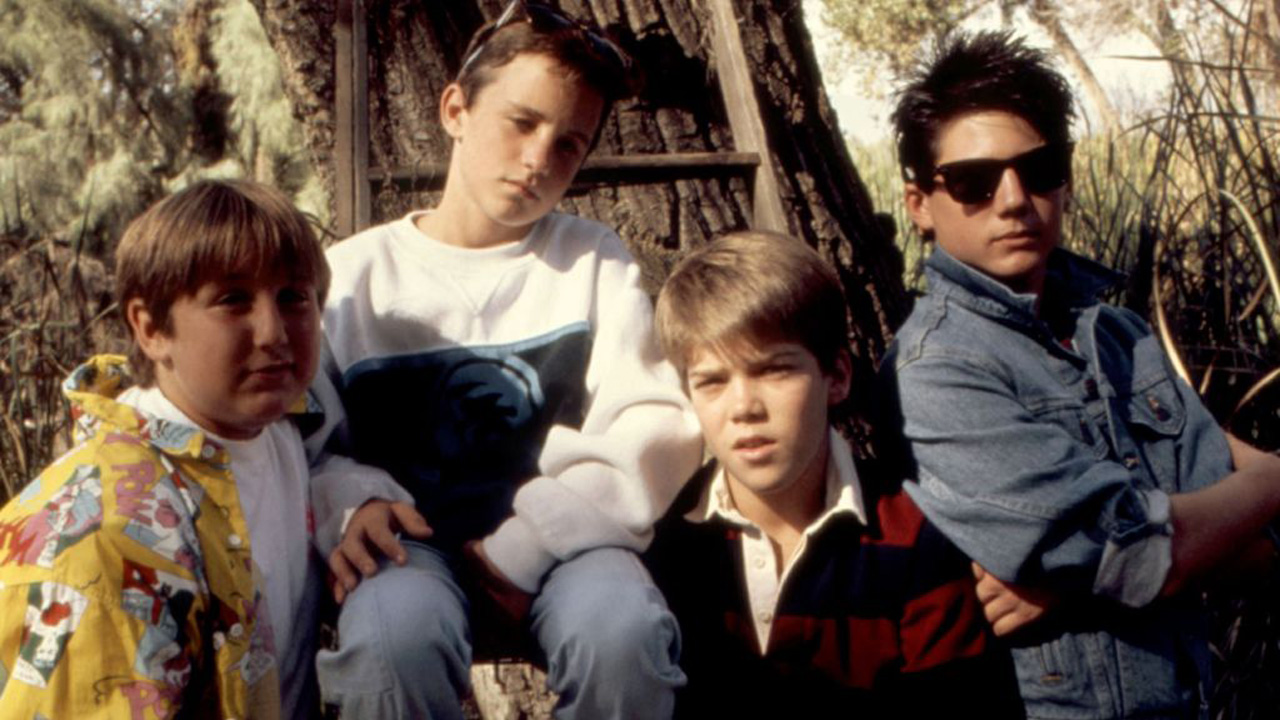 Do you have "Goosebumps" yet? (Universal Pictures/MovieStillsDB.com)

“Not a speck of light is showing

So the danger must be growing

Are the fires of Hell a-glowing?

Is the grisly reaper mowing?”

aybe you were the type of kid who saw the right horror movies at the wrong age. Your teenage babysitter would let you watch A Nightmare on Elm Street (1984) (joke’s on her … that’s just more babysitting she has to do) or your parents wouldn’t read the back of that green-stickered box from the horror section at the video store.

Or maybe your entry into horror was more, shall we say, spooky?

Submitted for the approval of the Midnight Society, it’s all what we can refer to as gateway horror.

These are the movies, the series, and the books that were your spirit guides to eventually becoming the hardcore gore-thirsty horror fan you are today. It’s the stuff that held your hand as you passed through those unholy gates and ultimately down the darker path. Hey, maybe that movie was literally The Gate (1987).

There was, of course, the appeal of watching something beyond your years at a young age that felt dangerous … like you were seeing something you weren’t supposed to. That is where you traveled through Willy Wonka’s bizarro tunnel and came out the other side into a world of pure imagination of horrors.

But for some of us, there were more innocent origins of evil.

That includes Goosebumps, Fear Street, and Scary Stories to Tell in the Dark books; TV series such as Are You Afraid of the Dark; movies such as The Monster Squad (1987) or Lady in White (1988); or even something like Hocus Pocus (1993) or The Nightmare Before Christmas (1993). All of Tim Burton’s filmography from the ‘80s and ‘90s, for that matter: Beetlejuice (1988), Edward Scissorhands (1990), etc. Perhaps it was even one of the many spooktacular Disney Channel original movies?! Like Halloweentown? (No judgment. Aggie Cromwell 4 life.)

R.L. Stine was the Stephen King for a younger generation. And sure, you could have also been reading Stephen King at the same time. But for those of you that didn’t have access to King, Stine was only an elementary school book fair away.

On The Dark Crystal (1982), Jim Henson (responsible for a number of gateway horror films such as The Witches) wanted to recapture the darkness of the original Brothers Grimm fairy tales that were his own gateway horror from generations past. He believed that children actually were drawn to the concept of being scared and that this was a healthy emotion for children to learn at a young age.

There's something really pure and innocent about gateway horror, akin to the Universal Monsters films (based on the original classical historical horror stories - the horror to begin all horror) or even classic Gothic tales like Washington Irving’s The Tale of Sleepy Hollow or Edgar Allan Poe’s The Raven. It’s a word that gets thrown around a lot now, but it’s the true definition of “spooky.”

Walt Disney understood it early on with animated shorts like Lonesome Ghosts (1937) and The Adventures of Ichabod and Mr. Toad (1949). It was in the DNA of Disney. In the ‘80s, Disney produced a number of live-action films for the big and small screen: The Watcher in the Woods (1980); Something Wicked This Way Comes (1983); and Disney Sunday Movie presents Mr. Boogedy (1986); the aforementioned Hocus Pocus; and Tim Burton’s The Nightmare Before Christmas (1993). Both were box-office bombs when they were released in the same year (Hocus Pocus in July?), but you would never know that now. You can’t walk around in October without seeing Jack Skellington or a Sanderson Sister, both now staples of the spooky season. And we don’t talk about The Haunted Mansion (2003) movie.

The small screen served as a more accessible gate. Right alongside Elvira and Joe Bob were The Addams Family and The Munsters. No coincidence that the two Addams Family films from the ‘90s are now considered classics (a Christina Ricci triple feature with 1995’s Casper); a new animated Addams Family film was released in 2019; and Seth Meyers has been developing a reboot of The Munsters.

With the current horror renaissance period, it’s no surprise that we’re also seeing a resurgence in remakes and reboots of all of these properties. Stranger Things is quite literally a dimension to another side of every ‘80s pop-culture thing it’s based on - namely horror and sci-fi films. A new Dark Crystal series debuted on Netflix in 2019, and The Witches is due for a remake from Robert Zemeckis in 2020. Goosebumps has now had not one but two successful films with Goosebumps (2015) and Goosebumps 2: Haunted Halloween (2018) leading to back-to-back Fear Street movies in 2020 from Honeymoon director Leigh Janiak. Are You Afraid of the Dark? was just rebooted on Nickelodeon. A feature-film adaptation of Scary Stories to Tell in the Dark directed by André Øvredal did gangbusters at the box office.

Even more hardcore horror directors such as Eli Roth have dabbled in humbler horror with Amblin’s The House With A Clock in Its Walls (2018). And lest we not forget that James Gunn wrote Scooby-Doo (2002) in between Thir13en Ghosts (2001) and the Dawn of the Dead remake (2004) after a stint at Troma.

There also seems to now be an understanding that there can be a gateway to the gateway, if you will, with a trend of animated movies and series aimed at an even younger generation: Monster House (2006); Coraline (2009); ParaNorman (2012); and Frankenweenie (2012). And then there is the successful Hotel Transylvania franchise, currently three films in with a fourth to be released in 2021 and a Disney Channel series in its second season. Netflix even has an original animated series called Super Monsters that is Muppet Babies meets the Universal Monsters.

That’s because the very people who grew up with this pop culture and were inspired by it are now the creators. They are now creating gateway horror for a new generation of horror fans.

Director Chelsea Stardust, who gave us the gory pizza party known as Satanic Panic, cites Goosebumps as a major influence.

“My love of horror actually originates from literature. I read every Goosebumps, Scary Stories to Tell in the Dark, and Bunnicula book I could get my hands on. I read them over and over again until they started to fall apart,” she says. “I was part of the Goosebumps Fan Club, too! My obsession with horror and the macabre had officially started. When my parents saw I could handle those books, they decided to show me the Universal Monster movies and my life was forever changed. I was definitely channeling my love of Goosebumps through Satanic Panic!”

(We should note that Satanic Panic is from a script by author Grady Hendrix who, with books like My Best Friend's Exorcism, is channeling his own gateway horror with throwbacks to ‘80s teen horror pulp.)

Are You Afraid of the Dark? writer/producer BenDavid Grabinski infused both a love and spirit of the original series with its recent reboot.

“Making horror for kids is a lot of fun. Nearly everything I write, direct, or produce is very R-rated, but it was a joy to create something designed for kids who haven't been exposed to a wide range of horror,” he says. “I think horror that's appropriate for kids is very important and I wish there was a lot more of it.”

As for the consumers, the other kids who grew up with those original runs are now the adults who buy the movie tickets and subscribe to the streaming services. To mix some romanticism in with the cynicism, it is also a way for those parents to re-experience these properties with their own. Maybe they go back to the original at some point (and then the stuff that inspired that, fingers crossed), but for this generation, this is their own gateway horror.

The key ingredient to gateway horror is that the properties don’t talk down to their audiences. If anything, they are tailor-made for each generation and don’t treat youthful fears as childish or insignificant. If the horror genre is a window into the nightmares of society, gateway horror is a window into the nightmares of youth at an age before we have to face the big, scary grown-up world. Gateway horror considers kid's fears as both a necessary part of childhood and as serious as society’s fears.

As a child, your world is the only one you know. The things that seem big and scary are the things that are the biggest and scariest in your limited understanding and perspective. It’s a time prior to adulthood where you don’t yet have to face the real horrors or realities of the world. Nostalgia for these things lies with the longing to travel back to a simpler, less scary time where spooky things and simple scares were the scariest things you knew. No coincidence then that in our modern times we’ve seen a resurgence of gateway horror from a previous generation.

And for kids themselves, the appeal is no more complex or complicated than a childlike fascination with a mysterious world they don’t totally understand. Whether it’s our world … or the other side. We were all Carol Anne with the TV in Poltergeist (1982) – we’re drawn to it. In the same sense that we’re curious about the wonders of life, we’re curious about death and the macabre and the paranormal and life’s great mysteries of the unknown. It’s akin to the allure of a haunted house and the fun from dressing up on Halloween and trick-or-treating. Simply, it’s fun to be scared.

After all, “life’s no fun without a good scare.”

What was your gateway horror?

James Wallace is one of the hosts of The Creepshow Show on the FANGORIA Podcast Network and the Director of Events & Partnerships for FANGORIA. He once tried to start a Paranormal Investigators Club in high school to less-than-mild success and a lukewarm reception. When he dies, he would like his ashes to be spread inside The Haunted Mansion at Disney World, which many people have told him is not allowed but he refuses to accept this as fact.