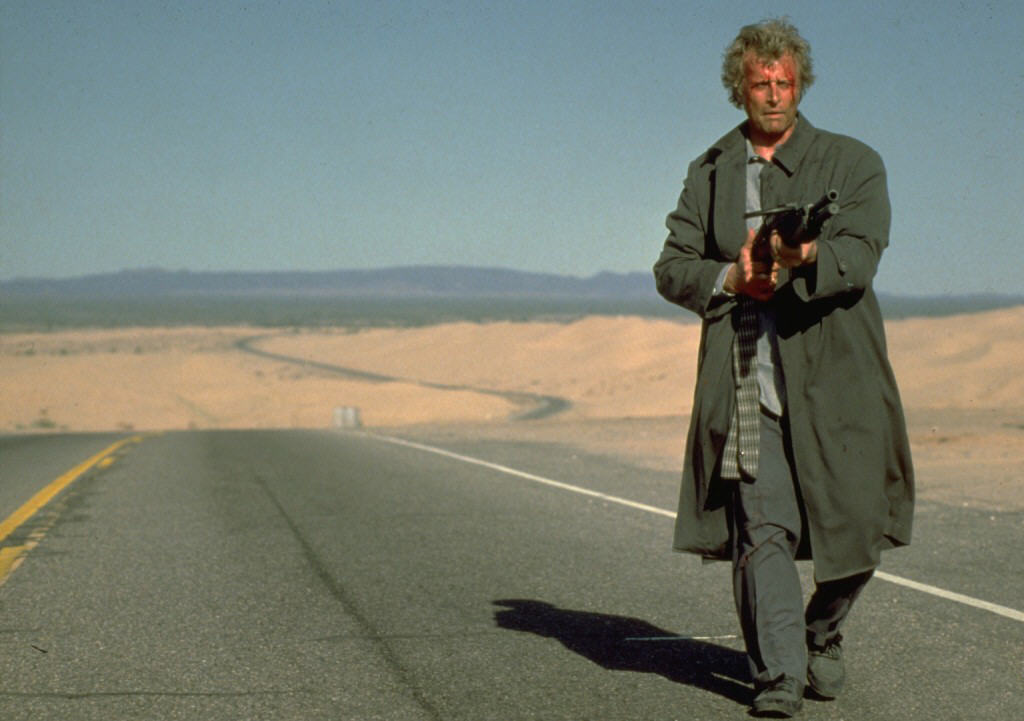 Would you give this guy a ride? Rutger Hauer, ladies and gentlemen. RIP.

ne of the few unique characteristics of a die-hard genre fan is that we’re collectors. Whether it be original theatrical one-sheet posters, a bevy of action figures since, hell, we didn’t have horror action figures growing up, LP soundtracks, masks, etc. -- if something exists fashioned after one of the big, great traditional franchise flicks or from an obscure gem from the ‘80s, we will go after it. This extends to physical media, including Blu-rays. Sure, to the big studios, it’s a dying source of revenue, but to a niche horror-loving audience, and labels such as Scream Factory, Arrow Video, Vinegar Syndrome, and beyond, it’s big-enough business.

Growing up reading FANGORIA magazine, sometimes all it would take is a single still or description from a movie to put me on the obsessive path of seeing whatever that film was. I didn’t care if it probably wasn’t going to be good, it was something none of my friends had seen and hence, I had to be first to find it and show it to them. I only provide this context to explain why several years back, I decided that I had to invest in an all-region Blu-ray player. I did not want any limitations to the films I could get access to! If it came out somewhere in the world, then I wanted to be able to see it.

And so, this led me into the semi-expensive hobby of buying import Blu-rays. In most cases, it’s simply movies I could not get in high def here in the States. In others, it’s films that never got a fair shake in the U.S. market. And then there are those damn movies that, as fans, we can’t help but buy every damn edition that hits the market. (I’m talking to you, fellow collector that has purchased Halloween and The Evil Dead more times than you care to admit.)

Skimming my collection, I wanted to give you, our devoted FANGO readers, a starting point for what I consider some essential import discs. I apologize in advance if I’m setting you on yet another expensive hobby, but … having no limitations to what movies you can buy? It’s worth it.

One of the most requested titles for Blu-ray has to be The Hitcher from 1986, directed by Robert Harmon and scripted by Eric Red. The thriller has the late, great Rutger Hauer as a sadistic hitchhiker stalking C. Thomas Howell and Jennifer Jason Leigh. The movie spawned a 2003 sequel, as well as a 2007 remake from Platinum Dunes. From my naïve understanding, rights issues are holding this one up from a proper U.S. release, something to do with HBO, but thankfully, that’s not the problem in other territories. German label Filmjuwelen has a cool two-disc Blu-Ray/DVD set under the title “DER HIGHWAY KILLER!” The good news? The Blu-ray itself is region-free, meaning it can play in your regular Blu-ray player. The bad news? Although the “extras” bring you to several trailers and a documentary titled “The Hitcher: How Do These Movies Get Made?” there’s a glitch preventing them from playing. However, the movie itself is the draw here and while it’s not a total restoration from the original elements, it is a high-def presentation and a big upgrade from the previous out-of-print, snap-case DVD.

Where to find it? Head to Amazon, scroll all the way down to the bottom and switch to “Germany.” Also, on occasion, DiabolikDVD.com carries it.

About a year ago, I started doing a deep dive into the various interpretations of Dracula, a mild blind spot in my horror filmography. The one I wanted to see the most was Udo Kier’s version of the Count in the Paul Morrissey film produced by Andy Warhol. This disc was readily available from Australian company Cinema Cult – Shock Entertainment, but it suddenly disappeared, at least here in the United States. (There’s currently one up on Amazon for $70 bucks.) So, this one will take a bit of leg work. It’s still on store shelves in Australia, so I asked a friend there to pick this and Flesh for Frankenstein up for me. Did the movie live up to my expectations? YES. Young, beautiful Udo Kier as an ailing vampire who just wants to give up but is dragged by his servant to Italy to feast on a group of sisters that turn out not to be virgins? Highly quotable, fairly bloody, and a great, shocking conclusion reminiscent of George Romero’s Martin, but far more graphic. The film itself also looks great on this disc, and there are some commentary tracks, both on the movie itself and on screen tests by Paul Morrissey; he has somewhat disowned these films, hence the lack of a proper U.S. release. Start reaching out to your international friends to score this one!

Sure, you can currently watch the Japanese indie cult sensation exclusively on Shudder, but if you’re like me, you want the disc! And you want some bonus features! Third Window Films has got you covered. One Cut started out as a low-budget independent feature which managed to gross 1,000 times its budget when released in Japanese theaters; it’s a true indie Cinderella story. And the film itself deserves all the success. What starts out as a traditional zombie movie presented in one 37-minute take morphs into something else at the second act, and eventually culminates in a heartfelt third act, which is all payoff to everything you’ve just seen. The less you know, the better. But stick with it. And what’s cool about this disc is getting a making-of featurette that interviews the key players and shows a bit of behind the scenes, and filmmaker Shinichiro Ueda’s short film Take 8 is included. It’s not a zombie short; it’s a drama depicting a struggling film director making a film with his bride-to-be when her real-life father shows up to play the father role, but it still showcases the unique meta-style later perfected with One Cut. The disc is region-free, so yet again, this will play in your regular U.S. player! It can be found on Amazon UK, DiabolikDVD.com, or direct from Third Window Pictures.

‍Deadly Games is a bizarre, long-lost gem that never got a proper release in the United States. Also known in France as 3615 Code Pere Noel, and in some parts of the world as Game Over, it starts with an overzealous John Rambo-loving kid, running around his house, setting up booby traps while a knock-off of “Eye Of The Tiger” plays. The kid gets left home alone while just outside his complex, a dangerous distraught, disturbed man dressed in a Santa Claus outfit decides to break in. It’s part Home Alone, but a year before that film, and it’s darkly funny and strangely surreal. For those that love holiday horror, it’s definitely a gem worth adding to your annual queue. The disc is tough to come by, but available via Amazon Germany and it’s got a great, extensive interview with writer/director Rene Manzor. This played last year to much praise at FantasticFest; although there currently isn’t a U.S. release, I’m confident it will surface here in some form soon enough. I mean, it’s been 30 years! Better late than never?

‍As a horror fan, the biggest sin has been the handling of the work of directing duo Alexandre Bustillo and Julien Maury. Over a decade ago, they came out of the French Extremist movement with their blistering Christmas-set horror feature Inside (it spawned a never-talked-about remake in 2016). At one point, they were tapped to make the sequel to Rob Zombie’s Halloween before Zombie himself came back into the fold. They explored the origins of Leatherface in their hugely compromised film in 2017. But in between all that, they made a feature called Livid that was immediately snatched up by the Weinsteins, who intended to remake it for American audiences. Their original version was buried on a shelf and never released in the United States, and the proposed remake never happened. So, I picked up the import from Amazon UK. The film itself is pretty darned good. And … familiar. With the rumored promise of a hidden treasure, a young man, the girl he has a crush on, and her boyfriend decide to break into a giant house late at night and steal the worthwhile goods. But what they don’t count on is the little bedridden old lady in the house is actually an ageless vampire. The basic premise and characters are duplicated in the hit Don’t Breathe, but instead of a vampire, it’s a badass blind Stephen Lang. Despite the similarities, this one’s worth seeing, especially if you were blown away by their debut, Inside.

‍ZOMBI: DAWN OF THE DEAD: As we eagerly await the officially sanctioned 4K restorations of Dawn of the Dead and Martin from UK label Second Sight Films, there are a few versions of George Romero’s masterpiece already out there. Several years back, an Italian release came out on disc courtesy of Midnight Factory, presented by acclaimed cult filmmaker Nicolas Winding Refn. It’s four discs with three versions of the movie and a bonus disc of special features, which are sadly not subtitled. And more recently, while on a trip to France, I spotted a new four-disc collectible edition of Zombie from ESC Edition. It’s got a 4K restoration of the European Dario Argento cut, as well as the longer Cannes cut, and it comes with a 152-page booklet and five collectible postcards. But we have yet to get a definitive release of Dawn of the Dead, which hopefully this upcoming Second Sight one will be. Look – this is a classic. I’m just going to buy every version that comes out, and so are you.

‍THE DENTIST 1 & 2: Far from a series that should be considered “classic,” I couldn’t help but marvel at the fact that both movies in Brian Yuzna’s Dentist series had a Blu-ray release in France with new killer cover art. It’s Corbin Bernsen as an insanely jealous and crazed killer dentist from the mind of Stuart Gordon. The set has three discs: one Blu-ray with both films and two DVDs with one film on each disc. The fact that I have The Dentist 1 and The Dentist 2: Brace Yourself in high def is what physical-media collecting is all about! You can get yours from Amazon France.