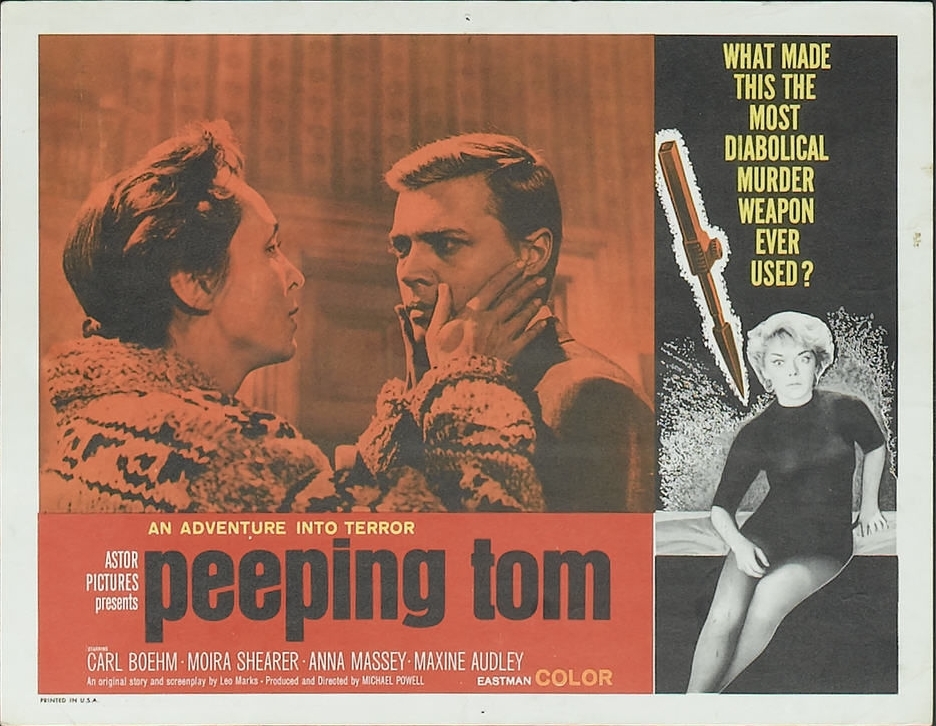 ou can never judge a movie by critical reviews. Throughout horror history, there have been titles that have been critically panned, yet often years or decades later these same titles are heralded as classics of the genre. Some well-known examples are The Shining, Freaks, and Psycho, all of which critically were pulverized upon release, but have since become stalwart examples of horror done right. The Thing and Event Horizon also received a shocking amount of vitriol upon their initial releases but hit well with fans who championed the works and made them canon genre flicks. But sometimes, after an initial critical blow, a film may never recover, no matter how amazing and well-constructed it is.

Since its 1960 release (the same year as Psycho), Peeping Tom has had a turbulent history that includes appalling reviews, censorship issues, theaters pulling the film entirely because of the extreme content, and destroying the reputation and career of director Michael Powell. While cult film fans have always championed the work, it was decades before critics and academics came around to the movie, reevaluating its shocking content as historically important and the film’s intense explorations into the psychology of voyeurism as ahead of its time. Martin Scorsese later heralded Peeping Tom as a masterpiece, and Criterion gave it a fancy, high-brow DVD release. Even with the critical whiplash, Peeping Tom never gained anywhere near the acclaim, notoriety, and accessibility of other similar films from the same time, such as Psycho, Rosemary’s Baby, or The Innocents.

Peeping Tom explores the twisted life of Mark Lewis (played by Carl Boehm), a reclusive cameraman who also spends his time off taking sexy soft-core photos of prostitutes. The audience understands from the start that something is off about Mark, and it is not long until we see him killing women via a knife concealed at the end of his tripod. But most of the actual death scenes occur off-camera, and though the audience knows he is committing these gruesome murders, the actual mechanics of the deaths stay concealed. Mark soon befriends a neighbor who takes a keen interest in him, and Mark, though incredibly awkward around everyone else, finds her charming and is at ease in her company. Yet he knows his compulsion for killing is growing, and it is only a matter of time before she finds out his perverse secret.

It’s easy to see why Peeping Tom caused such a stir upon its initial release, focusing on a serial killer who spends time with back-alley sex workers when he isn’t brutally stabbing actresses. The film feels mean, sleazy, and misogynistic from the start - but that is the point. Peeping Tom, at its core, is a psychological exploration of voyeurism, delving deep into the act of watching and specifically targeting the act of watching through a camera.

It becomes clear in the movie that the camera is not just documenting real life, but creating its own artifice. In one scene, Mark is recording an actress so she can get extra footage for her audition reel. Though calm and composed just before, as soon as the camera rolls, she begins dancing and posing, creating a false sense of what’s real when filtered through a lens. When photographing one of the soft-core actresses, she asks Mark to try not to show any of her bruises as he begins clicking away with the camera. This quick, rather throwaway line delivers a massive emotional hit, letting the viewer perceive in their own minds why the sex worker is covered in contusions. Again, the artifice of her sexuality and pristine body are created by the camera, and the audience is allowed to quickly glance the false reality before to reside in the twisted reality of Mark’s life. But yet, people in the film love to be watched. The actresses love to be photographed and revel in the performative nature of it all.

Peeping Tom also explores how we, as a larger society, love watching other people - be it watching movies, looking at photographs, or spying on our neighbors through our windows. We love watching other people, especially when they don’t realize they are being observed. For Mark, this has become a psychopathic illness resulting in serial killings, but the film makes certain that the viewer can identify with him, somehow understanding our own voyeuristic tendencies and exploiting the fact that many of us perceive human nature and our understanding of the world through media and movies, often more so than our own real-life personal interactions.

I have long wondered how a similar film like Psycho could become genre canon while it took Peeping Tom decades to climb out of cinema jail, damaging the director’s career so much that, even after the film received acclaim, he still spoke very little about it. Of course, Psycho was a stateside production and Peeping Tom a UK one, but it feels like more than that. Though equally psychological and Freudian, Peeping Tom feel less controlled, more dangerous, and more surreal. It also forces viewers to do something that Psycho does not to the same degree: It forces audiences to explore their own fetishistic nature of voyeurism as they are sitting in a theater engaged in the actual act of watching. In this, the film feels sadistic and uncomfortable, yet it is brilliant and incredibly layered, with the pointed self-analytic nature of Peeping Tom making it not only genius but also quite uncomfortable for the audience watching it.

Because of the rocky beginnings, Peeping Tom is a difficult film to find. At the time of this article, it is not streaming on any of the major VOD platforms. The DVD (released by Criterion in 1999) has long been out of print, and used copies now average about $40. There is a Region B Blu-ray available, but that will require a region-free player (an expense that I consider well worth the cost for horror movie completists). Fingers crossed that this cinematic masterpiece gets a U.S. Blu-ray or a snazzy restoration release soon.‍

Rebekah McKendry was FANGORIA’s Director of Marketing for more than a decade and went on to serve as Editor in Chief at Blumhouse Productions for several years. She is currently a professor specializing in horror media at the University of Southern California, as well as an award-winning filmmaker. She is a co-host of Blumhouse’s award-winning Shock Waves podcast and host of FANGORIA’s Nightmare University podcast.She has a doctorate focused in Media Studies/the Horror Genre from Virginia Commonwealth University, an M.A. in Film Studies from City University of New York, and a second M.A. from Virginia Tech in Arts Education. She is the founder of the Stephanie Rothman Fellowship for Female Film Students.