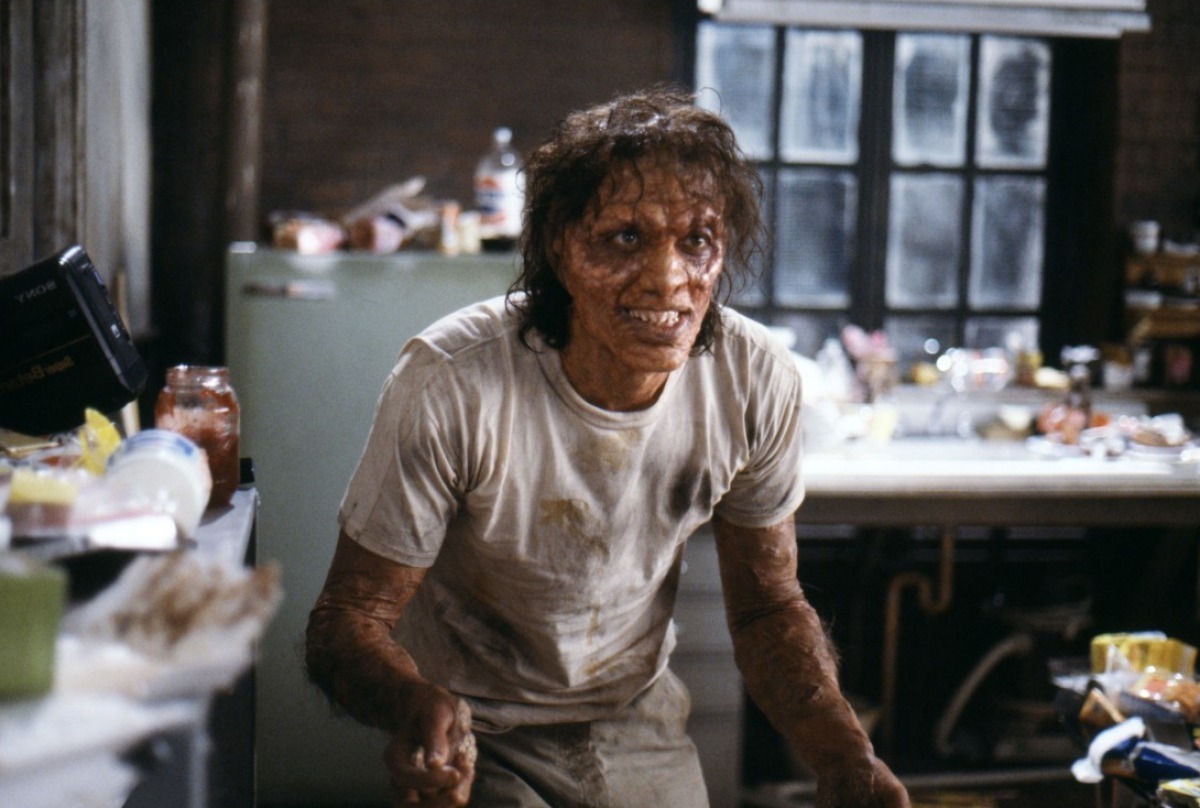 Like 'The Fly' in a lab (and in a box set), here comes FANGORIA with a holiday (or any other time) gift guide.

is the season, as they say! And I’m sure if you’re on this site, then you must know someone in your friend and family circle that loves the horror genre. So, on top of getting them a FANGORIA subscription, naturally, you’re probably wondering what else could you possibly get? Allow me to offer a few suggestions bound to make this holiday season extra festive and extra spooky!

‍
When it comes to quality home-video releases of horror classics, Scream Factory has often led by example by treating genre titles with Criterion-level care. Recently, they’ve pulled out all the stops on a handful of collections that would make perfect gifts this holiday season.

For starters, THE OMEN collection not only collects the original trilogy in the infamous Anti-Christ saga, but also its fourth unrelated sequel The Omen IV: The Awakening and the 2006 practically shot-for-shot remake. Each disc is loaded with hours of new special features, including interviews, audio commentaries, and more. Plus, that killer new box cover art! Just, wow.

And while I’m in awe, let me tell you about their new deluxe package for THE FLY! This features all five movies in the franchise: the original trilogy The Fly, Return of, and Curse of; the celebrated David Cronenberg masterpiece starring Jeff Goldblum and Geena Davis; and its gory sequel The Fly 2, making its Blu-ray debut here. The Cronenberg discs from Fox featured some pretty extensive documentaries on previous releases. Thankfully, that’s all been carted over and a ton of new stuff was created specifically for this release. It’s worth it alone for the new interview with producer Mel Brooks (yes, that Mel Brooks) talking about the remake.

Delving just a tad bit outside the horror genre, you can’t go wrong with the ABBOTT AND COSTELLO COMPLETE UNIVERSAL PICTURES COLLECTION! An epic box set featuring all 28 Universal films with the comedic duo, including their several monster mashes such as Abbott and Costello Meet Frankenstein, Meet the Mummy, Meet Dr. Jekyll and Mr. Hyde, Meet the Killer Boris Karloff. This one actually is perfect for the whole family!

The fine fiends from Arrow Video are also doing the devil’s work when it comes to extensive collector’s edition deluxe packaging. And while you’ve probably already purchased some version of both An American Werewolf in London and Robocop, it’s absolutely worth upgrading to these new Arrow versions.

AN AMERICAN WEREWOLF IN LONDON has now seen three different Blu-ray editions and restoration. Is this one really better than all those previous ones? YES. The movie itself is from a 4K scan, so it has never looked or sounded better. All the excellent special features from previous releases are accounted for, including Paul Davis’ feature-length documentary Beware the Moon. (Davis also provides new commentary on the film itself.) But the thing that put this set over the top for me is filmmaker Daniel Griffith’s new feature-length documentary Mark Of The Beast: The Legacy of the Universal Werewolf, which tracks the entire history of werewolves in movies by filmmakers like John Landis, Joe Dante, and Mick Garris, as well as fans and historians. Quite frankly, I’m tired of really long singular interviews passing as a special feature these days. That’s the type of content I’ll maybe watch once, if even that, and never again. I prefer and love documentaries! This is one I’ll revisit and show my friends. And on top of the doc, there’s a great new segment with John Landis talking about making films in the UK, The Nun director Corin Hardy on his love of the film and much, much more.

The same love and care is given to Paul Verhoeven’s ROBOCOP, a timeless classic that still holds up. Once again, most previous features are carted over, including a legendary 2012 live Q & A panel. But the new stuff is where it’s at! There’s a fun three-way conversation between co-writer Ed Neumeier, filmmakers David Birke (Elle) and Nicolas McCarthy (Orion’s The Prodigy). There is also a new interview with Nancy Allen; a look at the impressive, insane personal collection of Robocop collector Julien Dumont; split-screen look at the TV edits versus the theatrical R-rated lines; and both the unrated director’s cut and the R-rated theatrical in one package. The R-rated hasn’t been available on home video for quite some time, and in retrospect, I find it more disturbing than the over-the-top gore of the unrated version. Great to have it all in one set that’s essential for ROBOCOP fans.

How ‘bout some vinyl for your music-loving friends and family? If you’re looking for cool new and unique music and soundtracks, you need to dip into the catalog of Burning Witches Records. For starters, they’ve got the vinyl release for FANGORIA’s own feature film Satanic Panic, featuring an original score by Wolfmen Of Mars. They’ve also got the soundtracks to Tales of Halloween, Candy Corn, and Imitation Girl. On the original music front, you can’t go wrong with either of Daniel Davies’ records “Events Score” or “Soeurs De Glisse;” Davies is a member of John Carpenter’s band. Anything by the mighty Deadly Avenger is going to make you want to throw a Kaiju party! And there’s plenty more artists to discover such as Cory Killduff, Oh Baby, or Mr. Eff. Best part? You can sample digitally before you buy via their BandCamp page at https://burningwitchesrecords.bandcamp.com/.

If you really want to impress, there’s also the epic BOX OF SOULS set from Mondo and Death Waltz Records. This eight-LP set collects all the scores for the Nightmare on Elm Street franchise in one collection. It’s $250 bucks, but considering you get the full scores for all of the Nightmare films on vinyl, it’s actually quite a deal!

Need a fun horror-themed board game to play? Look no further than MIXTAPE MASSACRE! What started as a Kickstarter project to create the ultimate “slasher” inspired board game evolved into something much more elaborate and fun! It’s the brainchild of Freddie Carlini, Matt Corrado, and Merrijoy Vicente, whom together form the agency Bright Light. After working with several iconic brands on similar projects, they wanted to take their love of all things ‘80s and all things genre and funnel it into a board game, which became Mixtape Massacre.

You can play with up to six players, and each player gets to pick a “slasher” that they can represent in the fictitious town of Tall Oaks, set in the year 1986. It’s up to you to beat your fellow maniacs into various settings to slay victims. But if you come across a fellow killer, you can brawl for the ultimate bragging rights of being the baddest of the bunch! With loads of ‘80s pop-culture references, it’s an absolute blast to play! Visit the official website at: https://mixtapemassacre.com/

There’s nothing wrong with adding a few new books to your shelf. If you’re a franchise fanatic, you can’t go wrong with the new book by Dustin McNeill and Travis Mullins TAKING SHAPE: DEVELOPING HALLOWEEN FROM SCRIPT TO SCREAM. This exhaustive book looks at the many scripts and the development process of every Halloween movie in the franchise! Even if you’re a die-hard fan, you’ll find some new never-before tidbits here. And if you want more, early next year, we’re getting Taking Shape II, which will focus specifically on all of the unmade Halloween sequels!

If you’re looking for recommendations of deep dives and horror gems, Brian Collins has got you covered! On top of contributing to sites such as Bloody-Disgusting, Birth Movies Death, and FANGORIA, Brian also spent five years updating his horror blog, Horror Movie A Day, where, without fail, he would watch and review a horror movie every single day. This book version of HORROR MOVIE A DAY is an update and expansion of what he started on the site. He revisits his reviews from when he initially saw a film, offers new commentary and insight, and culls together an impressive tome of horror movies I guarantee you haven’t seen all of. Even if you have seen the titles he’s talking about, his observations are always a delight to read. This is your go-to horror reference book for this holiday season.

Like many of you, I’ve grown up reading the many contributions to FANGORIA from the esteemed Michael Gingold. And so when it comes to anything horror-related, I know I can trust Michael’s expertise, or in this case … his fandom! If you remember the awesome newspaper ads for movies growing up, Michael has collected all of the best, most memorable ones, and spread them out over the course of three killer coffee table books. Ad Nauseam Volume 1 focuses on the horror of the ‘80s; Ad Nauseam Volume 2 centers on horror of the ‘90s and 2000’s; and Ad Astra spans 20 years worth of sci-fi movie ads! All three are worthwhile additions to your bookshelf!

Got someone that loves both books and horror soundtracks? A great companion piece to any collection would be the book BLOOD ON BLACK WAX by Rue Morgue magazine’s Aaron Lupton and Jeff Szpirglas. It's a soundtrack book like no other. It primarily focuses on soundtrack cover art, whether it be an original classic poster design or a recent Mondo exclusive, juxtaposed with both essays from the authors and interview snippets from legendary composers such as Fabio Frizzi, Christopher Young, and John Carpenter. It’s the perfect book to cozy up to while spinning some horror-themed vinyl!

Last, but certainly not least is THE WORLD OF IT by Alyse Wax, a colleague from the FEARnet days and currently the co-editor-in-chief at Dread Central. I’m a huge fan of movie coffee-table books, often dubbed “The Art of…” which gives a great deal of insight and conceptual artwork that goes into the development process of the film. For The World of IT, Alyse digs deep and interviews the key creatives involved with this new two-part adaptation of Stephen King’s beloved classic, including director/producer duo Andy and Barbara Muschietti. For me, my love of these particular movies is strengthened by my affinity for the characters and world Stephen King created. So if you want to spend a little more time investigating the dark corners of this version of Derry, this book is your guide!