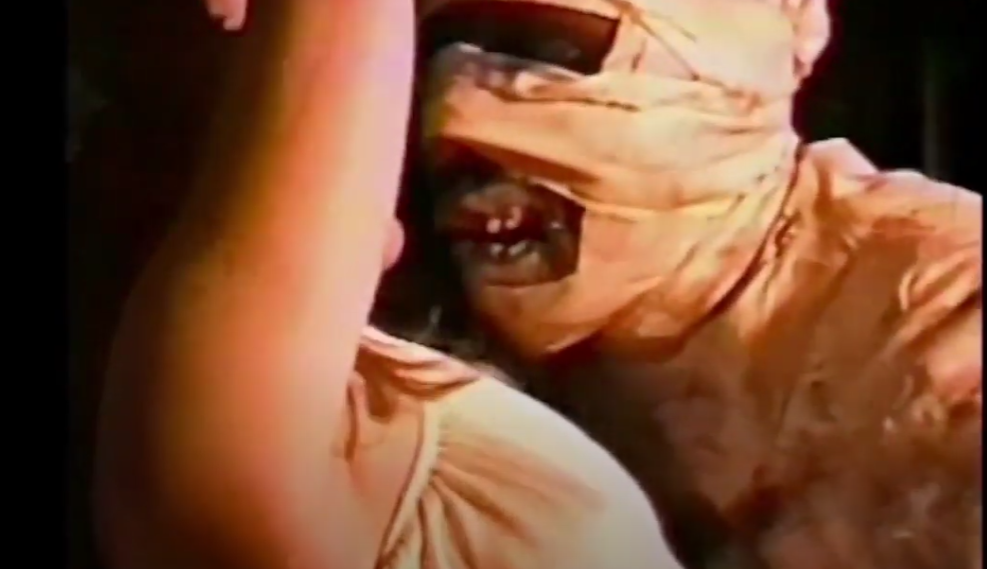 If you’re a fan of shot-on-video horror, and especially if you’ve been a regular on the East Coast genre convention scene since the 1990s, then you’re familiar with the output of W.A.V.E. Productions. Established by New Jersey-based Gary Whitson in 1987, W.A.V.E. has produced more than 400 horror, erotic and fetish videos, many of them scripted and financed by fans—allowing them to satiate their particular and often peculiar obsessions. Now directors Ross Snyder and William Hellfire are exploring the company’s unique history in the documentary Mail Order Murder: The Story of W.A.V.E. Productions, and have given FANGORIA some words and the exclusive first look at the trailer.

Mail Order Murder features interviews with Whitson, a wide assortment of his stars and collaborators, and other horror figures (full disclosure: this writer is one of them). Hellfire himself was part of the W.A.V.E. team for a while, starting when his band Disco Missile contributed a pair of songs to 1995’s Psycho Sisters. After he began making his own movies for distributor E.I. Independent Cinema/Alternative Cinema, “Gary started offering me work, and we made a cannibal fetish film together called Cannibal Doctor,” Hellfire (pictured below with Whitson, W.A.V.E. actress Laura Giglio and Snyder) recalls. “It was a plotless feature about a man preparing a girl to be eaten—measuring her, conditioning, tenderizing, and eventually cooking her under a special heat lamp. It ends with the girl naked and cooked surrounded by fruits and vegetables. We completed the feature in less than eight hours.

“I really didn’t understand the appeal of such films,” he admits. “I mean, to me, cannibal films were the ultraviolent Make Them Die Slowly type, not ‘gently massage her and cover her in fruit while shining a red lamp on her shiny oiled skin’ fetish movies. But a month later, the customer ordered another custom cannibal film called Dinner for Two, and after that I went on to make another six features for W.A.V.E., as well as 20 or more W.A.V.E. knockoffs for the home video market.”

Snyder, a fan of DIY horror who lived in the same NJ area as Hellfire, became curious about W.A.V.E. after renting a few of their titles (including the compilation W.A.V.E.’s Most Gruesome Deaths) at his local video store. “As a longtime lover of homegrown SOV productions, I was curious about the filmmakers behind all this madness, so I mailed away for a W.A.V.E. catalog,” he says. “It was here that I learned about Gary, his propensity for producing custom fan-scripted movies, and his unfathomably copious filmography, which at the time stemmed from only a scant 10 years of filmmaking. It was shortly after this that I first met Gary, [actress] Tina Krause, and the W.A.V.E. gang in person at a Chiller Theatre convention. The W.A.V.E. Productions table was certainly an unforgettable sight to behold: a mind-bending cornucopia of crude VHS box designs, head-scratching video titles, and dense photo albums offering snapshots of scantily clad girls in various stages of peril for purchase. I continued buying W.A.V.E. movies over the years, and I greatly admired the fact that Gary always stayed true to his initial focus and unceremoniously continued undaunted on his cinematic path through nearly three decades.”

He also became a fan of the movies Hellfire was turning out through his own Factory 2000 outfit, and the seed of Mail Order Murder was planted when the two first met years later. “When he invited me to his pad to see his collection of shot-on-video VHS movies,” Hellfire says, “not only did he have a good number of my features, but he had over 60 W.A.V.E. titles. I was like, ‘Why do you have these movies?! Like, this stuff is for weirdos!’ Revisiting W.A.V.E. after all those years, though, I began to see them in a different light.”

“As we started rewatching some of the W.A.V.E. features together,” Snyder says, “we began to rediscover what a truly bizarre, singular, and vastly uncharted cinematic landscape Gary had created over the years. My initial intent was to write a book about W.A.V.E., but Bill convinced me that making a documentary together would be a far better venture. We reached out to Gary for his blessing, and he was kind enough to give us full access to the W.A.V.E. archive. After enlisting the help of fellow filmmaker Brian Darwas [Get My Gun] as cinematographer, we began our journey to locate and interview as many of the actors, collaborators, and familiar faces from the annals of W.A.V.E.’s history as we could find and convince to participate.”

These include frequent W.A.V.E. performers Krause and Pamela Sutch, with whom Hellfire had worked on his own movies, Debbie D., Laura Giglio, Dave Castiglione, Aven Warren and Clancy McCauley. One of the few major W.A.V.E. players who did not take part, Hellfire says, “was Gary’s partner Sal Longo. Sal was such a character and an integral part of the early W.A.V.E. films, so we were dying to get him in the documentary. We tracked him down and called him in hopes that he would be interested in telling his story. We planned on capturing some sort of reunion between Sal and Gary on camera, but it was not meant to be. Sal left W.A.V.E. back in the ’90s and didn’t want to revisit that part of his life. He would barely even talk to me on the phone about his participation in W.A.V.E.”

Mail Order Murder is now close to completion, and its eventual release will bring a part of Hellfire’s movie experience full circle. “Here we are 30 years later,” he says, “and W.A.V.E. is still producing movies, and I’m super-excited to share this piece of New Jersey moviemaking history!”