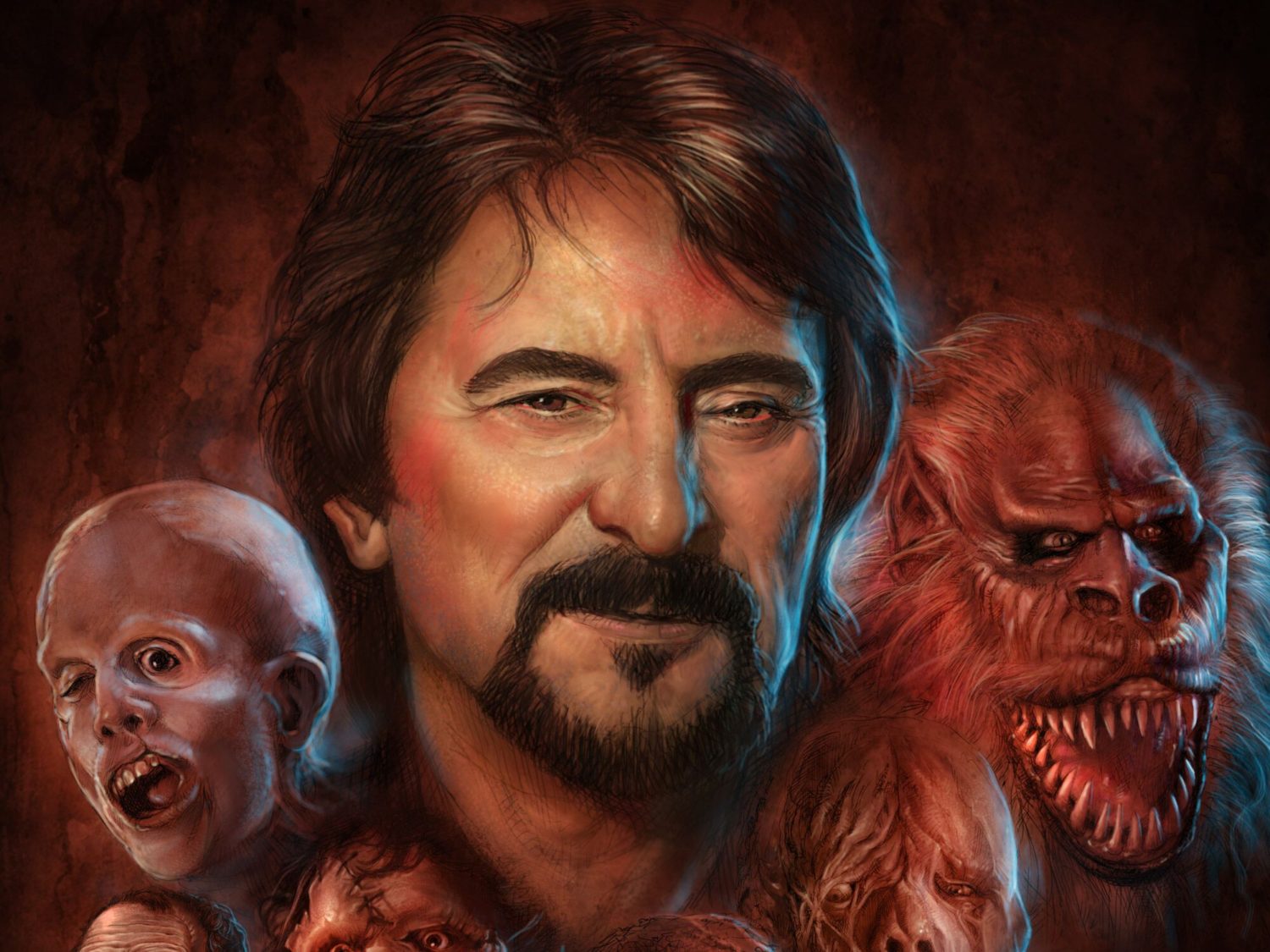 One of the most prolific special effects artists of all time, Tom Savini’s influence on the horror genre has been felt far and wide over the course of five decades now, and Tom shows no signs of slowing down any time soon, even after recently turning 73 years young. Not only did Savini recently direct one of the segments for the first season of the Creepshow anthology series for Shudder, but he also found time to publish two different books in 2019, and now he’s celebrating the release of his documentary, Smoke and Mirrors: The Story of Tom Savini, which hits Shudder today.

For Smoke and Mirrors, Savini entrusted his life story to Jason Cartman Baker, with whom he’s been collaborating in a variety of ways for years now. “Something I’ve learned over time is you either click with people or you don't. One of my best friends, Rob Lucas, was in the first class that came into my school and he became a producer on Smoke and Mirrors. Before him, Taso Stavrakis was my assistant on Friday the 13th, and we worked closely together for years.

“So, I've always had an assistant who becomes something more to me, a true friend. And Jason, he went through my makeup program, and we just hit it off immediately. It was his idea to create this documentary, and we've been working on this for, I think, about five years now. When you see the documentary, sometimes I've got long hair, sometimes I've got short hair. I even look younger during some of the segments, so you can tell a lot of time has gone by with these interviews.”

With documentaries focusing on ‘80s horror (In Search of Darkness, Scream, Queen! My Nightmare on Elm Street) creating massive buzz in 2019, the timing seems great for a look back at Savini’s imprint. But as Savini explained, the genesis for the doc had a somewhat surprising agenda. “Jason heard all these rumors about me being a dick and being abrasive and not very friendly, and by hanging around me, he saw that I wasn’t the guy that most fans thought I was.  It used to be that if you Googled my name, the fourth thing that used to come up was ‘Tom Savini is a dick.’ And that was horrible.”The two worked together, with Savini providing guidance -- and Baker providing pushback. “It was basically him sitting here in my living room with me looking over his shoulder and making suggestions or adding stuff. But we did work in tandem because he really needed to know what my life was all about. There were aspects of my life he couldn’t possibly know unless I guided him, especially when it comes to my experiences in Vietnam. I did want to approve everything that was going into the documentary, because I felt like there were some extraneous things. But he insisted on keeping them in, because he felt like these were things fans would really want to know. I think he did a great job with his (editing) choices.”

For Smoke and Mirrors, Baker and Savini wanted to pull the veil back on the Godfather of Gore’s life for fans in ways they had never experienced before. And despite Savini’s initial reservations as to whether or not the personal aspects of the project would be “too much,” a well-received festival screening opened up Savini’s eyes for just how much fans wanted to know about the legend.

“To me, I thought that maybe it was too personal, because I didn’t know if fans would be interested in who I was beyond my effects work,” Savini explained. “This is very much a biography about  everything I've gone through in my life, even back when I learned about creating misdirections through magic, my first job as Dracula as part of a traveling show, and how I had initially wanted to be an actor before makeup effects came into my life. When we showed it in Montreal at the Montreal Film Festival, I got up on stage afterwards and apologized to the crowd for how much personal stuff was in it, because I didn’t know how they were going to respond to it. But as it turned out, that was the stuff that they really wanted to hear about the most. We just wanted to make sure that this project had a lot of heart to it, so to get that kind of validation meant a lot to me. And to Jason, too.”

With the release of Smoke and Mirrors this week, as well as Savini’s biography and a second book that reflects on his intended vision for his Night of the Living Dead remake, it seems like the universe has aligned itself for a bit of a Savini-ssance, but according to Tom, there weren’t bigger forces at play when it came to how all three of these projects ended up coming out within months of each other. “We had no grand design on how these things would come together, so having two books and a documentary coming out within months of each other was all a coincidence – a fortunate coincidence, though.”

The sudden flurry of activity is fine with Savini, who is clear-eyed about the passage of time. “In my biography, the very first sentence in that book is that I am now in my early seventies, and I intend to live to be about 110, so I better jot some stuff down before it’s too late. We often think that before it's our time to go that someone out there will discover the means for us to live forever, and then we won't have to go, but if it doesn’t happen, I better start chronicling these things before it’s too late.”

His second book, Night of the Living Dead ’90: The Version You’ve Never Seen, scratches an itch the filmmaker has endured for decades. “That was something I wanted to put together because there was so much I had wanted to do with that film, and we just didn’t get to do it. That was a rough time for me, personally. I was going through a divorce right in the middle of production, I had to deal with budget cuts. (The book) features around 600 different storyboards that I had created before starting the film, and a lot of those are things that were sacrificed along the way. I am proud of the Night of the Living Dead we were able to make, but there’s a much different version of the movie that I wanted fans to have the opportunity to see now, after all these years.”

While it might seem that Savini is feeling retrospective these days, with the documentary and his latest two book projects, that couldn’t be any further from the truth. These days, he’s keenly focused on the future by helping to build up future generations of special makeup effects artists through his exhaustive FX school program.

“I wish my makeup school had existed when I was growing up so I would have had a place to go and spend 16 months and learn how to do all this stuff like my students can. (Starting out), I was inspired by Dick Smith, and by Rick Baker, and I know what it feels like to get gifts of knowledge from them. I would call Dick Smith and two hours later, we would still be on the phone and he'd still be telling me how to do stuff. And then, he would Xerox it all and send it to me. For a long time, Dick was the only one that would share his secrets, which was very inspiring to me and that's why I wrote the Grande Illusions books, to share information with aspiring artists. That’s what it’s all about.”

Inside or outside a classroom, Savini is reminded of his imprint on the genre and its community every day. “There have been several times when a young kid has come up to me and told me that they were going to kill themselves, but something I said in an interview or somewhere else inspired them and gave them a springboard into special makeup effects instead of doing something terrible to themselves. I honestly don't know what to say when that happens. It's chilling. But at the same time, I look at these kids, and I get up and I hug them and I encourage them. Teaching new generations is a big part of my legacy.”

Smoke & Mirrors: The Story of Tom Savini is now streaming on Shudder.

After falling in love with horror at an early age, Heather Wixson has been both a journalist and a proponent of independent horror cinema since 2007. Wixson is the managing editor for DailyDead.com, has contributed to FANGORIA magazine, and was a featured writer at DreadCentral.com and the managing editor for TerrorTube.com. Wixson finished her first book, Monster Squad: Celebrating the Artists Behind Cinema's Most Memorable Creatures, in 2017, and is working on her second book project on special-effects artists.