Ring in the holidays with Neo-Giallo, The Sublime Gothic, The Dark of the Matinee, Kaiju and more!

This December, ARROW is keeping it festive and creepy with a full lineup of horrific goods to carry us through the holiday season, including gothic horror and a kaiju collection. Programs include The Sublime Gothic, The Dark of the Matinee (spilling blood in theater aisles), Shawscope Volume 1, Kaiju Collection, Brian Lonano Collection Volume 2 and 12 Slays of Christmas, serving up a little more blood splatter than the usual holiday fare. Kicking off this wild, festive December lineup is The Last Matinee, Maximiliano "Maxi" Contenti's stylish neo-giallo love letter premieres on ARROW December 1st. Take a look at the official synopsis:

A cold, wet day. A declining cinema. All you want is to get out of the rain and watch a good film. But who else is in there, hiding in the dark? When Ana takes over projection duties from her ailing father, she doesn’t expect anything worse than a broken reel or a burned-out bulb. But there’s a sadistic killer in the auditorium, and soon blood is running in the aisles as he starts picking off the audience members one by one. Can Ana and the few remaining survivors escape the murderous madman, or will they be victims of his matinee massacre?

As an early holiday treat, ARROW is giving us an exclusive sneak peek at a clip from The Last Matinee. As the killer arrives at the theater, we are reminded... "Don't take candy from strangers." The rain, the black leather glove, the music, the neon light bouncing off the wet pavement, the slow-motion gumballs cascading down the steps, and the Argento Opera poster tucked away in the background— there's a lot to love on in this quick clip and we imagine lots more to love on in Contenti's feature. Check out the clip:

And here is ARROW's full December lineup with premiere dates: 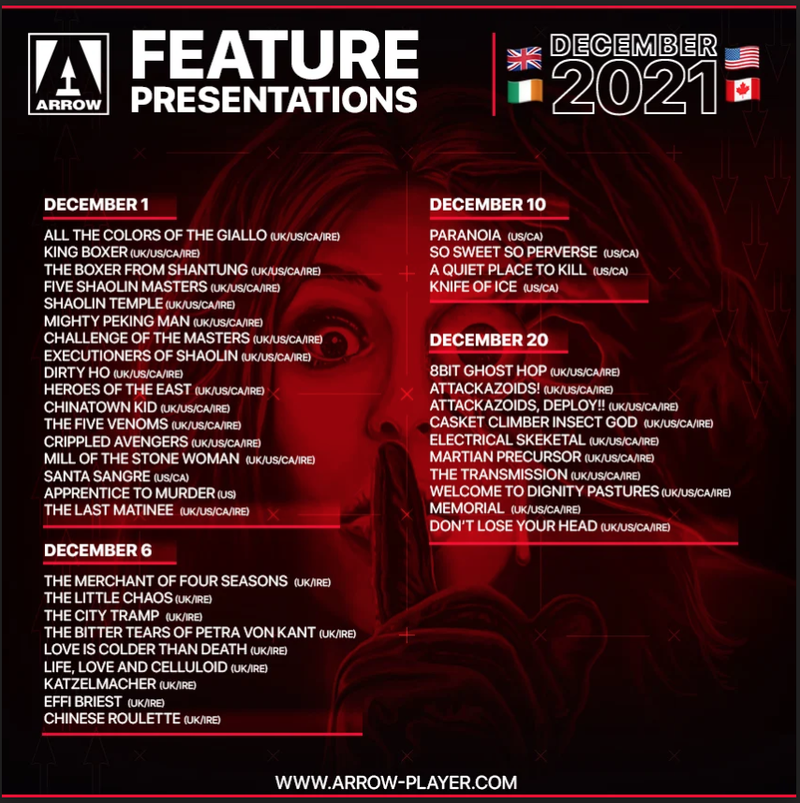 If you're not already a subscriber, ARROW has a 30-day free trial available.