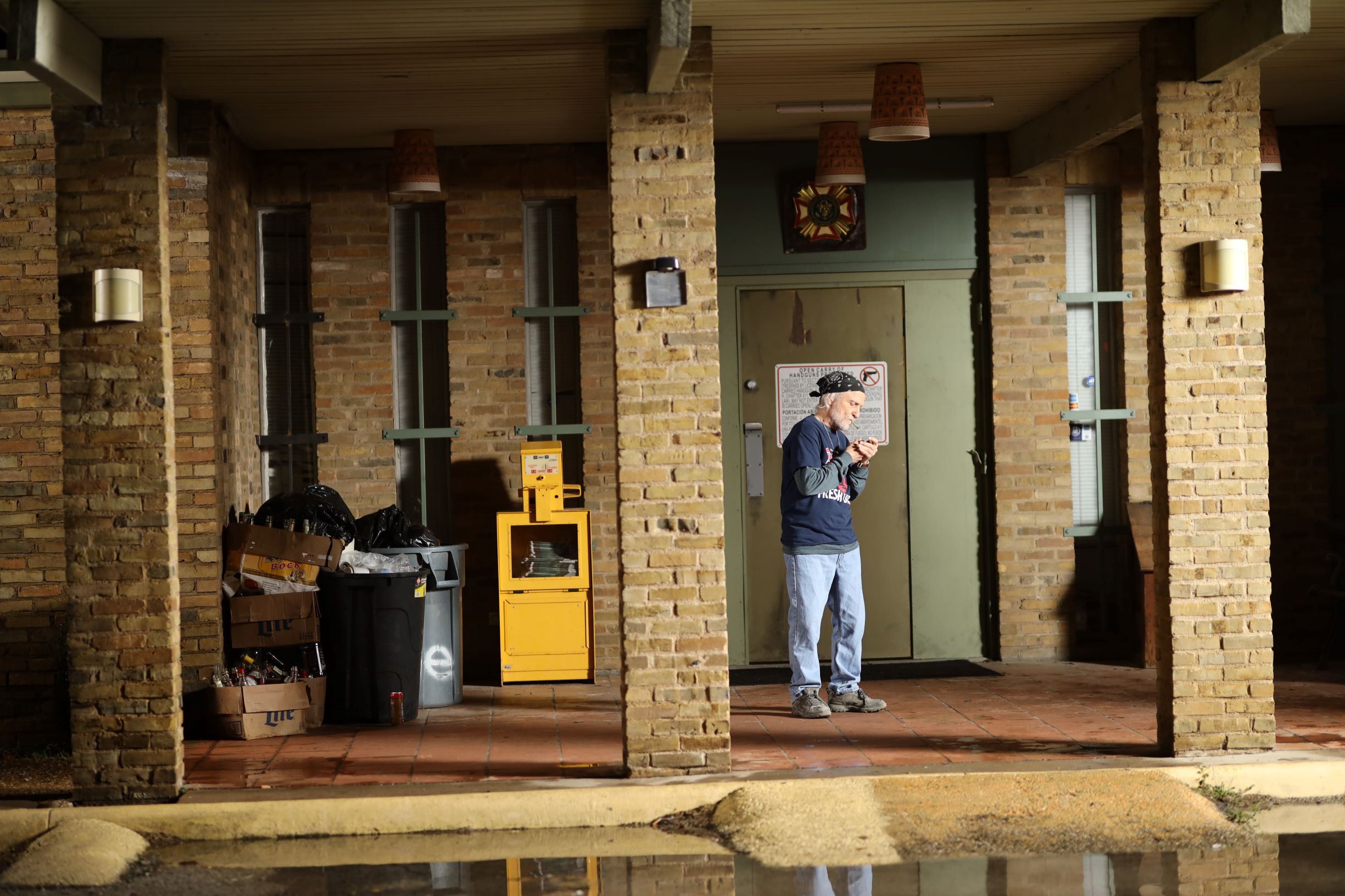 David Patrick Kelly finally sinks his teeth into a horror movie with his role in 'VFW.' (Photo: Eliana Pires)

avid Patrick Kelly has played so many bad-ass characters in so many bad-ass flicks, from his big-screen debut in Walter Hill’s The Warriors to the first two John Wicks, it’s surprising when the actor points out that VFW is his first true horror movie. But so it is that the FANGORIA production, which blasts into theaters and onto VOD/digital platforms on Feb. 14 from RLJE Films, is his maiden voyage into hardcore fright fare.

There’s plenty of bloodshed in director Joe Begos’ homage to Assault on Precinct 13, scripted by Max Brallier and Matthew McArdle and set almost entirely in and around the titular post for veterans of foreign wars. Kelly plays Doug MacCarthy, one of a group of former military men who hang out in the joint owned by Fred (Stephen Lang), which comes under attack by an endless wave of drug-crazed thugs pursuing Lizard (Sierra McCormick), a girl who has stolen a huge stash of an opioid called “Hype.” Over the course of one colorful, splattery night [with heavy-duty makeup effects by Josh and Sierra Russell], Kelly and Lang battle as part of a heavily experienced ensemble that includes William Sadler, Martin Kove, Fred Williamson, and George Wendt. Kelly granted this interview following VFW’s New York premiere late last October at the Brooklyn Horror Film Festival.

‍FANGORIA: How would you describe Doug McCarthy and his role in the story?‍

DAVID PATRICK KELLY: He’s an old soldier who’s longing for peace. You speak to soldiers, and the last thing they want is war because they’ve been there, you know? My father was a WWII veteran and Bronze Star recipient, and we lived with his PTSD —which was not very pronounced, but the people of his generation drank a lot. So I brought that knowledge and my upbringing in the ’50s with my father, and my brother in Vietnam, and I tried to honor their experience, and how some of those people really suffer with PTSD, and the consolation they take from being with people who’ve been through it with them. I play a Vietnam-era character, and when my cousin was over there, he would send back boxes of what we now call medical marijuana; you could just do it through the mail then. So memories of that also play into Doug — the fact that the soldiers over there were very much ahead of their time in terms of the consoling factors of medical marijuana — and the conversation about it that I have with Stephen’s character, who’s very old-school and doesn’t want marijuana in his place.

It’s that ’60s sensibility that I’m very well-acquainted with. I’ve never been a drug user myself, but I was around during the era, and my first show was Hair way back when in Detroit where I grew up, and Meat Loaf and I were in that. So, the culture of the ’60s that I came up through and became a professional actor in when I was a teenager helped provide the background for Doug.‍

FANGORIA: Had you ever worked with any of your veteran co-stars before?‍

KELLY: William Sadler and I did a show about the Beatles [Lennon] way back in 1982. It was not long after John Lennon’s passing, and I played young Lennon with Bill as their manager and many other characters. [Note: In 1974, Kelly also appeared in off-Broadway’s Sgt. Pepper’s Lonely Hearts Club Band on the Road, a precursor to 1978’s Sgt. Pepper’s Lonely Hearts Club Band movie.] We played music together, too, and I share with both Bill and Stephen Lang a respect and love for the theater. We all have done a lot of our favorite work on stage and continue to do so. I actually came on board VFW because of Stephen; I didn’t know Bill was in it. I’d known Stephen for a number of years in New York City, and though we’d never worked together before, we respected each other’s résumés a lot.

My favorite part of the movie was just being with those guys —Stephen and Bill and Fred Williamson, and Tom [Williamson, as younger soldier Shawn] and George Wendt. The camaraderie we had is rare, and it was so much fun. We had a wonderful script to begin with, and then we improvised together so easily. Of course, the action and the situation are strong, but the unique part of VFW is the relationship between those guys and them defending Sierra’s character.

‍FANGORIA: Was there anything significant that you added to the film in terms of improv?

KELLY: A lot of the dialogue between myself and George Wendt. George is fantastic; I’ve always been a fan of his, and I appreciated the fact that he’s from the Chicago Second City school. Improvisation is their calling card, so to be with George was like being in the major leagues! The dialogue we have about the nurse and getting medical weed and all that was largely improvised. I really enjoyed that part.

But my favorite line was written in the script, and I told Joe that it’s true poetry. It’s in the scene where Doug is standing outside looking at the stars, and he says, “Those guys don’t know what they’re missing. This darkness, it’s perfect. It’s peace.” In a violent movie like this, my character longing for peace is my favorite moment, and Joe did a beautiful job of framing it.

‍FANGORIA: Was it fun to play amidst all the blood and makeup effects?‍

KELLY: I was into it. We had a wonderful crew on that who really were experts and deserve a lot of credit. They were so cheery, and it’s kind of gallows humor to be around all that stuff, so we had a lot of laughs. It’s really just made out of things that you have at home; in fact, my daughter is 10 and she was just making homemade special effects for Halloween. It’s always a treat, and I love the circus aspect of show business, where you can pull off an effect like that and have an emotional impact on the audience.

‍FANGORIA: How was the experience of shooting the movie pretty much entirely on one set?‍

KELLY: Well, we did a few externals at different places, but being on that location and having it be an authentic place really helped. The people who ran that actual VFW post in Texas were delightful. That was one of my favorite aspects, having real VFW posters up and real veterans there advising and telling us great stories — instant research, you know? As I said, so many of us were stage actors, so one set was just fine for us, finding the place you were going to be and utilizing that, and exploiting all the opportunities that one set had. You can take advantage of things a lot more than if you’re moving among different locations.‍

FANGORIA: Was doing a true horror film a new experience for you?‍

KELLY: Yeah, since I’ve only done one or two other things that could even be considered in that territory. I did a movie back in the ’80s called Dreamscape, which was in fact on the cover of FANGORIA magazine! They looked it up for me and found the old cover. I was very proud of that, but I’ve never done a straight-up horror movie before, and I pride myself in having covered a lot of genres. I’ve done domestic stories, and a scene in Clint Eastwood’s Flags of Our Fathers where I played Harry Truman, detective movies — one called Hammett with Wim Wenders, which is a meta detective movie because it’s about Dashiell Hammett — and street-action policers such as 48 HRS. I like working on big studio lots and in VFW posts in Texas; it has been a real thrill ride, so to finally add a pure horror film to the list is exciting, and I’m honored to do so.

‍FANGORIA: How was Joe Begos to work with as a director?‍

KELLY: Joe’s so well-planned, he’s so confident. I’ve said before that he’s the speed-metal Howard Hawks. I wish they had footage of Joe explaining what’s going to happen because he’ll tell you the whole movie in about 30 seconds. Actually, I guess he’s more like The Ramones; I was part of the CBGB scene back in the ’70s, so I saw the original Ramones play, and they were famous for doing 10 songs in under 10 minutes! Joe’s like that when he’s explaining the scenes to you; he knows all the camera angles; he knows all the characters and where they’re gonna come in. In the midst of that speed and that energy, he’s completely calm, too, and open to tweaking stuff and doing something a different way. We did that many times, but it didn’t slow us down; we got it done surprisingly fast. Joe’s truly masterful, and I can’t wait for the next time working with him.‍

FANGORIA: Are there any plans for you to team up again?‍