Exclusive: David Dastmalchian On The Triumphant Return Of COUNT CROWLEY 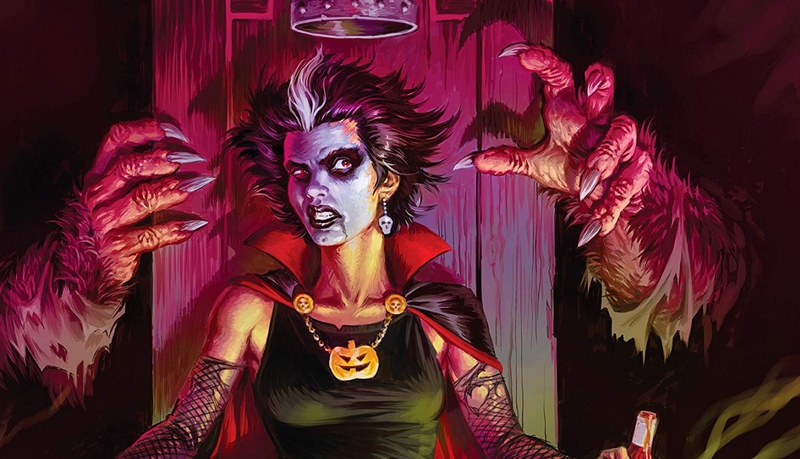 Friend of Fango, actor, comic-creator, David Dastmalchian has announced his comic book Count Crowley is returning with more issues and we could not be more excited! The Hollywood Reporter broke the news yesterday afternoon, a week ahead of The Suicide Squad release. Dastmalchian portrays Polka-Dot-Man in the upcoming movie, and according to The Hollywood Reporter, spent some of his downtime on set penning part of the upcoming Count Crowley storylines. The series originally debuted in 2019 with four issues, and Dastmalchian is excited to further explore the world of Crowley, “There were a lot of new elements we didn’t get to play with before with Vol. 1, including locations, certain kinds of monsters."

The series centers on Jerri Bartman, a TV journalist on the rise, who has to return to her Midwest hometown and work at the local station. What would be a dream job for most of us, hosting late-night creature features, is a humiliating demotion for Jerri— but there's more to the job than meets the eye. Jerri's got big shoes to fill, her missing predecessor was not merely a midnight monster movie host, but also a monster hunter. The official synopsis says it best, "It's 1983 and the outlook for humanity is getting . . . gnarly and their only hope is an alcoholic, acerbic horror host from Missouri."

Dastmalchian is on set for an upcoming project, but he took some time to chat with FANGORIA about the Count Crowley resurrection.

The fan response to Jerri and her journey into becoming Count Crowley has been the greatest gift I’ve ever received as a storyteller. Fans of horror (both classic and contemporary) have been so supportive of this comic and Lukas Ketner’s art makes the frights, emotions and fun really explode off the page. Jerri is flawed, feisty, deeply human and yet extraordinary - just like so many of the women I am inspired by on a daily basis in my life. I can’t wait to share with everyone the next phase of the story. There is going to be so much flesh-tearing, heart-breaking, blood-spattering fun in Volume 2 that I think the issues will need to come with a poncho for the splatter and some Kleenex for the tears…

His lifelong love for horror hosts is evident, something he wrote a very poignant, personal piece on for FANGORIA Vol. 2 Issue #11. Count Crowley isn't the only horror host created by Dastmalchian. He's also the creator of Dr. Fearless, a horror host of his own making, which we got to see in action during the 2021 Fangoria Chainsaw Awards. We can't wait to see what further adventures await Count Crowley. Catch up on all four issues with Count Crowley: Reluctant Midnight Monster Hunter and get your ponchos ready for the blood-splattering fun that awaits us in Volume 2.

Be sure to check out David Dastmalchian as Polka Dot Man in The Suicide Squad, in theaters and on HBO Max Aug 6. In the meantime, you can watch him channel his inner horror host below.