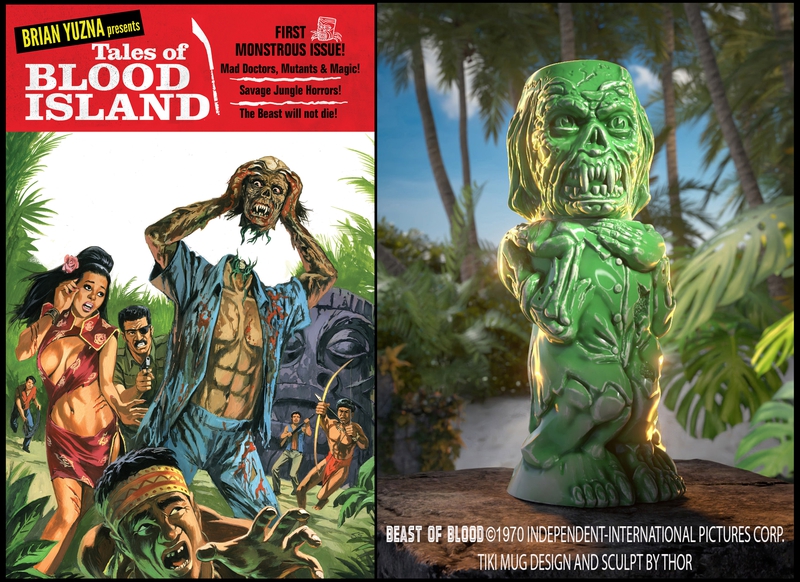 Brian Yuzna, the legendary producer behind Re-Animator, From Beyond and Dagon, is collaborating on a serialized comic book and accompanying “Tiki-style” monster mug line called Brian Yuzna Presents Tales of Blood Island. A Kickstarter campaign has just launched to bring the comics and mugs to gruesome life, both of which draw inspiration from the old Filipino Blood Island exploitation movie series.

FANGORIA.com has some exclusive cover art from the comics below, as well as the scoop from Yuzna and company. Both these colorful tie-ins will serve as a precursor to a cinematic Blood Island remake, based on a script by writers David Sehring and former FANGORIA scribe Mark Cerulli, to be produced by Yuzna and Drive-In Sanity Films. 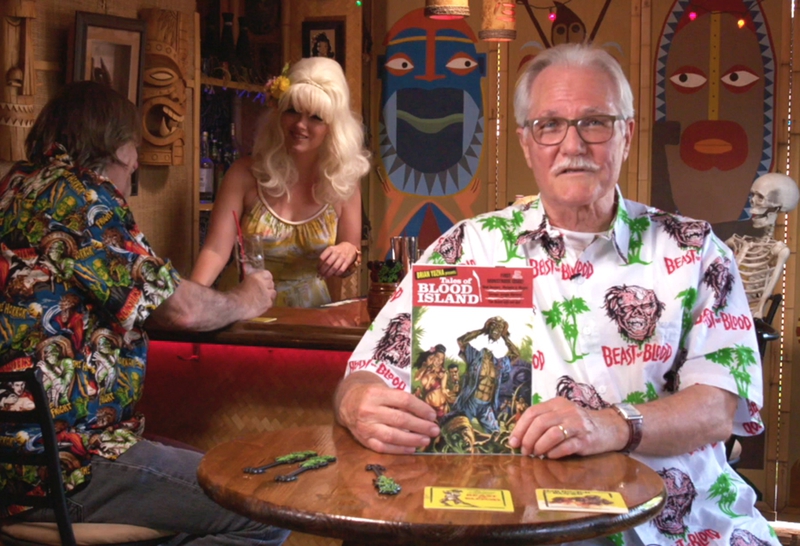 “I’ve always been intrigued by weird tales of zombies, monsters, mutants and mad doctors,” says the Philippines-born Yuzna. “When David Sehring, formerly of AMC and the Monsters HD cable networks, approached me to become involved with the planned reboot of the Filipino Blood Island creature features, I suggested we get a comic book produced as a prelude. Artist Stephen Sistilli’s work screamed ‘Action!’… and I was hooked. I hope horror fans and Tiki fans will be too. From body horror to undying beasts, Tales of Blood Island will take you on a trip to a lot of stranger things in paradise!” 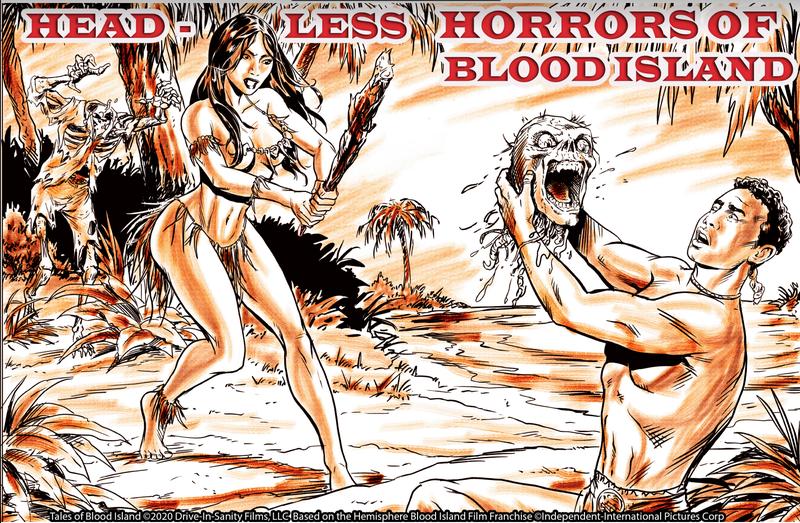 “I grew up a monster, drive-in and Tiki kid in Columbus, Ohio during the 1960s and ’70s,” says Sehring. “I was weaned on creature features at my local drive-in and on late-night TV where I first discovered the Blood Island films and their exploitation formula of the three Bs: blood, breasts and beasts. The films made quite an impression on me as a wide-eyed kid who hadn’t seen much nudity, sex and gore at the movies in Columbus." 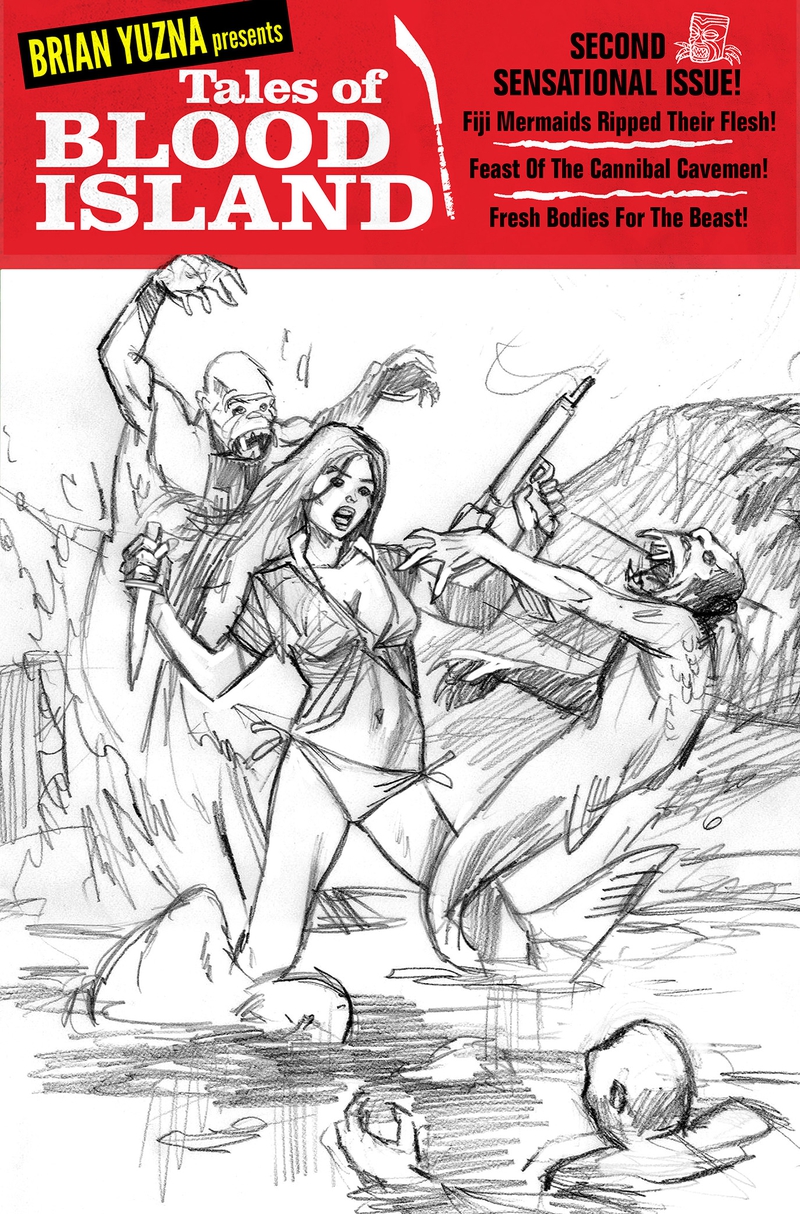 “I also enjoyed a taste of the exotic in Ohio with the food, drink and fun at the iconic mid-century Tiki supper club, The Kahiki,” he continues. “Obviously, the Blood Island films were a huge influence on me and, of course, inspired this unique comic book and Tiki mug tie-in campaign. I am lucky to have assembled a terrific team of talented artists, writers, former colleagues, producer Sam Sherman [who worked on the marketing of the Blood Island movies back in the day] and Yuzna. If you like horror and a taste of the exotic, pledge if you can for some cool Tiki swag and help resurrect the mean green Filipino zombie, the Beast of Blood!”

Fango’s exclusives include Sistilli’s issue #2 variant cover and concept/preproduction art by Ron Randal. According to Sehring, the comic book is a “movie series in the making” with storyboard styling from Sistilli and coloring and lettering from Dexter Weeks. The duo previously worked on another Tiki-themed book, Arcana Comics’ Koni Waves. The first issue of Tales of Blood Island will be 36-pages in full color, with three more issues expected to fill out the series. Readers can indulge in the beverages of their choice with the Tiki-style mugs derived from characters and creatures found in the original movies and new comics. The Beast of Blood, the undying, green-blooded zombie, is the mug line’s first Tiki Monster. It was sculpted by Tiki-fantasy artist Tom “Thor” Thordarson, a veteran of Walt Disney Imagineering, Universal Studios, Tiki Farm and other theme park and design companies. The mugs will be produced in association with Bauer Pottery. Additional color glazes and “blood splatter” editions will be made available to Kickstarter patrons of the Blood Island campaign if it reaches funding goals. 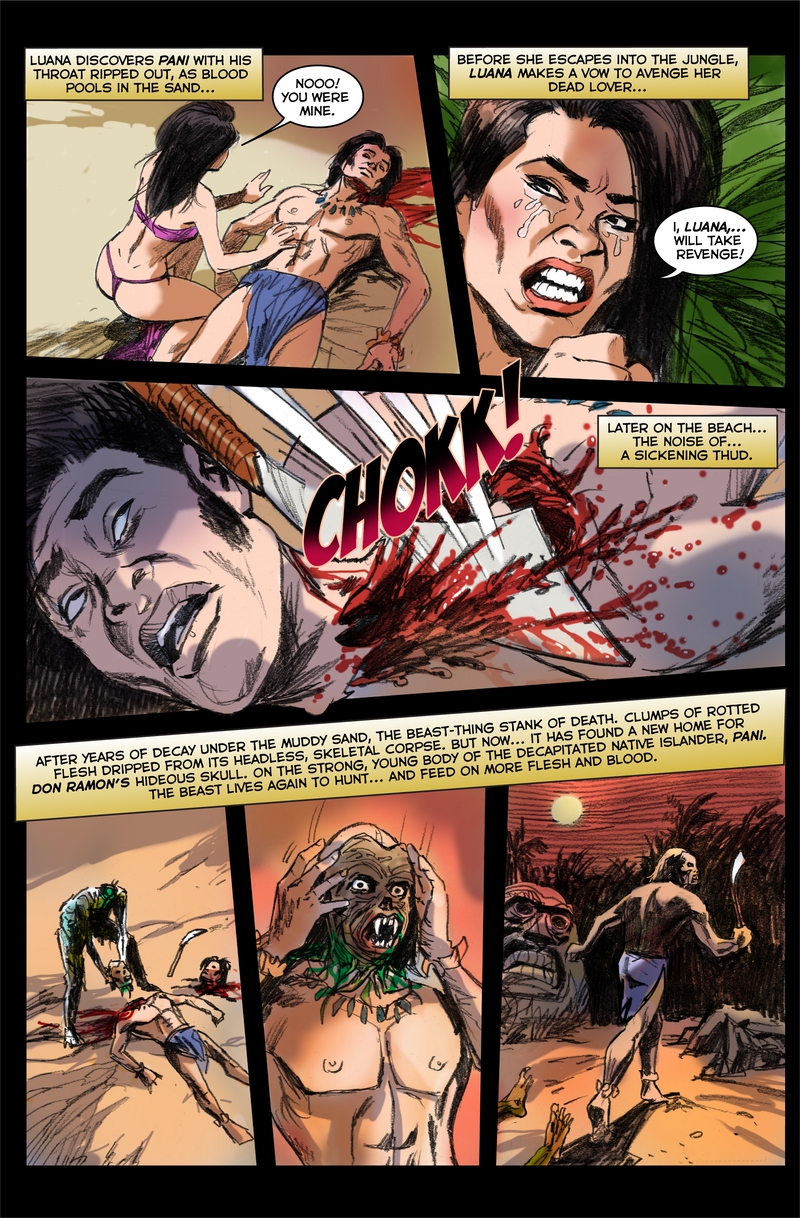 Hemisphere’s Blood Island movies were directed in the Philippines by Gerardo de Leon and Eddie Romero in the 1960s and 1970s. The comics take place during the Vietnam War era, somewhere in the South Seas, on a mysterious, primitive island filled with a multitude of monsters and mutants. There, a soldier-of-fortune and an ex-war buddy team up for a top-secret mission to find and exterminate the murderous war criminal, Dr. Akira Lorca. The mad scientist experiments with evolution and a jungle plant serum derived from man-eating trees to create a hideous, head-hunting, body-swapping beast that terrorizes the island population by feasting on and stealing their blood and flesh. If all this has whetted your appetite, be sure to visit this link for the Kickstarter campaign.