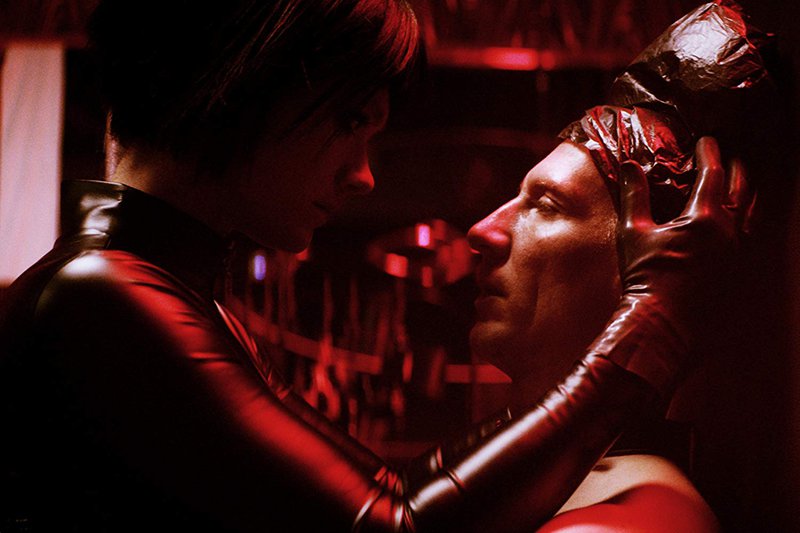 Bathed in a serene blue palette through the first half of the film, Juha is a picture of cool calm without contentment. His world is one of order and coldness, from his meticulously organized clothing to his extensive aseptic techniques in the surgery ward of the hospital where he works. Behind the controlled exterior, Juha is a shell of his former self, grappling with grief from an arm's length. Behind closed doors, he masturbates, using his dead wife's clothing and perfume as props essential to his climax. Actor Pekka Strang flaunts incredible range, inspiring heartbreak and joy without uttering a syllable. Cinematographer Pietari Peltola works with the director to present the father as a segmented human, framed in mirrors and sectioned glass. He's numb to the world, but far from uptight: when his now-teenage daughter decides to get a tongue piercing, he doesn't fight it. In fact, he offers to bring Elli to the tattoo parlor for the procedure. It's at that spot, a ground zero for body modification and self-expression (indeed, the neon glow of a butterfly metamorphosing from blue to white in the parlor window hammers the point home) that Juha tastes and savors the unaccustomed flavor of surrender.

Thrown into sharp contrast is Mona: she may be unorthodox, but she is ultimately a healer of the flesh and the spirit. When she's not getting her boots licked by slaves, the young brunette is a chiropractor by day. In a vanilla parallel to her nighttime lifestyle, she inflicts pain on her patients while re-aligning their spines and aiding in physical therapy. To the detached melodies of crackling vertebrae and grunts of discomfort, she promises that they will be healed soon. Her palette is fitting; she's in stark reds and blacks whenever she is professionally helping others mend, be it through domming or her medical practice. When at home, she is clothed in neutrals; both of her jobs are part of her identity as a helper, and she switches from one to another with the ease of cracking a whip. That said, the biggest difference between her and her newest client is her comfort with these facets in her life. In one of her few interactions with the parlor piercing artist (Iiris Anttila), she responds to an inquiry about finding "normal" work with a gentle, "Darling, I don't like ordinary stuff." Through Kosonen's intensely restrained performance, her character is dominating without that aspect of her personality being problematized.

The director isn't trying to subvert or spoof the romance genre, but he's certainly aware of its conventions. The rom-com subgenre is typified with the conventional associations: warmth with likability, coldness with characters which we can't empathize with. Valkeapää's story complicates that contrast with character exchanges that are typified by bluntness, in a province that leaves no space for nuance. It's a raw, brutal world out there. Juha's curt exchanges with nearly everyone he meets reflects an unsentimental world, but even that chill intensifies within the plot. Juha and Elli's interactions become increasingly strained as he tries to hide his sessions with Mona, as does his professional standing at the hospital where he works. Despite the near-callous nature of everyone's conversations, the interactions vibrate with intense emotion for everyone involved.

In a wild rebuff of the meet-cute, Juha wanders into Mona's dungeon, and she doesn't take kindly to it – dogs don't trespass. She overpowers him, knocks the grieving widower to the floor, and proceeds to strangle him without blinking twice. During the process, the dominatrix steps on his thumb with her stiletto heel, piercing the nail with a staccato sting. It is here that Juha, filmed intimately close, awakens from his stony-eyed slumber. He quickly realizes that, through suffocation, he can visualize his late wife. He returns to her dungeon, again and again, always chasing the sensation with his new mistress in black. The journey that Mona takes him on plays around in the rom-com sandbox but with an effortless perversity that displays both a mastery of the romance genre and, perhaps, a disdain for its idealism.

When Mona takes on Juha as a client, she asserts upfront that an exchange of power will occur. She'll asphyxiate him as requested, but first, he will fully relinquish control to her. He strips down. He kneels. He crawls. He licks her boots. None of it does anything for him particularly, it's a means towards getting a bag over his head for a precious few moments, allowing him to see his beloved as he slips into unconsciousness. For the dominatrix, she is then able to take on what author Chris M. Lyon calls a "leading type" role, with Juha as her submissive, or "supportive type" counterpart. In his book Leading and Supportive Love, Lyon goes on to explain the structure:

‍"Here's a point to consider: The L-type is often responsible to make the final determinations based on each partner's needs, wants, boundaries, and enjoyment. Also, the L-type feels a need to receive caring, attention, and service from their S-type (Supportive type) partner. Consequently, the nature of this relationship would prompt and require the L-type to be absolutely and heavily influenced by their S-type partner. Quite often the L/S types consider their partner to be the single most influential person in their lives. The ultimate answer is they both have control."

For all of his fussing and squirming, Juha comes to realize that he is a through-and-through supportive type (to use Lyon's terminology). An attempt at a "regular" date with a vanilla woman ends in disaster; she gets turned off by his requests for her to strangle him and wear a specific perfume, and he goes home sans orgasm and full of shame. For Juha, any other sort of relationship is unnatural. Again, Lyon explains that this willful yielding in exchange for a sublime experience is not the self-devaluation that many assume and pity it to be.

‍"They are able to enjoy freedom from obligation or self-conscious restraints. S-types are free just to be themselves and to feel pleasure in the liberating experience while they have all of their loved ones' attention focused on them. They don't have to do anything they absolutely don't want to do, making this the ultimate form of control. This is power."

‍Mona and Juha's arrangement is not inherently unhealthy (at first), though a poorly realized dom/sub or L/S-type relationship can become unhealthy. Without spoiling the second and third acts, it's safe to observe that Valkeapää explores the harsh realities of relationships when each places trust in a partner who is as human and flawed as anyone else. But he takes pains to keep it seated in realism, disproving the notion that any single kind of relationship (like a BDSM-laced one) holds a monopoly on toxic behavior. When the harnesses and safe words are stripped away, the problems that infest the pair's accord are ones that are easily found in vanilla ones. Cis-hetero couples who love missionary still fall into the traps of poor boundaries, projecting and unrealistic expectations. As with everything, communication and knowing oneself is the key in order to serve each other according to our greatest strengths.

With his fourth feature film, Valkeapää burrows deep into the core of the human condition and the need for self-actualization by any means necessary. Including sexual elements while avoiding fetishization enables Dogs Don't Wear Pants to assert itself as what it is: an alternative gaze upon one man's painful journey from spiritual paralysis to self-awakening and the emotional release that comes with it. If the final sequence doesn't make you smile, perhaps you haven't been awakened yet.

‍* Yes, there are sexual fantasies and spanking in Secretary, but let's not pretend that the movie is anywhere near 50 Shades of Grey or 9 1/2 Weeks.