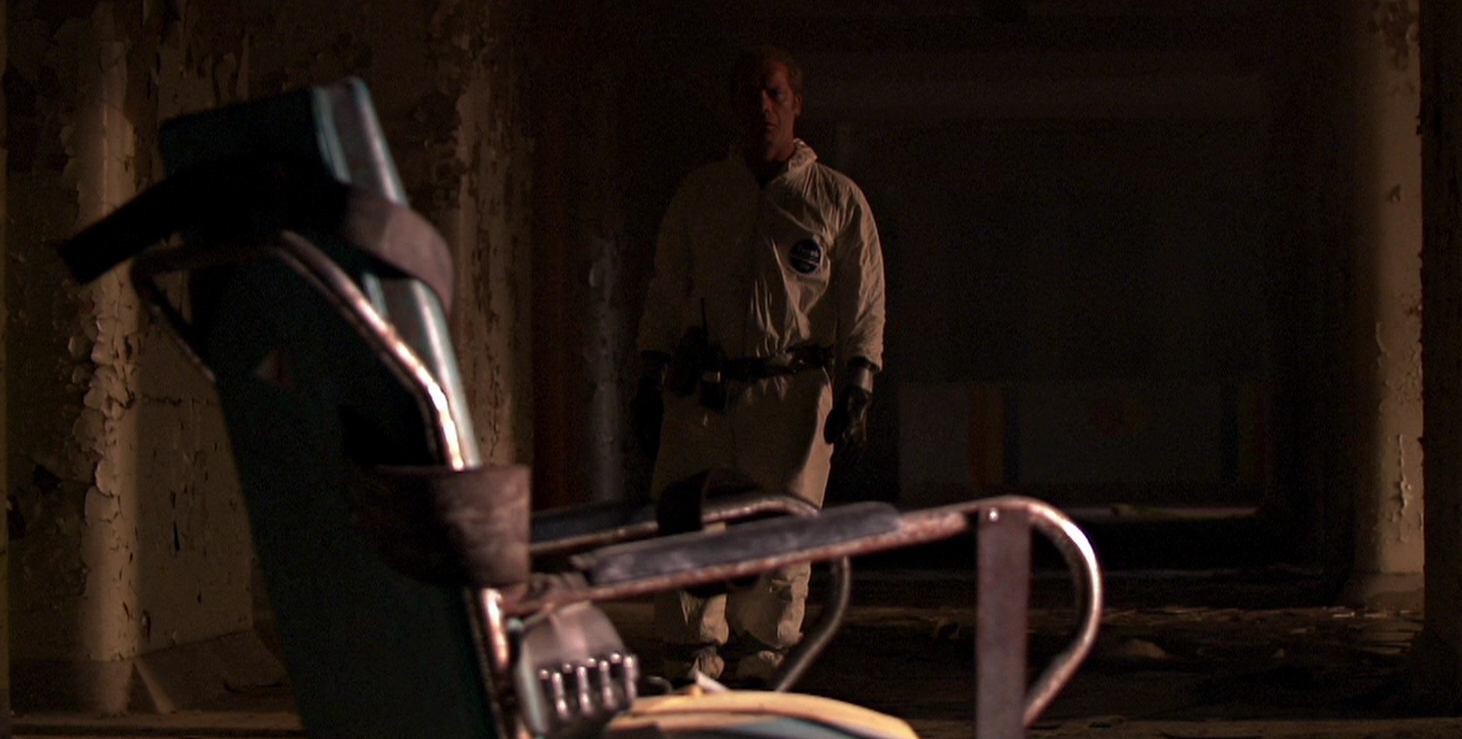 little under 20 years ago, a film helped redefine how we literally view horror cinema.

Narratively, Danny Boyle’s 28 Days Later (2003) wasn’t wholly original, essentially cramming the arc of George Romero’s original Living Dead trilogy into one two-hour chiller. Cillian Murphy awakens from a coma to discover the world has been ravaged beyond recognition, thanks to activists accidentally unleashing a “Rage” virus that transforms its infected into galloping, bloodthirsty ghouls, hellbent on annihilating any healthy human in their path. It’s a nightmarish transmutation of the zombie film, brought to life by a stacked cast (Brendan Gleeson, Naomie Harris,Christopher Eccleston) and an early script from eccentric genre prince Alex Garland (Sunshine, Annihilation).

Had 28 Days Later been shot like any other flesh-eater flick, it’d probably be a footnote, at best, in Boyle’s illustrious career, as well as the horror cinema canon. Instead of celluloid, Boyle opted to utilize an emerging digital technology to lens his post-apocalyptic nightmare, enlisting cinematographer Anthony Dod Mantle (who’d go on to become the auteur’s regular director of photography) and a legion of Canon XL-1 cameras that were just a notch above consumer grade. This resulted in a fractured, hazy look that lent those early morning scenes of Murphy wandering through a deserted London, hollering for help, an immediacy that film just couldn’t. It took even the most astute audience members’ eyes a minute to adjust to this pixelated reverie, but soon after, it became clear we were witnessing a revolution in progress: the next leap forward in how movies were going to be made on the biggest stage imaginable.

To be fair, 28 Days Later wasn’t the first major motion picture to utilize the digital medium, as Steven Soderbergh had been fiddling with the XL-1 on Full Frontal (2002). A year before that, Michael Mann – who would go on to become digital’s Renoir via a decade of crime epics spanning from Collateral (2004) to Blackhat (2015)* – mixed starkly captured training footage into the intro of his boxing biopic, Ali (2001), generating a near hallucinatory effect. Boyle’s critical and commercial hit only now seems like the logical conclusion to these earlier experiments, as he simply applied the tech to a commercially viable narrative, and voila, a new beast slouched toward Hollywood to be born.

Amidst these modern masters, a miniscule movie made in Massachusetts for roughly a million dollars premiered at the Fantasia Film Festival to fairly positive reviews, only to be dumped by short-lived distributor USA Films** into a handful of theaters a month later. Session 9 (2001) found rom-com carpenter Brad Anderson (Next Stop Wonderland) taking a Sony CineAlta HDW-F900 into an abandoned mental institution, and then emerging with one of our most existentially alarming features. His movie is a master class in both resourcefulness and tech-forward craftsmanship, as Session 9 pushed the medium forward only to often be lost in the conversation due to USA not really knowing how to push it for a wider theatrical audience.

In fact, many (including this writer) would discover Anderson’s film on DVD at their local video store, transforming their living rooms into haunted caves not too unlike the ones being explored by the central asbestos abatement crew. While any movie finding its audience is always a positive, it’s tough not to lament just how much more textured Anderson’s often ambiently lit frames would’ve looked, blown up on 35mm*** and projected onto the silver screen. Ditto the impeccable sound design, which immerses the viewer in a still dampness, and leaves you wondering if the puddles formed by constantly dripping water are suddenly going to be splashed by the footsteps of an ominous soldier of impending doom. Session 9 is as much a dexterous sensory experience as it is an impeccable horror narrative, oppressively portentous and leaving you craving escape for the entirety of its creeping 90-minute run time.

Essentially, Session 9 is a workplace scare show, where a crew of blue-collar Bostonians – led by company partners Phil (David Caruso) and Gordon (Peter Mullan) – underbid their corporate competitors to clean out Danvers Mental Hospital, a hulking specter of a health facility that, from an aerial view, resembles a giant vampire bat. Promising to be in and out in one week, Phil and Gordon bring a motley collection to help them de-pollute this former hospital, including failed, paranormally curious lawyer Mike (Stephen Gevedon, who co-wrote the picture with Anderson); cocky white trash lothario, Hank (Josh Lucas); and mulleted nyctophobic high school dropout, Jeff (Brendan Sexton III). Needless to say, these men don’t inspire a lot of confidence that they’ll collect the $10K bonus promised by their employer should the job be finished by the following Monday.

To be frank, Session 9 wouldn’t exist if it wasn't for Danvers. A New England native, Anderson was fixated on the idea of shooting a feature inside the abandoned institution and bounced the idea off of Gevedon (who’d starred in the filmmaker’s early college works). With the help of a few “urban spelunkers,” the duo sneaked onsite and had the experts illustrate Danvers’ history in vivid detail, an experience that’s replicated for the audience as Phil and Gordon are led through the decrepit paradise of madness by a state contractor (Paul Guilfoyle).

It became clear to the writing duo that there was viable pain contained in Danvers’ walls, and they looked to exploit that sense of buried trauma as a means to craft a bucolic tale of overwhelming angst. They even incorporated the building’s past into the stories relayed by an increasingly obsessed Mike, as Gevedon pens himself an opportunity to really flex his performative muscles as the group’s brooding soothsayer. That horrifying oral recreation of an early ‘80s Satanic Panic case, involving rape, incest and the consumption of aborted fetuses? Totally inspired by documents that were just strewn about in Danvers’ hallways, as if waiting to be read. Just as the failed legal student opens up old wounds by listening to the titular tapes of a multiple personality case being prompted to reveal her heinous crimes, Anderson and Gevedon allowed the ghosts who reside in Danvers’ walls to haunt their art.

Shooting Session 9 digitally arose just as much (if not more) from a practical perspective as it did as an aesthetic approach. Anderson only had a 22-day schedule and wanted to lens the movie in a down-and-dirty fashion. Once cinematographer Uta Briesewitz (who’d shot Wonderland for the director) arrived at Danvers, the location again did most of the heavy lifting. Utilizing prowling, Kubrick-like tracking shots, specifically timed to catch the lighting in different parts of the building (depending on where the sun was positioned), Briesewitz simply let the natural light guide her decisions. The result is gorgeous and naturalistic, as shafts beam through windows in the background, lending the mostly daytime set shocker a moody, unnerving quality. As it often does, necessity birthed another utterly unique film experience, with even the production design being provided by the discarded sickbay.

“Hello, Gordon…” There are many joys to be had watching (and, perhaps to a greater extent, re-watching) Session 9, yet the finest pleasure is attempting to decipher whether or not Danvers is supposed to be possessed.The overwhelming evidence points toward “no”; it’s a haunted house movie with zero ghosts. Instead, we’re faced with an almost mundane panic that makes up the majority of the movie’s consistently maintained level of despair. The team’s fabric is slowly undone by tiny cuts, as Gordon frets about his crumbling company, this job quite possibly being he and Phil’s last together as partners.

In turn, Phil can’t help but sense the cracks forming in his friend’s composure; an increasing worry that culminates in his colleague confessing to striking his wife in anger. Mike sneaks away and submerges himself in the multiple personalities of Mary Hobbs (distressingly voiced by Jurian Hughes) to perhaps distract himself from the fact that his perceived potential is wasting away on menial labor. All the while, Hank peacocks about Phil, goading him into a fight because the boss’ lady left him for the cocky working-class asshole long ago. The walls are closing in on these sweaty, HazMat-suited men, infecting them like the asbestos they’re attempting to eradicate from the snake pit’s walls, lodging itself in their souls just as a tiny fiber lodged itself into a cancer patient’s lungs long ago.

Yet it’s also not totally out of bounds to wonder if something – an insidious force beyond human comprehension – took hold of Gordon’s mind from the very first moment he stepped foot on Danvers’ property. A voice croaks from the building’s depths: Satan sitting on your shoulder and calling Himself “Simon” (just as he had with poor Ms. Hobbs), sensing that there’s someone hurting among these masculine laborers. All it would take is a little chiseling away at whatever remains of Gordon’s sanity, causing the foreman to snap and annihilate his family, just for getting a little boiling water spilled on his leg. Of course, the fact that Anderson and Gevedon based Gordon’s crimes on a real-life Beantown murderer**** does a lot to mitigate any supernatural elements we may think exist in the film’s story. Still, it’s tough not to be chilled to the bone as that final tape plays, with Mary telling the tale of when she needed Simon’s help to “be strong,” and the awful contents aligning with Gordon’s brutal decimation of his crew.

After Session 9, Brad Anderson never made another romantic comedy. His features: namely the pitch black, body-warping Christian Bale guilt parable, The Machinist (2004), and the Hitchcockian train thriller, Transsiberian (2008), subsequently affirmed his position as a genre stalwart. For the small screen, he helmed installments in some all-time great television programs (The Wire, Boardwalk Empire).

However, it’s tough to ever imagine Anderson making a movie that’s as iconic (at least to an intensely devoted cult) as his trip to Danvers. With Session 9, the director helped visually remold cinema, while simultaneously producing a single-location nightmare that ranks with The Shining (1980) in terms of pure, perturbed intensity. It’s a movie that imprints upon a viewer’s psyche for the rest of their days, acting as a reminder that we are all vulnerable to evil and insanity, if we simply let our guard down and allow run-of-the-mill anxieties to get the best of us.

*Mann’s John Dillinger man-hunt movie, Public Enemies (2009), might still be the most daring usage of digital to date, as the legendarily bullish director unleashed an arsenal of CineAltas to try and bring the Depression Era bank robber’s final days to life.

**Whose biggest title in the company’s three years of existence (before being merged, along with Universal Focus and Good Machine, into Focus Features) would be Steven Soderbergh’s Academy Award-winning drug-trade opus, Traffic (2002).

***A recent celluloid screening in Austin, Texas, revealed what a revelation Session 9 is when viewed in a theater, owning a cold, tangible coarseness that even the best Blu-ray transfer can’t come close to replicating.

****Gevedon has said in interviews that the real-world criminal was Richard Rosenthal, an insurance executive in Massachusetts. Rosenthal strangled and then dissected his wife’s dead corpse, all because she burnt the ziti.‍

Jacob Knight is a film writer and operator of Vulcan Video, one of the last great cinema archives in America. You can follow him on Twitter (@JacobQKnight), where he will extol the virtues of everything from silent horror to Swimfan.