Continuing to Explore the Great Unseen Horror-Comedy Series, 'Stalked by My Doctor' 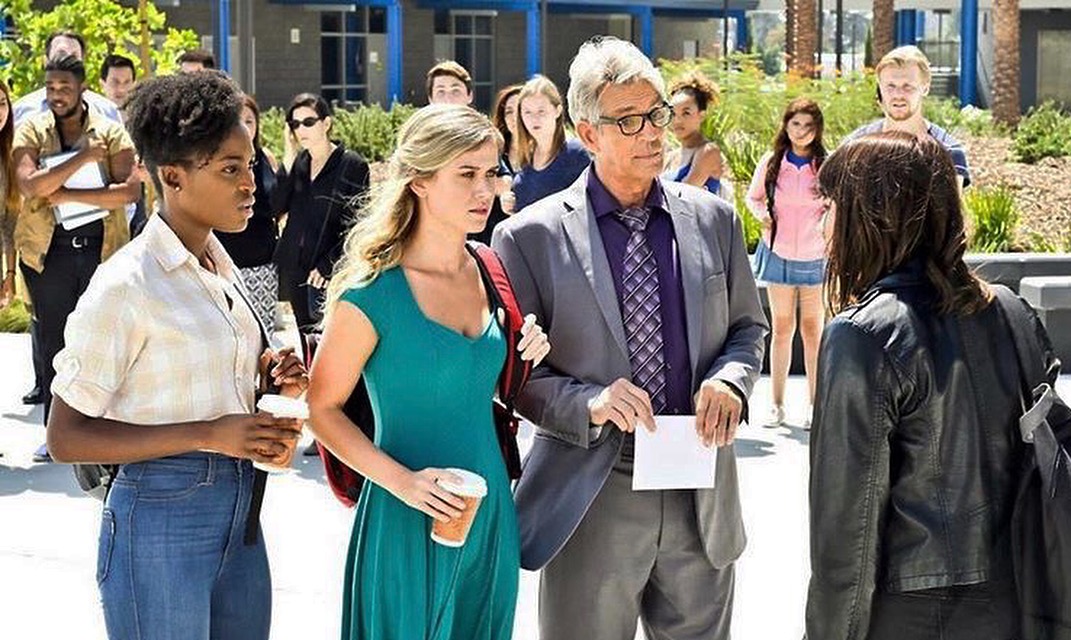 Continuing to Explore the Great Unseen Horror-Comedy Series, 'Stalked by My Doctor'

ave I told you how amazing Stalked by my Doctor is? (Editor's note: Read all about it.)

The deliriously deranged Lifetime movie series is truly one of today’s great unsung horror franchises, featuring Eric Roberts in an inspired turn as Dr. Beck, an insane cardiologist with a bad habit of thinking his female patients are in love with him and taking that obsession to increasingly deadly — and often hilarious — extremes. Series creator Doug Campbell achieved what very few filmmakers can: crafting a movie that’s sincerely insincere, a tongue-in-cheek horror/comedy that’s at once subtle in its employment of satirical elements and bombastic in being unafraid to go balls-to-the-wall when the script calls for it. It’s a rare series in that it accomplishes what few horror comedies are capable of: creating a sense of genuine dread and unease (any woman watching the movies — and more than a few men — will recognize in Dr. Beck the ur creep), and then deflating that with perfectly timed bombast (most infamously, a spooky moment of Beck responding poorly to rejection is followed immediately by his beating up a pile of trash while screaming “I’m a doctor!” in an increasingly hysterical manner). If Stalked by my Doctor and Stalked by my Doctor: The Return were made-for-TV gold, though, they were only laying the groundwork for the series to really find its footing in its third entry, Stalked by My Doctor: Patient’s Revenge.

If he were to retire from filmmaking tomorrow, nothing would stand as a greater magnum opus in Campbell’s career than Patient’s Revenge (which could justly be subtitled “This Time, She’s Goth”). Perhaps no other horror-comedy of the past two decades has so quietly yet so expertly woven together so many disparate elements into one joyous whole. Everything that worked about the first two films is back, only more polished. Roberts is at the top of his game, having lost none of the twisted joie de vivre that made Beck such a compelling character in the first place. Campbell has doubled down on the sensationalism, though, for a film that’s near-perfect in its dedication to its own madness.

Apparently retconning the events of Return, Dr. Beck is found not guilty of his crimes in a perfunctory opening sequence, much to the chagrin of Sophie (a returning Brianna Chomer). Deciding to get while the getting’s good, Beck accepts a cushy teaching job at an out-of-town university, where his knowledge of the human heart quickly makes him the toast of the faculty and allows him to quickly bury all those nasty kidnapping/attempted murder/sex slavery charges. Even more to Beck’s delight, this time he’s the object of someone else’s obsession: popular girl Melissa (Anna Marie Dobbins), a brilliant med student whose aptitude in the classroom is equaled only by her apparent all-consuming lust for Beck.

Lots of guys like Beck would bristle at not being the dominant partner in a relationship, but he knows when the dark gods of the universe have thrown him a bone. Beck soon finds himself working for the first time to actively sublimate his darker tendencies while contemplating the idea he may finally have found his one — a suspicion that’s all but confirmed when Melissa shows herself ready to beat the ever-loving shit out of anyone who crosses him. That includes Sophie, who in tried-and-true ‘90s revenge-thriller fashion, has given herself a goth makeover and enrolled in Beck’s university intent on doing everything she can to make his life a living hell. As the catfights, attempted murders and conspiracies pile up, we move toward a climax that aims to give M. Night Shyamalan a run for his money in the number of twists one movie can have.

The brilliance of Patient’s Revenge is in Campbell’s being unafraid to throw everything at the wall and then let it stick beneath the glue of his own bold vision. While the plot synopsis may make this seem like a relatively average Lifetime thriller, it’s in the execution of these ideas that the movie sets itself apart. Notably, Campbell introduces the character of “Laid Back Beck” (also Roberts), a Hawaiian shirt-clad manifestation of Beck’s withered conscience that appears to him throughout the film to remind him that he’s a seriously fucked-up dude and really needs to stay away from women. Not only does the dual role give the movie a twisted sort of Dr. Jekyll/Mr. Hyde vibe, it also gives us double the Eric Roberts, and there’s great fun to be had not only from watching him bicker with himself onscreen but in remembering what a legitimately fine actor he can be. Where the movie really shines, though, is in its musical number.

As Beck and Melissa contemplate taking their relationship to the next level, the movie abruptly comes to a halt and we move into a full-blown Fred Astaire-style musical sequence that finds the pair dancing across a nighttime cityscape, giving lyrical voice to their inner monologues. It’s so unexpected that first-time viewers will be agape in a “is this really happening” sort of way before the sheer, delusional magic of what’s happening takes over. In the process, Campbell achieves what may be one of the greatest single moments in horror-comedy history. For all the excellence of the film’s over-the-top climax, it’s in the musical number that Patient’s Revenge demonstrates itself to be a film of rare distinction.

Similarly to Return, Revenge ends in a way that could have brought a satisfying conclusion to the series. The people wanted more Beck, though, and in 2019 we got the latest — and hopefully not last — entry, A Sleepwalker’s Nightmare. Unfortunately, Doug Campbell doesn’t return to the director’s chair for this installment, handing the reins to series newcomer Jeff Hare, and the change shows. For as enjoyable as Nightmare is, it represents a definite tonal shift, though those fans who wished it dipped its toes more into horror territory will be pleased. As the presence of scream queen (and FANGO fam) Felissa Rose indicates, this entry is much more concerned with realizing the darker aspects of the franchise and Beck’s character. After his escape in Revenge, Beck finds himself on the run from the law, murdering a somnologist with a fear of social media in the film’s opening moments so he can assume his identity and settle into a cushy job at a sleep clinic.

This sets up what’s probably the ickiest plot yet in the series, as Beck finds himself in the care of a young woman suffering from sexsomnia — the phenomenon of people who engage in compulsive sexual activity while in deep REM sleep. The setup places the filmmakers into a catch-22: Beck has always been sleazy, but he’s never been an outright rapist. The result is a script constantly trying to have its cake and eat it, too: Beck is intrigued by the idea, but with the aid of a returning Laid Back Beck, he realizes he can’t quite bring himself to stoop to those levels. So, he begins a campaign of subtle psychological manipulation in the girl’s waking moments so that when she does proposition him in her sleep, there will be genuine desire there… kinda… sorta. Yeaaaah.

Sleepwalker is the least comedic and most horror-oriented of the series, exploring warped psychosexual territory and featuring much more on-screen violence than in previous entries; it’s not much of a spoiler to say that Felissa Rose’s sleep clinic employee Pamela does not meet a pleasant end when she begins suspecting  Beck of inappropriate behavior. While the series still maintains a basic tone of glib dark comedy, the operative word here is dark, and a fair amount of the humor is of the cringe-inducing “oh no they didn’t” variety. While wanting to do something new and daring is always appreciated, it certainly moves the series subtly away from what made it great to begin with — although an over-the-top Beck-vs.-mother-and-daughter climax does a lot to rein in the seedier elements that have come before and end the movie on a high note.

As of this writing, there are no apparent plans for a fifth entry, which is a damn shame. Nightmare ends with the perfect sequel hook, and at 63, Roberts still has plenty of juice left in him for at least a few more of these cinematic masterpieces. God and the course of coronavirus willing, we’ll soon have more of these cinematic gems in our watching queue; in the meantime, take advantage of the quarantine and seek out the first four. You just may discover it’s your new favorite horror-comedy series.

Preston Fassel is an award-winning author and journalist whose work has appeared in FANGORIA, Rue Morgue Magazine, Screem Magazine, and on Cinedump.com. He is the author of "Remembering Vanessa," the first published biography of British horror star Vanessa Howard, printed in the Spring 2014 issue of Screem Magazine. From 2015 to 2017, he served as the assistant editor of Cinedump.com. Since 2017, he has served as staff writer for FANGORIA magazine. His first novel, Our Lady of the Inferno, was the recipient of the Independent Publisher Book Award for Horror and was named one of Bloody Disgusting's 10 Best Horror Books of 2018. Twitter: @PrestonFassel‍